Submitted Successfully!
Thank you for your contribution! You can also upload a video entry related to this topic through the link below:
https://encyclopedia.pub/user/video_add?id=3661
Check Note
2000/2000
Epigenomics in osteoporosis
Edit
Upload a video
This entry is adapted from 10.3390/ijms21249455

Osteoporosis is a complex multifactorial condition of the musculoskeletal system. Osteoporosis and osteoporotic vertebral fracture (OVF) are associated with high medical costs and can lead to poor quality of life. Genetic factors are important in determining bone mass and structure, as well as any predisposition for bone degradation and OVF. However, genetic factors are not enough to explain osteoporosis development and OVF occurrence. Epigenetics describes a mechanism for controlling gene expression and cellular processes without altering DNA sequences. The main mechanisms in epigenetics are DNA methylation, histone modifications, and non-coding RNAs (ncRNAs). Recently, alterations in epigenetic mechanisms and their activity have been associated with osteoporosis and OVF.

Osteoporosis and osteoporotic fractures are associated with high medical costs and can lead to poor quality of life. Osteoporotic fractures can happen from minor trauma, such as slipping or falling. Worldwide, osteoporotic vertebral fracture (OVF) is the most frequent type of osteoporotic fracture [1][2][3][4]. OVF increases in incidence with age and women and is associated with an increased risk of death [2]. Osteoporosis and OVF are influenced by a multifactorial environment, including genetic factors [5][6][7]. Osteoporosis is generally thought to be caused by a reduction in the number of osteoblasts along with preferential differentiation to fat cells in the aged skeleton [3][4]. This may decrease the quantity and functionality of osteoblasts and increase bone marrow fat in aged bones [3][8]. This can result in a reduction in bone formation and bone microarchitecture, leading to additional vertebral fractures and interfering with bone healing and remodeling after fracture [3][9].

Fracture healing reproduces skeletal development and growth with intricate interactions between cells, growth factors, and extracellular matrices. There are usually four stages to fracture repair: (1) inflammation, (2) soft callus formation, (3) hard callus formation, and (4) remodeling (Figure 1) [10]. Each stage is associated with specific cellular and molecular events [11][12][13]. However, in practice, the events are insufficiently described, and there can be extensive redundancies across the different stages. Further, studies over many years have examined the molecular and cellular forces driving the central process [14][15][16]. When considering cellular processes, vascular cells, inflammatory cells, osteochondral precursors, and osteoclasts maintain an important role in the bone repair process. When considering molecular processes, fracture repair is helped by inflammation-promoting cytokines and three main factors: osteogenesis-promoting factor, growth factor, and angiogenesis factor [17]. These factors help set up relevant morphogenetic disciplines by promoting growth or differentiation and recruiting cells. After that, the damaged soft tissue undergoes a repair and the fracture is covered by soft callus and, subsequently, hard callus. 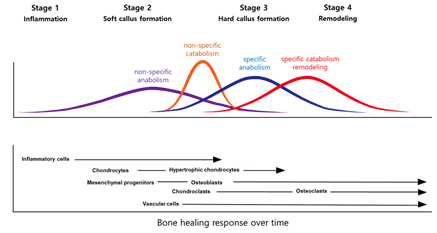 In the final stage of the fracture healing process, remodeling the bone-hardening callus into original cerebellar and cortical structures occurs, and is also known as secondary osteoplasty [13]. This bone remodeling process destroys mineralized bone followed by bone matrix formation that then becomes mineralized. This resorption and formation of bone are highly connected, allowing for skeletal integrity. However, with some pathological conditions such as osteoporosis, bone remodeling steps can uncouple, which can lead to increased fragility and decreased bone strength [18]. To sustain homeostasis of the bone mass, the remodeling of bone integrates extremely regulated steps that rely on the roles and interactions of the osteoblastic and osteoclastic lineages (Figure 2). 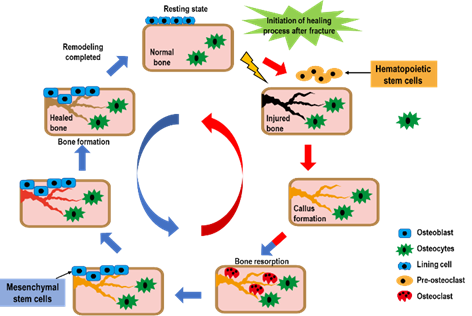 Figure 2. The bone healing process after a fracture. Bone remodeling after fracture is initiated by osteoclast activation, and it solubilizes the bone mineral and degrades the matrix. Osteoclasts originate from hematopoietic stem cells which fuse to form multinucleated cells (activated form of osteoclasts). Monocytes/macrophages remove debris, followed by a bone formation phase performed by osteoblasts, producing osteoid matrix which will mineralize.

Bone cell activation and differentiation are regulated at the molecular level by an intricate signaling network that contains systemic hormones and local secreted molecules. It is well known that many probabilistic and environmental stresses can be modulated through phylogenetic determination and gene expression [19][20][21]. Pathological processes for osteopathy with many factors, such as osteopenia or osteoporosis, can have crucial epigenetic elements. Epigenetic elements can present promising areas of research linking disease risk to genetics and gene expression. New treatment for OVF can be developed in virtue of a greater understanding of epigenetic and molecular regulation of bone cell function and differentiation.

Recently, a new paradigm of epigenetics has advanced. New discipline attempts to identify the delivery of stable phenotypes without altering DNA sequences due to interactions between the genome and internal and external environments. Within epigenetic mechanisms, those that are notable are modifications of histones, DNA methylation, and non-coding RNAs (Figure 3) [22]. Epigenetics can control transcription activity without altering DNA sequences [23] through an enzymatic alteration of 5-cytosine in DNA [24], microRNA [25], histone modifications [26], and remodeling of chromatins. DNA methyltransferases (DNMT) can catalyze methylation of CpG islands of DNA, which can weaken genome stability and reduce the activity of gene transcription [27]. MicroRNA (miRNA) can interrupt mRNA targets and reduce the translation of protein. In addition, it can initiate a post-transcriptional signaling pathway and promote the expression of protein [28][29]. Histone acetyltransferases (HATs) can control histone acetylation, which is necessary to maintain transcription; however, histone deacetylases (HDACs) can eliminate acetyl group from histones, which can favor the formation of heterochromatin to repress the activity of promoters [30]. 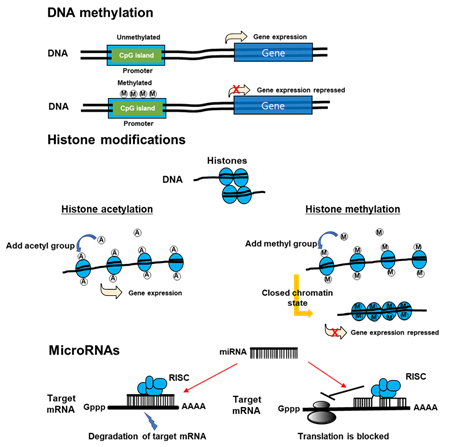 Figure 3. The mechanisms of epigenetics. DNA methylation inhibits DNA transcription. Histone modification, which modifies the interaction of DNA with histones or other DNA-binding protein complexes, regulates gene expression in a more dynamic and changing manner than does DNA methylation. Non-coding RNAs may be large (>200 nucleotides) or small (18–200 nucleotides). mRNA is one of the small non-coding RNAs. miRNAs suppress gene expression by selectively binding to the 3′ non-coding region (3′UTR) of their mRNA targets through base-paring. miRNAs can negatively regulate gene expression by two different post-transcriptional mechanisms. RISC: RNA induced silencing complex.

Histone methyltransferases catalyze the methylation of histone lysine residues to repress transcription of the gene [31]. Histone demethylases can eliminate the methyl group from lysine, which reverses the transcription of the gene [32]. Beyond enzymatic modification, some metabolites, including succinate, butyrate, and propionate, can trigger histone butyrylation, propionylation, succinylation, and crotonylation [33]. A collective review is necessary of the medical role of mRNA, methylated DNA, and histone modification for bone metabolism and osteoporosis occurrence. This article highlights how DNA methylation, histone modification, and non-coding RNA affect osteoporosis, bone remodeling, and treatment of OVF.

Noncoding RNA research, particularly in the musculoskeletal area, is still an unexploited field with a new class being updated regularly. Within the non-coding RNA area, microRNA (miRNA) is the most studied category. miRNA is a small non-coding RNA molecule (containing about 22 nucleotides) found in plants, animals, and some viruses, that modulates gene expression. RNA interference is a powerful mechanism for gene silencing, underlying many aspects of eukaryotic biology. At the molecular level, RNA interference is mediated by a ribonucleoprotein complex called RNA-induced silencing complex (RISC) and can be programmed to target virtually all nucleic acid sequences for silencing. RISC’s ability to find target RNA has been adopted many times in evolution, producing a wide range of gene silencing pathways [34]. Several new functions of miRNAs have been proposed, and several novel classes of larger noncoding RNA with a crucial transcriptional role have been recently demonstrated, including small interfering RNA (siRNA), Piwi-interacting RNAs (piRNAs), long non-coding RNAs (lncRNA), and others (Table 1) [35].

Table 1. The various non-coding RNAs (ncRNA) and their characteristics.

miRNAs are small, non-coding RNA molecules. The size of mature miRNAs ranges between 21–23 nucleotides. Their role is to modulate gene expression by post-transcriptional silencing, either by moderating the cleavage of a targeted transcript or by translational inhibition. In addition, miRNA is involved in the epigenetic regulation of bone remodeling (Table 2 and Figure 3).

Table 2. The pathway/affected molecule of miRNAs and their effects on bone biology. 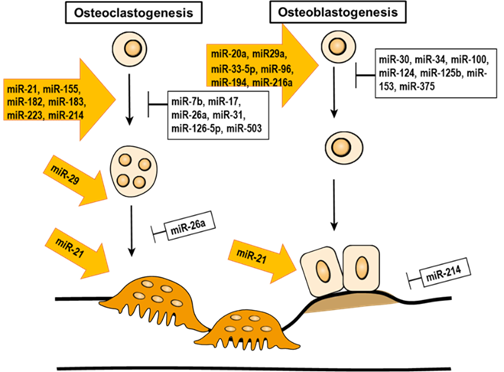 Figure 4. The epigenetic regulation of miRNA in bone remodeling.

RUNX2 is a central transcription factor that regulates osteogenesis, particularly osteoblast differentiation, as previously described. The genomic target of RUNX2 is osteoblast-specific cis-acting element 2 (OSE2), an approximately 18-bp, highly conserved DNA sequence located in the promoter region of many osteogenic genes, such as secreted phosphoprotein 1 (SPP1), collagen 1 alpha 1 (COL1A1), alkaline phosphatase (ALP), and others [36]. Beyond the epigenetic controls of RUNX2 transcription, many miRNAs have been shown to be activators or attenuators of its expression. Lineage progression in osteoblast and chondrocyte is strictly controlled by a cell fate-determining transcription factor, RUNX2. During osteogenesis differentiation and cartilage formation, miRNAs (miR-23a, miR-30c, miR-34c, miR-133a, miR-135a, miR-137, miR-204, miR-205, miR-217, miR-218, and miR-338) are generally reversely expressed to RUNX2. All RUNX2 targeting miRNA (except miR-218) significantly inhibits osteoblast differentiation and can reverse its effect by corresponding anti-miRNA [37]. Attenuation of miRNA in protein translation has emerged as a crucial regulator of mesenchymal cell differentiation into osteoblast lines. The deletion of the dicer enzyme in the osteogenesis factor by Col1a1-Cre hindered the survival of the fetus after E14.5. This suggests that dicer-generated miRNA is essential for promoting prenatal osteoblast differentiation and suppressing bone development in adults [38].

The lncRNAs, large non-coding RNAs > 200 nucleotides in length, play crucial roles in many activities of life [51], such as epigenetic regulation, dose compensation effects, and regulation of cell differentiation (Table 3). Abnormalities of lncRNAs can cause disease, and many reports have demonstrated that lncRNAs are closely associated with the underlying mechanism in the pathogenesis of osteoporosis.

Table 3. The pathway/affected molecule or lncRNAs and their effects in bone biology.

3. The Possibility of Epigenetics in Treatment of Osteoporosis and OVF

The epigenetic effects on bone formation and remodeling reactions may facilitate the development of epigenetic therapeutics with the potential to treat osteoporosis and OVF. A large variety of proof-of-concept studies have demonstrated the remedial effects of miRNA and epigenetic modifiers in slowing osteoporosis development. A recombinant adeno-associated virus serotype 9 (rAAV9) can deliver artificial miRNA (amiR) to osteoclast cells of patients/animals with osteoporosis to silence expression of RANK and cathepsin K (rAAV9.amiR-rank, rAAV9.amiR-ctsk), which are major osteoporosis regulators. Because rAAV9 is very effective for the transduction of osteoclasts, systemic administration of rAAV9 with amiR rank or amiR-ctsk results in a significant increase in bone mass in mice. rAAV9.amiR-ctsk suppresses bone loss and improves bone mechanical properties in postmenopausal and senile osteoporosis mouse models [71]. A circulating miR-338 cluster in the serum could maintain bone formation capacity and increased bone mass and trabecular structure in an osteoporosis mouse model [72]. miR-672-5p induced osteoblast differentiation and mineralization in ovariectomized mice [73]. Histone methyltransferase DOT1L inhibition decreases osteoclastic activity, which can delay osteoporosis progression [74]. The knockdown of EZH2 by lentivirus-expressing shRNA rescued the abnormal fate of osteoporotic MSC. The H3K27me3 inhibitor DZNep effectively derepressed Wnt signaling and improved osteogenic differentiation of osteoporotic MSCs in vitro [75]. DNA methylation inhibitor 5-aza-20-deoxycytidine improves bone mass in disuse-induced osteopenic bone development [76].

More
© Text is available under the terms and conditions of the Creative Commons Attribution (CC BY) license; additional terms may apply. By using this site, you agree to the Terms and Conditions and Privacy Policy.
Upload a video for this entry
Information
Subjects: Pathology
Contributor MDPI registered users' name will be linked to their SciProfiles pages. To register with us, please refer to https://encyclopedia.pub/register :
Inbo Han
View Times: 148
Revisions: 2 times (View History)
Update Time: 18 Dec 2020
Table of Contents
1000/1000
Hot Most Recent