+1 point
Thank you for your contribution! You can also upload a video entry related to this topic through the link below: https://encyclopedia.pub/user/video_add?id=36206
Check Note
2000/2000
James Gosling

Edit
Upload a video
The content is sourced from: https://handwiki.org/wiki/Biography:James_Gosling
java 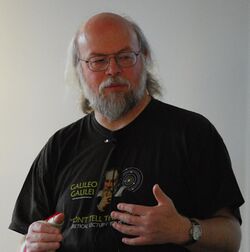 James Arthur Gosling, OC (born May 19, 1955) is a Canadian computer scientist, best known as the founder and lead designer behind the Java programming language.[1]

James Gosling received a Bachelor of Science from the University of Calgary [2] and his M.A. and Ph.D. from Carnegie Mellon University, all in computer science.[3][4][5] He wrote a version of Emacs called Gosling Emacs (Gosmacs) while working toward his doctorate. He built a multi-processor version of Unix for a 16-way computer system[6] while at Carnegie Mellon University, before joining Sun Microsystems. He also developed several compilers and mail systems there.

Gosling was with Sun Microsystems between 1984 and 2010 (26 years). He is known as the father of the Java programming language.[7][8] He got the idea for the Java VM while writing a program to port software from a PERQ by translating Perq Q-Code to VAX assembler and emulating the hardware. He left Sun Microsystems on April 2, 2010 after it was acquired by the Oracle Corporation,[7] citing reductions in pay, status, and decision-making ability, along with change of role and ethical challenges.[9] He has since taken a very critical stance towards Oracle in interviews, noting that "during the integration meetings between Sun and Oracle, where we were being grilled about the patent situation between Sun and Google, we could see the Oracle lawyer's eyes sparkle."[8] He clarified his position during the Oracle v Google trial over Android: "While I have differences with Oracle, in this case, they are on the right. Google totally slimed Sun. We were all really disturbed, even Jonathan Schwartz; he just decided to put on a happy face and tried to turn lemons into lemonade, which annoyed a lot of folks on Sun."[10] However, he approved of the court's ruling that APIs should not be copyrightable.[11]

He is an adviser at the Scala company Lightbend,[15] Independent Director at Jelastic,[16] and Strategic Advisor for Eucalyptus,[17] and is a board member of DIRTT Environmental Solutions.[18]

He is known for his love of proving "the unknown" and has noted that his favorite irrational number is √2. He has a framed picture of the first 1,000 digits of √2 in his office.[19]

Gosling initially became known as the author of Gosling Emacs, and also invented the windowing system NeWS, which lost out to X Window because Sun did not give it an open source license. He is generally credited with having invented the Java programming language in 1994.[20][21][22] He created the original design of Java and implemented the language's original compiler and virtual machine.[23] Gosling traces the origins of the approach to his early graduate-student days, when he created a p-code virtual machine for the lab's DEC VAX computer, so that his professor could run programs written in UCSD Pascal. In the work leading to Java at Sun, he saw that architecture-neutral execution for widely distributed programs could be achieved by implementing a similar philosophy: always program for the same virtual machine.[24]

For his achievement, the National Academy of Engineering in the United States elected him as a Foreign Associate member.[25] Another contribution of Gosling's was co-writing the "bundle" program, a utility thoroughly detailed in Brian Kernighan and Rob Pike's book The Unix Programming Environment.