+1 point
Thank you for your contribution! You can also upload a video entry related to this topic through the link below: https://encyclopedia.pub/user/video_add?id=36101
Check Note
2000/2000
Crash Boats of World War 2

Edit
Upload a video
The content is sourced from: https://handwiki.org/wiki/Engineering:Crash_boats_of_World_War_2

Crash boats, at the time known as "aircraft rescue boat" or "air-sea rescue boat" were wooden speedboats built to rescue the crew of downed United States and other Allies aircraft during World War II. US boats came from observation of British experience with High-speed launches during the Battle of Britain. By the end of World War II America had produced 300,000 planes, creating a need to have crash rescue boats stationed around the globe. These boats were fast boats used to rescue pilots, crew and passengers from downed aircraft in search and rescue, air-sea rescue missions. The boats would race out to a crash site and rescue wounded aircrew. Some speed boats built before the war were acquired and converted to be crash boats and many new boats were built. Standard crash boats were built in four lengths for World War II. The smallest standard size boat was 42 feet long. The larger boats were 63 or 85 or 104 feet long. They were built for the Army Air Forces, US Navy and some were transferred to Allies. The design was similar to patrol boats built for the war, but with less or no armament and first aid equipped. The boats were designed to be light and fast to be able to get to the downed aircrew as fast as possible. Most were used in the Pacific war across the vast South Pacific, in the Island hopping campaign. Some were station on the West Coast of the United States to support the vast training centers. Many were designated Air Rescue Boats or ARB or AVR or P or C or R Hull classification symbol. After the war most were abandoned or destroyed, a few served in the Korean war (with United States Air Force ), some sold to private and some donated to Sea Scouts. 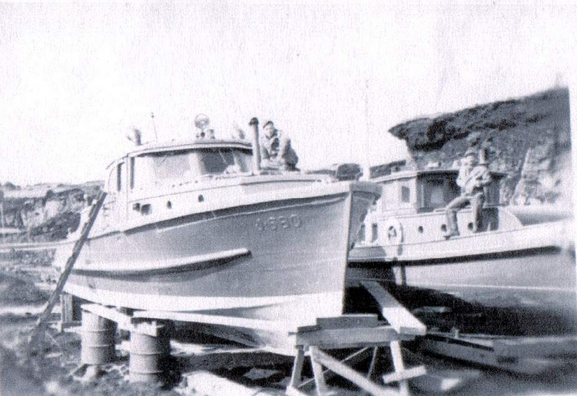 The 42 foot crash rescue boat were built for Army Air Forces Air-Sea-Rescue. The 42-foot (13 m) boat used design 221, with twin gasoline-powered engines, with two screws. These used two Hall-Scott/Hudson Invader Marine Engine or a Kermath Sea Ranger 6 Marine engine. Due to the small size, these were used in close-to-shore rescue. The boat had no armament. The 42-foot boats were built by Hunt Boat Company, in Richmond, California, Palmer Scott & Company in New Bedford, Massachusetts and Palmer Johnson Yachts in Sturgeon Bay, Wisconsin.[1] 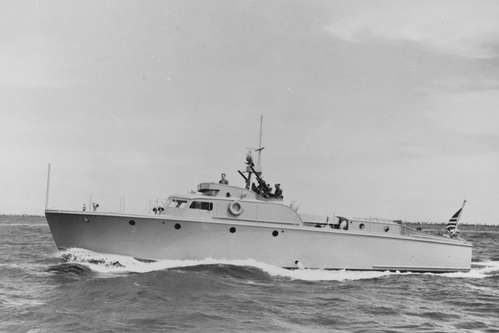 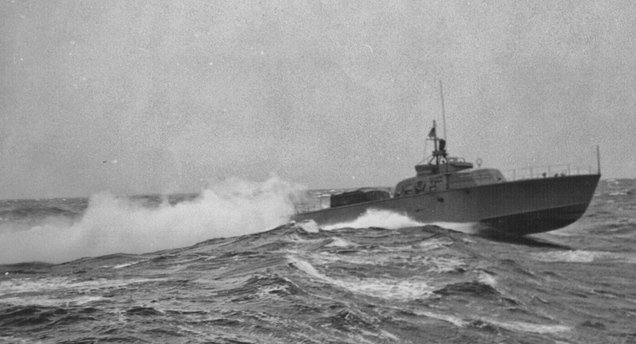 The 85-foot crash boats are known as the ASR-85s or Class II boats. ASR-85s are known for having both speed and range, able to recover downed crews several hundred miles offshore. The 140 built 85-foot (26 m) crash boats are powered with two 1,500 hp (1,100 kW) Packard Marine 4M-2500 engines, with a top speed of 40 knots (74 km/h; 46 mph), a range of 2,500 miles. ASR 85 boats used 140 gallons per hour of 87-91 octane gasoline, tender ships would refuel and restock boats not stationed at harbors. Boats had no armament or were armed with twin 50 caliber machine guns and a 20 mm Oerlikon anti-aircraft gun. The ASR-85s had a crew of 12 men: one master, two engineers, one first mate, one navigator, one radio operator. three Able seaman, one oiler; one Emergency medical technician; and one cook, but cross training on these small boats was mandatory. ASR-85s were built by 14 shipyards: Wilmington Boat Works in Wilmington, California, Peterson Builders and Simms Bros. in Dorchester, Boston, Herreshoff Manufacturing in Bristol, Rhode Island, Burger Boat in Manitowoc, Wisconsin, Dooley's Basin & Dry Dock in Fort Lauderdale, Florida, Cambridge Shipbuilding in Cambridge, Maryland; Daytona Beach Boat Works in Daytona Beach, Florida; Eddy Shipbuilding in Bay City, Michigan; Henry B. Nevins, Incorporated in City Island, Bronx; Peterson, Julius in Nyack, New York; Robinson Marine in Benton Harbor, Michigan; Truscott Boat & Dock Co. in St. Joseph, Michigan and Fellows & Stewart in San Pedro, California. Example: AVR 661 placed on the U.S. National Register of Historic Places as#80001342 in 1980.[14][15] [16][17][18] P-550 is the only restored to original 104s crash boat. P-250 was stationed at Avila Beach, California for World war 2, supporting training at Amphibious Training Base Morro Bay and other training camps and airfields near San Luis Obispo like Camp San Luis Obispo. P-520 then served in the Korean War from 1950 to 1952. P-250 was built by Casey Boat Builders in 1943.[19][20] [21][22] [23][24][25] 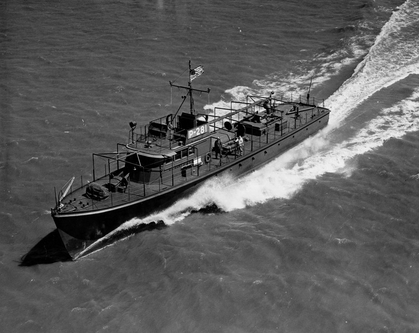 The largest of the crash boats, the 104-foot crash boats are also called "Class I" boats or 104s. The 104-foot (32 m) used Design 235, were built with emergency medical facilities which could accommodate up to 23 people. The crew of 12 were all cross-trained to operate any part of the boat. The boats have a length of 104 ft (32 m), powered by three 625 hp (466 kW) Kermath V12 engines, 3 screws. The boat had a top speed of 18 knots (33 km/h; 21 mph). The 104-foot was large enough to operate in the open ocean easily. Some 104-foot worked in the Gulf of Alaska and Aleutian Islands, these had cold weather options installed. The cold weather options had a heating system, ice protection on the hull, insulation. Many of the 104-foot boats served in the South Pacific and the Caribbean. The 104-foot boats were built by Dooley's Basin & Dry Dock; Casey Boat Builders in Fairhaven, MA; Ventnor Boat Works of Atlantic City, NJ; Dachel-Carter Shipbuilding, Benton Harbor, MI; Brownsville Boat of Brownsville, TX; Sagstad Shipyard, Seattle, WA.; Stephens Brothers of Stockton, CA. Example MV Christmas Seal.[26][27][28][29][30] 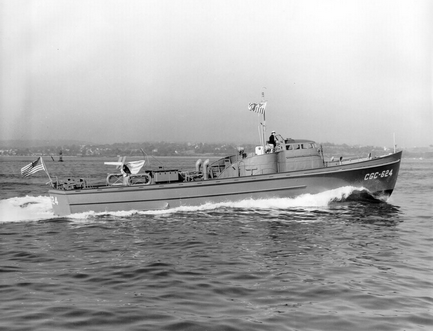 Hall Scott Defender powered most 63-foot Rescue Boats. The Hall Scott Defender is a straight-six engine with overhead valves and two spark plugs per cylinder. The engine uses two updraft carburetors. The first run of 1996 CID had 575 hp, the next run was supercharged and bored and had 700 hp.[39][40]

More
©Text is available under the terms and conditions of the Creative Commons-Attribution ShareAlike (CC BY-SA) license; additional terms may apply. By using this site, you agree to the Terms and Conditions and Privacy Policy.
Upload a video for this entry
Information
Subjects: Transportation Science & Technology
Contributor MDPI registered users' name will be linked to their SciProfiles pages. To register with us, please refer to https://encyclopedia.pub/register :
HandWiki
View Times: 10
Entry Collection: HandWiki
Revisions: 2 times (View History)
Update Time: 23 Nov 2022
Table of Contents
1000/1000
Hot Most Recent