+1 point
Thank you for your contribution! You can also upload a video entry related to this topic through the link below: https://encyclopedia.pub/user/video_add?id=36089
Check Note
2000/2000
Jupiter (Rocket Family)

Edit
Upload a video
The content is sourced from: https://handwiki.org/wiki/Engineering:Jupiter_(rocket_family)

The Jupiter family of super heavy-lift launch vehicles was part of the proposed DIRECT Shuttle-Derived Launch Vehicle architecture. It was intended to be the alternative to the Ares I and Ares V rockets which were under development for the US Project Constellation. Major benefits were projected from re-using as much hardware and facilities from the Space Shuttle program as possible, including cost savings, experience with existing hardware, and preserving the workforce. 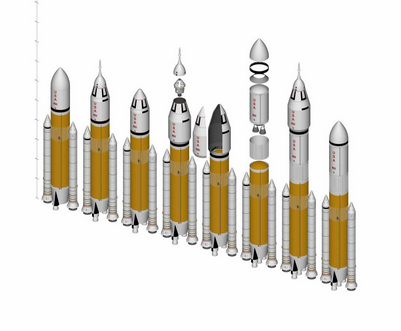 Some envisioned Jupiter configurations, including crew and cargo variants. https://handwiki.org/wiki/index.php?curid=1494309

Jupiter was designed to be a high-commonality family of rockets, adapted closely from existing Shuttle systems. Each Jupiter launch vehicle would use a "common core stage" consisting of a tank structure based closely on the existing Space Shuttle External Tank with a pair of standard four-segment Solid Rocket Boosters (SRBs) mounted at the sides as on the Space Shuttle. Up to four Space Shuttle Main Engines (SSMEs) from the Space Shuttle Orbiter would be attached to the bottom of the tank and would be expended along with the tank. For heavier payloads a proposed Jupiter Upper Stage (JUS) would be added atop the tank structure. For extra-planetary expeditions, the JUS would serve in a role similar to the Earth Departure Stage planned for Ares V. DIRECT purposefully specified existing components for the launch vehicles, but contended that improvements such as the more powerful five-segment SRB or the J-2X upper stage engine could have been incorporated.

Crews would be carried atop the launch vehicle in NASA's planned Orion Crew Exploration Vehicle. Cargo, whether carried under Orion or alone on a cargo-only launch, would be enclosed by a payload fairing.

Many configurations of Jupiter were projected, with the May 2009 DIRECT version 3.0 proposal recommending two: the Jupiter-130 and Jupiter-246, with claimed lift capacities exceeding 60 and 90 tonnes (t), respectively, to low Earth orbit.[1]. 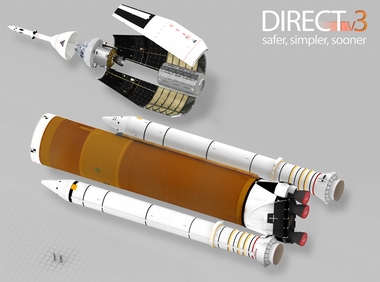 DIRECT proposed that the Jupiter-130 be the first configuration developed, with the goal of becoming operational within four years of the start of the development program. The Jupiter-130 would have consisted of the Jupiter common core stage with one SSME removed, no upper stage, and a payload fairing on top. "130" stands for one cryogenic core stage, three main engines, and zero upper-stage engines. Initial launches would rotate crews and bring cargo to the International Space Station, a function carried out by Soyuz rockets at the time.

DIRECT calculations indicated that the Jupiter-130 would have been able to deliver between over 60 t and over 70 t of cargo or cargo and crew to a variety of circular and elliptical inclined low Earth orbits.[1] When the mass of the proposed Orion spacecraft and crew is subtracted (18 - 22 t depending on the mission[2]), the remainder compared favorably with the approximately 25 t cargo capacity of the Space Shuttle, and the lack of capacity of Ares I besides the Orion spacecraft.

Because the Jupiter-246 would have used four SSMEs on propellant tanks originally sized for three engines, the core stage propellant would be depleted before achieving low Earth orbit, and a large capacity upper stage would deliver payload into orbit. Launched with a partial upper stage propellant load of 75 t, a Jupiter-246 could deliver over 84 t of crew and cargo to a circular 241 km (130 nmi), 29° inclined orbit.[3] Launched with no crew or payload, the same 75 t of propellant could deliver an additional 100 t of propellant to the same orbit.[4] The total JUS capacity was to be approximately 175 t. For lunar missions where the JUS is to serve as the Earth departure stage, a full load of 175 t of propellant would be launched and 75 t would be consumed in achieving low Earth orbit, leaving 100 t available for the Earth departure burn.

In line with the DIRECT v3.0 theme of using as much existing hardware as possible, DIRECT proposes the veteran RL10 engine family to power the JUS. However, DIRECT anticipated similar performance for its upper stage from the J-2X engine, previously under development for the Ares I and Ares V upper stages.

One of the primary goals of the DIRECT proposal is to develop a new heavy lift rocket in a shorter time frame. When the DIRECT project began in 2006, the Shuttle was expected to be operational for another four years or so. DIRECT was planned to use the four-segment Solid Rocket Booster (SRB) unchanged from the Shuttle and to make use of work already underway for the Constellation Project on the RS-68 main engine and J-2X upper stage engine.

By 2009, however, there were concerns that the ablatively-cooled RS-68 engine could not survive the intense heat from the nearby SRBs. With this worry and with Shuttle retirement imminent, the DIRECT v3.0 proposal called for using the more expensive regeneratively-cooled, reusable Space Shuttle Main Engine (SSME) in a disposable role. Three or four SSMEs attached to the bottom of the core tank structure would be discarded in Earth's atmosphere along with the tank. For missions beyond lower Earth orbit, the Jupiter Upper Stage would use six Pratt and Whitney RL10B-2s.

Before it could be launched, NASA's proposed Ares I rocket would have required both a new, modified five-segment version of the Space Shuttle SRB and the J-2X upper stage engine, a modification of the J-2 engine used on the Saturn V. The proposed Jupiter family could have launched with currently available engines, with the ability to upgrade to a more powerful SRB and J-2X upper stage engine should they become available.

DIRECT envisioned continued development and operation of NASA's Orion crewed spacecraft, including its Launch Abort System (LAS). In the event of an emergency, the LAS would pull the crew capsule to safety as it would on NASA's Ares I. The DIRECT Team asserted, however, that the Jupiter-130's greater lift capacity - 64 tonnes, versus 25 tonnes for Ares I - would enable the Orion to be designed with more crew safety capability than was planned.

For crewed flights to the International Space Station (ISS), DIRECT said the added lift capacity of the Jupiter would allow significant cargo to be carried in a separate module mounted below the Orion spacecraft. Once orbit was reached, the Orion would dock with this module and ferry it to the ISS. By comparison, Ares I would be capable of bringing only the Orion spacecraft to the ISS. DIRECT asserted that flying Orion and a separate payload module on a Jupiter would satisfy the safety concerns raised about flying crew separately from cargo following the 2003 Space Shuttle Columbia disaster, since the Orion capsule would still be able to separate from the launch vehicle and any cargo in the event of a launch abort.

Jupiter vs. Ares I

The DIRECT Team cited a number of particular features that were claimed to make a Jupiter-130 safer than the Ares I:

The Jupiter design would re-use the proven method of Space Shuttle of attaching the SRBs to the tankage though an internal structural member. DIRECT says this would avoid the inducing of potentially severe vibration in the vehicle, resulting from a "thrust oscillation" effect endemic in large solid rockets. This effect became a concern for the Ares I.[5]

As with the Space Shuttle, the liquid main engines of a Jupiter-130 would be ignited on the ground and undergo a rapid checkout before SRB ignition and launch. Start-sequence problems could be detected before committing to the launch, and the only vehicle staging event would be the burnout and separation of the SRBs. By comparison, the Ares I launch consists of the immediate ignition of its single SRB first stage, then requires a staging event and ignition at altitude of its cryogenic second stage. While staging is common launch vehicle practice, it introduces safety, risk and reliability concerns, particularly on crewed flights. (The larger Jupiter-246, with its upper stage, would typically include this risk.)

The DIRECT Team asserted that the Jupiter-130 and -246, with their multiple main engines, would be capable of reaching orbit even in the event of an engine shutdown.

In the Jupiter concept, the crewed Orion spacecraft would be supported by a large aerodynamic fairing. This arrangement would place the Orion at least 10 m (33 ft) further away from propellant-filled stages than it would be on an Ares I. DIRECT asserted this would provide a valuable additional "buffer space" between an exploding vehicle and the crew.

The envisioned lift capacity of the Jupiter-130 could allow protective hardware to be mounted inside the payload fairing, below the Orion spacecraft. DIRECT postulated mounting a lightweight shield made from boron carbide and Kevlar between the spacecraft and the stages below to help protect the crew from shrapnel and other debris from a vehicle explosion.

More
©Text is available under the terms and conditions of the Creative Commons-Attribution ShareAlike (CC BY-SA) license; additional terms may apply. By using this site, you agree to the Terms and Conditions and Privacy Policy.
Upload a video for this entry
Information
Subjects: Transportation Science & Technology
Contributor MDPI registered users' name will be linked to their SciProfiles pages. To register with us, please refer to https://encyclopedia.pub/register :
HandWiki
View Times: 7
Entry Collection: HandWiki
Revision: 1 time (View History)
Update Time: 23 Nov 2022
Table of Contents
1000/1000
Hot Most Recent