+1 point
Thank you for your contribution! You can also upload a video entry related to this topic through the link below: https://encyclopedia.pub/user/video_add?id=36022
Check Note
2000/2000
Let's Encrypt

Edit
Upload a video
The content is sourced from: https://handwiki.org/wiki/Organization:Let%27s_Encrypt

Let's Encrypt is a certificate authority that provides X.509 certificates for Transport Layer Security (TLS) encryption at no charge. The certificate is valid for 90 days, during which renewal can take place at anytime. The offer is accompanied by an automated process designed to overcome manual creation, validation, signing, installation, and renewal of certificates for secure websites. It launched on April 12, 2016. The project claims to make encrypted connections to World Wide Web servers ubiquitous. By eliminating payment, web server configuration, validation email management and certificate renewal tasks, it is meant to significantly lower the complexity of setting up and maintaining TLS encryption. On a Linux web server, execution of only two commands is sufficient to set up HTTPS encryption and acquire and install certificates. To that end, a software package was included into the official Debian and Ubuntu software repositories. Current initiatives of major browser developers such as Mozilla and Google to deprecate unencrypted HTTP are counting on the availability of Let's Encrypt. The project is acknowledged to have the potential to accomplish encrypted connections as the default case for the entire web. Only domain-validated certificates are being issued, since they can be fully automated. Organization Validation and Extended Validation Certificates are not available. By being as transparent as possible, they hope to both protect their own trustworthiness and guard against attacks and manipulation attempts. For that purpose they regularly publish transparency reports, publicly log all ACME transactions (e.g. by using Certificate Transparency), and use open standards and free software as much as possible. Support of ACME v2 and wildcard certificates was added in March 2018.

Let's Encrypt is a service provided by the Internet Security Research Group (ISRG), a public benefit organization. Major sponsors are the Electronic Frontier Foundation (EFF), the Mozilla Foundation, OVH, Akamai, and Cisco Systems. Other partners include the certificate authority IdenTrust, the University of Michigan (U-M), the Stanford Law School, the Linux Foundation[1] as well as Stephen Kent from Raytheon/BBN Technologies and Alex Polvi from CoreOS.[2]

The challenge–response protocol used to automate enrolling with this new certificate authority is called Automated Certificate Management Environment (ACME). It involves various requests to the web server on the domain that is covered by the certificate. Based on whether the resulting responses match the expectations, control of the enrollee over the domain is assured (domain validation). In order to do that, the ACME client software sets up a special TLS server on the server system that gets queried by the ACME certificate authority server with special requests using Server Name Indication (Domain Validation using Server Name Indication, DVSNI).

The validation processes are run multiple times over separate network paths. Checking DNS entries is provisioned to be done from multiple geographically diverse locations to make DNS spoofing attacks harder to do.

ACME interactions are based on exchanging JSON documents over HTTPS connections.[10] A draft specification is available on GitHub,[11] and a version has been submitted to the Internet Engineering Task Force (IETF) as a proposal for an Internet standard.[12] 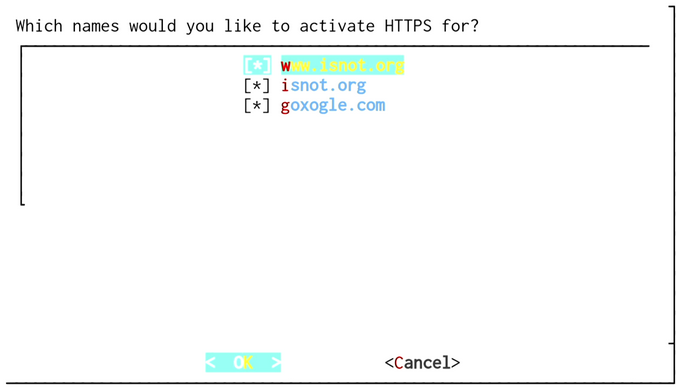 The certificate authority consists of a piece of software called Boulder, written in Go, that implements the server side of the ACME protocol. It is published as free software with source code under the terms of version 2 of the Mozilla Public License (MPL).[13] It provides a RESTful API that can be accessed over a TLS-encrypted channel.

An Apache-licensed[14] Python certificate management program called certbot (formerly letsencrypt) gets installed on the client side (the web server of an enrollee). This is used to order the certificate, to conduct the domain validation process, to install the certificate, to configure the HTTPS encryption in the HTTP server, and later to regularly renew the certificate.[2][15] After installation and agreeing to the user license, executing a single command is enough to get a valid certificate installed. Additional options like OCSP stapling or HTTP Strict Transport Security (HSTS) can also be enabled.[10] Automatic setup initially only works with Apache and nginx.

Let's Encrypt issues certificates valid for 90 days. The reason given is that these certificates "limit damage from key compromise and mis-issuance" and encourage automation.[16] The official certbot client and most of the third-party clients allow automation of the certificate renewal.

Several third-party client implementations in several languages were created by the community.[17]

The Let's Encrypt project was started in 2012 by two Mozilla employees, Josh Aas and Eric Rescorla, together with Peter Eckersley at the Electronic Frontier Foundation and J. Alex Halderman at the University of Michigan. Internet Security Research Group, the company behind Let's Encrypt, was incorporated in May 2013.[18]

On January 28, 2015, the ACME protocol was officially submitted to the IETF for standardisation.[20] On April 9, 2015, the ISRG and the Linux Foundation declared their collaboration.[1] The root and intermediate certificates were generated in the beginning of June.[6] On June 16, 2015, the final launch schedule for the service was announced, with the first certificate expected to be issued sometime in the week of July 27, 2015, followed by a limited issuance period to test security and scalability. General availability of the service was originally planned to begin sometime in the week of September 14, 2015.[21] On August 7, 2015, the launch schedule was amended to provide more time for ensuring system security and stability, with the first certificate to be issued in the week of September 7, 2015 followed by general availability in the week of November 16, 2015.[22] The cross-signature from IdenTrust is planned to be available when Let's Encrypt opens for the public.[5]

On September 14, 2015, Let's Encrypt issued its first certificate, which was for the domain helloworld.letsencrypt.org. On the same day, ISRG submitted its root program applications to Mozilla, Microsoft, Google and Apple.[23]

On October 19, 2015, the intermediate certificates became cross-signed by IdenTrust, causing all certificates issued by Let's Encrypt to be trusted by all major browsers.[4]

[*] Of which 3.8 million are unexpired and unrevoked. Their active certificates cover more than 7 million unique domains, in part due to support by large hosting companies.

More
©Text is available under the terms and conditions of the Creative Commons-Attribution ShareAlike (CC BY-SA) license; additional terms may apply. By using this site, you agree to the Terms and Conditions and Privacy Policy.
Upload a video for this entry
Information
Subjects: Others
Contributor MDPI registered users' name will be linked to their SciProfiles pages. To register with us, please refer to https://encyclopedia.pub/register :
HandWiki
View Times: 6
Entry Collection: HandWiki
Revision: 1 time (View History)
Update Time: 23 Nov 2022
Table of Contents
1000/1000
Hot Most Recent