+1 point
Thank you for your contribution! You can also upload a video entry related to this topic through the link below: https://encyclopedia.pub/user/video_add?id=35693
Check Note
2000/2000
Robert W. Hunt

Edit
Upload a video
The content is sourced from: https://handwiki.org/wiki/Biography:Robert_W._Hunt
metallurgical steel mechanical 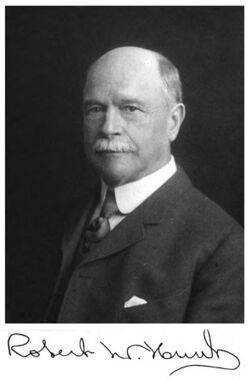 Born in Fallsington, Pennsylvania, he was the only son of Dr. Robert A. Hunt and Martha Lancaster Woolston.[1] His father, a graduate of Princeton College and University of Pennsylvania, was a practicing physician. However, health issues led to him leaving his practice and moving with his family to Covington, Kentucky where he ran a pharmacy store.[2] It was there that the young Hunt received his early education in the local public schools.[3] Hunt's father died in 1855, which required his son to leave school at the age of 18 and take over his father's business.[2]

With his health failing, in 1857 Robert W. Hunt had to sell the pharmacy business and then travel to Pottsville, Pennsylvania to recuperate. He became employed at the John Burnish & Company, an iron rolling mill in Pottsville,[2] where his cousin T. W. Yardley was a senior partner. At this mill he learned the skills of the iron working industry. In 1859 he joined Booth, Garrett & Reese, an analytical laboratory in Philadelphia,[4] where he took a course in analytical chemistry.[5] When his study was completed, in 1860 he joined Wood, Morrell & Co. as a chemist[5] and established an iron and steel works laboratory in Johnstown, Pennsylvania for the Cambria Iron Company.[1] By the spring of 1861, he was working as night foreman for the Elmira rolling mill in Elmira, New York.[5]

Once the American Civil War began in 1861, he joined the Pennsylvania Volunteer Infantry, where he rose in rank from Private to Captain and was placed in charge of Camp Curtin in Harrisburg, Pennsylvania during the fall of 1862. The following year he became the mustering officer for the state of Pennsylvania. In 1864 he helped recruit Captain Bruce Lambert's Independent Mounted Company, Pennsylvania volunteers. When the war ended in 1865, he was mustered out of the service with the rank of Sergeant; yielding the rank of Lieutenant to a friend.[6]

Returning to civilian life, in July 1865[7] he went to work for the Cambria Co. and was named superintendent of the experimental Bessemer steel works in Wyandotte, Michigan. This was the first Bessemer steel plant to be operated in the United States.[3] He remained in charge of the Wyandotte Bessemer Works until 1866, when he returned to Johnstown where the Cambria Co. was erecting a Bessemer plant.[4] Since the construction of this factory was not completed until July 1871,[7] Cambria placed Hunt in charge of the process of rolling steel ingots into rail tracks for use by the Pennsylvania Railroad. Once the Cambria Bessemer plant was put into operation, Hunt, along with John E. Fry and Alexander L. Holley introduced a new bottom casting method for which the three received a patent.[4]

Hunt remained with the Cambria Co. until September, 1873,[7] when he became superintendent of the Bessemer works of John A. Griswald & Company in Troy, New York. He would remain with Griswald's company until 1888.[7] In 1883 he was elected to serve a term as the president of the American Institute of Mining Engineers.[1] Moving to Chicago in the spring of 1888, he started the business of Messrs. Robert W. Hunt & Company in April, which engaged in the business of inspection, testing, and consultation.[1]

Hunt was married to Eleanor Clark in December, 1866; the couple would have no children.[9] His estate endowed the Hunt Professorship in Metallurgical Engineering at Rensselaer Polytechnic Institute.[8] The Robert W. Hunt Company continues to operate to this day, becoming a subsidiary of U.S. Laboratories Inc. in 2001.[10]