+1 point
Thank you for your contribution! You can also upload a video entry related to this topic through the link below: https://encyclopedia.pub/user/video_add?id=35625
Check Note
2000/2000
Marco Visconti

Edit
Upload a video
The content is sourced from: https://handwiki.org/wiki/Biography:Marco_Visconti
azrael thelema o.t.o. 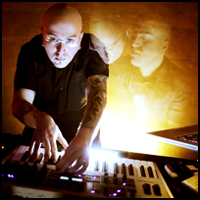 Marco Visconti (born 4 June 1978) is an Italian occultist and musician.[1] He is known for his work with the musical group XP8[2] and Faderhead.[3] Under the name Azrael[4] Visconti is an past officer[5] of the Thelemic organisation Ordo Templi Orientis (O.T.O.) in London,[6] and scholar of the occult works of English author Aleister Crowley, the founder of the philosophy and religion of Thelema.[7] Italian science-fiction author Francesco Dimitri pays tribute to Visconti’s underground persona through his signature character Dagon in La Ragazza dei miei Sogni,[8] of which a film adaptation was released in 2017, with Visconti-inspired character played by renowned actor Nicolas Vaporidis.

Visconti has been involved in the occult since the 1990s.[5] He was initiated into the Minerval degree of Ordo Templi Orientis at Khem Lodge in Rome, Italy.[11] During the next few years, he advanced through the Man of Earth degrees of O.T.O., completing the Triad at AMeTh Lodge in London, UK, where he moved in early 2013[7], and serving as the Lodge's Treasurer (one of the 3 permanent Officer roles) for several years[12]. In 2015 he war ordained a Deacon in the Ecclesia Gnostica Catholica.[5] However, following months of heated debate about alleged abuse in the Order perpetrated at every level of the organisation[13], Visconti decided to resign from it, telling his version of the story on his own website, in a diary-like blog called The Wasteland[14].

Visconti is a Freemason[15] belonging to the United Grand Lodge of England and several successive orders, such as the Holy Royal Arch and the Ancient and Accepted Rite for England and Wales and its Districts and Chapters Overseas.

In the early 2000s he collaborated with Labirinto Stellare, a small independent press, to translate the works of Michael Bertiaux and Kenneth Grant in Italian.

A member of gothic metal band Morgana’s Kiss sometime during the late ’90s, in 2001 Visconti formed XP8, an electronic band drawing inspiration by genres such as EBM, synthpop and hard dance.[16] Other members of the band included Marko Resurreccion and Paul Toohill.[17] In 2006, Visconti joined two other projects, Unter Null (this partnership will only last few months), and Grendel, as member of the live lineup of each band.[18] 2007 is the year that saw him playing for VNV Nation on their "Judgement World Tour".[19] A year later, in 2008, he started working with Faderhead,[20] as well as becoming a staple to the live lineup;[21] while in 2009 Visconti ended his collaboration with Grendel, to focus only on XP8 and Faderhead.[22]

He continued writing music for the XP8’s songs as well as working on band’s synth production and arrangements till the band's split in 2014,[23] when everything came to a grinding halt. Quoting various reasons for this decision, among them the dwindling interest in alternative/industrial dance music, a trend that had a long run for almost two decades but that eventually ran dry. In an interview, Visconti also stated that “[...] no one wants to be the old guy in a room full of kids looking at you like a dinosaur: I remember vividly making fun of those old goths that simply didn’t want to get the fuck out of MY clubs a decade ago, and the last thing I wanted to become was one of them.” [24] - clearly pointing out the necessity to make space for a younger generation to make things vital and vibrant once again.

After the split of XP8, Visconti continued working as a DJ until April 2015, when he decided to go on hiatus from the music scene after a final set at Sheffield's Resistanz Festival.[25]