+1 point
Thank you for your contribution! You can also upload a video entry related to this topic through the link below: https://encyclopedia.pub/user/video_add?id=35528
Check Note
2000/2000
Gun Carrier Mark I

Edit
Upload a video
The content is sourced from: https://handwiki.org/wiki/Engineering:Gun_Carrier_Mark_I

The Gun Carrier Mark I was the first piece of self-propelled artillery ever to be produced, a British development from the First World War. Gun carriers were first used in the Battle of Pilckem Ridge (31 July – 2 August 1917) during the Third Battle of Ypres (31 July – 10 November 1917).

During 1916 it became clear that in case of a breakthrough, the very purpose of the first tank, the Mark I, artillery would have great trouble following the advancing troops. Any successful offensive would therefore be in danger of stalling immediately. To solve this problem, Major John Greg,[1] an engineer working for the main tank producing company Metropolitan, Carriage, Wagon and Finance, proposed to build special mechanised artillery, using parts of the Mark I. The production of a prototype was approved on 5 June 1916; the actual design began in July. The first prototype was ready to participate in the Tank Trials Day at Oldbury on 3 March 1917. An order of fifty vehicles was given to Kitson & Co. in Leeds. Deliveries to the army started in June and ended in July of the same year.

The vehicle bore little resemblance to the Mark I. The tracks retained a vestige of the 'lozenge' form but very low, almost flat. At the rear a rectangular superstructure covered the Daimler 105 hp engine and transmission of the Mark I; the transmission was reversed compared to its position in the Mark I. This structure also housed the vehicle commander, a mechanic and two gearsmen. The original double tail wheel of the Mark I (intended to aid steering but often omitted in action) was attached to the rear of the vehicle and seems to be retained in photographs.

The front section, an open area between the tracks, was flanked by tall narrow structures, above the front of the track frame at each side, that acted as armoured cabs for driver on the left and brakesman to the right. In the prototype these driving positions had been directly in front of the superstructure; moving them forward greatly improved visibility, but made communication very difficult. This arrangement had obvious disadvantages where, as in the Mark I, four men, including the gearsmen, had to co-ordinate their actions to drive and manoeuvre a most ungainly vehicle. Between these two structures lay a low-slung pivoting platform able to accommodate a 60-pounder (5-inch) gun, a 6-inch 26 cwt howitzer or any equivalent in stores or personnel.

This platform acted as a loading ramp, down which a loading trolley or cradle could be lowered and positioned beneath the gun carriage. The wheels of the gun were removed and attached to the side of the carrier until needed again. The carriage was lowered onto the trolley which could then be winched up onto the platform using a pair of engine-driven winding drums. The procedure could be reversed to unload the gun. Spaces to the rear of the cabs were used to store up to a hundred rounds of ammunition for the howitzer in addition to other warlike stores. In theory, the field gun could be fired from the vehicle; in reality only the howitzer could be so used.[2]

Since this weapon could be fired while mounted—even if never fired in anger—the Gun Carrier Mark I has been called the first modern self-propelled gun, defined as a weapon system capable of independent action and having operational mobility on the battlefield. 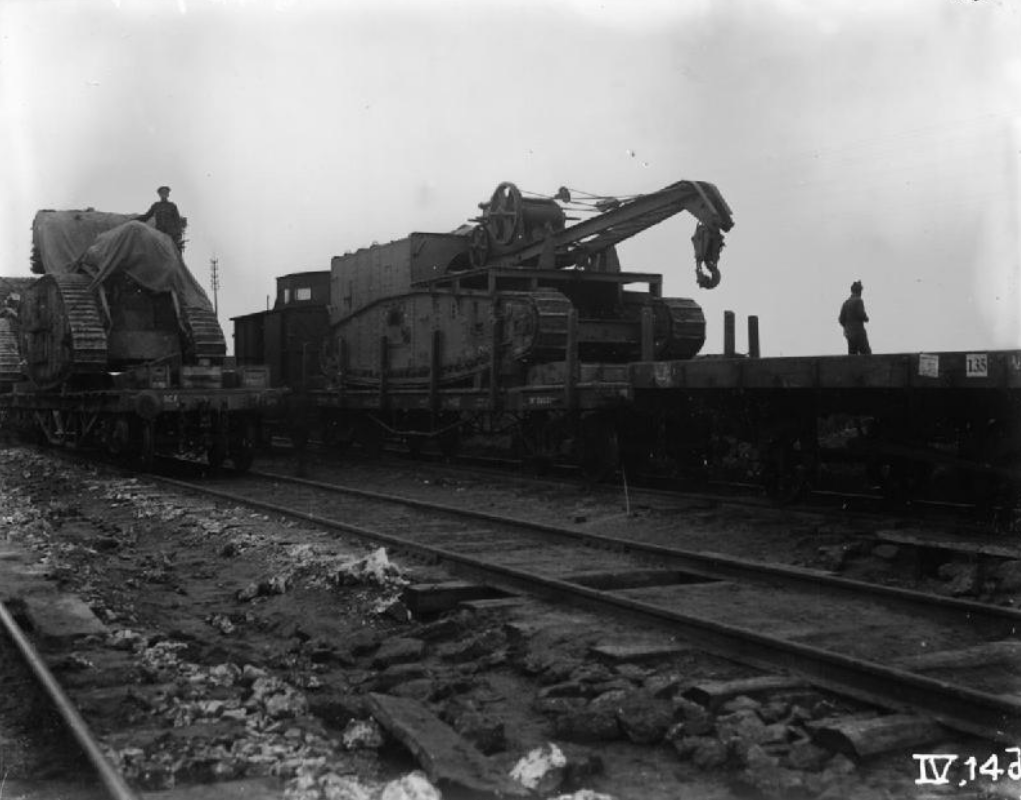 Salvage tank on a train on the way to the Battle of Cambrai, November 1917 https://handwiki.org/wiki/index.php?curid=1863081

In July 1917, two Gun Carrier Companies were formed of 24 vehicles each. Probably none of them ever fired a shot. As breakthroughs never materialised the vehicles were ultimately only used as supply tanks. It was calculated a single tank had the same carrying capacity as 291 human porters. The first Gun Carrier Tanks arrived in France before the Third Battle of Ypres (31 July – 10 November 1917) and were attached to XVIII Corps.[3] The gun carriers were first used at the Battle of Pilckem Ridge (31 July – 2 August 1917) and by the end of the year 44 were in France.[4][5] The gun carriers moved 60-pounder guns and several hundred tons of ammunition. The gun carriers were rarely employed as mobile artillery but as supply tanks they had much greater capacity than converted Mk I and Mk IV tanks and were well-suited to the conditions of the Western Front and they would remain in constant use until the end of hostilities.[6][7][8]

In June 1918, the two Gun Carrier Companies became supply companies attached to the 3rd and 5th Tank Brigades. At the Battle of Hamel (4 July 1918), four gun carriers moved 20–25 long tons (20–25 t) of engineer stores just behind the final objective within thirty minutes of its capture. The four officers and sixteen men transported the equivalent of 1,200 man-loads, economising about two infantry battalions of manpower. At the beginning of August, the 1st Gun Carrier Company was attached to the 5th Tank Brigade, the 2nd company to the 3rd Tank Brigade, 1st company to the 1st Tank Brigade and the 2nd company to the 4th Tank Brigade. The 3rd and 5th Tank Supply companies were at Blingel Camp, the 4th company was with the 2nd Tank Brigade, all except the 1st Tank Supply Company and the 2nd Gun Carrier Company, ready for the Battle of Amiens (8–12 August 1918).[9] There were seven gun carriers available for the opening of the Battle of Cambrai on 20 November 1917 and for the Battle of Amiens, the Australian Corps had 22 gun carriers allotted for supply.[10] On the night of 6/7 August, the 1st Gun Carrier Company carrying explosives had driven to an orchard on the west of Villers Bretonneux, a shell from a German battery near Chipilly ignited a camouflage net and 16 of the 22 vehicles exploded.[11]

Two vehicles out of the order of fifty were finished as Gun Carrier Cranes, salvage tanks with a hand-operated crane in the front but without the distinctive pair of forward cabs.[12]

There was a project for a Gun Carrier Mark II. Early in 1917, a wooden mock-up was made of an improved type, carrying the gun at the back. A prototype was partly built but never finished; the existence of the project is still reflected by the original type being today known as the Gun Carrier Mark I.[13]

More
©Text is available under the terms and conditions of the Creative Commons-Attribution ShareAlike (CC BY-SA) license; additional terms may apply. By using this site, you agree to the Terms and Conditions and Privacy Policy.
Upload a video for this entry
Information
Subjects: Others
Contributor MDPI registered users' name will be linked to their SciProfiles pages. To register with us, please refer to https://encyclopedia.pub/register :
HandWiki
View Times: 13
Entry Collection: HandWiki
Revision: 1 time (View History)
Update Time: 21 Nov 2022
Table of Contents
1000/1000
Hot Most Recent