+1 point
Thank you for your contribution! You can also upload a video entry related to this topic through the link below: https://encyclopedia.pub/user/video_add?id=35457
Check Note
2000/2000
Claire Wineland

Edit
Upload a video
The content is sourced from: https://handwiki.org/wiki/Biography:Claire_Wineland
fibrosis wineland stroke 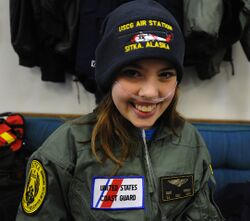 Claire Lucia Wineland (April 10, 1997 – September 2, 2018) was an American activist and author. Through her non-profit organization "Claire's Place Foundation," she supported people with terminal and chronic illnesses, as well as their families.[1][2] She died from a stroke one week after a lung transplant, at the age of 21.

Wineland wrote the book Every Breath I Take, Surviving and Thriving with Cystic Fibrosis and was a TEDx speaker.[1][2]

Wineland was born with cystic fibrosis in Austin, Texas .[3] She enjoyed performing from a young age and appeared in The Music Man at age 4.[2] At age 13, her lungs failed, and she was placed in a medically-induced coma.[4] She was given a 1% chance of survival and awoke after 16 days.[4] She then founded an organization in support of families affected by terminal illness, specifically cystic fibrosis.[1]

Wineland founded the Claire's Place Foundation at age 13.[1] Inspired by the community's support while she was in a coma, she launched the 501(c)(3) non-profit to provide support to children with cystic fibrosis and their affected families.[2] The foundation operates through two programs: Support Families, which offers personalized support and assistance in areas such as treatment, care processes and emotional support from other parent volunteers; and Extended Hospital Stay Grants which provide financial assistance to families who are struggling with extended hospital stays.[2] Claire's Place Foundation has provided financial assistance to 26 families to date.[2]

Wineland was chosen to be the keynote speaker at AARC Congress, the 63rd International Respiratory Convention and Exhibition.[5] She was a TEDx speaker and has spoken at a number of conferences worldwide. Claire appeared in an episode of Red Band Society and in the documentary series My Last Days.[2] She joined the Philips "Breathless Choir" as a soloist.[6]

The Clairity Project is a website featuring a series of educational videos and vlogs hosted on YouTube, which hope to inspire and educate others about living with a terminal illness.[1] According to the website, Wineland's activism aims "to shed some light on what it's really like to be sick, and change the way we view illness and those living with it.”[1]

On August 7, 2017, after not uploading any videos onto her YouTube channel for over a year, Wineland made a return to YouTube with a new account under her real name. Her first uploaded video titled, "I stopped doing the Clarity Project because I got screwed over," revealed that The Clairity Project was not operated by her, but by a video editing company, and she had little to no control or input over the editing of her videos apart from its filming and creation. She revealed that after taking a break from creating videos for some months due to declining health, the company refused to allow her to log into any accounts relating to The Clarity Project. Due to no formal contracts over ownership of the project being in place, the company continued to profit from The Clairity Project, which essentially had her namesake, without Wineland ever having any control or seeing any profits. Wineland stated she did not have the energy or the money to take the case to court, however.[7] Wineland continued to operate her very own YouTube channel where she uploaded personal vlogs regarding her personal feelings and thoughts, cystic fibrosis, her life expectancy and a lung transplant. She uploaded nine videos prior to her death.[8]

On August 26, 2018, Wineland underwent a double lung transplant. Shortly after the surgery, Wineland had a stroke due to a blood clot which "cut off blood flow to the right side of her brain."[9] Wineland died, aged 21, on September 2, 2018, at the UC San Diego Thornton Pavilion.[9][10] Her organs were donated to those in need. Her remains were cremated. Her ashes were given to a family member or friend.[11][12]

In 2016, Wineland was listed as one of Seventeen magazine's 17 Power Teens. She was a Fox Teen Choice Award Honoree in 2015[13] and received the Gloria Barron Prize for Young Heroes[2] and Los Angeles Business Journal's Small Nonprofit of the Year Award in 2014.[14]

The 2019 film Five Feet Apart was inspired by and dedicated to Wineland, who had served as a consultant on the film.