+1 point
Thank you for your contribution! You can also upload a video entry related to this topic through the link below: https://encyclopedia.pub/user/video_add?id=35437
Check Note
2000/2000
George Knapp (Journalist)

Edit
Upload a video
The content is sourced from: https://handwiki.org/wiki/Biography:George_Knapp_(journalist)
television klas-tv ufo 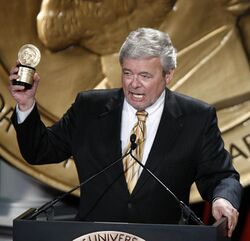 George Knapp (born April 18, 1952) is an United States television investigative journalist, news anchor, and talk radio host. Knapp has been recognized with Edward R. Murrow Awards, Peabody Awards, and between 6 and 24[1] regional Emmy Awards depending on the source. Official Emmy site does not have him listed as winning any awards.

A longtime fixture in Las Vegas media, he works at KLAS-TV[2] and is also a frequent host of the Sunday night/Monday morning Coast To Coast AM syndicated radio show. He is known for his work investigating UFO reports[3] which are a frequent topic of the Coast to Coast show. George Knapp hosts Coast to Coast AM on the 3rd and 4th Sundays of the month and sometimes the 5th.

He moved to Las Vegas in the early 1980s, working first as a cab driver before being hired as an intern and then a news reporter at a PBS station. From there, Knapp was hired as a reporter and news anchor for KLAS.

Knapp became known nationally in the late 1980s by reporting the story of Bob Lazar, who claimed to have worked on extraterrestrial UFOs at the secretive Area 51. Due in part to Knapp's discovery of evidence corroborating some of Lazar's claims, Knapp's stories on Lazar were taken more seriously than typical UFO fare.[5] In 1990, Knapp's stories on Lazar earned an "Individual Achievement by a Journalist" award from the United Press International.[2] However, to Knapp's "eternal shame," he also during this era publicized the claims of conspiracy theorist Bill Cooper, whom Knapp came to regard as far less credible than Lazar.[4]

In 1991, Knapp left KLAS to work for Altamira Communications, a public relations firm whose clients included advocates of the Yucca Mountain nuclear waste repository 90 miles (140 km) north of Las Vegas.[6] Knapp was rehired by KLAS-TV in the mid 1990s when he left the public relations firm.

In the late 1990s and early 2000s, Knapp worked with the now-defunct group National Institute of Discovery Science (NIDS). Founded by Las Vegas businessman Robert Bigelow, NIDS was charged with scientifically studying unusual phenomena with scientists and funding. Based on his work with NIDS and biochemist Colm Kelleher, Knapp publicized the so-called Skinwalker Ranch in northeast Utah, where strange events are alleged to have occurred.[7][8]

In 2004, Knapp won a national Edward R. Murrow Award for a story about vote fraud in Clark County, Nevada.[2] He has also won over a dozen Emmy Awards and several writing awards from the Associated Press.[2]

Knapp and photojournalist Matt Adams were recognized for their work on the investigative series Crossfire: Water, Power, and Politics that received a 2008 Peabody Award.[9]

George Knapp has been concerned with animal welfare since the beginning of his journalism career. Since hosting occasionally with Coast to Coast AM he hosts an annual animal welfare broadcast concerning issues, the development of law, animal cruelty, and remediation efforts. The 2016 broadcast covered various issues, including horses and trophy hunting noting the almost one year anniversary since the killing of Cecil the lion and the effect the incident was still causing at the date of the show.[10]