Submitted Successfully!
Thank you for your contribution! You can also upload a video entry related to this topic through the link below:
https://encyclopedia.pub/user/video_add?id=3515
Check Note
2000/2000
Target of Rapamycin
Edit
Upload a video
This entry is adapted from 10.3390/ijms21218259

The target of rapamycin (TOR) is an evolutionarily-conserved serine/threonine kinase that senses and integrates signals from the environment to coordinate developmental and metabolic processes. In plants, TOR has been shown to be a central regulator of growth and a negative regulator of catabolic processes such as autophagy.

All living organisms require continuous monitoring and integration of signals from their environments for survival, growth, and homeostasis. The target of rapamycin (TOR) kinase complex, an evolutionarily-conserved serine/threonine protein kinase, senses and integrates environmental cues, such as nutrients and stress signals [1][2], and internal signals, like energy and hormones [3][4], to regulate growth and metabolism in both photosynthetic and non-photosynthetic organisms.

Our understanding of TOR signaling, and cellular function began several decades ago when two TOR genes were first isolated from the budding yeast Saccharomyces cerevisiae [5][6]. Subsequently, TOR signaling, function, and structure have been elucidated in other non-photosynthetic organisms such as fungi, Drosophila, and mammals [1][7][8][9][10], and photosynthetic organisms including Arabidopsis thaliana and algae [11][12]]. In fungi and metazoans, TOR forms two structurally and physiologically distinct complexes, termed TORC1 and TORC2 (TOR complex 1 and 2), which regulate cell growth and metabolism in space and time [6][13][14]. To date, there is no evidence for the existence of TORC2-related proteins in plants or microalgae [2][61], suggesting evolutionary conservation of only TORC1 and therefore we discuss only TORC1 and related proteins here.

Under normal nutrient-rich conditions, autophagy is maintained at low basal levels (basal autophagy) and its disruption may result in impaired homeostasis and abnormal conditions such as cancer and neurodegenerative disorders [44][45][46]. The low basal autophagy level is maintained by TOR-mediated phosphorylation of ATG13, preventing autophagy induction by the ATG1-ATG13 kinase complex [47][48][49][50]. However, stress conditions such as nutrient starvation and cellular energy deficit [19][51][52][53][54][55][56] trigger responses that reduce TOR activity, which in turn leads to autophagy induction. Although we focus on general non-selective autophagy, it is noteworthy that autophagy can be selective, and targeting of specific cell organelles and macromolecules to the lysosome/vacuole for degradation has been described in detail elsewhere [57][58][59][60].

In yeast, plants, and animals, TORC1 constitutes a catalytic subunit, TOR itself, a regulatory subunit, LST8 (lethal with sec thirteen 8), and RAPTOR (regulatory-associated protein of TOR/kontroller of growth 1 (KOG1) in yeast) [62][63][64] (Figure 1A). Yeast-specific core components include Tco89p (89 kDa protein of TOR complex one), which is absent in mammals and plants [6][65], while the additional components of the mammalian TORC1 are DEPTOR (DEP-domain-containing mTOR-interacting protein), [66], and PRAS40 (40 kDa pro-Rich AKT substrate) [67] (Figure 1A). DEPTOR and PRAS40 have inhibitory activity toward mammalian TORC1 and regulate substrate recruitment and apoptosis in cancer cells [66][68][69][70]. Whereas these subunits appear to be absent in yeast and plants, it is possible that they are present but diverged in sequence and if this is the case, could they add yet another regulatory switch to TOR-autophagy signaling? For instance, these TORC1 components may activate autophagy by inhibiting TORC1 even in nutrient sufficient conditions in which autophagy is normally downregulated. Future research may uncover these or related components in yeast and plants and help decipher other autophagy regulatory mechanisms. 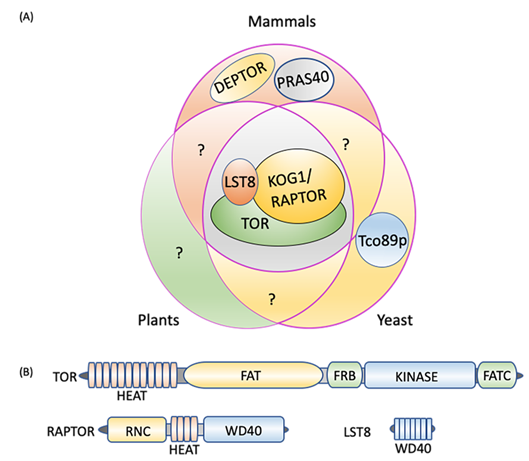 The TOR protein kinase catalytic subunit consists of conserved N-terminal HEAT (Huntington-EF3-PP2A-TOR1) repeats (Figure 1B), which interact with RAPTOR and are required for substrate recruitment and membrane association. In mammals, the localization of TORC1 to the lysosome membrane is necessary for its negative regulation of autophagy when nutrients, particularly amino acids, are abundant [63][71][72] (see Section 3 for details). By contrast, the yeast TORC1 appears to constitutively localize to the vacuole membrane [73] whereas subcellular localization of plant TORC1 under different conditions needs further research. In the central region of TOR lies a focal adhesion target (FAT) domain potentially involved in interactions with partner proteins [64][74] and which contributes to kinase activation, a necessary step for TORC1 signaling. The catalytic Ser/Thr kinase domain is sandwiched between the FKBP12/rapamycin binding (FRB) domain, and the FATC (FAT C-terminus) domain at the extreme C-terminus. The FRB domain is the binding site for the FKBP12-rapamycin complex [5][6][61][75][76], while the FATC domain serves a scaffolding and kinase activation role [77].

RAPTOR is made up of a RAPTOR N-terminal conserved (RNC) domain, a HEAT domain, and a WD40 (tryptophan-aspartic acid repeats of 40 amino acids) domain at the C-terminus [78][79] (Figure 1B). RAPTOR binds to the HEAT repeat of TOR, selectively presents substrates to the kinase domain, and facilitates substrate phosphorylation [2][80][81][82][83]. RAPTOR also has a role in assembly and stabilization of the complex in mammals [78][79], and the conserved nature of the RNC and HEAT repeats in RAPTOR orthologs suggests a conserved role in other organisms. In Arabidopsis, knock-out of RAPTOR activates autophagy under non-stressed conditions, suggesting that RAPTOR plays a role in TOR-mediated autophagy repression [19]. LST8 is mainly composed of WD40 repeats, like the β-propeller fold of WD-repeat proteins [61][84] (Figure 1B). By interacting with the C-terminal domain of the catalytic subunit, LST8 contributes to TOR complex stability and catalytic activity regulation in yeast, plants, and animals [85][86][87][88].

The existence of TORC1 as a multiprotein complex suggests different possibilities/avenues of signal integration and control. Given that cells experience constant fluctuations in the internal and external environment, it is plausible that a key protein such as TORC1 must adapt quickly and rapidly to these changes to maintain cellular function, and this can be achieved through regulation of different components. Moreover, could these subunits be involved in sensing of upstream signals, or could they mediate TOR interaction with other proteins to regulate autophagy? How does RAPTOR select the substrates to be presented to TOR? Could it have substrate-specific interacting motifs? Or is the structure modified for substrate binding? Future research may aid in answering these or similar questions to fully understand the cooperative processes by which TOR and associated proteins integrate different signals to regulate autophagy. For instance, insight could be generated from structural studies of TORC1 using cryo- electron microscopy (Cryo-EM), for example, although a detailed structure has been generated for mammalian TORC1, more information is needed for plant TORC1 to provide a mechanistic understanding of TOR-autophagy signaling.

More
© Text is available under the terms and conditions of the Creative Commons Attribution (CC BY) license; additional terms may apply. By using this site, you agree to the Terms and Conditions and Privacy Policy.
Upload a video for this entry
Information
Subjects: Plant Sciences
Contributor MDPI registered users' name will be linked to their SciProfiles pages. To register with us, please refer to https://encyclopedia.pub/register :
Zakayo Kazibwe
View Times: 229
Revisions: 2 times (View History)
Update Time: 14 Dec 2020
Table of Contents
1000/1000
Hot Most Recent