+1 point
Thank you for your contribution! You can also upload a video entry related to this topic through the link below: https://encyclopedia.pub/user/video_add?id=34944
Check Note
2000/2000
Kia Connect

Edit
Upload a video
The content is sourced from: https://handwiki.org/wiki/Software:Kia_Connect

Kia Connect, formerly UVO eServices, is a subscription-free OEM infotainment and telematics service offered by Kia Motors America on select vehicles for the United States market. The system allows users to make hands-free calls on their smartphone, stream music, navigate to a POI, and perform vehicle diagnostics with the use of voice commands. The integrated in-vehicle communications and entertainment system is developed by Kia Motors and other third-party developers.

The UVO system is driven by vehicle communications with a smartphone application. Data transfers from the vehicle to the smartphone application utilize the customer's mobile carrier resulting in a subscription-free telematics service. Users of the system are able to interact with their vehicle to retrieve diagnostic trouble codes. Users can also load a point of interest to the vehicle's head unit. Other technologies like GPS and interactive voice response are also integrated into the system.

The service was renamed Kia Connect in September 2021.[3]

The below table provides a short description of UVO eServices features. Feature availability depends on model and model year.[4]

Owners of UVO equipped vehicles can register for an account on www.myuvo.com to view information related to their vehicle. Vehicle information available includes vehicle diagnostics, trip info, MyCarZone, and MyPOIs. In addition to viewing vehicle information, users can also view the maintenance schedule for their vehicle and schedule appointments with a dealer. Also, users can earn awards by actively using the website. 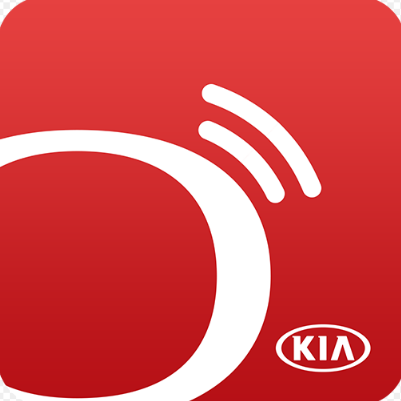 The UVO smartphone app is available in the iTunes and Google Play stores. The app interfaces with the vehicle through a USB or Bluetooth connection. The UVO eServices with 8" Nav head unit requires a USB connection to transfer telematics data, while others use Bluetooth for data transfer. All head units can connect with Bluetooth for phone and audio functions.

In 2014, the app was re-skinned and new features were added. On compatible 2015 vehicles, the UVO app will display trip information and My Car Zone.

The UVO app serves as a web interface for vehicles that do not have embedded web capabilities. Data is transferred from the UVO head unit to the app via Bluetooth or USB, which is then transferred to the web and viewable from both the app and the web. 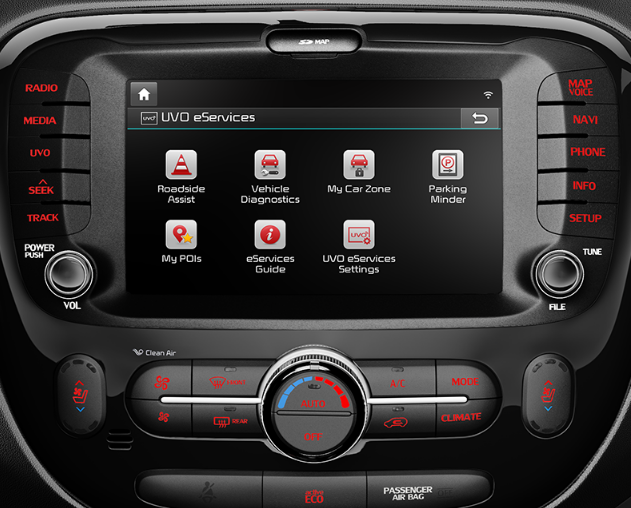 The original UVO was released on 2011 vehicles. Features include voice commands, Bluetooth, jukebox, and a rear-view camera. UVO was replaced by UVO eServices on most models by the 2014 model year. Although the standard version was discontinued, it is still used in 2015 LX, EX Sedonas.

UVO eServices was the first UVO to interface with MyUVO.com and the UVO mobile app. It was introduced on 2013 model year Optima, Optima Hybrid, and Sportage. In addition to having all of the features on the original UVO, UVO eServices has Parking Minder, Enhanced Roadside Assist, and Vehicle Diagnostics. On 2015 model year vehicles, Trip Info and My Car Zone features are included.

UVO eServices with 7" Nav was introduced alongside UVO eServices on some 2013 models. In addition to all of the features of UVO and UVO eServices, the 7" Nav version has Navigation and My POIs. On 2015 model year vehicles, Trip Info and My Car Zone are included.

On September 22, 2014, an update for the 2014 Soul UVO with Nav system was released which unlocks the eServices including My Car Zone, Vehicle Diagnostics, and 911 Connect.[5] It also includes updated maps and improved navigation features, as well as Siri Eyes-Free.

UVO Premium was designed specifically for the 2015 K900. It shares most of its features with UVO eServices with 7" Nav. It comes with a completely redesigned user interface and the touch screen from other UVO versions is replaced with a controller wheel on the center console.

The following vehicles are UVO capable, available as either an optional or standard feature. The date next to each vehicle indicates in which model year UVO was first available on that specific vehicle. On some models, UVO is not available on all trim levels.[6]

More
©Text is available under the terms and conditions of the Creative Commons-Attribution ShareAlike (CC BY-SA) license; additional terms may apply. By using this site, you agree to the Terms and Conditions and Privacy Policy.
Upload a video for this entry
Information
Subjects: Others
Contributor MDPI registered users' name will be linked to their SciProfiles pages. To register with us, please refer to https://encyclopedia.pub/register :
HandWiki
View Times: 10
Entry Collection: HandWiki
Revision: 1 time (View History)
Update Time: 17 Nov 2022
Table of Contents
1000/1000
Hot Most Recent