+1 point
Thank you for your contribution! You can also upload a video entry related to this topic through the link below: https://encyclopedia.pub/user/video_add?id=34694
Check Note
2000/2000
Clyde Cowan

Edit
Upload a video
The content is sourced from: https://handwiki.org/wiki/Biography:Clyde_Cowan
neutrino bethesda 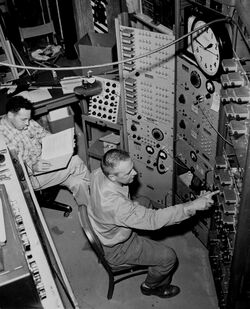 Clyde Lorrain Cowan Jr (December 6, 1919 in Detroit, Michigan – May 24, 1974 in Bethesda, Maryland) was an American physicist, the co-discoverer of the neutrino along with Frederick Reines. The discovery was made in 1956 in the neutrino experiment.[1] Frederick Reines received the Nobel Prize in Physics in 1995 in both their names.

Born the oldest of four children in Detroit, Michigan, Cowan's family moved to St. Louis, Missouri, where he began his education attending public schools. While attending the Missouri School of Mines and Metallurgy in Rolla, Missouri, Cowan was Editor-in-Chief of the Missouri Miner newspaper from 1939–1940, and graduated in 1940 with a B.S. in Chemical Engineering.

Cowan was a captain in the United States Army Air Forces , where he earned a bronze star in World War II.

From 1936–1940 he was in the Reserve Officers' Training Corps. Cowan joined the U.S. Army Chemical Warfare Service with the rank of Second Lieutenant when United States joined World War II in 1941. In August 1942, he was transferred to Eisenhower's Eighth Air Force stationed in London, England . In 1943 he designed and built an experimental cleaning unit to be used in case of gas attack. In the following year, he joined the staff of the British Branch of the Radiation Laboratory of the Massachusetts Institute of Technology, which was located in Great Malvern, England. In 1945 he was a liaison officer with the Royal Air Force , working to expedite transmittal of technical information and equipment. He returned to the United States in 1945, and worked at Wright Patterson Air Force Base in Dayton, Ohio. He left active duty in 1946.

Benefitting from the G.I. Bill, Cowan attended Washington University in St. Louis, Missouri, receiving a Masters Degree, and a Ph.D. in 1949. He then joined the staff of the Los Alamos Scientific Laboratory in New Mexico, where he met Frederick Reines.

In 1951 Reines and Cowan began their search for the neutrino. Their work was completed at the Savannah River Plant in Aiken, South Carolina, in 1956.

Cowan began his teaching career in 1957 as a Professor of Physics at George Washington University in Washington, D.C.. The following year he left GWU and joined the faculty of The Catholic University of America in Washington, D.C., a post he held until the end of his life. He also acted at various times as a consultant to the U.S. Atomic Energy Commission (AEC), US Naval Ordnance Laboratory, the United States Naval Academy, the United States Army, United Mine Workers of America, Electric Boat Co., and the Smithsonian Institution, Washington, D.C.

Cowan died in Bethesda, Maryland of a sudden heart attack on May 24, 1974[2], and was buried in Arlington National Cemetery.

Cowan was married in Woodford, England, January 29, 1943 to Betty Eleanor, daughter of George Henry and Mabel Jane (Mather) Dunham of Wanstead, England, and has three surviving children: Elizabeth Esthermay, who married John A. Riordon; Marian Jane, who married Charles M. Kriston; and George Langstroth, who married Justine Allen, then Kim Borkowitz. Seven other children died in infancy, and he had two adopted sons: David Lorrain (died in childhood) and Michael Lorrain. His family has blossomed to include 11 grandchildren and 18 great-grandchildren.

His grandson James Riordon, a former physicist and engineer who heads the American Physical Society media relations office, initially conceived of the distributed computing project Einstein@home, which searches gravitational wave data for signals from massive rotating objects such as pulsars. His granddaughter Barbara Riordon Maher earned her MS in Emergency Management in 2006, and is a PhD candidate in Public Health Administration. She is currently the Emergency Preparedness Coordinator for Dare County North Carolina Department of Public Health. She is a retired Maryland State Police Trooper/Flight Paramedic. Her publications include articles in plant physiology as well as medical nuclear, biological, chemical, and explosive response for the Department of Defense. She has obtained the rank of Major in the Maryland Army National Guard and serves as the Operations Officer for the JFHQ Medical Detachment. Her two sons, Joseph and Patrick, are college students seeking degrees in biology and emergency services. Joseph is currently serving in the Maryland Army National Guard as a 15P, Aviation Operations Specialist.

Cowan was a direct descendant of L. L. Langstroth, the "Father of Modern Beekeeping", and a distant relative of Katherine Drexel, a Catholic saint.

A biography can be found in The National Cyclopedia of American Biography Vol. 58 published by James T. White & Company Clifton, New Jersey, 1979.