+1 point
Thank you for your contribution! You can also upload a video entry related to this topic through the link below: https://encyclopedia.pub/user/video_add?id=34251
Check Note
2000/2000
Sutra

Edit
Upload a video
The content is sourced from: https://handwiki.org/wiki/Philosophy:Sutra

Sutra (Sanskrit: सूत्र, romanized: sūtra, lit. 'string, thread') in Indian literary traditions refers to an aphorism or a collection of aphorisms in the form of a manual or, more broadly, a condensed manual or text. Sutras are a genre of ancient and medieval Indian texts found in Hinduism, Buddhism and Jainism. In Hinduism, sutras are a distinct type of literary composition, a compilation of short aphoristic statements. Each sutra is any short rule, like a theorem distilled into few words or syllables, around which teachings of ritual, philosophy, grammar, or any field of knowledge can be woven. The oldest sutras of Hinduism are found in the Brahmana and Aranyaka layers of the Vedas. Every school of Hindu philosophy, Vedic guides for rites of passage, various fields of arts, law, and social ethics developed respective sutras, which help teach and transmit ideas from one generation to the next. In Buddhism, sutras, also known as suttas, are canonical scriptures, many of which are regarded as records of the oral teachings of Gautama Buddha. They are not aphoristic, but are quite detailed, sometimes with repetition. This may reflect a philological root of sukta (well spoken), rather than sutra (thread). In Jainism, sutras also known as suyas are canonical sermons of Mahavira contained in the Jain Agamas as well as some later (post-canonical) normative texts. 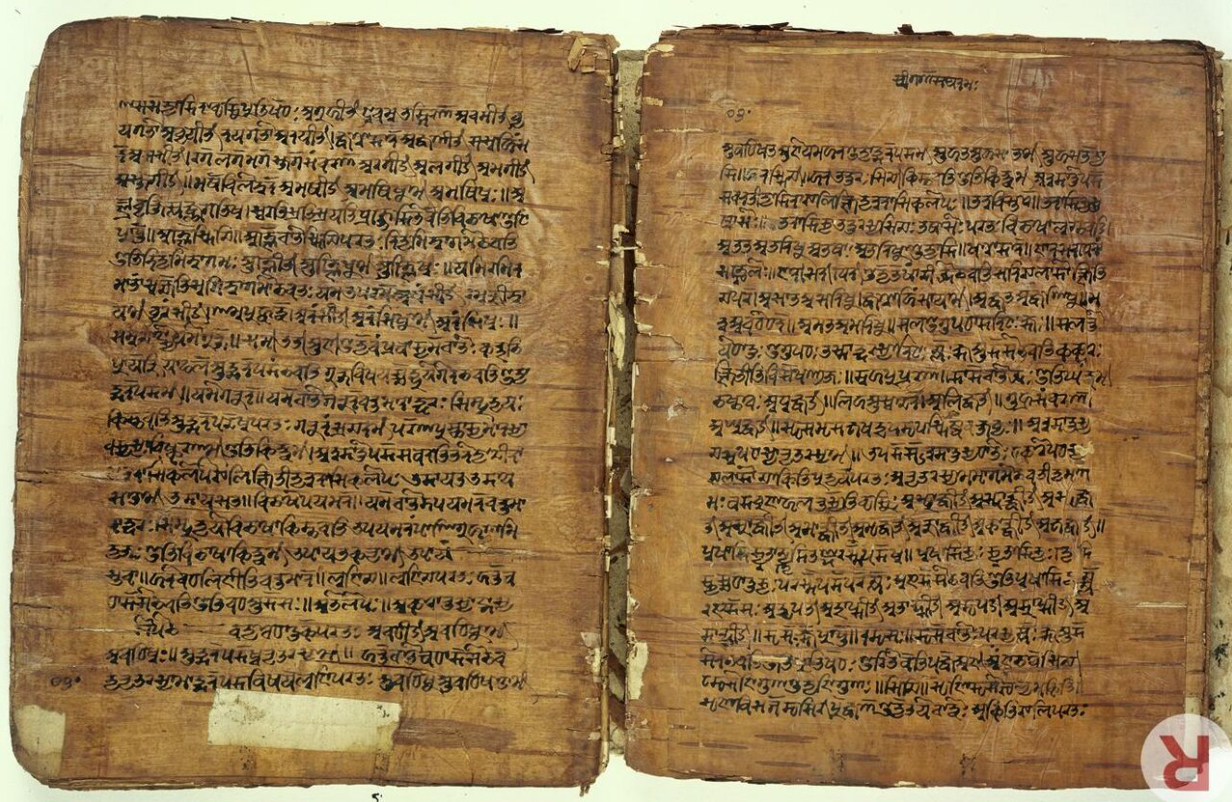 In the context of literature, sūtra means a distilled collection of syllables and words, any form or manual of "aphorism, rule, direction" hanging together like threads with which the teachings of ritual, philosophy, grammar, or any field of knowledge can be woven.[2][3]

A sūtra is any short rule, states Moriz Winternitz, in Indian literature; it is "a theorem condensed in few words".[3] A collection of sūtras becomes a text, and this is also called sūtra (often capitalized in Western literature).[2][3]

A sūtra is different from other components such as Shlokas, Anuvyakhayas and Vyakhyas found in ancient Indian literature.[6] A sūtra is a condensed rule which succinctly states the message,[7] while a Shloka is a verse that conveys the complete message and is structured to certain rules of musical meter,[8][9] a Anuvyakhaya is an explanation of the reviewed text, while a Vyakhya is a comment by the reviewer.[6][10]

Sutras first appear in the Brahmana and Aranyaka layer of Vedic literature.[13] They grow in the Vedangas, such as the Shrauta Sutras and Kalpa Sutras.[2] These were designed so that they can be easily communicated from a teacher to student, memorized by the recipient for discussion or self-study or as reference.[3]

A sutra by itself is condensed shorthand, and the threads of syllable are difficult to decipher or understand, without associated scholarly Bhasya or deciphering commentary that fills in the "woof".[14][15]

The oldest manuscripts that have survived into the modern era, that contain extensive sutras, are part of the Vedas dated to be from the late 2nd millennium BCE through mid 1st-millennium BCE.[16] The Aitareya Aranyaka for example, states Winternitz, is primarily a collection of sutras.[13] Their use and ancient roots are attested by sutras being mentioned in larger genre of ancient non-Vedic Hindu literature called Gatha, Narashansi, Itihasa, and Akhyana (songs, legends, epics, and stories).[17]

In the history of Indian literature, large compilations of sutras, in diverse fields of knowledge, have been traced to the period from 600 BCE to 200 BCE (mostly after Buddha and Mahavira), and this has been called the "sutras period".[17][18] This period followed the more ancient Chhandas period, Mantra period and Brahmana period.[19]

Some of the earliest surviving specimen of sutras of Hinduism are found in the Anupada Sutras and Nidana Sutras.[21] The former distills the epistemic debate whether Sruti or Smriti or neither must be considered the more reliable source of knowledge,[22] while the latter distills the rules of musical meters for Samaveda chants and songs.[23]

A larger collection of ancient sutra literature in Hinduism corresponds to the six Vedangas, or six limbs of the Vedas.[24] These are six subjects that were called in the Vedas as necessary for complete mastery of the Vedas. The six subjects with their own sutras were "pronunciation (Shiksha), meter (Chandas), grammar (Vyakarana), explanation of words (Nirukta), time keeping through astronomy (Jyotisha), and ceremonial rituals (Kalpa).[24] The first two, states Max Muller, were considered in the Vedic era to be necessary for reading the Veda, the second two for understanding it, and the last two for deploying the Vedic knowledge at yajnas (fire rituals).[24] The sutras corresponding to these are embedded inside the Brahmana and Aranyaka layers of the Vedas. Taittiriya Aranyaka, for example in Book 7, embeds sutras for accurate pronunciation after the terse phrases "On Letters", "On Accents", "On Quantity", "On Delivery", and "On Euphonic Laws".[25]

The fourth and often the last layer of philosophical, speculative text in the Vedas, the Upanishads, too have embedded sutras such as those found in the Taittiriya Upanishad.[25]

The compendium of ancient Vedic sutra literature that has survived, in full or fragments, includes the Kalpa Sutras, Smarta Sutras, Srauta Sutras, Dharma Sutras, Grhya Sutras, and Sulba Sutras.[26] Other fields for which ancient sutras are known include etymology, phonetics, and grammar.

Some examples of sutra texts in various schools of Hindu philosophy include:

Sutra, without commentary:
Soul is, for there is no proof that it is not. (Sutra 1, Book 6) This different from body, because heterogeneous. (Sutra 2, Book 6) Also because it is expressed by means of the sixth. (Sutra 3, Book 6)

With Vijnanabhiksu's commentary bhasya filled in:
Soul is, for there is no proof that it is not, since we are aware of "I think", because there is no evidence to defeat this. Therefore all that is to be done is to discriminate it from things in general. (Sutra 1, Book 6) This soul is different from the body because of heterogeneous or complete difference between the two. (Sutra 2, Book 6) Also because it, the Soul, is expressed by means of the sixth case, for the learned express it by the possessive case in such examples as 'this is my body', 'this my understanding'; for the possessive case would be unaccountable if there were absolute non-difference, between the body or the like, and the Soul to which it is thus attributed as a possession. (Sutra 3, Book 6)

Reality is truth (prāma, foundation of correct knowledge), and what is true is so, irrespective of whether we know it is, or are aware of that truth.

In Buddhism, a sutta or sutra is a part of the canonical literature. These early Buddhist sutras, unlike Hindu texts, are not aphoristic. On the contrary, they are most often quite lengthy. The Buddhist term sutta or sutra probably has roots in Sanskrit sūkta (su + ukta), "well spoken" from the belief that "all that was spoken by the Lord Buddha was well-spoken".[44] They share the character of sermons of "well spoken" wisdom with the Jaina sutras.

In Chinese, these are known as 經 (pinyin: jīng). These teachings are assembled in part of the Tripiṭaka which is called the Sutta Pitaka. There are many important or influential Mahayana texts, such as the Platform Sutra and the Lotus Sutra, that are called sutras despite being attributed to much later authors.

In Theravada Buddhism suttas comprise the second "basket" (pitaka) of the Pāli Canon. Rewata Dhamma and Bhikkhu Bodhi describe the Sutta pitaka as

The Sutta Pitaka, the second collection, brings together the Buddha's discourses spoken by him on various occasions during his active ministry of forty-five years.[45]

In the Jain tradition, sutras are an important genre of "fixed text", which used to be memorized.[46]

The Kalpa Sūtra is, for example, a Jain text that includes monastic rules,[47] as well as biographies of the Jain Tirthankaras.[48] Many sutras discuss all aspects of ascetic and lay life in Jainism. Various ancient sutras particularly from the early 1st millennium CE, for example, recommend devotional bhakti as an essential Jain practice.[49]

The surviving scriptures of Jaina tradition, such as the Acaranga Sutra (Agamas) exist in sutra format,[50] as is the Tattvartha Sutra – a Sanskrit text accepted by all four Jainism sects as the most authoritative philosophical text that completely summarizes the foundations of Jainism.[51][52]

More
©Text is available under the terms and conditions of the Creative Commons-Attribution ShareAlike (CC BY-SA) license; additional terms may apply. By using this site, you agree to the Terms and Conditions and Privacy Policy.
Upload a video for this entry
Information
Subjects: Religion
Contributor MDPI registered users' name will be linked to their SciProfiles pages. To register with us, please refer to https://encyclopedia.pub/register :
HandWiki
View Times: 22
Entry Collection: HandWiki
Revision: 1 time (View History)
Update Time: 13 Nov 2022
Table of Contents
1000/1000
Hot Most Recent