+1 point
Thank you for your contribution! You can also upload a video entry related to this topic through the link below: https://encyclopedia.pub/user/video_add?id=34133
Check Note
2000/2000
John F. MacArthur

Edit
Upload a video
The content is sourced from: https://handwiki.org/wiki/Biography:John_F._MacArthur
television grace non-denominational 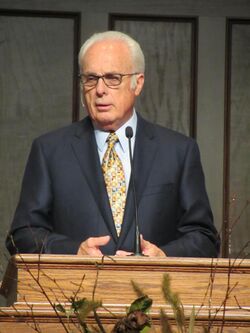 John Fullerton MacArthur Jr. (born June 19, 1939) is an American Protestant pastor and author known for his internationally syndicated Christian teaching radio and television program Grace to You.[1] He has been the pastor of Grace Community Church, a non-denominational church in Sun Valley, California, since February 9, 1969.[2] He is currently Chancellor Emeritus of The Master's University in Santa Clarita, California, and The Master's Seminary in Sun Valley, California.

MacArthur is a strong proponent of expository preaching, and has been acknowledged by Christianity Today as one of the most influential preachers of his time.[3] MacArthur has written or edited more than 150 books, most notably the MacArthur Study Bible, which has sold more than one million copies, receiving a Gold Medallion Book Award.[4]

The grandson of Canadian Anglican minister Harry MacArthur (d. 1950) and son of Baptist radio preacher Jack MacArthur (born in Calgary, Canada)[5] and Irene Dockendorf, MacArthur was born in Los Angeles .[6] He claims to be a fifth cousin of U.S. Army general Douglas MacArthur.[7] MacArthur followed in his father's footsteps to enroll at the fundamentalist Bob Jones College from 1957 to 1959. In 1960, after a year off, he was accepted to the Free Methodist Church’s Los Angeles Pacific College, where he played three games of football, carrying the ball once (see 1962 yearbook statistics).[8] In 1963, he was granted a Masters of Divinity from the Bible Institute of Los Angeles's new Talbot Theological Seminary, in La Mirada, California , with honors. MacArthur was also given honoraria from Talbot Theological Seminary (Doctor of Divinity, 1977) and from Grace Graduate School (1976).[9]

While at Bob Jones College in South Carolina, MacArthur was recruited to the Voice of Calvary singing quartet, often broadcast on Christian radio in Southern California. From 1964 to 1966, MacArthur was hired by his father as associate pastor at the Harry MacArthur Memorial Bible Church (now Calvary Bible Church in Burbank, California), which his father Jack had planted and named after his own father.[10] From 1966 to 1969, MacArthur was hired as the faculty representative for Talbot Theological Seminary. On February 9, 1969, he was hired as the third and youngest pastor at nondenominational Grace Community Church of Sun Valley, California.[11]

MacArthur's daily radio and television program, Grace to You, now broadcast throughout much of the world, was created by the Grace media team to publicize audio cassettes of sermons; in 1977, it was first broadcast in Baltimore, Maryland.[12] In 1985, MacArthur was made president of Los Angeles Baptist College, now The Master's University, a four-year liberal-arts Christian college.[13] In 1986, he was made president of the new Master's Seminary.[14]

Nearly 43 years after beginning in the pulpit of Grace Community, MacArthur completed one of his own life goals,[2] that of preaching through the entire New Testament less the ending of Mark on June 5, 2011.[15][16]

4.1. The Authority of Scripture

Central to all MacArthur's theology is a very high view of Scripture (the 66 books of the Bible).[17] He believes that Scripture is inerrant and infallible because it is "the Word of God" and that God cannot lie.[17] Furthermore, he believes that we are obliged to render full submission to Scripture above all else and that "To mishandle the Word of God is to misrepresent the One who wrote it. To reject its claims is to call Him a liar. To ignore its message is to snub that which the Holy Spirit inspired."[17]

MacArthur is a cessationist and is one of the most prominent voices in American Christianity against the continuationist beliefs of Pentecostalism and the Charismatic Movement. He has written three books on the subject; in October 2013, his church hosted a conference called "Strange Fire" to mark the launch of a book of the same name.[18] The event featured a number of speakers who argued for cessationist theology and strongly critiqued the Charismatic Movement.[19]

He broadly calls modern "visions, revelations, voices from heaven...dreams, speaking in tongues, prophecies, out-of-body experiences, trip to heaven, anointings, miracles – all false, all lies, all deceptions – attributed falsely to the Holy Spirit." And that "The Charismatic movement has stolen the Holy Spirit and created a golden calf, and they're dancing around the golden calf as if it were the Holy Spirit."[20][21] A list of erstwhile, supernatural Gifts of the Spirit was published, mostly from 1 Corinthians 12–14, holding that “Once the New Testament was finished, those sign gifts ceased to have a function" and ended forever at the conclusion of the Apostolic Age, around AD 100.[22]

In 1983, MacArthur first published his belief in the doctrine of "incarnational sonship." In 1989, after some criticism, he defended his views in a plenary session of the annual convention of the Independent Fundamental Churches of America. A decade later, he announced he had retracted this view via an article from Grace to You.[23]

MacArthur has stated that he opposes "male chauvinist and feminist views".[24] He has a complementarian view on gender roles and considers that the Bible forbids women to preach to men or to exercise authority over men in churches, and he believes that the Biblical roles of elder and pastor are restricted to men. To this end he cites the biblical passage of 1 Timothy 2:11-12.[25][26][27]

MacArthur describes himself as a "leaky dispensationalist".[28] MacArthur holds to the Progressive dispensationalist school of premillennialism, a pre-tribulational Rapture of the Church, and a literal Millennium. Thus on one hand, he teaches a completely restored Israel shall inherit physical ownership of the earth. On the other hand, instructors and writers on his staff publish position papers that the divine covenants and divine laws of the Old Testament do not apply to the church, but rather that “New Covenant Theology” is correct that the church, from the spiritual New Jerusalem, must support the exclusive rule of Israel over the globe.[29][30][31]

MacArthur believes "that if you confess with your mouth Jesus as Lord, and believe in your heart that God raised Him from the dead, you will be saved" (Rom 10:9). This submission to Jesus as Lord when converting to faith in Jesus Christ became known to Arminians as the “Lordship salvation controversy” in the 1980s. MacArthur argues that confessing Jesus Christ as Lord is a necessary component of free grace theology. He states, "You must receive Jesus Christ for who He is, both Lord and Savior, to be truly saved (II Peter 2:20)."[32] Regarding eternal security, he states, "It should never be presented merely as a matter of being once saved, always saved—with no regard for what you believe or do. The writer of Hebrews 12:14 states frankly that only those who continue living holy lives will enter the Lord's presence." These views raised controversy within U.S. evangelicalism and were challenged in print by non-lordship dispensationalist theologians Charles Ryrie and Zane C. Hodges, who argued that MacArthur's ministry was teaching a form of works-based salvation. MacArthur denied the charge, as attested on two tapes recorded in 1989 when he was asked to “reason together with the IFCA man”.[33]

MacArthur advocates Young Earth creationism in his book The Battle For the Beginning (2001), and in his sermons.[34] Speaking about evolutionary theory, he writes that Christians "ought to expose such lies for what they are and oppose them vigorously". He argues that "the battle for the beginning is ultimately a battle between two mutually exclusive faiths – faith in Scripture versus faith in anti-theistic hypotheses. It is not really a battle between science and the Bible."[35]

MacArthur has been involved with multiple controversies regarding his outspokenness on certain topics. MacArthur is very open about opposing same-sex marriage, against female pastors, the Catholic Church, and the social justice movement.[36] He has delivered multiple sermons where he discusses these issues.[37] For example, he claimed that "no one is gay" as "God didn't hardwire anybody"[38] to be gay any more than he hardwired anybody to be an adulterer or a bank robber.[39] In his words, that's like saying, "You know, I keep robbing banks, but I'm a robber. I'm a bank robber. What am I gonna do? I'm a bank robber."[39]

In 2012, at The Shepherd's Conference, MacArthur was participating in a word association questionnaire where the moderator gave him the name "Steven Furtick." MacArthur proceeded to argue that Furtick, pastor of Elevation Church, was "unqualified".[40] Furtick responded to this comment in his 2016 book Unqualified: How God Uses Broken People to Do Big Things.

In 2019, at the Truth Matters Conference, during another word association questionnaire, the name, "Beth Moore" was given. Reiterating his stance on 1 Timothy 2:12, MacArthur responded by stating that Beth Moore should, "Go home" and that, "There is no case that can be made Biblically for a woman preacher. Period. Paragraph. End of Discussion."[41] Moore responded to this stance by stating on her Twitter account, "I did not surrender to a calling of man when I was 18 years old. I surrendered to a calling of God. It never occurs to me for a second to not fulfill it. I will follow Jesus - and Jesus alone - all the way home. And I will see His beautiful face and proclaim, Worthy is the Lamb!"[42]

In 2020 and 2021, during the COVID-19 global crisis, MacArthur ignored orders from Los Angeles County public health officials regarding services at Grace Community Church, and insisted that no one from the church had become seriously ill despite reports to the contrary.[43] His major contention was that there was no justification for closing down churches over a disease with 94% survival rate according to figures from the U.S. Centers for Disease Control and Prevention (CDC).[44][45] He stated that there was a deadlier virus killing people---the virus of sin---leading many to eternal death. Los Angeles County sued the church over its refusal to close down, and the church counter-sued, claiming religious freedom discrimination.[45] Eventually the lawsuits were settled out of court with the county and state paying $400,000 each to Grace Community Church. In August 2021, MacArthur admitted to congregants that "many people" contracted COVID-19 while it "went through" the church in December 2020 and January 2021, including both him and his wife.[46][47]

MacArthur is married to his wife, Patricia[48] and together they have four children, fifteen grandchildren and 2 great-grandsons.[49]