+1 point
Thank you for your contribution! You can also upload a video entry related to this topic through the link below: https://encyclopedia.pub/user/video_add?id=34034
Check Note
2000/2000
BMW 7 Series (E65)

Edit
Upload a video
The content is sourced from: https://handwiki.org/wiki/Engineering:BMW_7_Series_(E65)

The BMW E65 is the fourth generation of the BMW 7 Series range of full-size luxury sedans, and was produced from 2001 to 2008. The variants of the range are: The E65 was the first BMW vehicle to include the iDrive infotainment system, the new brand design language, active anti-roll bars, a 6-speed automatic transmission, an electronic smart Key (dispensing with the traditional metallic key), and night vision. The 760i model also utilised the world's first production V12 engine to use direct injection. In late 2008, the E65 7 Series was replaced by the 7 Series (F01).

Development for the BMW E65 7 Series began in early 1996. In early 1997, Chris Bangle delivered a brief to BMW's Munich and DesignworksUSA studios. After a competition between 20 designers, Adrian van Hooydonk's design was approved in the spring of 1998.[1] Production specifications were frozen in January 1999 and took 34 months from freeze to market launch.[2][3][4][5] The design was patented on 16 November 2000[6] and development ended in early 2001.

Under the direction of Chris Bangle, BMW's Design Chief at the time, the BMW E65 7 Series heralded a new styling era for BMW.[14]

BMW's board of directors were keen to move the company's image into the future, and the initial styling sketches from 1998 by Adrian van Hooydonk were of a fastback body style - even more radical than the eventual production model.[15] The controversial "flame surfacing" design[16][17] greatly contrasted the conservative lines of its E38 predecessor. The rear end styling was nicknamed "Bangle Butt" by critics, due to the elongated rear bootlid.[18][19]

The E65 contained many departures from automotive interior design conventions. BMW removed the traditional console mounted gear selector, replacing it with a steering-column mounted stalk[17][22] in favour of two cup holders. The e-brake is controlled using a button on the dashboard.[23] The seat adjustment controls were moved from their traditional place on the side of the seat base to the inside of the raised central console, which drew some criticisms.[20] Unlike most BMWs since 1975 (including the E65's predecessor and successor), the centre instrument panel is not angled towards the driver.[24]

Compared to the outgoing E38 model, the E65 7 Series has more shoulder room in the front and the rear, and increased rear headroom.

The E65 was the first BMW to use the iDrive infotainment system.[25] The system was built on the Windows CE for Automotive platform,[26] and featured an interface primarily based around a central control knob. Many of the functions such as climate, navigation, seat heating, telephony, and car settings were incorporated into a single system allowing for centralised control. Early versions of iDrive were criticised for complicated menu structures and a steep learning curve.[20][27]

The first generation of the system relied on CD media for map data. In March 2003, the maps switched to DVD format,[28] a faster processor was used and a 'Menu' and 'Customisable' button were added below the control knob. In 2005, dedicated buttons were added to change radio stations or skip tracks[29] and a brighter screen was used for the 8.8" widescreen option. 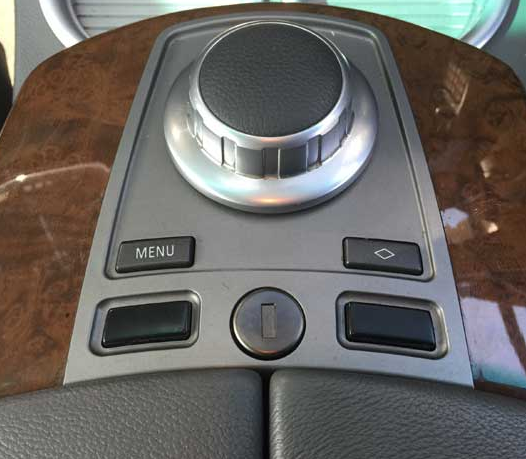 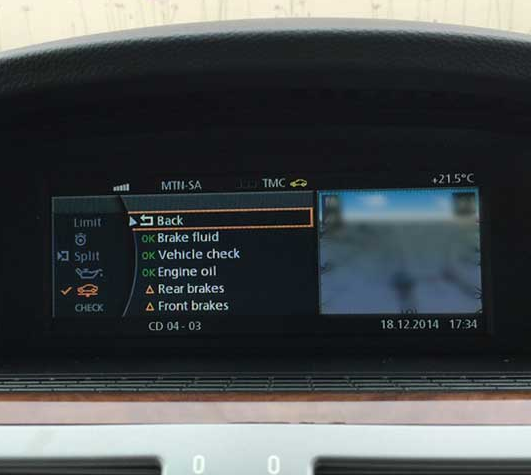 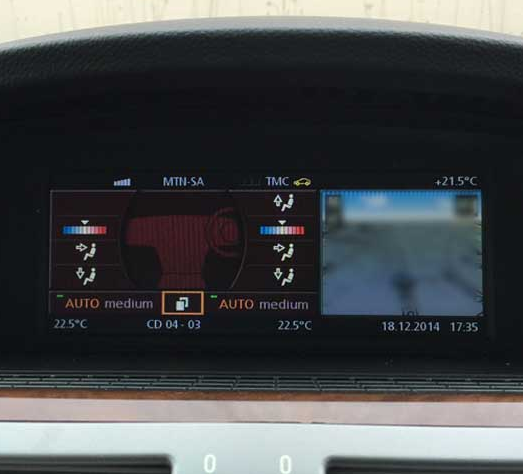 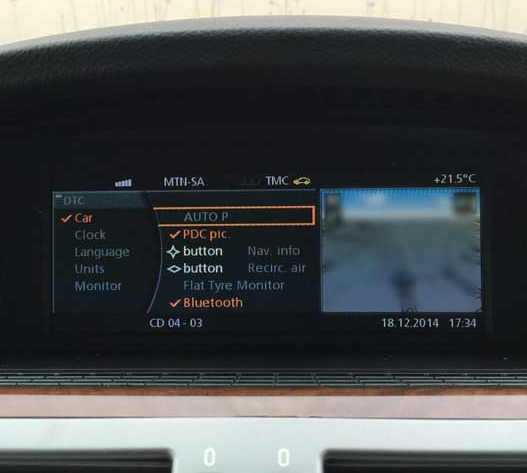 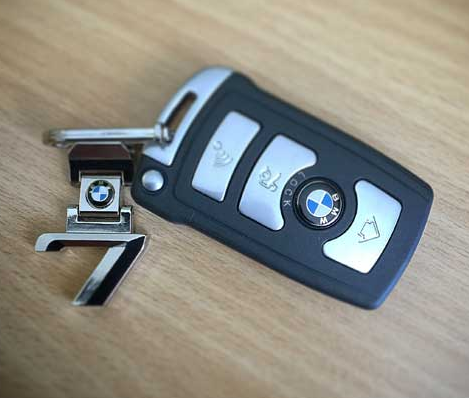 The E65 was the flagship model[30] and the most technologically advanced car produced by BMW at the time.

The following features were first introduced on the E65: 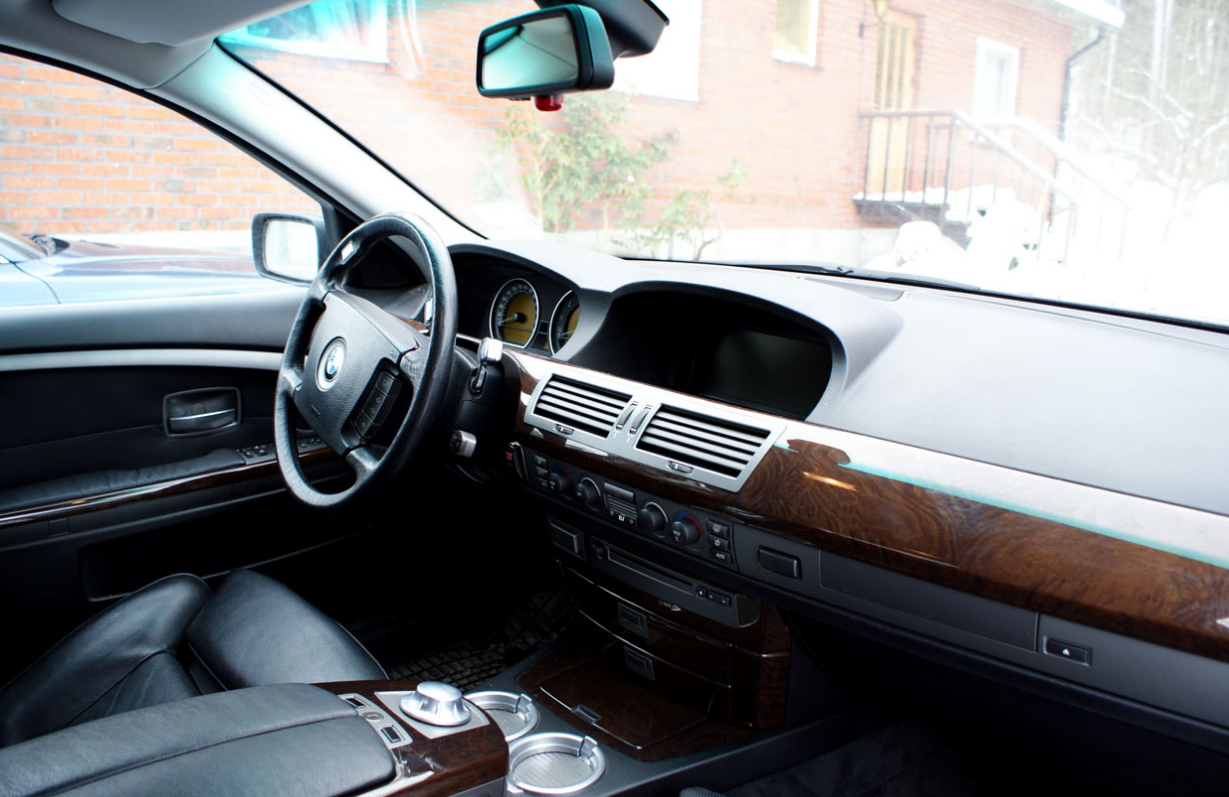 The available transmissions are:[39] 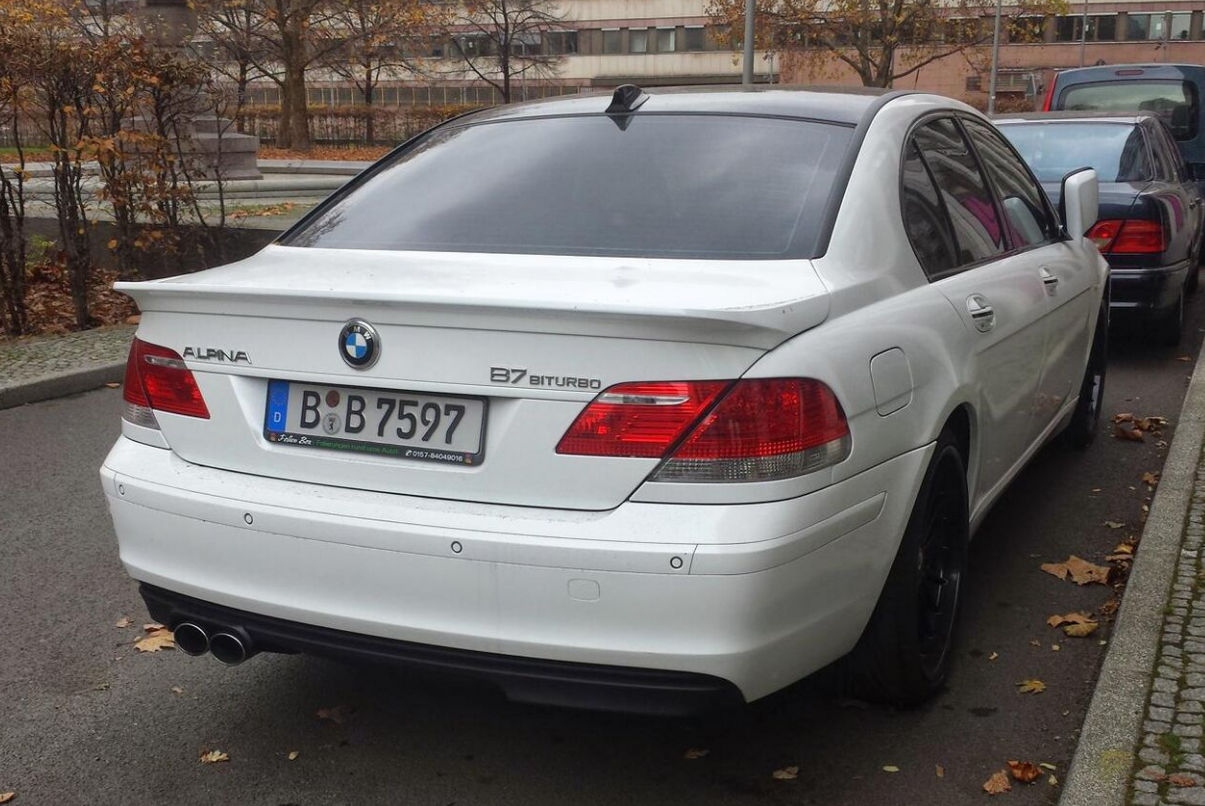 The Alpina B7 prototype was introduced to the public at the 2003 Geneva Motor Show in March, and the production version was later unveiled at the 2003 Frankfurt Motor Show.[40] Production began in February 2004,[41] and was built in the Dingolfing BMW plant alongside the regular E65 models.

The Alpina B7 uses a supercharged version of the 4.4-litre V8 found in the 745i, and was the first Alpina model to feature a supercharged engine.[42]

BMW offers a buyback service for High Security models up to 7 years old, which are inspected then resold to potential customers worldwide. A training course is also offered to owners and chauffeurs, and teaches car control in case of emergency situations.[46] 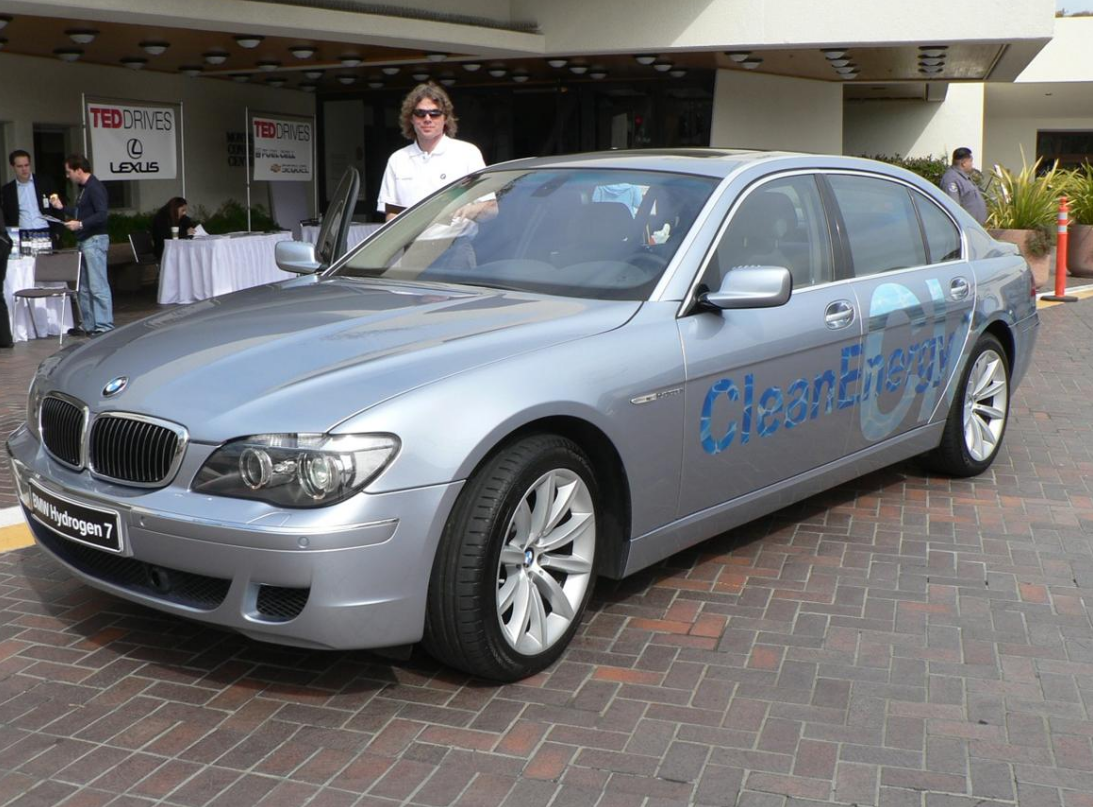 The BMW Hydrogen 7 is a limited production hydrogen-fueled model. It uses a modified version of the 760Li's N73 V12 engine, producing 191 kW (256 bhp). Claimed fuel economy is 50 L/100 km (4.7 mpg‑US) and the hydrogen is stored as a liquid in an insulated 170 L (45 US gal) tank. Only 100 cars were made, which were leased to high-profile customers, in order to promote the use of hydrogen vehicles.

The major changes are: 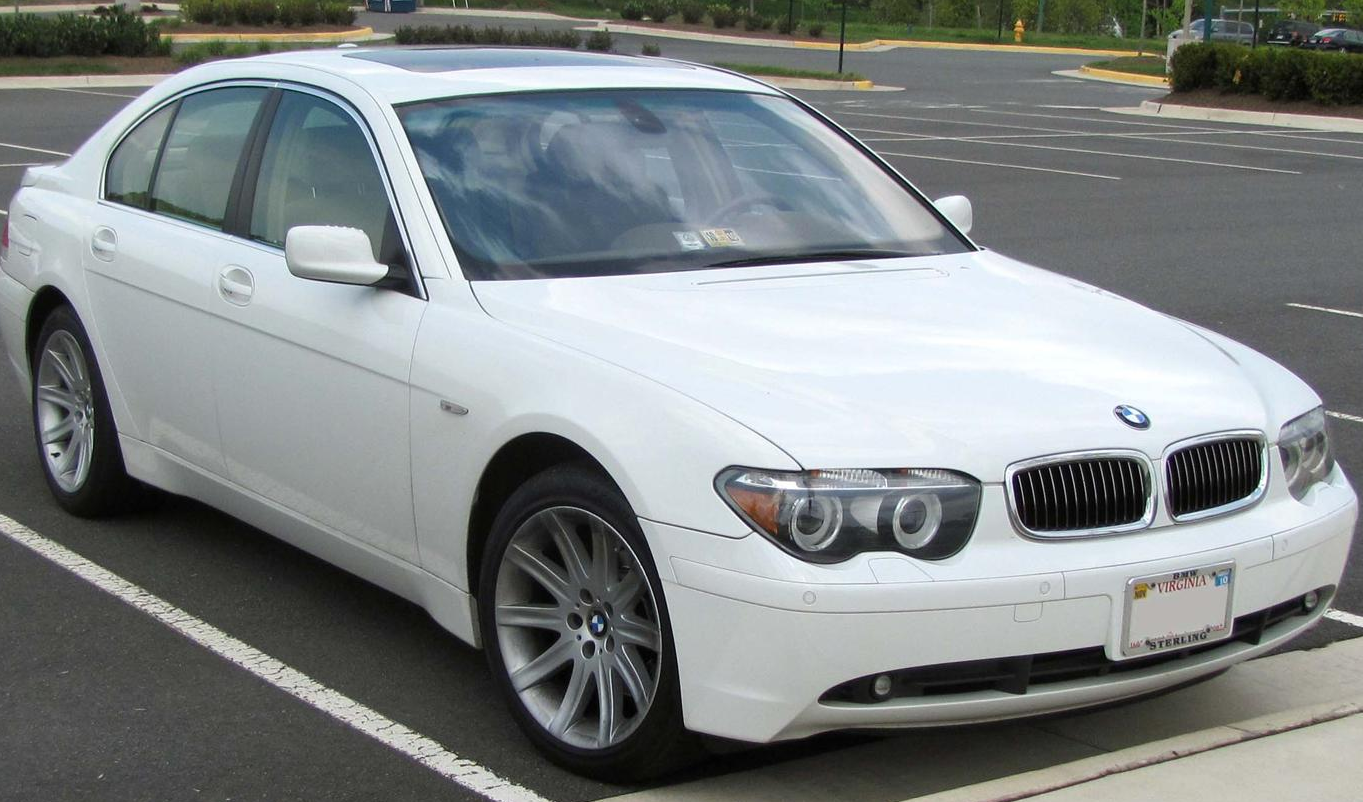 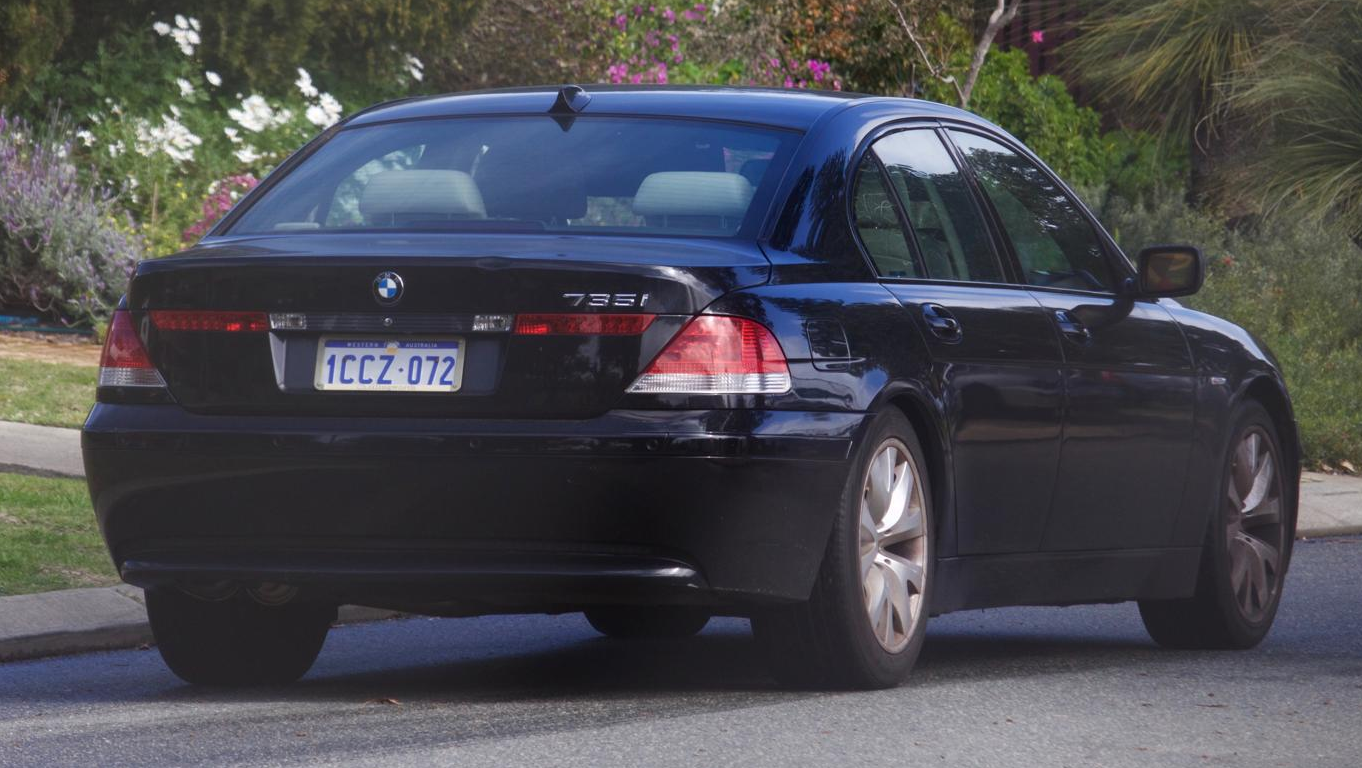 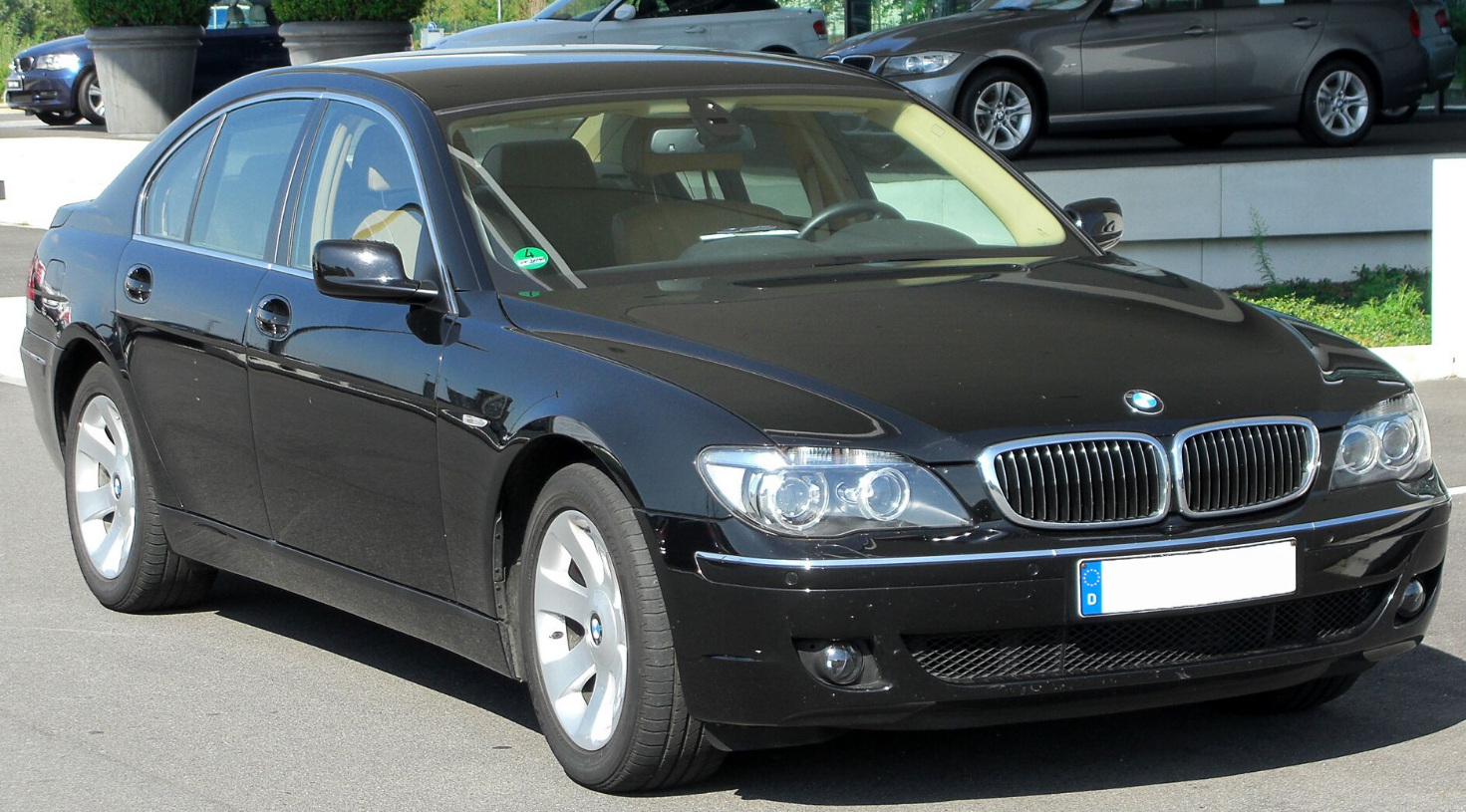 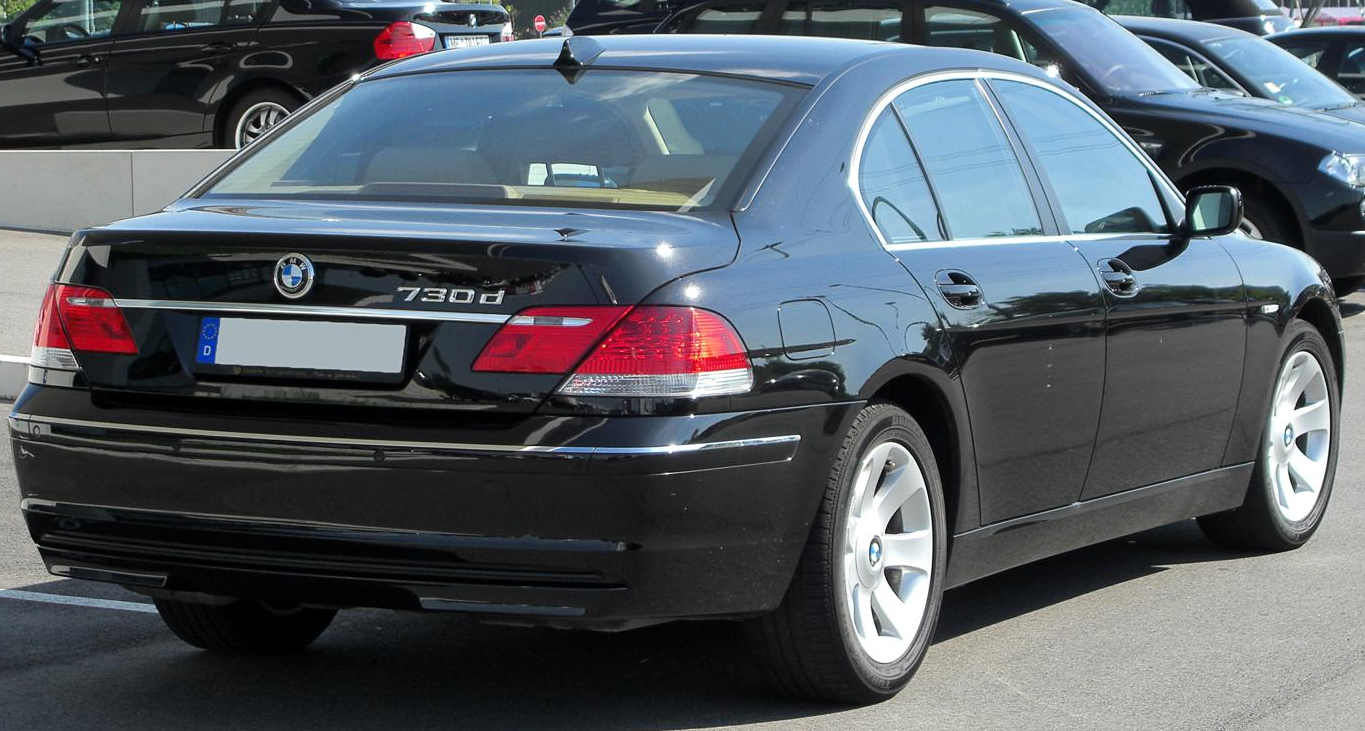 The following are production figures for E65 7 Series models:

More
©Text is available under the terms and conditions of the Creative Commons-Attribution ShareAlike (CC BY-SA) license; additional terms may apply. By using this site, you agree to the Terms and Conditions and Privacy Policy.
Upload a video for this entry
Information
Subjects: Transportation Science & Technology
Contributor MDPI registered users' name will be linked to their SciProfiles pages. To register with us, please refer to https://encyclopedia.pub/register :
HandWiki
View Times: 34
Entry Collection: HandWiki
Revision: 1 time (View History)
Update Time: 11 Nov 2022
Table of Contents
1000/1000
Hot Most Recent