+1 point
Thank you for your contribution! You can also upload a video entry related to this topic through the link below: https://encyclopedia.pub/user/video_add?id=34010
Check Note
2000/2000
Save Your Voice

Edit
Upload a video
The content is sourced from: https://handwiki.org/wiki/Social:Save_Your_Voice

Save Your Voice is a movement against internet censorship in India. It was founded by cartoonist Aseem Trivedi, journalist Alok Dixit, socialist Arpit Gupta and Chirag Joshi in January 2012. The movement was initially named "Raise Your Voice", before it was renamed. The movement started from Ujjain in Madhya Pradesh, under the frontier-ship of the movement's four founders; with a "Langda March" at Ujjain. The movement opposes the Information Technology Act of India and demands democratic rules for the governance of Internet. The campaign is targeted at the rules framed under the Information Technology Act, 2000.

The rules for blocking websites in India are governed by Section 69A of the Information Technology Act, 2000. This rule came into the power in 2008 after an amendment in the IT Act. Section 69A of the IT Act authorises the Central government, the power to direct either a government agency or an intermediary to block access to any website under a list of very specific circumstances.[1] If intermediary sites fail to comply with a blocking order, they may be punished with imprisonment and fines. Intermediaries include telecom service providers, blogging sites, online payment sites, e-mail service providers and Web hosting companies.[2]

The controversial Intermediary Due Diligence Rules, 2011 also take away the individual's right to free speech as it give power to intermediaries to decide the fate of the content.[3] This rule has been a subject of heated debate among civil societies, activists, journalists and parliamentarians. The annulment of this rule has also been demanded in the upper house of the parliament.[4]

The "Langda March" was an eye-catching protest against internet censorship. Protestors "disabled themselves" by bandaging their hands and feet, appearing handicapped. The crowd of "handicaps" marched across the roads in Ujjain, Meerut, Bangalore and Chennai.[5]

Save Your Voice celebrated April Fool's Day with Kapil Sibal, the IT Minister of India and named it as "Sibal's Day". This was a direct attack on the minister who had advocated pre-censorship for the content on the social media. Save Your Voice staged demonstrations at prominent locations like the Indian Parliament, India Gate, Jantar Mantar and the IT ministry of India with dummies of Kapil Sibal, who received postcards, messages and even garlands from passersby and supporters. The goal of this campaign was to rally public support in defense of free speech on the Internet.[6][7][8]

4. Freedom in the Cage

Freedom in the cage was a creative protest by Save Your Voice which got a huge public attention in New Delhi with demonstrators symbolically locked in cages to help raise awareness about the problem of web censorship in India. Artists, Journalists and bloggers had caged themselves to give the message to the government that artistes inside a cage playing the guitar or painting a canvas was equal to the government's IT rules that have "caged" the freedom of the people granted by the Constitution of India. The motive behind the protest was to explain that the newly notified Information Technology (Intermediaries Guidelines) Rules-2011 prescribing principles to be observed by the Internet companies was unconstitutional as it provided for a system of censorship by private parties, adversely affected the right of privacy, would hamper the growth of the Internet and slow down economic growth in the process and limit the growth of IT-related services and industries in particular.[9][10][11][12][13][14]

5. Annulment Motion in the Parliament

An annulment motion against the Information Technology (Inter-mediaries Guidelines) Rules, 2011 moved by Member of Parliament (MP) P. Rajeev of the Communist Party of India (Marxist) in the Rajya Sabha, was the first serious attempt by internet freedom activists to get the Information Technology (IT) Act, 2000 discussed and reviewed by the country's lawmakers. Save Your Voice supported the annulment motion and requested the political parties to support the motion in Rajya Sabha, the upper house of the Parliament. As expected, the motion (specifically against the rules governing intermediaries – clause (zg) of subsection (2) of Section 87 read with subsection (2) of Section 79 of the IT Act, 2000) was not carried. However, the discussion that preceded it at least demonstrated the concerns of parliamentarians about what internet freedom activists have termed the "draconian" provisions of the IT Act.[15][16] 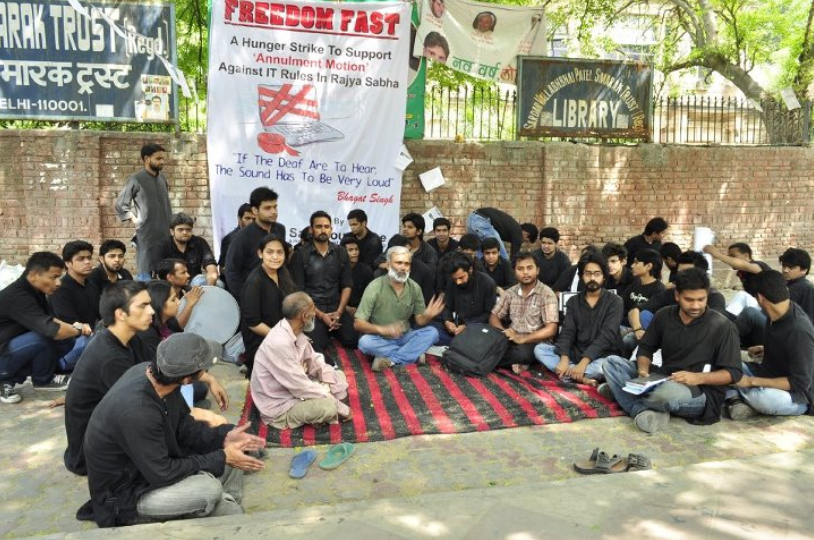 Save Your Voice supported the annulment motion brought by the MP P Rajeev and to put pressure on the government, two of the movement's campaigners, the cartoonist Aseem Trivedi and journalist Alok Dixit started a hunger strike. People from various streams and in favour of this cause have visited the campaigning activists at Jantar Mantar, and helped to keep their motive intact. Arvind Gaur, Director of Asmita Theatre (New Delhi) and a key member of India Against Corruption, also joined them with his associates and assured that he would extend his support for the fight for 'Freedom of Speech & Expression' in a full-fledged manner. The seven days long Anshan was ended when both were forced to end a hunger strike they began on 2 May. Their health had deteriorated considerably and they were hospitalised. The annulment motion in the Rajyasabha could not be passed and India joined the league of dictator nations where internet is not free. However, the hunger strike successfully highlighted the issue in the global media.[3][17][18][19][20][21][22][23][24]

The IT Rules 2011 were adopted in April last year as an addition to the 2000 Information Technology Act, which was amended in 2008. They require Internet companies to withdraw any content deemed objectionable, particularly if its nature is "defamatory", "hateful", "harmful to minors", or "infringes copyright" within 36 hours of being notified by the authorities, or face prosecution.

"This has turned technical intermediaries into Web censorship police informants," Reporters Without Borders said. "Although some content categories are justifiably objectionable, other more vague or subjective definitions could jeopardize informational content." The IT Rules also impose on cybercafé owners drastic regulations that violate personal data privacy and place a presumption-of-guilt burden on all Indian netizens.

India was added in March to the list of countries under surveillance in Reporters Without Borders' latest report on Internet Enemies.[17]

Masked members of Save Your Voice held a protest at Jantar Mantar in New Delhi against Indian government's attempts to restrict freedom on the Internet.[25] The protest in India was spearheaded by 'Save Your Voice' and 'Anonymous' at various historic monuments in 16 cities, of India. Save Your Voice conveners cartoonist Aseem Trivedi and activist Alok Dixit took active part in the networking between the International hacking group and Indian members of different civil society activists.[26][27]

The protest has resulted in access being denied to a host of websites that carry illegal copies of films and songs among other legal content, including isohunt.com and pastebin.com. The website of one of the Save Your Voice members, Trivedi, was also blocked by BigRock and against which the members protested and campaigned throughout India.[28] "The government is bringing censorship through the back door and we will oppose it," says Alok in one of his interviews with The Asian Age.[29] To register their protest, campaigners have also hacked the website of state-run telecom provider MTNL and pasted the logo of the Anonymous group, the mask of 17th century British revolutionary Guy Fawkes, on mtnl.net.in. MTNL's corporate website could not be accessed for over four hours, following the attack, but its individual city-specific websites (for Delhi and Mumbai) remained unaffected.[30]

Police in Maharashtra arrested Aseem Trivedi, a political cartoonist and the co-founder of the Save Your Voice campaign, on Saturday, 9 September 2012.[31] He faced charges of sedition, violating Internet security laws, and insulting national honour for publishing cartoons mocking national symbols and criticising corruption on his website, Cartoons Against Corruption.[32] After Trivedi's arrest, Save Your Voice ran a nationwide campaign against the arrest of the cartoonist.[33] The campaign received massive public support from civil society groups and artistan communities across borders. Mahesh Bhatt, a prominent Bollywood figure and film director, joined the press conference at Mumabi Press Club with Save Your Voice co-founder Alok Dixit supporting Trivedi's case.[34] Dixit has also mediated between the Home Minister RR Patil and Trivedi when Trivedi refused to take bail.[35]

6. Hunger Strike Against Sec 66A of IT Act

Save Your Voice initiated an indefinite hunger strike by Aseem Trivedi and Alok Dixit against IT Act Section-66A at Jantar Mantar on 8 December 2012, following various arrests of civilians expressing their views on social networking sites. This got a bigger public attention when activist turned politician Arvind Kejriwal joined this campaign and promised to make it a nationwide agenda. Both ended the fast after Arvind Kejriwal requested him not to waste his life and rather work towards 'uprooting the UPA government'.[36]

Independent Member of Parliament Rajeev Chandrasekhar has battled tirelessly against growing internet censorship in India, using his position in the upper house of parliament to challenge legislation that chokes digital freedom. Through numerous articles and speeches he has urged the government to revise the 2011 Information Technology Rules and repeal part of the 2008 act on which it is based. He has described both as a "serious risk" to democracy. Mr. Chandrasekhar has filed a Public Interest Litigation (PIL) in Supreme Court Challenging the IT Rules. The Supreme Court has issued Notice to the Government on the It Act.

Section 66A's misuse flows from its draconian nature and imprecise terminology. People can face up to three years of prison for electronic communications that "grossly" offend or cause "annoyance or inconvenience", or, in case of information known to be false, cause "danger, obstruction, insult, injury, criminal intimidation, enmity, hatred, or ill will". Together, this amounts to gagging citizens in a day and age the internet's an indispensable everyday platform for exchange of news and views.[37] Two girls Shaheen Dhada and Renu Srinivasan were arrested over a Facebook post, under sec 66 A, criticising the bandh like situation in Mumbai after Shiv Sena supremo Bal Thackeray's death. Another boy, under the same act, was arrested within a week for posting "vulgar" comments against MNS chief Raj Thackeray and the people of Maharashtra on the social networking site. The arrests of Jadavpur University professor Ambikesh Mahapatra for circulating a cartoon lampooning West Bengal's Chief Minister Mamata Banerjee, cartoonist Aseem Trivedi and businessman Ravi Srinivasan for tweets against Union Finance Minister P. Chidambaram's son Karti Chidambaram, have also sparked popular anger among civil societies.[38]

The movement specified eight particular reasons for which the indefinite hunger strike was commenced.[39] The reasons include ambiguity in the purpose of the section, lack of control over cyber harassment, inequality in legal implementation, excessive strictness, misuse for vendetta, comparatively harsh magnitudes of punishments, curb on harmless speech and the section's being open to abuse. The protest saw Aseem Trivedi hold a banner in his hand stating "I am a big supporter of freedom of speech, freedom of expression, freedom of thoughts."[40][41][42][43]

More
©Text is available under the terms and conditions of the Creative Commons-Attribution ShareAlike (CC BY-SA) license; additional terms may apply. By using this site, you agree to the Terms and Conditions and Privacy Policy.
Upload a video for this entry
Information
Subjects: Computer Science, Software Engineering
Contributor MDPI registered users' name will be linked to their SciProfiles pages. To register with us, please refer to https://encyclopedia.pub/register :
HandWiki
View Times: 10
Entry Collection: HandWiki
Revision: 1 time (View History)
Update Time: 11 Nov 2022
Table of Contents
1000/1000
Hot Most Recent