+1 point
Thank you for your contribution! You can also upload a video entry related to this topic through the link below: https://encyclopedia.pub/user/video_add?id=33843
Check Note
2000/2000
List of 16-bit Computer Hardware Palettes

Edit
Upload a video
The content is sourced from: https://handwiki.org/wiki/List_of_16-bit_computer_hardware_palettes

This is a list of notable 16-bit RGB color palettes, which were primarily manufactured from 1985 to 1995. Due to mixed-bit architectures, the n-bit distinction is not always a strict categorization.

Depending on the (proprietary) monitor type attached, it displays one of the 320×200, 16-colors and 640×200, 4-colors modes with the color monitor, or the high resolution 640×400 black and white mode with the monochrome monitor.

When the sixth bit-plane is used, two extra color modes can be set: Extra Half-Brite (EHB) and Hold-And-Modify (HAM).

In the EHB mode, 6-bits pixel points to one of the 32 colors in the palette with their lower 5-bits, and if the 6th bit is on, the bright of the color is halved (hence the name of this mode). So there are a total of 64 visible colors: the user chooses light versions of the first 32 colors and the system already provides their darker versions.

In the HAM mode, the two higher bits of the 6-bits pixels are used as a four state command. Three of the states changes only the red, green or blue component of the pixel respect of the precedent in the scan line, and hold the other two RGB components. The new value for the modified color component is in the four lower bits. The remaining command state forces the pixel value to be one of the 16 first values of the palette, whose indice is in the four lower bits of the pixel. So it is very important to have a well selected palette, or the color will spread easily among consecutive pixels in the scan line of the image. This mode can display all of the 4,096 colors simultaneously.

Apple IIgs, along with full compatible graphic modes with the Apple II, features a custom Video Graphics Chip (VGC)[1] which supports a 12-bit RGB, 4,096-color palette. It has an extended set of 320×200 and 640×200 graphic modes, (called Super High-Res modes by Apple) with different (and a bit complex) color modes: 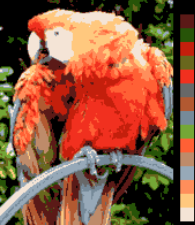 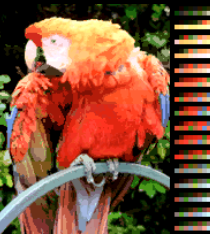 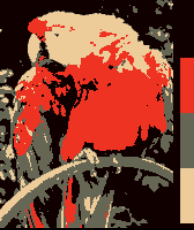 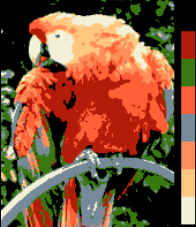 Also, along with the one of 16 palettes, to each scan line the Apple IIgs VGC is able to assign individual 320 or 640 horizontal resolution independently.

The Enhanced Graphics Adapter (EGA) supports all CGA modes and add three more: two 320×200 and 640×200 graphic modes, both with the full CGA 16-color palette (intended to be used with the same "digital RGB" CGA color monitor of 200 scan lines) and an extra 640×350 graphic mode with 16 colors chosen from a 6-bit RGB (64 colors) palette for what IBM then called an "analog RGB" type monitor.[2]

The word analog means here that the RGB signals can have more than the bare two possible levels 0 and 1; (as the so-called —by IBM— "digital RGB" CGA monitor type has) despite of its name, colors are produced digitally, so there exists binary (quantized) steps for every primary RGB signal (two bits, four levels per primary, in this case). Thus, the EGA signal from the computer to this kind of monitor had two wires for each primary red, green and blue. Later, true analog connectors were developed by IBM for the more advanced MCGA and VGA display adapters and monitors, (see the next section) which are unrelated to (and incompatible with) the EGA "analog" monitors.

Some early EGA cards shipped only 64 KiB of video memory, (the nominal was 128KiB, up to a maximum of 256 KiB to allow more screen pages in memory) so the 640×350 graphic mode provides only four colors. This was never a proper mode by itself, and therefore was not popular.

Monochrome "analog" monitors also existed for EGA. The colors are then mapped internally to the correspondent luminance gray, (the sum of the 30% of the red signal, the 59% of the green and the 11% of the blue) giving a 16-shades from a 64-grayscale palette. "Positive" class monitors inverts the signal, providing that the default EGA colors for text modes (black background and white foreground) displays reversed, (white background and black foreground) as if were a printed document.

The Multicolor Graphics Array (MCGA) and Video Graphics Array (VGA) used a 6-bits per channel, 64 levels Digital-to-Analog Converter (DAC) to give an 18-bit RGB palette (262,144 colors), from which can be selected any 2, 16, or 256 at a time.[2] They both provided full compatibility with CGA modes, while VGA included all the EGA modes as well as the MCGA modes. When connected to analog monochrome monitors, they offered 64 levels of grey. Some of the first portable PCs featured a flat monochrome plasma display with a VGA in shades of red.

The IBM 8514/A uses the 18-bit RGB palette from which the user could select any 256 at a time in both 640×480 and 1024×768 graphic modes. It does not support compatibility with VGA modes, but a VGA card is usually already installed and bridged to the 8514/A to provide a single output cable for a single monitor which can display any of all VGA and 8514/A possible modes.

In the 1990s, most manufacturers adhered to the VESA BIOS Extensions (VBE), used for enabling standard support for advanced video modes (at high resolutions and color depths).

They are the direct predecessors, not the IBM 8514/A nor XGA, of actual graphic display PC hardware.

More
©Text is available under the terms and conditions of the Creative Commons-Attribution ShareAlike (CC BY-SA) license; additional terms may apply. By using this site, you agree to the Terms and Conditions and Privacy Policy.
Upload a video for this entry
Information
Subjects: Computer Science, Theory & Methods
Contributor MDPI registered users' name will be linked to their SciProfiles pages. To register with us, please refer to https://encyclopedia.pub/register :
HandWiki
View Times: 98
Entry Collection: HandWiki
Revision: 1 time (View History)
Update Time: 10 Nov 2022
Table of Contents
1000/1000
Hot Most Recent