Submitted Successfully!
Thank you for your contribution! You can also upload a video entry related to this topic through the link below:
https://encyclopedia.pub/user/video_add?id=3378
Check Note
2000/2000
Natural Polypropionates
Edit
Upload a video
This entry is adapted from 10.3390/md18110569

Natural polypropionates (PPs) are a large subgroup of polyketides constructed by C3-units. One of the main characteristics to distinguish the PPs is the regularly interspaced methyl groups in the polyketide chain or the cyclic polyketide core, which are driven directly from propionate unit or from the acetate-methionine motif.

Natural polypropionates (PPs) are a large subgroup of polyketides constructed by C3-units. Most of the PPs are discovered from marine organisms including mollusks, fungi and actinomycetes, while some of them are also isolated from terrestrial resources. One of the main characteristics to distinguish the PPs is the regularly interspaced methyl groups in the polyketide chain or the cyclic polyketide core, which are driven directly from propionate unit or from the acetate-methionine motif. Due to their flexible biosynthetic connections, polypropionate derivatives always perform abundant structural diversities. Moreover, they also play as important building blocks in the biosynthesis of several kinks of antibiotics such as macrolides, polyether and cyclic peptides. While some of the polypropionate metabolites exert an ecological influence in the organisms, most of them have been demonstrated to exhibit various kinds of bioactivities, especially antitumor and antimicrobial effects [1]. The first propionate-derived metabolite was isolated from marine mollusk Tridachiella diomedea in 1978, which was identified as tridachiosne through X-ray diffraction by C. Ireland and D.J. Faulkner. [2] Since then, there has been an increasing number of PPs with different structural features reported from nature or by genomic engineering. However, the only review in the past reported by Michael T. Davies-Coleman and Mary J. Garson summarized 168 PPs from marine resources up to the end of 1997 [3] and there is no additional updated review in the past two decades.

The new compounds can be divided into three main groups according to their structure features: the first one is linear molecular (8%), the second one is cyclic polypropionate (76%) and the last one is macrocyclic derivatives (16%). Moreover, it can be noticed that the cycle containing PPs is the most abundant group with the largest proportion, which can be further distributed into five subcategories shown in the pie chart of Figure 1: carbocyclic (10%), pyran derivatives (47%), furan derivatives (9%), pyran and furan containing (6%) and other cyclic analogues (4%). We will present their isolation, structure and bioactivities in detail. 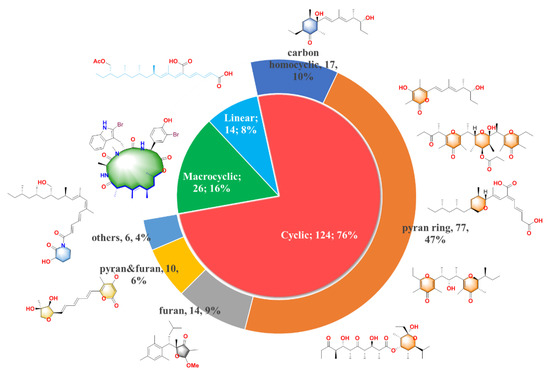 The linear polypropionate derivatives are a relatively rare group discovered from nature, which are driven directly from propionate pathway or acetate-methionine pathway. From 1999 to 2020, 14 linear analogues have been isolated from marine mollusks, microorganisms, terrestrial plants and insects (Figure 2 and Figure 3). 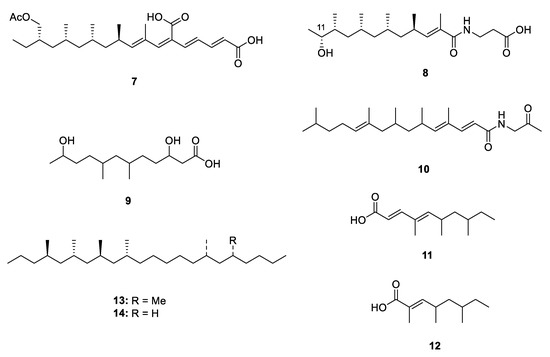 Caribbean marine sponge Discodermia dissolute collected from Grand Bahama Island yielded an amide containing polypropionate 5-hydroxymethyldiscodermolate (1) [4] with 13 chiral centers. The absolute configuration was determined by a comparison of the NMR data with those of the methanolysis product derived from the known polypropionate discodermolide [5]. Compound 1 exhibited strong cytotoxicity against murine P388 leukemia and human lung adenocarcinoma A549 cell lines with the IC50 values of 65.8 and 74 nM, respectively. Exiguaone (2) [6] was isolated from the lipidic extract of Mediterranean cephalaspidean mollusk Haminoea exigua while micromelones A and B (3 and 4) [7] were isolated from marine gastropod Micromelo undata. The absolute configuration of them remains unknown. The chemical investigation of two species of South African mollusk Siphonaria led to the discovery of two new linear PPs, (6E,8E,10S,12S)-3-hydroxy-4,6,8,10,12-pentamethylpentadeca-6,8-dien-5-one (5) and (2E,4S,6S,8S)-2,4,6,8-tetramethyl-2-undecenoic acid (6) [8][9]. The stereochemistry of 6 was further elucidated by oxidative degradation.

Microorganisms, especially the terrestrial fungi, are the potential source of natural PPs. Six new PPs, including two linear ones, fiscpropionates C and F (7 and 8) [10], were isolated from the deep-sea-derived fungus Aspergillus fischeri, which represented the first discovery of polypropionate derivatives from the deep-sea-derived fungus. The absolute configuration at C-11 of 8 was deduced by the modified Mosher’s method. In the bioassays, 7 was detected to show strong noncompetitive inhibitory effects against Mycobacterium tuberculosis protein tyrosine phosphatase B (MptpB) with the IC50 value of 4.0 µM. A limestone soil-derived fungus Penicillium decumbens yielded an aliphatic acid 3,11-dihydroxy-6,8-dimethyldodecanoic acid (9) [11] which constructed a polypropionate fragment in the aliphatic chain. The bioassay-guided fractionation of the actinobacterium Saccharothrix xinjiangensis collected from Caspian Sea beach led to isolation of a N-containing polypropionate saccharonoic acid (10), which exhibited weak inhibitory activity against Mucor hiemalis and Candida albicans (IC50: 66.7 and 33.4 µg/mL) [12]. Xylarinic acids A and B (11 and 12) were antifungal PPs from the fruiting body of Xylaria polymorpha [13].

Two linear metabolites were also isolated from a terrestrial insect. 4,6,8,10,16,18-hexa- and 4,6,8,10,16-pentamethyldocosanes (13 and 14) were two major methylated hydrocarbons obtained from cane beetle species Antitrogus parvulus [14][15], and their absolute configuration was established by a series of chemical conversion, chromatographic and spectroscopic comparisons.

The macrocyclic metabolites covered in this section are chosen to illustrate the structural features and biological activities because their biosynthetic pathway involves propionates. Twenty-six related derivatives were concluded belonging to two families: mangromicins family from an actinomycete and jaspamide family from mollusks.

The mangromicin analogues possess a complicated cyclopentadecane skeleton and show antitrypanosomal and ROS scavenging activities (Figure 4). Takuji Nakashima and his co-workers discovered nine mangromicins A‒I (135–143) using a physical-chemical screening system in the actinomycete Lechevalieria aerocolonigenes K10-0216 [16][17][18]. Although an X-ray diffraction of 135 was carried out, the absolute configuration could not be determined by the unreliable Flack parameter—0.1 (3). Thus, only the relative configuration of mangromicins was assigned. 135 and 136 exhibited antitrypanosomal activities against Trypanosoma brucei brucei with the IC50 values of 2.4 and 43.4 µg/mL. Besides, except for 136, 139 and 143, all mangromicin analogs had more potent DPPH scavenging activity than α-tocopherol.

Jaspamide derivatives, with a propionate chain in the macro ring, are a group of cyclodepsipeptides driven from the NRPS-PKS hybrid biosynthetic pathway (Figure 5). In 1998 and 2008, Angela Zampella and his co-workers published four papers to describe the isolation and bioactivities of 14 jaspamide derivatives jaspamides B‒P (144–157) from the sponge Jaspis splendans. The stereochemistry was elucidated by comparing the NMR data with those of the metabolites containing the same fragments. All the jaspamides isolated from J. splendans exhibited significant cytotoxicities against different human cancer cell lines [19][20][21][22]. Chemical investigation of another Pacific marine sponge Popestela candelabra led to the isolation of another three unusual jaspamide analogues pipestelides A‒C (158–160), which contain a bromotyrosine [3-amino-3-(bromo-4-hydroxyphenyl)propanoic acid] unit, a polypropionate with a Z configuration at Δ3, and a 2-hydroxyquinolinone unit, respectively [23]. 158 exhibited strong inhibitory activities against the KB cell line with the IC50 value of 0.11 µM.

The marine organisms (mainly the mollusks) are the dominant source of these PPs. It is worth noting that the culturable fungi and actinomycetes (not only from marine system but also from terrestrial resources) are becoming a more important source for the discovering of PPs. The modern molecular biological approaches including the genomic mining and heterologous expression will promote the rapid discovery of structural novel and biologically active PPs from fungi.

The assignment of the absolute configuration, especially the chiral centers in the side chain, remains a major obstacle for the structure identification of natural PPs. Nearly half of the natural PPs were reported without identifying the stereochemistry or with establishing the relative configuration only. In general, the configuration of the chiral centers at the cyclic core can be determined by NOE correlations and the quantum chemical calculation of ECD spectra, and the Mosher’s method is an effective approach to establish the hydroxyl-substituted chiral centers at the side chain. However, the assignment of methylated chiral centers at the side chain is the most difficult. Some methods such as chemical degradation, spectroscopic comparisons and semi-synthesis from the know precursors have been tried to solve the issue but are always limited by their instability or the small amount of the compounds obtained. The X-ray diffraction of a crystal with high-quality through Cu Kα can give a direct sight of the planar and absolute configuration; nevertheless, due to the flexibility of the side chain, the high-quality crystals of most PPs are still hard to obtain. In recent years, some advanced methods have been applied to solve the stereochemistry of the methylated side chain such as the C-H coupling constant, NMR data guided conformer searching, 13C NMR calculations, etc. Some interdisciplinary technologies, for example, the “crystal sponge” [24][25][26], will also provide some efficient solutions of the stereochemistry of PPs in the future. Moreover, inspired by their diverse complex structures and stereochemistry, an increasing total synthesis or semisynthesis of PPs has been carried out by chemists around the world [27].

Although nearly half of the natural PPs have been discovered to show potential pharmacological properties, few of them were selected to be lead compounds for further development of new drugs, which may be limited by the small amounts of compounds isolated from nature and the difficulty of obtaining the synthetic substitutes. Therefore, the multi-targeted screening and deeper biological mechanisms of PPs should be put on the agenda in the future.

More
© Text is available under the terms and conditions of the Creative Commons Attribution (CC BY) license; additional terms may apply. By using this site, you agree to the Terms and Conditions and Privacy Policy.
Upload a video for this entry
Information
Subjects: Pharmacology & Pharmacy
Contributor MDPI registered users' name will be linked to their SciProfiles pages. To register with us, please refer to https://encyclopedia.pub/register :
Weimin Zhang
View Times: 271
Revisions: 2 times (View History)
Update Time: 07 Dec 2020
Table of Contents
1000/1000
Hot Most Recent