+1 point
Thank you for your contribution! You can also upload a video entry related to this topic through the link below: https://encyclopedia.pub/user/video_add?id=33775
Check Note
2000/2000
Degree of Ambition and Renewable Energy in Shipping

The use of biofuels, hydrogen and natural gas as ship propulsion fuels has been proposed [1][2]. However, biofuels from food plants compete at once with agriculture for soils, potentially causing more difficulties than they solve in the long run. Cellulosic ethanol is also troublesome since it extracts supplements from crop soils [3][4] and will contest with methane and olefins generation for crop misuse in a post-carbon economy [5]. Algae-based biofuels could be deployed in the next ten years, but they must first overcome several unsolved challenges that make their adoption uncertain as a widely available fuel [6]. The European Biofuels Technology Platform defines, first, second and third generation biofuels as follows: (Figure 1): 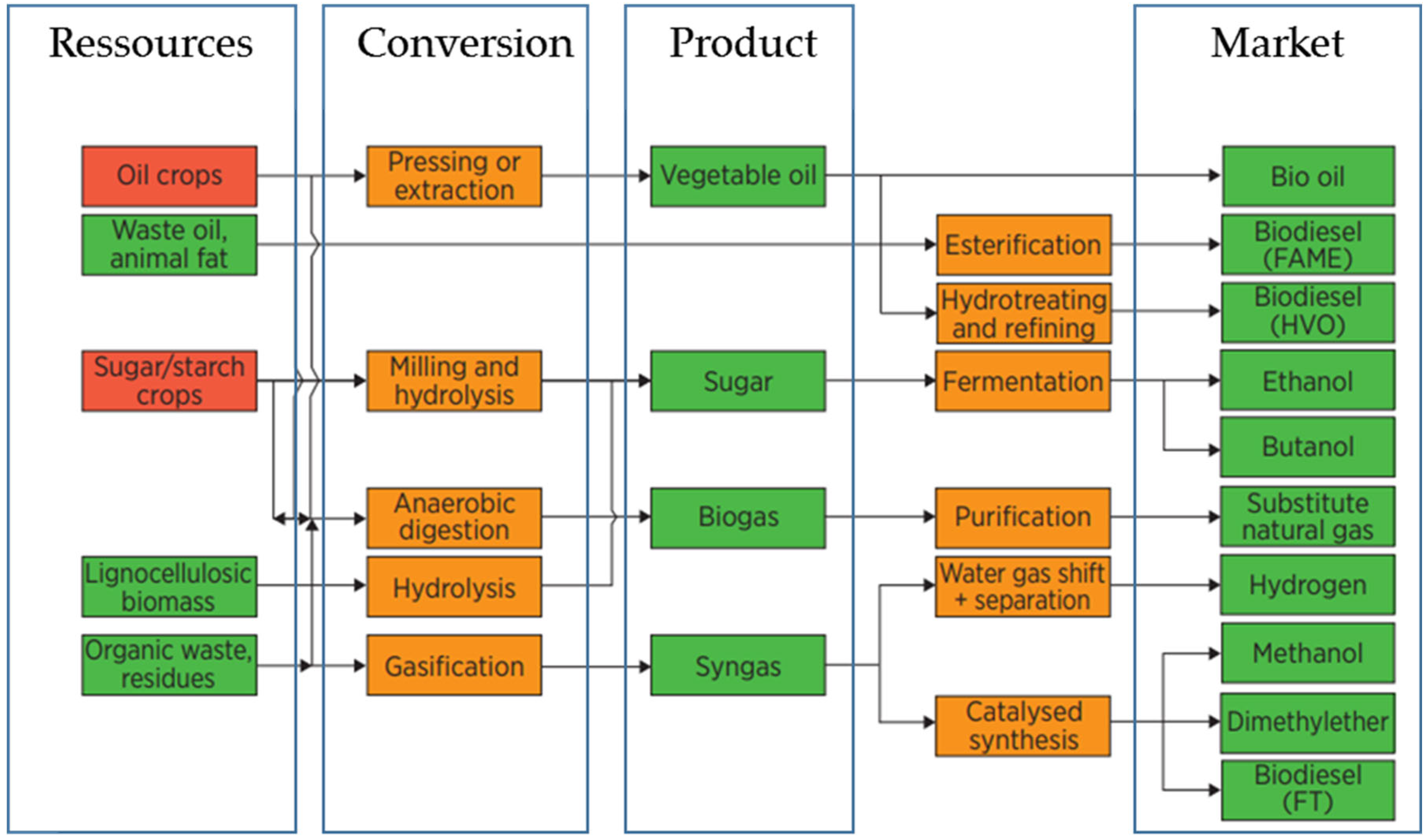 Figure 1. Synopsis of traditional and advanced biofuels production pathways [1].
In the transportation industry, biofuels are now the foremost pertinent elective for supplanting or blending with gasoline or diesel [7]. However, in the shipping business, utilization and experience are limited [8]. The challenge with biofuels in the maritime sector is a lack of experience and understanding in handling and implementing biofuels as a part of their energy source. Another challenge is the vast quantity of biofuels must-have to feed the maritime sector [9]. Consequently, sustainable biofuel production is restrained by food costs, land availability, and societal considerations [10]. Furthermore, there are concerns about biofuel storage and oxidation steadiness, thus further investigation and research are required [1][9]. Nonetheless, a mix of legislation, regulations, encouragements, and technological and root upgrades could assist the shipping industry to build a considerable market for biofuels.
Hydrogen propulsion in ships is technically possible, but it requires large-scale implementation of hydrogen infrastructures for production, shipping, storage and port services, which is at present yet to be determined. Furthermore, as hydrogen has a very low flaming temperature, burning hydrogen–air mixtures near stoichiometric composition can result in chaotic pre-ignition practices and high combustion temperatures, resulting in substantial oxide of nitrogen (NOx) emissions [11]. Moreover, hydrogen is more appropriated as a fuel for a spark-ignition engine than a compression-ignition engine, which could be a problem for the shipping market.
For diesel ignition engines, natural gas could attain climate uniformity in 30 years [7], but it must be produced responsibly in a future 100% sustainable economy. Natural gas might be created viably by fermenting farm and urban waste and using the Sabatier process to combine electrolytic H2 with carbon dioxide (CO2). The first means will also be the origin of methane needed for the manufacturing of ammonia in a post-carbon economy, at least during the conversion to totally organic agriculture. As a result, the second means would be better in the long run. If the heat generated in the reaction and CO2 emitted by industrial operations are repurposed, it might achieve efficiencies of 55–56% [12][13].

Soft sails mounted on tall spar are a tried-and-true technique used for primary or secondary propulsion [8]. Soft sails are simple to adapt to existing ships or include in new ship designs.
According to a 2015 European Commission study for the periodic 1-Seagate Sail [14], a hybrid wind plus motor cruising mode resulted in 20% fuel savings for commercial vessels. As a result, prices and polluting emissions are reduced by 20%. In response to the sociological and environmental issues posed by developing marine legislation, Seagate Sail and cruise control will provide a reliable and advantageous solution for commercial vessel owners to lower fuel expenses and minimize emissions.
Several Japanese ships were modified with fixed wings in the 1980s to reduce fuel consumption. The oil crisis of the 1970s, which resulted in oil deficits and skyrocketing oil prices, was a major driving force behind this. However, the crisis ended, and when costs plummeted in the 1980s, the cost-effectiveness of stiff sails was questioned. Despite this, Japanese ships equipped with solid sails, such as the Shin Aitoku Maru and Usuki Pioneer, demonstrated that solid sails reduced fuel consumption. Fuel savings of 10-30% have been reported on ships equipped with JAMDA sails [15].

Flettner Rotors use the Magnus effect for propulsion, which occurs when wind passes through a pivoting cylinder [16][17][18]. It was first shown on several ships in the 1920s. However, the technique was mainly forgotten until the early 1980s when French Captain Jacques Cousteau and his research team integrated the turbo-sail, a non-rotating fan-driven variant, on their research vessel. In 2010, the German company Enercon tested the 12,800 dwt E-SHIP 1 on board its ship, which has four Flettner rotors powered by the exhaust gases from of the principal turbine generator [19] (Figure 2). Adapting Flettner rotors to tankers and bulkers is being looked into, even though board space use for various ship classes is vital. According to [19], the E-ship 1 with Flettner rotors consumes up to 25% less fuel than similar traditional merchant ships. 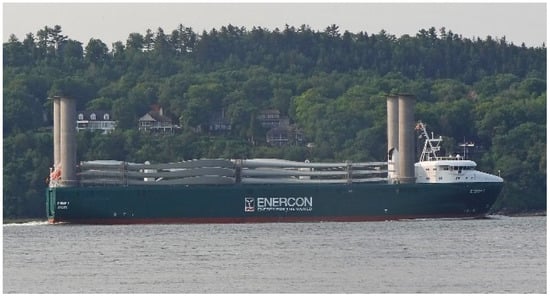 Kite sails are linked to the ship’s bow and perform at high altitudes to take advantage of strong wind speeds. The kite sail can help shipowners save 10–35% on annual fuel costs [20]. The MS Michael A. was the first container ship that used a kite sail in part [8][15].

Photovoltaic (PV) cells use the photoelectric effect to generate electricity directly from sunlight [21]. PV cells suffer two fundamental challenges, even though this is a rapidly expanding technology with rapid progress: (1) insufficient space aboard a vessel and (2) the need for battery-based energy storage [8][22]. PV cells are further constrained by the risk of corroding due to saltwater [23][24] and by intermittency concerns. Finally, it’s worth noting that solar energy’s potential for reducing emissions is limited.
Smith et al. [25] assume a “0.1–3%reduction in auxiliary engine fuel use,” while Bouman et al. [26] predict a CO2 reduction potential of 0.2–12%. Based on the investigations of Smith et al. [25] and Bouman et al. [26], an average improvement of 1.5% in auxiliary fuel saving and 6% in possible CO2 cutting is considerable and encouraging. On the other hand, PV systems aboard vessels need more research and development because of the corrosive nature of the marine environment. Their potential is therefore lower aboard vessels than it is on land.

Solar PV cells offer potential when it comes to recharging shore battery systems. This is only significant for especially short shipping [27]. It can also supplement other forms of electricity for most shore-side infrastructures. Yuan, Y. et al. [28], claim that a ship’s fuel consumption and CO2 emissions can be reduced by 4% and 8,5%, respectively, by adopting hybrid solar energy power.

More
© Text is available under the terms and conditions of the Creative Commons Attribution (CC BY) license; additional terms may apply. By using this site, you agree to the Terms and Conditions and Privacy Policy.
Upload a video for this entry
Information
Subjects: Automation & Control Systems; Engineering, Environmental; Green & Sustainable Science & Technology
Contributors MDPI registered users' name will be linked to their SciProfiles pages. To register with us, please refer to https://encyclopedia.pub/register :
Mohamad Issa
,
Adrian Ilinca
,
Fahed Martini
View Times: 67
Revisions: 2 times (View History)
Update Time: 14 Nov 2022
Table of Contents
1000/1000
Hot Most Recent