+1 point
Thank you for your contribution! You can also upload a video entry related to this topic through the link below: https://encyclopedia.pub/user/video_add?id=33689
Check Note
2000/2000
'Phags-Pa Script

Edit
Upload a video
The content is sourced from: https://handwiki.org/wiki/Social:%27Phags-pa_script

The ‘Phags-pa script (Mongolian: дөрвөлжин үсэг "Square script") is an alphabet designed by the Tibetan monk and State Preceptor (later Imperial Preceptor) Drogön Chögyal Phagpa for Kublai Khan, the founder of the Yuan dynasty, as a unified script for the written languages within the Yuan. The actual use of this script was limited to about a hundred years during the Mongol Yuan dynasty, and it fell out of use with the advent of the Ming dynasty. The documentation of its use provides clues about the changes in the varieties of Chinese, the Tibetic languages, Mongolian and other neighboring languages during the Yuan era.

The Uyghur-based Mongolian alphabet is not a perfect fit for the Middle Mongol language, and it would be impractical to extend it to a language with a very different phonology like Chinese. Therefore, during the Yuan dynasty (circa 1269), Kublai Khan asked 'Phags-pa to design a new alphabet for use by the whole empire. 'Phags-pa extended his native Tibetan alphabet, one of the Brahmic scripts, to encompass Mongol and Chinese, evidently Central Plains Mandarin.[1] The resulting 38 letters have been known by several descriptive names, such as "square script" based on their shape, but today are primarily known as the 'Phags-pa alphabet.

Despite its origin, the script was written vertically (top to bottom) like the previous Mongolian scripts. It did not receive wide acceptance, and was not a popular script even among the elite Mongols themselves, although it was used as an official script of the Yuan dynasty until the early 1350s[2] when the Red Turban Rebellion started. After this it was mainly used as a phonetic gloss for Mongolians learning Chinese characters. It was also used as one of the scripts on Tibetan currency in the twentieth century, as script for Tibetan seal inscriptions from the Middle Ages up to the 20th century and for inscriptions on the entrance doors of Tibetan monasteries. 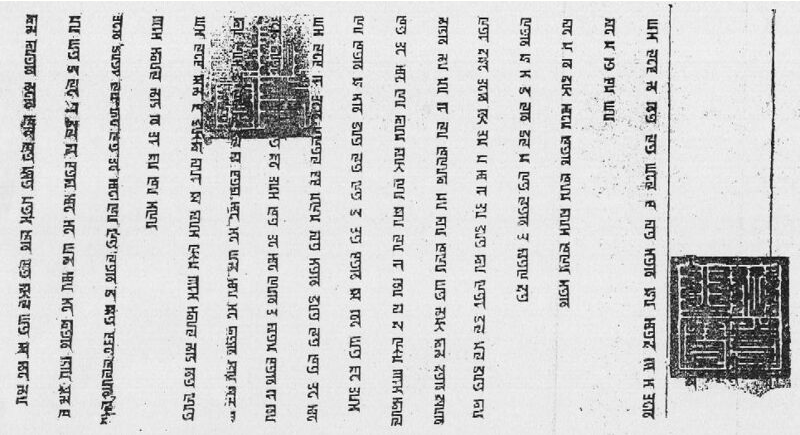 An imperial edict in 'Phags-pa. https://handwiki.org/wiki/index.php?curid=1492118 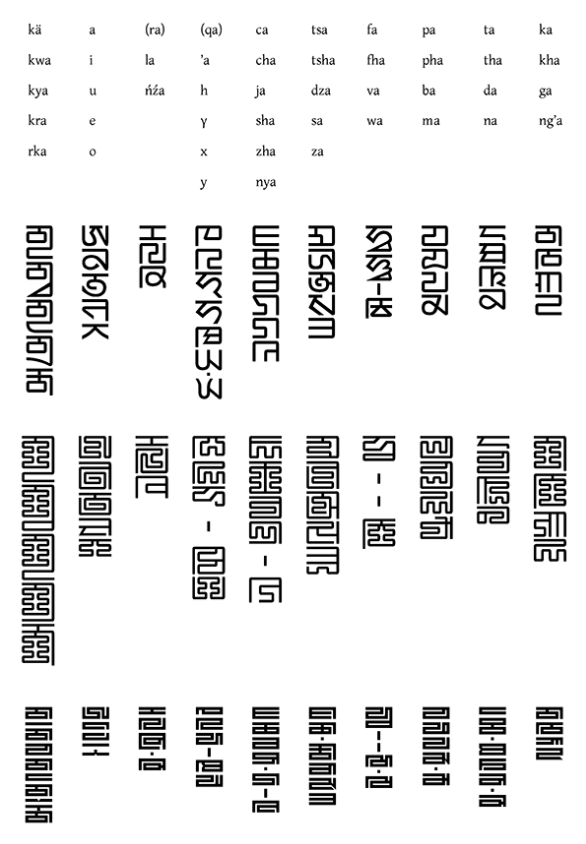 The 'Phags-pa script, with consonants arranged according to Chinese phonology. At the far left are vowels and medial consonants. Top: Approximate values in Middle Chinese. (Values in parentheses were not used for Chinese.) Second: Standard letter forms. Third: Seal script forms. (A few letters, marked by hyphens, are not distinct from the preceding letter.) Bottom: The "Tibetan" forms. (Several letters have alternate forms, separated here by a • bullet.) https://handwiki.org/wiki/index.php?curid=1781744

Unlike the ancestral Tibetan script, all 'Phags-pa letters are written in temporal order (that is, /CV/ is written in the order C–V for all vowels) and in-line (that is, the vowels are not diacritics). However, vowel letters retain distinct initial forms, and short /a/ is not written except initially, making 'Phags-pa transitional between an abugida and a full alphabet. The letters of a 'Phags-pa syllable are linked together so that they form syllabic blocks.

'Phags-pa was written in a variety of graphic forms. The standard form (top, at right) was blocky, but a "Tibetan" form (bottom) was even more so, consisting almost entirely of straight orthogonal lines and right angles. A "seal script" form (Chinese 蒙古篆字 měnggǔ zhuànzì "Mongolian Seal Script"), used for imperial seals and the like, was more elaborate, with squared sinusoidal lines and spirals.

Korean records state that hangul was based on an "Old Seal Script" (古篆字), which Gary Ledyard believes to be 'Phags-pa and a reference to its Chinese name "蒙古篆字" (měnggǔ zhuànzì). (See origin of hangul.) However, it is the simpler standard form of 'Phags-pa that is the closer graphic match to hangul.

Following are the initials of the 'Phags-pa script as presented in the Menggu Ziyun. They are ordered according to the Chinese philological tradition of the 36 initials.

'Phags-pa script was added to the Unicode Standard in July 2006 with the release of version 5.0.

More
©Text is available under the terms and conditions of the Creative Commons-Attribution ShareAlike (CC BY-SA) license; additional terms may apply. By using this site, you agree to the Terms and Conditions and Privacy Policy.
Upload a video for this entry
Information
Subjects: Language & Linguistics
Contributor MDPI registered users' name will be linked to their SciProfiles pages. To register with us, please refer to https://encyclopedia.pub/register :
HandWiki
View Times: 23
Entry Collection: HandWiki
Revision: 1 time (View History)
Update Time: 09 Nov 2022
Table of Contents
1000/1000
Hot Most Recent