+1 point
Thank you for your contribution! You can also upload a video entry related to this topic through the link below: https://encyclopedia.pub/user/video_add?id=33675
Check Note
2000/2000
Paschen's Law

Edit
Upload a video
The content is sourced from: https://handwiki.org/wiki/Chemistry:Paschen%27s_law

Early vacuum experimenters found a rather surprising behavior. An arc would sometimes take place in a long irregular path rather than at the minimal distance between the electrodes. For example, in air, at a pressure of one atmosphere, the distance for minimal breakdown voltage is about 7.5 μm. The voltage required to arc this distance is 327 V, which is insufficient to ignite the arcs for gaps that are either wider or narrower. For a 3.5 μm gap, the required voltage is 533 V, nearly twice as much. If 500 V were applied, it would not be sufficient to arc at the 2.85 μm distance, but would arc at a 7.5 μm distance.

Paschen found that breakdown voltage was described by the equation[1]

The graph of this equation is the Paschen curve. By differentiating it with respect to [math]\displaystyle{ pd }[/math] and setting the derivative to zero, the minimal voltage can be found. This yields

and predicts the occurrence of a minimal breakdown voltage for [math]\displaystyle{ pd }[/math] = 7.5×10−6 m·atm. This is 327 V in air at standard atmospheric pressure at a distance of 7.5 μm.

For air at standard conditions for temperature and pressure (STP), the voltage needed to arc a 1-metre gap is about 3.4 MV.[3] The intensity of the electric field for this gap is therefore 3.4 MV/m.

The electric field needed to arc across the minimal-voltage gap is much greater than what is necessary to arc a gap of one metre. At large gaps (or large pd) Paschen's Law is known to fail. The Meek Criteria for breakdown is usually used for large gaps. It takes into account non-uniformity in the electric field and formation of streamers due to the build up of charge within the gap that can occur over long distances. For a 7.5 μm gap the arc voltage is 327 V, which is 43 MV/m. This is about 14 times greater than the field strength for the 1.5-metre gap. The phenomenon is well verified experimentally and is referred to as the Paschen minimum.

The equation loses accuracy for gaps under about 10 μm in air at one atmosphere[4] and incorrectly predicts an infinite arc voltage at a gap of about 2.7 micrometres. Breakdown voltage can also differ from the Paschen curve prediction for very small electrode gaps, when field emission from the cathode surface becomes important.

The mean free path of a molecule in a gas is the average distance between its collision with other molecules. This is inversely proportional to the pressure of the gas, given constant temperature. In air at STP the mean free path of molecules is about 96 nm. Since electrons are much smaller, their average distance between colliding with molecules is about 5.6 times longer, or about 0.5 μm. This is a substantial fraction of the 7.5 μm spacing between the electrodes for minimal arc voltage. If the electron is in an electric field of 43 MV/m, it will be accelerated and acquire 21.5 eV of energy in 0.5 μm of travel in the direction of the field. The first ionization energy needed to dislodge an electron from nitrogen molecule is about 15.6 eV. The accelerated electron will acquire more than enough energy to ionize a nitrogen molecule. This liberated electron will in turn be accelerated, which will lead to another collision. A chain reaction then leads to avalanche breakdown, and an arc takes place from the cascade of released electrons.[5]

Collisions reduce the electron's energy and make it more difficult for it to ionize a molecule. Energy losses from a greater number of collisions require larger voltages for the electrons to accumulate sufficient energy to ionize many gas molecules, which is required to produce an avalanche breakdown.

On the left side of the Paschen minimum, the [math]\displaystyle{ pd }[/math] product is small. The electron mean free path can become long compared to the gap between the electrodes. In this case, the electrons might gain large amounts of energy, but have fewer ionizing collisions. A greater voltage is therefore required to assure ionization of enough gas molecules to start an avalanche.

The number of created electrons is

[math]\displaystyle{ \Gamma_i }[/math] is the ion current. To keep the discharge going on, free electrons must be created at the cathode surface. This is possible because the ions hitting the cathode release secondary electrons at the impact. (For very large applied voltages also field electron emission can occur.) Without field emission, we can write 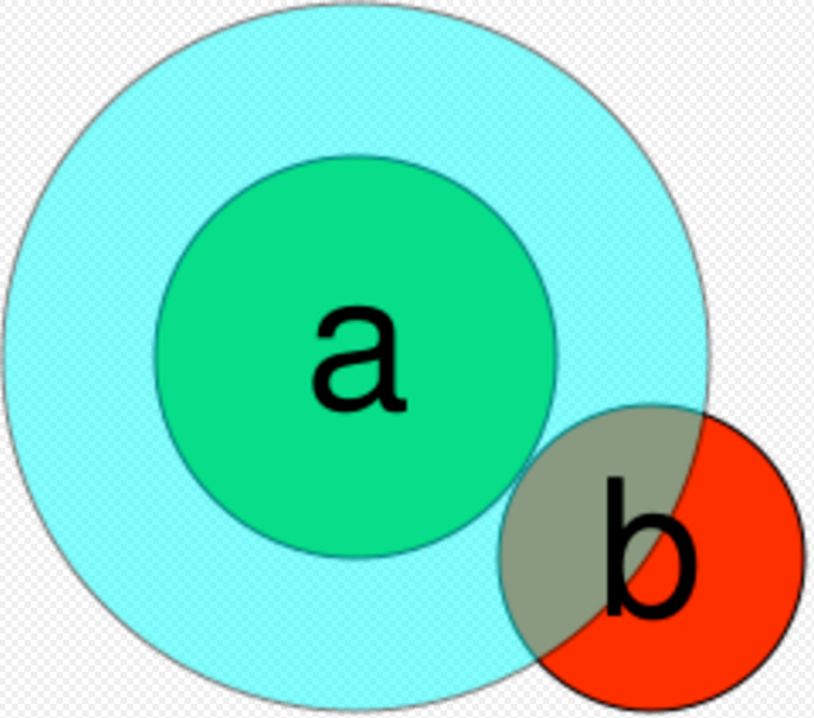 Visualization of the cross-section [math]\displaystyle{ \sigma }[/math]: If the center of particle b penetrates the blue circle, a collision occurs with particle a. So the area of the circle is the cross-section and its radius [math]\displaystyle{ r }[/math] is the sum of the radii of the particles. https://handwiki.org/wiki/index.php?curid=2028553

[math]\displaystyle{ N }[/math] is the number of molecules which electrons can hit. It can be calculated using the equation of state of the ideal gas

where the factor [math]\displaystyle{ L }[/math] was only introduced for a better overview.

This differential equation can easily be solved:

Plasma ignition in the definition of Townsend (Townsend discharge) is a self-sustaining discharge, independent of an external source of free electrons. This means that electrons from the cathode can reach the anode in the distance [math]\displaystyle{ d }[/math] and ionize at least one atom on their way. So according to the definition of [math]\displaystyle{ \alpha }[/math] this relation must be fulfilled:

Ionization potentials differ between molecules, as well as the speed that they recapture electrons after they have been knocked out of orbit. All three effects change the number of collisions needed to cause an exponential growth in free electrons. These free electrons are necessary to cause an arc.

More
©Text is available under the terms and conditions of the Creative Commons-Attribution ShareAlike (CC BY-SA) license; additional terms may apply. By using this site, you agree to the Terms and Conditions and Privacy Policy.
Upload a video for this entry
Information
Subjects: Physics, Particles & Fields
Contributor MDPI registered users' name will be linked to their SciProfiles pages. To register with us, please refer to https://encyclopedia.pub/register :
HandWiki
View Times: 98
Entry Collection: HandWiki
Revision: 1 time (View History)
Update Time: 09 Nov 2022
Table of Contents
1000/1000
Hot Most Recent