+1 point
Thank you for your contribution! You can also upload a video entry related to this topic through the link below: https://encyclopedia.pub/user/video_add?id=33640
Check Note
2000/2000
Face with Tears of Joy Emoji

Edit
Upload a video
The content is sourced from: https://handwiki.org/wiki/Social:Face_with_Tears_of_Joy_emoji

thumb|Appearance in the EmojiOne emoji set|167x167px Face with Tears of Joy (😂) is an emoji featuring a jovial face laughing, while also crying out tears. It can also be used for joking and teasing. It is the most commonly used emoji on social media websites such as Facebook, Snapchat, Twitter and Instagram. The emoji is also variously known as the lol emoji, joy emoji, laughing emoji or the laughing crying emoji.

The creation and early development of emojis dates back to the late 1990's in Japan. Although an earlier set of emoji had appeared on the J-Phone in 1997, with limited adoption due to high prices,[1] the first popular emoji set is attributed to Japanese telecommunications planner and NTT DoCoMo employee Shigetaka Kurita in 1999, who sketched illustrations after coming up with the idea of adding simple images to NTT DoCoMo's texting feature.[2][3] These were deployed on DoCoMo's i-Mode service.[1] When Apple released the first iPhone in 2007, there was an emoji keyboard intended for Japanese users only.[3] However, after iPhone users in the United States discovered that downloading Japanese apps allowed access to the keyboard, pressure grew to expand availability of the emoji keyboard beyond Japan, and in 2011, Apple made it a standard iOS feature worldwide.[3] Global popularity of emojis then surged in the early to mid-2010s.[4]

The Face with Tears of Joy emoji is encoded as follows: 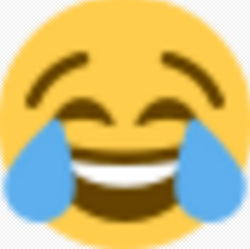 In the mid-2010s, the emoji became mainstream; on June 5, 2014, FiveThirtyEight noted that the "Face with Tears of Joy" emoji (😂) was the second most used emoji on the Twitter platform, appearing in 278+ million tweets, only behind the "Hearts" emoji (♥️)'s 342+ million figure.[12] Oxford University Press partnered with the mobile technology business SwiftKey to explore frequency and usage statistics for global popular emoji usage, detailing that in 2015, 😂 was chosen as Oxford Dictionaries' Word of the Year because it was the most used emoji, globally, in that respective year.[4] In a blog post, Oxford Dictionaries expressed that the emoji "was chosen as the 'word' that best reflected the ethos, mood, and preoccupations of 2015."[13] SwiftKey further detailed that the emoji made up 20% of all the emojis used in the UK in 2015, and 17% of those in the US, up from 4% and 9% respectively, in 2014.[4] Oxford Dictionaries president Caspar Grathwohl explained Oxford's choice, stating, "emoji are becoming an increasingly rich form of communication, one that transcends linguistic borders."[2]

On World Emoji Day 2017, Facebook founder and CEO Mark Zuckerberg shared the ten most used emojis on the Facebook platform; the Face with Tears of Joy emoji ranked #1 globally, as well as in United Kingdom.[16] The emoji was also one of the top three most used globally on Facebook's Messenger app.[17] Also during the observance, SwiftKey announced that the emoji was the most used in the United Kingdom during 2016.[18] In 2017, Time (magazine) reported that for the third consecutive year the emoji "[reigned] supreme on social media".[19]

Twitter users voted this as the most popular emoji "of all time" in 2017, granting it the Lifetime Achievement Award in Emojipedia's annual World Emoji Awards announced on the trading floor of the New York Stock Exchange for World Emoji Day.[20][21]

In November 2013, Brenden Gallagher of Complex ranked the "Laughing Crying Face" emoji at #2 in his "Emoji Power Rankings", writing that "research courtesy of Complex Stats and Information indicates that the Laughing Crying Face has almost reached a point of complete saturation".[22] In response to Oxford's choice to make "😂" their word of the year in 2015, Slate staff writer Katy Waldman commented that "😂 [is] the right linguistic incarnation of yet another complicated year, not to mention a good commentary on the very act of choosing a word of the year. What does it mean? Is it good or bad? It depends! With [the emoji's] intense and inscrutable emotional lability, [it] is less of a word and more of an invitation to invent some sort of meaning".[23]

Regarding the reasoning behind the emoji's popularity, Fred Benenson, author of Emoji Dick, commented that "it is versatile. It can be used to convey joy, obviously, but also 'I'm laughing so hard I'm crying.' So you've got two basic, commonly occurring human emotions covered."[6] Benenson also attributed the emoji's popularity to it being one of the better designed emojis from Apple.[6] Abi Wilkinson, a freelance journalist writing for The Guardian , opined that the Face with Tears of Joy emoji is "the worst emoji of all", describing it as an "obnoxious, chortling little yellow dickhead [with] bulbous, cartoonish tears streaming down its face".[24]

More
©Text is available under the terms and conditions of the Creative Commons-Attribution ShareAlike (CC BY-SA) license; additional terms may apply. By using this site, you agree to the Terms and Conditions and Privacy Policy.
Upload a video for this entry
Information
Subjects: Cultural Studies
Contributor MDPI registered users' name will be linked to their SciProfiles pages. To register with us, please refer to https://encyclopedia.pub/register :
HandWiki
View Times: 30
Entry Collection: HandWiki
Revisions: 2 times (View History)
Update Time: 09 Nov 2022
Table of Contents
1000/1000
Hot Most Recent