Submitted Successfully!
Thank you for your contribution! You can also upload a video entry related to this topic through the link below:
https://encyclopedia.pub/user/video_add?id=3324
Check Note
2000/2000
Halogen Bonds
Edit
Upload a video
This entry is adapted from 10.3390/cryst10111057

A halogen bond (XB) is a broader class of noncovalent interaction, which was defined by the International Union of Pure and Applied Chemistry (IUPAC) in 2013[1]. This definition states that “A halogen bond occurs when there is evidence of a net attractive interaction between an electrophilic region associated with a halogen atom in a molecular entity and a nucleophilic region in another, or the same, molecular entity.” A structural scheme for XB is shown in Figure 1.

2. The History Perspective of XB

The investigation of the XB traces back to 200 years ago. The I2···NH3 halogen-bonded complex was synthesized by Colin in 1814 after iodine was found by chance and separated in 1812 [5]. However, the precise molecular constituent of the iodine/polyiodide complex was ascertained by Guthrie only 50 years later[6]. The complexes involved Br and Cl as electron acceptor species and were first reported in the late 19th century by Remsen and Norris[7]. However, the first compound, referred to as F2, was reported nearly 80 years later when the F3− anion could be isolated under very extreme conditions[8][9][10]. Moreover, the adducts of F2···NH3 and F2···OH2 did not arise until the 1990s[11]. These early-stage experimental data show that the XB strength is closely related to the polarizability of the XB donor atom, that is, F < Cl < Br < I. In fact, F without polarization cannot easily participate in XB and can serve as an XB donor only when connecting with exceedingly strong electron-withdrawing groups. A critical interest in the stereo electronic evaluation of the XB was supported by computational studies on the electron density distribution of halogen atoms in the early 1990s. The studies by T. Brinck, P. Politzer, and J. S. Murray were particularly noteworthy when they revealed the anisotropic charge distribution on halogen atoms forming one covalent bond[12][13][14], and supported the theoretical basis of the definition of the “σ-hole”: a region of barren and constantly positive electrostatic potential on the surface of halogen atoms. In 2007, a seminal paper by Clark[15] et al. proposed a subtle method of interpreting many properties of XB via the σ-hole. A symposium devoted to the XB was organized by IUPAC in 2009, and some features of the interaction were acknowledged. In 2013, the definition of the XB by IUPAC finally gained the agreement of the scientific community, based on the self-assembly and recognition processes determined by electrophilic halogens. This topic has been well-established, used, and understood up until now.

3. The Investigation and Application of XB Focus on Crystal Engineering

Over the last seven decades, supramolecular synthesis has attracted great interest from chemists wanting to fabricate new materials based on noncovalent interactions[16][17][18][19][20]. Different self-assembly strategies have been proposed, and new supramolecular systems will be achieved by considering the relevant scientific literature across the years[18][21][22][23]. To design and synthesize supramolecular self-assembled materials, molecular building blocks with designed functions can be used to self-assemble ordered structures. The self-assembly process can happen in any dimension, which is the comprehensive outcome of the balanced steric effect, shape complementarity, and specific anisotropic interactions in the assembly process. For example, supramolecular synthesis could be involved in fabricating molecular organic frameworks[24][25], molecular acceptors [26], responsive materials[27], organogels [28][29], polymers [30] and biomimetic systems[31][32][33], as well as in nanoparticle self-assembly[34][35].

In 1968, Bent[36] published an overall review on the crystal structures of XB systems and discussed at length the structural chemistry of donor–acceptor interactions in bulk crystals, in which the XB and the hydrogen bond (HB) were compared based on their similarities, such as the short interatomic distances and high directionality. Crystal engineering is a self-assembly process in which building blocks can fabricate architectures following the laws of intermolecular interactions and shape complementarity[17][37][38][39][40]. Many noncovalent interactions, for example, HB, XB[41], π−π stacking, metal−ligand coordination, dipole−dipole interactions, and hydrophobic interactions, were used to fabricate molecular crystals. Among these weak interactions, HB is commonly used based on its high directionality and moderate strength (25−40 kJ/mol). However, XB similar to HB has not been developed as HB because of the misunderstanding associated with halogen atoms that neutral entities in dihalogens or fully negative elements in halocarbon moieties could not form strong attractive interactions. In general, the strength of XB is closely related to the magnitudes of the positive and negative areas of the electrostatic potential (ESP). Furthermore, the other chemical factors, such as the electronegativity and polarizability of X atoms[42], the hybridization of the carbon atom bound to the XB donor sites[43], and strong electron-withdrawing moieties[44][45], directly affect the magnitudes of the positive and negative areas so as to tune the strength of the XB indirectly.

The directionality of XB refers to the angle between the R−X covalent bond and the X···X or Y noncovalent bonds as θ2 shown in type-II XB (Figure 2)[46][47]. The great directionality of such XB is attributed to the bond formation. The nucleophile enters the σ-hole of the halogen atom, which is narrowly confined on the elongation of the R−X covalent bond axis. The R−X···Y angle between the covalent and noncovalent bonds around the halogen is approximately 180°[46][47]. Although HB is another simple type of σ-hole interaction, the positive regions on linked hydrogens tend to be almost hemispherical due to hydrogen having only one electron[48][49][50]. Therefore, the XB is a particularly directional interaction compared to the HB. In 1963, the R−X···X−R bond with different contact geometries was proposed by Sakurai[44] et al., which was classified as type-I and type-II, as illustrated in Figure 2 [51]. There is a clear geometric and chemical distinction between type-I and type-II X···X interactions. The type-I interaction is not XB according to the IUPAC definition. It is a geometry-based contact arising from the close-packing requirement, which is observed for all halogens. The type-II interaction arises from the pairing between the electrophilic area on one halogen atom and the nucleophilic area on the other[52]. Moreover, many investigations reveal that the type-II interaction is most favored by the order of iodinated derivatives > brominated derivatives > chlorinated derivatives. 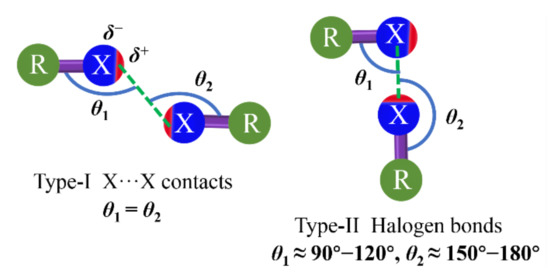 In addition, halogen atoms are typically regarded as hydrophobic residues. For example, an I or Br atom is less hydrophilic than a typical HB donor such as an OH or NH group. From the nature of the discrepancy between the two donor sites arise many useful and complementary applications.

4. The General Description of XB in 2D Crystal Engineering

Similar to 3D self-assembly processes, the molecular self-assembly process on surfaces can be controlled by balancing molecule–molecule and molecule–substrate interactions[46][47][51][52][53]. The intermolecular non-covalent bond of XB with high directionality, moderate bond strength (5–30 kJ/mol), and its binding geometry has been used to fabricate 2D nanostructures[40][54][55][56][57][58][59]. Because of the large size of the halogen atom and the existence of the σ-hole, XB is more sensitive to the steric hindrance and directionality than HB[4][60]. However, as a powerful tool to tune the 2D nanoarchitectures on surfaces, halogens are usually involved in forming HB (total interaction energies up to 140 kJ/mol), where they sever as Lewis bases, and the strength of HBs involving halogens varies with F > Cl > Br > I [61]. Perhaps they can form XBs serving as Lewis acids with an opposite trend, meaning that the strength of the interaction can be tuned by varying halogen substituents. This trend depends on the strength of the σ-hole, which in turn relates to the electron-withdrawing ability of the group. Significantly, XBs are independent from HBs, so both types of interactions can be used to design and adjust supramolecular 2D assemblies on the surface at the same time.

Scanning tunneling microscopy (STM) is a powerful tool that can be used to probe the surface locally and provide structural information in a submolecular resolution whether the nanostructure is crystalline or amorphous[62][63]. The instrument can be used in diverse types of environments such as ultra-high vacuum (UHV), air, and liquid. The temperature of the surface can be precisely controlled (ranging from ~4 K up to a few hundred Kelvin) in a vacuum, which permits both controlled annealing and imaging at low temperatures. UHV provides an ultra-clean environment, which is essential for quantifying supramolecular interactions that are relatively hard to be understood in the solution phase. The solution phase offers a “real-life” view of the assembly process involved in the competition of molecule–solvent and solvent–substrate interactions, except for the molecule–molecule and molecule–substrate interactions[64].

This review will concentrate on our recent research work about 2D supramolecular assembled systems associated with XBs in ambient conditions. Through this review, a comprehensive discussion of supramolecular self-assembled adlayers stabilized by various XBs will be provided. Though it is much more likely to be accepted that the HB is a relatively stronger intermolecular interaction than the XB. In some cases, the XB can be of equivalent strength or even stronger than the typical HB. XB has been widely used to direct and control assembly processes depending on the molecular recognition[40][65][66][67][68][69][70]. However, the studies of XBs in 2D surface crystal engineering only date back to the last 15 years. Therefore, this is a hot topic in an ongoing research field, and there are many unknown mechanisms that need to be explored.

More
© Text is available under the terms and conditions of the Creative Commons Attribution (CC BY) license; additional terms may apply. By using this site, you agree to the Terms and Conditions and Privacy Policy.
Upload a video for this entry
Information
Subjects: Chemistry, Physical
Contributor MDPI registered users' name will be linked to their SciProfiles pages. To register with us, please refer to https://encyclopedia.pub/register :
Xinrui Miao
View Times: 852
Revisions: 2 times (View History)
Update Time: 08 Dec 2020
Table of Contents
1000/1000
Hot Most Recent