Submitted Successfully!
Thank you for your contribution! You can also upload a video entry related to this topic through the link below:
https://encyclopedia.pub/user/video_add?id=332
Check Note
2000/2000
Microalloyed Niobium Steel
Edit

Thermomechanical processing of niobium microalloyed steel was performed with the purpose of determining the interaction between niobium precipitates and dislocations, as well as determining the influence of the temperature of final deformation on the degree of precipitation and dislocation density. Two variants of thermomechanical processing with dierent final rolling temperatures were carried out. Samples were studied using electrochemical isolation with an atomic absorption spectrometer, transmission electron microscopy, X-ray diraction analysis, and universal tensile testing with a thermographic camera. The results show that the increase in the density of dislocations before the onset of intense precipitation is insignificant because the recrystallization process takes place simultaneously. It increases with the onset of strain-induced precipitation. It is shown that niobium precipitates determine the density of dislocations. The appearance of Lüders bands was noticed as a consequence of the interaction between niobium precipitates and dislocations during the subsequent cold deformation. In both variants of the industrial process performed on the cold deformed strip, Lüders bands appeared.

Figure 1. (a) Schematic of the final deformation (FD) and (b) the change in the degree of deformation.

Samples for testing were taken at characteristic spots from each phase of thermomechanical treatment. Sampling was carried out in such a way that the strip was stopped at a chosen moment. Then, the samples of interest from the deformation zone and its vicinity were rapidly cooled by applying the maximum amount of cooling water onto the rollers. In this way, the structural development and the processes involved in each phase of thermomechanical finishing were blocked. Reductions in the samples were determined using various methods of analysis. For electrochemical isolation, samples in the form of a plate with dimensions 80 mm × 20 mm were electrolytically dissolved in a cell according to the method described by W. Koch [1]. The isolate was identified using an atomic absorption spectrophotometer (AAS, Perkin Elmer, Waltham, MA, USA). The size and distribution of niobium precipitates, as well as their interaction with dislocations, were analyzed using a transmission electron microscope (TEM, JEOL-2000, Tokyo, Japan). For analysis by TEM, samples were prepared using the foil method. For that purpose, samples in the form of a cylinder with a diameter of 3 mm were used. They were mechanically ground on 600 and 1000 grit papers and then electrolytically thinned to a fully transparent foil. Electrolytical thinning was performed in a solution of 5% HClO4 and 95% CH3COOH using a voltage of 45 V at room temperature. The samples prepared in this way were analyzed using a transmission electron microscope at magnifications of 5000× and 200,000× and voltage of 200 kV. To determine the internal stresses in the material and the dislocation density, the X-ray diffraction method was used. Analyses were performed using a universal camera, a vertical diffractometer with Bragg–Brentano’s focusing, and a graphite monochromator using Co Kα radiation (λ = 1.790 Å). Samples with dimensions 10 mm × 10 mm were analyzed after metallographic preparation by grinding, polishing, and deep etching.

The microstructure of metallographically prepared samples after etching in nital was observed using a light microscope (Leitz Ortholux, Wetzlar, Germany), and images were taken using an Olympus digital camera. The appearance and propagation of the Lüders bands were analyzed by tensile testing, up to breaking point, on a Zwick 50 kN universal tensile testing machine (Zwick, Ulm, Germany). Simultaneous measurements of the temperature change in the deformation zone were taken using a VarioCAM M82910 thermographic camera (Jenoptik, Jena, Germany) with a temperature sensitivity of 80 mK. The measured results were analyzed using Irbis professional software (InfraTec GmbH, Dresden, Germany).

Transmission electron analysis of the pre-deformed samples showed niobium precipitates (Figure 3). These precipitates were coarse, of spherical shape, and larger than 20 nanometers and were heterogeneously distributed in structure. 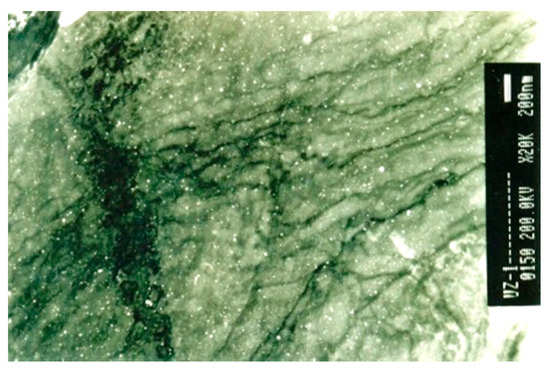 Figure 3. TEM micrograph of niobium precipitates in pre-deformation, reproduced from [2], with permission from Taylor&Francis, 2013.

In the final phase of thermomechanical treatment in both variants, the samples were examined after each pass (Figure 4a). The degree of precipitation in the HT variant was lower than that in the LT variant, and for the first three passes, they remained low and were similar for both variants (11.8–12.1%).

Figure 4. Change in precipitation degree (a) through passes and (b) with the temperature of thermomechanical processing.

In the last passes of the final thermomechanical processing in both variants, the degree of total deformation decreases (Figure 6) while dislocation density increases, as is the case with the degree of precipitation (Figure 4a). In investigations of the same steels [8] it was proven that the low temperature rolling schedule leads to considerably higher rolling forces in the last three passes. 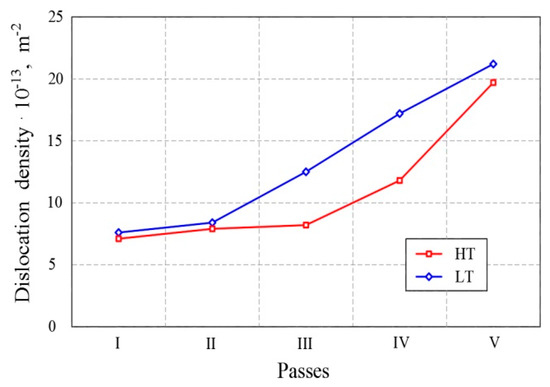 Figure 6. Change in the dislocation density by stages of final thermomechanical processing. 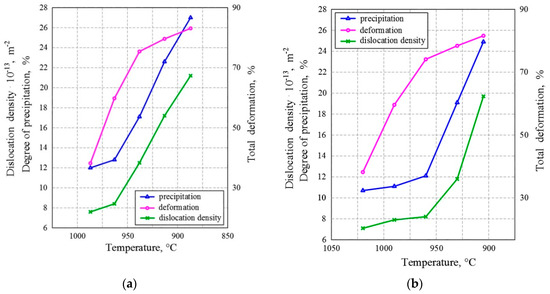 Figure 7. Relation between the degree of precipitation, the dislocation density, and temperature for (a) the LT variant and (b) the HT variant.

Figure 8. TEM micrograph of the interaction between precipitates and dislocations [9].

After the third pass, the major influence on the dislocation density was shown to be the degree of precipitation rather than the degree of deformation. Specifically, in microalloyed steels, recrystallization and precipitation can interact in at least three distinct ways [10]. Firstly, a decrease in dislocation density through recrystallization reduces the number of precipitate nucleation sites available and can thus retard the onset and rate of precipitation; this occurs after the onset of intense deformation-induced precipitation (960 °C) and is evident in the first two passes in the LT variant, as well as in the first three passes in the HT variant. Secondly, precipitate dispersion can provide a pinning (Zener) force that can retard or halt the progress of recrystallization; this is evident in the latest passes of final TMCP, because by increasing the degree of precipitation, the density of blocked dislocations also increases, as shown in Figure 7. Precipitates are arranged in rows at the onset of SIP (Figure 5), but after it, they are dispersed, accumulating in certain places and blocking the dislocations (Figure 8). Thirdly, the mobility of grain boundaries is strongly affected by the solute content of the matrix and its diffusivity. Particularly, the diffusivity of Nb is an important factor contributing to the significant retarding effect on recovery and recrystallization; it slows down boundary motion since it interacts with the boundary and does not diffuse rapidly enough to keep up with the migrating boundary. The higher degree of precipitation leads to the decrease in the amount of free Nb that can diffuse. Furthermore, as a result of the larger atomic radius of Nb than those of carbon, nitrogen, and iron, Nb moves more slowly; thus, it cannot track the grain boundary, and its diffusivity decreases. Further, the dislocation density increases even though the energy of the system and the temperature decrease, and so the total deformation slows down. Therefore, close-packed carbonitride rows and interaction between precipitates and dislocations are present in the structure (Figure 9). The further increase in deformation and precipitation also increases the density of dislocations, as was also observed in [11]. Dislocations pile up on rows of precipitates and form the boundary of the subgrain (Figure 9).

Figure 9. TEM micrograph of dislocations accumulating on the rows of precipitations.

In the last passes, the recrystallization and recovery mechanisms were halted and completely stopped. Specifically, fine precipitates pinned dislocations and thus retarded recovery. In such conditions, further deformation leads to an increase in the density of dislocations.

Before the phase transformation, there was enough solute niobium present in the steel to delay the transformation. Specifically, solute niobium delays transformation significantly, which lowers the temperature, resulting in a higher ferrite nucleation rate and lower ferrite growth rate. As the phase transformation takes place relatively slowly, there is a possibility for interphase precipitation. After slow cooling, which occurs in the air, there is a chance for spontaneous precipitation [12]. In this study, it was found that in the HT variant, precipitation of 36.5% was achieved, and in the LT variant, 34% was achieved. As a final step of TMCP, after rolling, both strips (the LT and HT variants) were cooled at the same speed. Precipitation continued, and these precipitates had a beneficial effect in preventing ferritic perlite grain growth. A fine-grained, ferrite–pearlite microstructure with almost the same grain size was achieved (Figure 10).

In both variants of TMCP, the precipitation of Nb, the interaction of precipitates, and dislocations resulted in a fine-grained, homogeneous structure. In the cooled strip, the degree of precipitation in the high temperature variant (36.5%) was higher as compared to that in the low temperature variant (34%). This indicates that the binding of niobium to precipitates (NbC, NbN, Nb(CN)) was not accomplished entirely. Free niobium may affect the appearance of Lüders bands. The dislocation density was about the same, 108 m−2. Steels of similar chemical composition but not containing Nb have a dislocation density of 106 m−2.

Figure 11. The stress–strain curve and distribution of temperature change at the beginning of the plastic material flow in the field of the appearance of Lüders bands.

Research conducted within the framework of this paper resulted in the following conclusions: