+1 point
Thank you for your contribution! You can also upload a video entry related to this topic through the link below: https://encyclopedia.pub/user/video_add?id=33152
Check Note
2000/2000
Katyusha Rocket Launcher

Edit
Upload a video
The content is sourced from: https://handwiki.org/wiki/Engineering:Katyusha_rocket_launcher

The Katyusha multiple rocket launcher (Russian: Катю́ша) is a type of rocket artillery first built and fielded by the Soviet Union in World War II. Multiple rocket launchers such as these deliver explosives to a target area more quickly than conventional artillery, but with lower accuracy and requiring a longer time to reload. They are fragile compared to artillery guns, but are inexpensive, easy to produce, and usable on any chassis. The Katyushas of World War II, the first self-propelled artillery mass-produced by the Soviet Union, were usually mounted on ordinary trucks. This mobility gave the Katyusha, and other self-propelled artillery, another advantage: being able to deliver a large blow all at once, and then move before being located and attacked with counter-battery fire. Katyusha weapons of World War II included the BM-13 launcher, light BM-8, and heavy BM-31. Today, the nickname is also applied to newer truck-mounted post-Soviet – in addition to non-Soviet – multiple rocket launchers, notably the common BM-21 Grad and its derivatives.

Initially, concerns for secrecy kept the military designation of the Katyushas from being known by the soldiers who operated them. They were called by code names such as Kostikov guns, after the head of the RNII, the Reaction-Engine Scientific Research Institute, and finally classed as Guards Mortars.[1] The name BM-13 was only allowed into secret documents in 1942, and remained classified until after the war.[2]

Because they were marked with the letter K (for Voronezh Komintern Factory),[2] Red Army troops adopted a nickname from Mikhail Isakovsky's popular wartime song, "Katyusha", about a girl longing for her absent beloved, who has gone away on military service.[3] Katyusha is the Russian equivalent of Katie, an endearing diminutive form of the name Katherine: Yekaterina →Katya →Katyusha.

German troops coined the nickname "Stalin's organ" (German: Stalinorgel), after Soviet leader Joseph Stalin , comparing the visual resemblance of the launch array to a pipe organ, and the sound of the weapon's rocket motors, a distinctive howling sound which terrified the German troops,[4] adding a psychological warfare aspect to their use. Weapons of this type are known by the same name in Denmark (Danish: Stalinorgel), Finland (Finnish: Stalinin urut), France (French: orgue de Staline), Norway (Norwegian: Stalinorgel), the Netherlands and Belgium (Dutch: Stalinorgel), Hungary (Hungarian: Sztálinorgona), Spain and other Spanish-speaking countries (Spanish: Órganos de Stalin) as well as in Sweden (Swedish: Stalinorgel).[3]

The heavy BM-31 launcher was also referred to as Andryusha (Андрюша, an affectionate diminutive of "Andrew").[5] 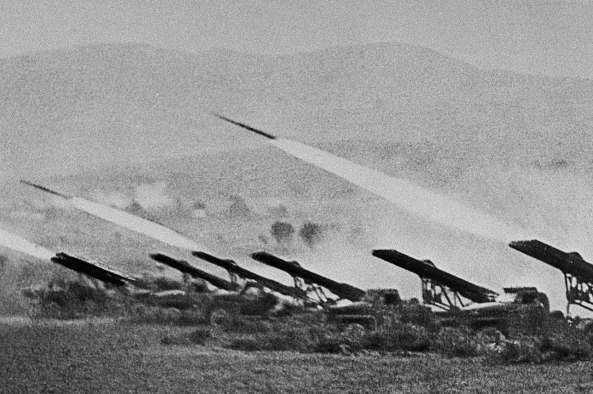 A battery of Katyusha launchers fires at German forces during the Battle of Stalingrad, 6 October 1942

Katyusha rocket launchers, which were invented in Voronezh, were mounted on many platforms during World War II, including on trucks, artillery tractors, tanks, and armoured trains, as well as on naval and riverine vessels as assault support weapons. Soviet engineers also mounted single Katyusha rockets on lengths of railway track to serve in urban combat.

The weapon is less accurate than conventional artillery guns, but is extremely effective in saturation bombardment, and was particularly feared by German soldiers. A battery of four BM-13 launchers could fire a salvo in 7–10 seconds that delivered 4.35 tons of high explosives over a 400,000-square-metre (4,300,000 sq ft) impact zone,[1] making its power roughly equivalent to that of 72 conventional artillery guns. With an efficient crew, the launchers could redeploy to a new location immediately after firing, denying the enemy the opportunity for counterbattery fire. Katyusha batteries were often massed in very large numbers to create a shock effect on enemy forces. The weapon's disadvantage was the long time it took to reload a launcher, in contrast to conventional guns which could sustain a continuous low rate of fire. 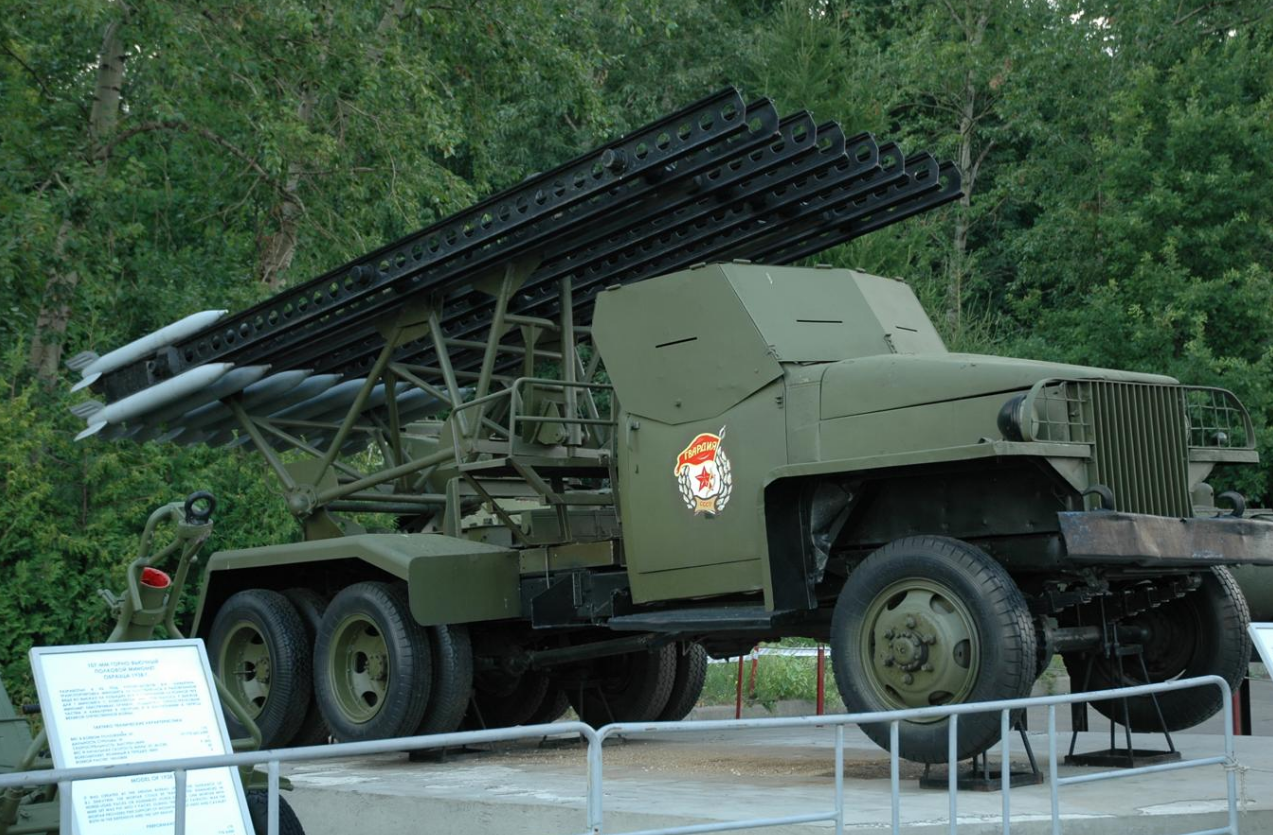 BM-13N Katyusha on a Lend-Lease Studebaker US6 truck, at the Museum of the Great Patriotic War, Moscow (2006) 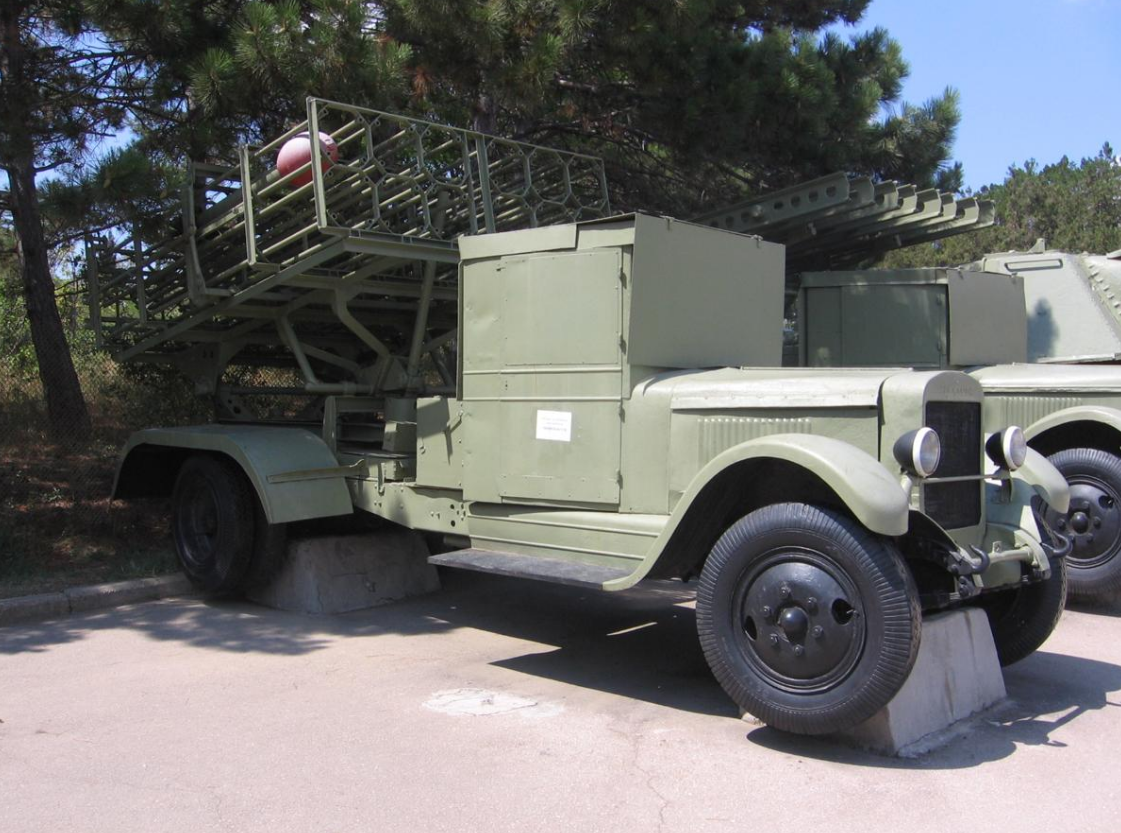 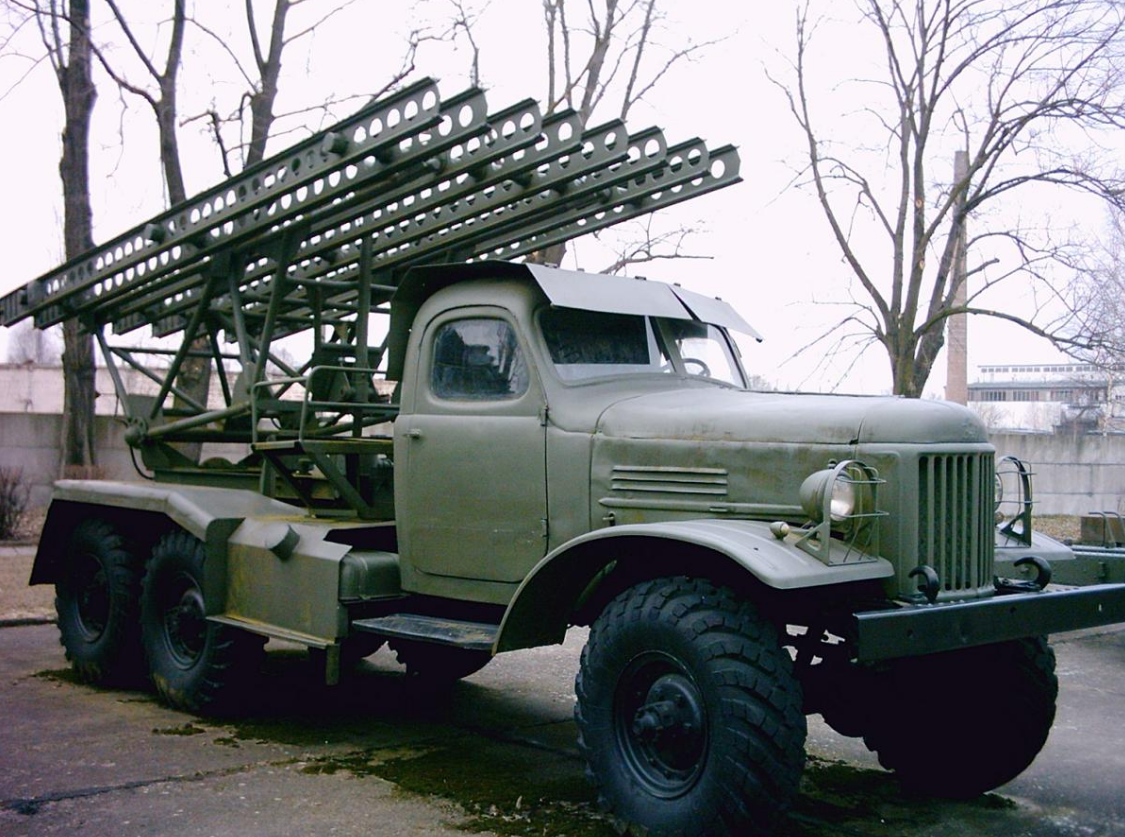 Postwar Katyusha on a ZiL-157 truck 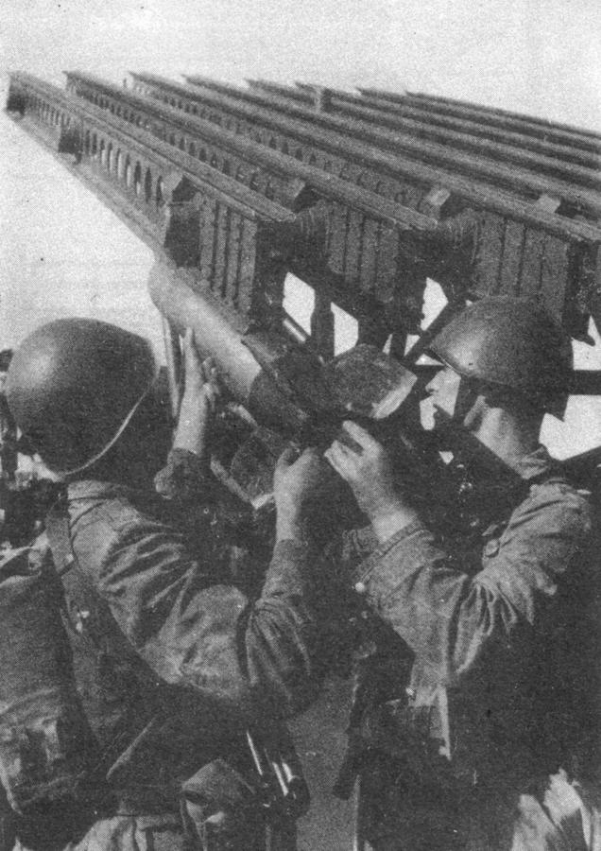 An M13 rocket for the Katyusha launcher on display in Musée de l'Armée.

The first large-scale testing of the rocket launchers took place at the end of 1938, when 233 rounds of various types were used. A salvo of rockets could completely straddle a target at a range of 5,500 metres (3.4 mi). But the artillery branch was not fond of the Katyusha, because it took up to 50 minutes to load and fire 24 rounds, while a conventional howitzer could fire 95 to 150 rounds in the same time. Testing with various rockets was conducted through 1940, and the BM-13-16 with launch rails for sixteen rockets was authorized for production. Only forty launchers were built before Germany invaded the Soviet Union in June 1941.[3]

After their success in the first month of the war, mass production was ordered and the development of other models proceeded. The Katyusha was inexpensive and could be manufactured in light industrial installations which did not have the heavy equipment to build conventional artillery gun barrels.[1] By the end of 1942, 3,237 Katyusha launchers of all types had been built, and by the end of the war total production reached about 10,000.[8]

The truck-mounted Katyushas were installed on ZiS-6 6×4 trucks, as well as the two-axle ZiS-5 and ZiS-5V. In 1941, a small number of BM-13 launchers were mounted on STZ-5 artillery tractors. A few were also tried on KV tank chassis as the KV-1K, but this was a needless waste of heavy armour. Starting in 1942, they were also mounted on various British, Canadian and U.S. Lend-Lease trucks, in which case they were sometimes referred to as BM-13S. The cross-country performance of the Studebaker US6 2½ ton truck was so good that it became the GAU's standard mounting in 1943, designated BM-13N (normalizovanniy, 'standardized'), and more than 1,800 of this model were manufactured by the end of World War II.[9] After World War II, BM-13s were based on Soviet-built ZiL-151 trucks.

Based on the M-13, the M-30 rocket was developed in 1942. Its bulbous warhead required it to be fired from a grounded frame, called the M-30 (single frame, four round; later double frame, 8 round), instead of a launch rail mounted on a truck. In 1944 it became the basis for the BM-31-12 truck-mounted launcher.[1]

A battery of BM-13-16 launchers included four firing vehicles, two reload trucks and two technical support trucks, with each firing vehicle having a crew of six. Reloading was executed in 3–4 minutes, although the standard procedure was to switch to a new position some 10 km away due to the ease with which the battery could be identified by the enemy. Three batteries were combined into a division (company), and three divisions into a separate mine-firing regiment of rocket artillery.

Soviet World War II rocket systems were named according to standard templates which are the following:

Note: There was also an experimental KV-1K – Katyusha mounted on KV-1 tank which was not taken in service.

Rockets used in the above implementations were:[13]

The M-8 and M-13 rocket could also be fitted with smoke warheads, although this was not common.

The multiple rocket launchers were top secret in the beginning of World War II. A special unit of the NKVD troops was raised to operate them.[1] On July 14, 1941, an experimental artillery battery of seven launchers was first used in battle at Orsha in Vitebsk Province of Belarus, under the command of Captain Ivan Flyorov, destroying a concentration of German troops with tanks, armored vehicles and trucks at the marketplace, causing massive German Army casualties and its retreat from the town in panic. Following the success, the Red Army organized new Guards mortar batteries for the support of infantry divisions. A battery's complement was standardized at four launchers. They remained under NKVD control until German Nebelwerfer rocket launchers became common later in the war.[8]

On August 8, 1941, Stalin ordered the formation of eight special Guards mortar regiments under the direct control of the Reserve of the Supreme High Command (RVGK). Each regiment comprised three battalions of three batteries, totalling 36 BM-13 or BM-8 launchers. Independent Guards mortar battalions were also formed, comprising 12 launchers in three batteries of four. By the end of 1941, there were eight regiments, 35 independent battalions, and two independent batteries in service, fielding a total of 554 launchers.[15] 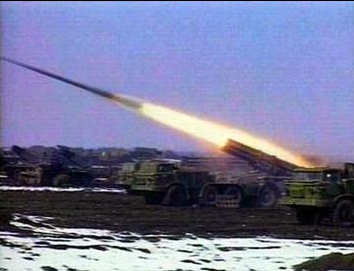 The success and economy of multiple rocket launchers (MRL) have led them to continue to be developed. During the Cold War, the Soviet Union fielded several models of Katyusha-like MRL, notably the BM-21 launchers somewhat inspired by the earlier weapon, and the larger BM-27. Advances in artillery munitions have been applied to some Katyusha-type multiple launch rocket systems, including bomblet submunitions, remotely deployed land mines, and chemical warheads.

With the breakup of the Soviet Union, Russia inherited most of its military arsenal including its large complement of MRLs. In recent history, they have been used by Russian forces during the First and Second Chechen Wars and by Armenian and Azerbaijani forces during the Nagorno-Karabakh War. Georgian government forces are reported to have used BM-21 or similar rocket artillery in fighting in the 2008 South Ossetia war.[17]

Proper Katyushas (BM-13s) also saw action in the Korean War, used by the Chinese People's Volunteer Army against the South and United Nations forces. Soviet BM-13s were known to have been imported to China before the Sino-Soviet split and were operational in the People's Liberation Army.

Israel captured BM-24 MRLs during the Six-Day War (1967), used them in two battalions during the Yom Kippur War (1973) and the 1982 Lebanon War, and later developed the MAR-240 launcher for the same rockets, based on a Sherman tank chassis.

During the 2006 Lebanon War, Hezbollah fired between 3,970 and 4,228 rockets, from light truck-mounts and single-rail man-portable launchers. About 95% of these were 122 mm (4.8 in) Syrian-manufactured M-21OF type artillery rockets which carried warheads up to 30 kg (66 lb) and had a range of 20 km, perhaps up to 30 km (19 mi).[19][19][20][21][22] Hamas has launched 122-mm Grad-type Katyusha rockets from the Gaza Strip against several cities in Israel,[23] although they are not reported to have truck-mounted launchers. Although Katyusha originally referred to the mobile launcher, today the rockets are often referred to as Katyushas.

Some allege that the CIA bought Katyushas from the Egyptian military and supplied them to the Mujahideen (via Pakistan's ISI) during the Soviet Afghan war.[24]

Katyusha-like MRLs were also allegedly used by the Rwandan Patriotic Front during its 1990 invasion of Rwanda, through the 1994 genocide. They were effective in battle, but translated into much anti-Tutsi sentiment in the local media.[25]

It was reported that BM-21 launchers were used against American forces during the 2003 invasion of Iraq. They have also been used in the Afghanistan and Iraq insurgencies. In Iraq, according to Associated Press and Agence France-Presse reports, Katyusha-like rockets were fired at the Green Zone late March 2008.[26][27]

Katyusha rockets were reportedly used by both Gaddafi Loyalists and anti-Gaddafi forces during the Libyan Civil War.[28]

Also, several countries have continued to build and operate Katyusha-like systems well into the 21st century, as for example the Teruel MRL of the Spanish Army.

In February 2013, the Defence Ministry of Yemen reported seizing an Iranian ship, and that the ship's cargo included (among its other weapons) Katyusha rockets.[29]

In August 2013 the Irish republican dissident group Óglaigh na hÉireann was blamed for planting a Katyusha-style rocket in undergrowth next to a field near Cullyhanna in South Armagh in an area used by soldiers on training exercises. The weapon was to be triggered using a mobile phone.

More
©Text is available under the terms and conditions of the Creative Commons-Attribution ShareAlike (CC BY-SA) license; additional terms may apply. By using this site, you agree to the Terms and Conditions and Privacy Policy.
Upload a video for this entry
Information
Subjects: Engineering, Aerospace
Contributor MDPI registered users' name will be linked to their SciProfiles pages. To register with us, please refer to https://encyclopedia.pub/register :
HandWiki
View Times: 229
Entry Collection: HandWiki
Revision: 1 time (View History)
Update Time: 07 Nov 2022
Table of Contents
1000/1000
Hot Most Recent