+1 point
Thank you for your contribution! You can also upload a video entry related to this topic through the link below: https://encyclopedia.pub/user/video_add?id=33054
Check Note
2000/2000
Social Security

Edit
Upload a video
The content is sourced from: https://handwiki.org/wiki/Social:Social_security

Social security is "any government system that provides monetary assistance to people with an inadequate or no income". In the United States, this is usually called welfare or a social safety net, especially when talking about Canada and European countries. Social security is asserted in Article 22 of the Universal Declaration of Human Rights, which states: In simple terms, the signatories agree that the society in which a person lives should help them to develop and to make the most of all the advantages (culture, work, social welfare) which are offered to them in the country. Social security may also refer to the action programs of an organization intended to promote the welfare of the population through assistance measures guaranteeing access to sufficient resources for food and shelter and to promote health and well-being for the population at large and potentially vulnerable segments such as children, the elderly, the sick and the unemployed. Services providing social security are often called social services. Terminology in this area is somewhat different in the United States from in the rest of the English-speaking world. The general term for an action program in support of the well being of poor people in the United States is welfare program, and the general term for all such programs is simply welfare. In American society, the term welfare arguably has negative connotations. In the United States, the term Social Security refers to the US social insurance program for all retired and disabled people. Elsewhere the term is used in a much broader sense, referring to the economic security society offers when people are faced with certain risks. In its 1952 Social Security (Minimum Standards) Convention (nr. 102), the International Labour Organization (ILO) defined the traditional contingencies covered by social security as including: People who cannot reach a guaranteed social minimum for other reasons may be eligible for social assistance (or welfare, in American English). Modern authors often consider the ILO approach too narrow. In their view, social security is not limited to the provision of cash transfers, but also aims at security of work, health, and social participation; and new social risks (single parenthood, the reconciliation of work and family life) should be included in the list as well. Social security may refer to: A report published by the ILO in 2014 estimated that only 27% of the world's population has access to comprehensive social security.

In the Roman Empire, the Emperor Trajan (reigned A.D. 98–117) distributed gifts of money and free grain to the poor in the city of Rome, and returned the gifts of gold sent to him upon his accession by cities in Italy and the provinces of the Empire.[2] Trajan's program brought acclaim from many, including Pliny the Younger.[3]

In Jewish tradition, charity (represented by tzedakah) is a matter of religious obligation rather than benevolence. Contemporary charity is regarded as a continuation of the Biblical Maaser Ani, or poor-tithe, as well as Biblical practices, such as permitting the poor to glean the corners of a field and harvest during the Shmita (Sabbatical year). Voluntary charity, along with prayer and repentance, is befriended to ameliorate the consequences of bad acts. 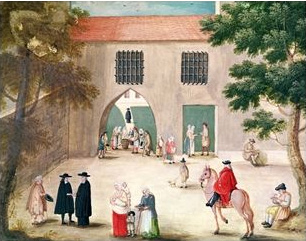 According to economist Robert Henry Nelson, "The medieval Roman Catholic Church operated a far-reaching and comprehensive welfare system for the poor..."[5][6]

The concepts of welfare and pension were put into practice in the early Islamic law[7] of the Caliphate as forms of Zakat (charity), one of the Five Pillars of Islam, since the time of the Rashidun caliph Umar in the 7th century. The taxes (including Zakat and Jizya) collected in the treasury of an Islamic government were used to provide income for the needy, including the poor, elderly, orphans, widowed persons, and the disabled. According to the Islamic jurist Al-Ghazali (Algazel, 1058–1111), the government was also expected to store up food supplies in every region in case a disaster or famine occurred.[7][8] (See Bayt al-mal for further information.)

There is relatively little statistical data on transfer payments before the High Middle Ages. In the medieval period and until the Industrial Revolution, the function of welfare payments in Europe was principally achieved through private giving or charity. In those early times, there was a much broader group considered to be in poverty as compared to the 21st century.

Early welfare programs in Europe included the England Poor Law of 1601, which gave parishes the responsibility for providing poverty relief assistance to the poor.[9] This system was substantially modified by the 19th-century Poor Law Amendment Act, which introduced the system of workhouses.

It was predominantly in the late 19th and early 20th centuries that an organized system of state welfare provision was introduced in many countries. Otto von Bismarck, Chancellor of Germany, introduced one of the first welfare systems for the working classes in 1883. In Great Britain the Liberal government of Henry Campbell-Bannerman and David Lloyd George introduced the National Insurance system in 1911,[10] a system later expanded by Clement Attlee. The United States did not have an organized welfare system until the Great Depression, when emergency relief measures were introduced under President Franklin D. Roosevelt. Even then, Roosevelt's New Deal focused predominantly on a program of providing work and stimulating the economy through public spending on projects, rather than on cash payment.

This policy is usually applied through various programs designed to provide a population with income at times when they are unable to care for themselves. Income maintenance is based in a combination of five main types of program:

Social protection refers to a set of benefits available (or not available) from the state, market, civil society and households, or through a combination of these agencies, to the individual/households to reduce multi-dimensional deprivation. This multi-dimensional deprivation could be affecting less active poor persons (such as the elderly or the disabled) and active poor persons (such as the unemployed).

This broad framework makes this concept more acceptable in developing countries than the concept of social security. Social security is more applicable in the conditions, where large numbers of citizens depend on the formal economy for their livelihood. Through a defined contribution, this social security may be managed.

But, in the context of widespread informal economy, formal social security arrangements are almost absent for the vast majority of the working population. Besides, in developing countries, the state's capacity to reach the vast majority of the poor people may be limited because of its limited infrastructure and resources. In such a context, multiple agencies that could provide for social protection, including health care, is critical for policy consideration.[11] The framework of social protection is thus holds the state responsible for providing for the poorest populations by regulating non-state agencies.

Collaborative research from the Institute of Development Studies debating Social Protection from a global perspective, suggests that advocates for social protection fall into two broad categories: "instrumentalists" and "activists". Instrumentalists argue that extreme poverty, inequality, and vulnerability is dysfunctional in the achievement of development targets (such as the MDGs). In this view, social protection is about putting in place risk management mechanisms that will compensate for incomplete or missing insurance (and other) markets, until a time that private insurance can play a more prominent role in that society. Activist arguments view the persistence of extreme poverty, inequality, and vulnerability as symptoms of social injustice and structural inequality and see social protection as a right of citizenship. Targeted welfare is a necessary step between humanitarianism and the ideal of a "guaranteed minimum income" where entitlement extends beyond cash or food transfers and is based on citizenship, not philanthropy.[12]

More
©Text is available under the terms and conditions of the Creative Commons-Attribution ShareAlike (CC BY-SA) license; additional terms may apply. By using this site, you agree to the Terms and Conditions and Privacy Policy.
Upload a video for this entry
Information
Subjects: Economics
Contributor MDPI registered users' name will be linked to their SciProfiles pages. To register with us, please refer to https://encyclopedia.pub/register :
HandWiki
View Times: 21
Entry Collection: HandWiki
Revision: 1 time (View History)
Update Time: 04 Nov 2022
Table of Contents
1000/1000
Hot Most Recent