+1 point
Thank you for your contribution! You can also upload a video entry related to this topic through the link below: https://encyclopedia.pub/user/video_add?id=33042
Check Note
2000/2000
Overview of 21st-Century Propaganda

Edit
Upload a video
The content is sourced from: https://handwiki.org/wiki/Social:Overview_of_21st-century_propaganda

Since the end of the 20th century, propaganda has evolved significantly. Today's propaganda is characterised by psych-ops and disinformation, whereas a few decades ago it was dominated by posters and simple films.

In the 2001 invasion of Afghanistan, psychological operations tactics were employed to demoralise the Taliban and to win the sympathies of the Afghan population. At least six EC-130E Commando Solo aircraft were used to jam local radio transmissions and transmit replacement propaganda messages. Leaflets were also dropped throughout Afghanistan, offering rewards for Osama bin Laden and other individuals, portraying Americans as friends of Afghanistan and emphasising various negative aspects of the Taliban. Another shows a picture of Mohammed Omar in a set of crosshairs with the words: "We are watching."

Both the United States and Iraq employed propaganda during the Iraq War. The United States established campaigns towards the American people on the justifications of the war while using similar tactics to bring down Saddam Hussein's government in Iraq.[1]

The Iraqi insurgency's plan was to gain as much support as possible by using violence as their propaganda tool.[2] Inspired by the Vietcong's tactics,[3] insurgents were using rapid movement to keep the coalition off-balance.[2] By using low-technology strategies to convey their messages, they were able to gain support.[4] Graffiti slogans were used on walls and houses praising the virtues of many group leaders while condemning the Iraqi government. Others used flyers, leaflets, articles and self-published newspapers and magazines to get the point across.[4]

Insurgents also produced CDs and DVDs and distributed them in communities that the Iraq and the US Government were trying to influence.[5] The insurgents designed advertisements that cost a fraction of what the US was spending on their ads aimed at the same people in Iraq with much more success.[5] In addition, a domestic Arabic language television station was established with the aim of informing the Iraqi public of alleged coalition propaganda efforts in the country.[3]

US propaganda in Iraq

To achieve their aim of a moderate, pro-western Iraq, US authorities were careful to avoid conflicts with Islamic culture that would produce passionate reactions from Iraqis, but differentiating between "good" and "bad" Islam has proved challenging for the US.[3]

The US implemented black propaganda by creating false radio personalities that would disseminate pro-American information, but supposedly run by the supporters of Saddam Hussein. One radio station used was Radio Tikrit.[3] Another example of use of black propaganda is that the United States paid Iraqis to publish articles written by US troops in their newspapers under the idea that they are unbiased and real accounts; this was brought forth by The New York Times in 2005.[6] The article stated that it was the Lincoln Group who had been hired by the US government to create the propaganda. However, their names were later cleared from any wrongdoing.[6]

The US was more successful with the Voice of America campaign, which is an old Cold War tactic that exploited people's desire for information.[3] While the information they gave out to the Iraqis was truthful, they were in a high degree of competition with the opposing forces after the censorship of the Iraqi media was lifted with the removal of Saddam from power.[7]

In November 2005, the Chicago Tribune and the Los Angeles Times alleged that the United States military had manipulated news reported in Iraqi media in an effort to cast a favourable light on its actions while demoralising the insurgency. Lt. Col. Barry Johnson, a military spokesman in Iraq, said the program is "an important part of countering misinformation in the news by insurgents", while a spokesman for former Defense Secretary Donald H. Rumsfeld said the allegations of manipulation were troubling if true. The Department of Defense confirmed the existence of the program.[8][9]

Propaganda aimed at US citizens

The extent to which the US government used propaganda aimed at its own people is a matter of discussion. The book Selling Intervention & War, by Jon Western, argued that president Bush was "selling the war" to the public.[10]

President George W. Bush gave a talk at the Athena Performing Arts Centre, at Greece Athena Middle and High School, Tuesday, May 24, 2005, in Rochester, New York. About halfway through the event, Bush said: "See, in my line of work, you got to keep repeating things over and over, and over again, for the truth to sink in, to kind of catapult the propaganda."

People had their initial reactions to the War on Terror. While the United States' official stance was to remove Saddam Hussein's power in Iraq with allegations that his government held weapons of mass destruction or was related to Osama Bin Laden,[11] over time the Iraq war as a whole has been seen in a negative light.[12] Video and picture coverage in the news has shown images of torture and other PR disasters being done under the Iraqi Government.[11] 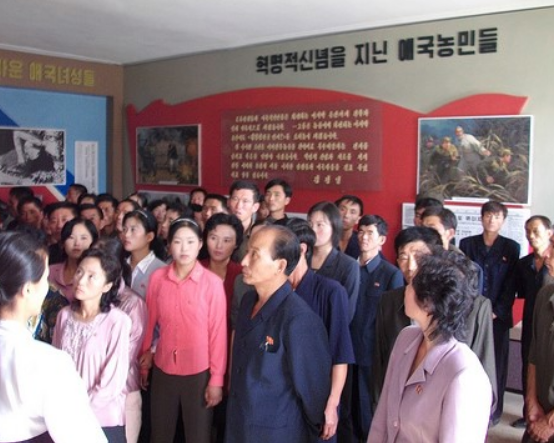 Every year, a state-owned publishing house releases several cartoons (called geurim-chaek in North Korea), many of which are smuggled across the Chinese border and, sometimes, end up in university libraries in the United States. The books are designed to instill the Juche philosophy of Kim Il-sung (the "father" of North Korea)—radical self-reliance of the state. The plots mostly feature scheming capitalists from the United States and Japan who create dilemmas for naïve North Korean characters.

DPRK textbooks claim that US missionaries came to the Korean Peninsula and committed barbarous acts against Korean children, including injecting dangerous liquids into the children and writing the word "THIEF" on the forehead of any child who stole an apple for missionary-owned orchards in Korea.[13]

Drug cartels have been engaged in propaganda and psychological campaigns to influence their rivals and those within their area of influence. They use banners and narcomantas to threaten their rivals. Some cartels hand out pamphlets and leaflets to conduct public relation campaigns. They have been able to control the information environment by threatening journalists, bloggers and others who speak out against them. They have elaborate recruitment strategies targeting young adults to join their cartel groups. They have successfully branded the word narco, and the word has become part of Mexican culture. There is music, television shows, literature, beverages, food and architecture that all have been branded narco.[14][15]

The Shared values initiative was a public relations campaign that was intended to sell a "new" America to Muslims around the world by showing that American Muslims were living happily and freely, without persecution, in post-9/11 America.[16] Funded by the United States Department of State, the campaign created a public relations front group known as Council of American Muslims for Understanding (CAMU). The campaign was divided in phases; the first of which consisted of five mini-documentaries for television, radio, and print with shared values messages for key Muslim countries.[17] 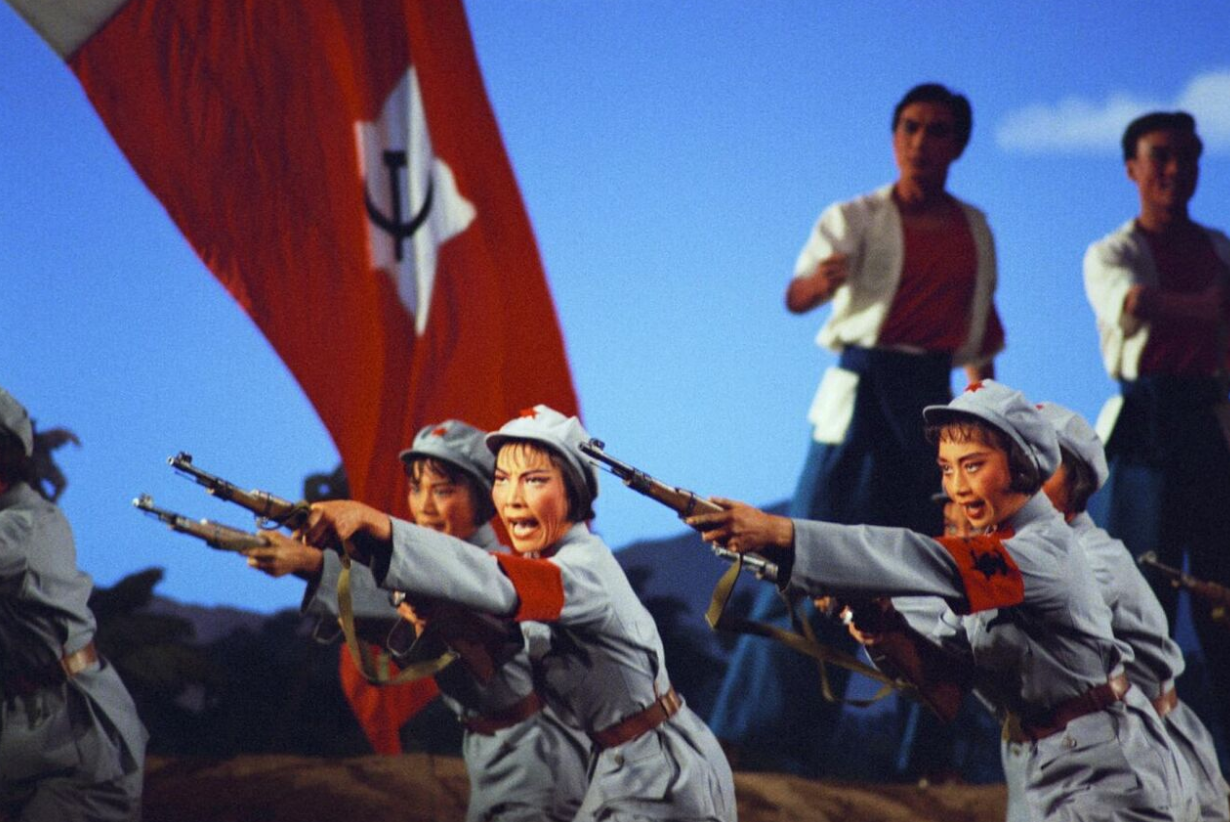 Revolutionary opera with a scene from the Red Detachment of Women. https://handwiki.org/wiki/index.php?curid=1116695

Propaganda is used by the Communist Party of China to sway public and international opinion in favour of its policies.[18][19] Domestically, this includes censorship of proscribed views and an active cultivation of views that favour the government. Propaganda is considered central to the operation of the Chinese government.[20] The term in general use in China, xuanchuan (宣傳 "propaganda; publicity") can have either a neutral connotation in official government contexts or a pejorative connotation in informal contexts.[21] Some xuanchuan collocations usually refer to "propaganda" (e.g., xuānchuánzhàn 宣传战 "propaganda war"), others to "publicity" (xuānchuán méijiè 宣傳媒介 "mass media; means of publicity"), and still others are ambiguous (xuānchuányuán 宣传员 "propagandist; publicist").[22]

Aspects of propaganda can be traced back to the earliest periods of Chinese history, but propaganda has been most effective in the twentieth century owing to mass media and an authoritarian government.[20] China in the era of Mao Zedong is known for its constant use of mass campaigns to legitimise the state and the policies of leaders. It was the first Chinese government to successfully make use of modern mass propaganda techniques, adapting them to the needs of a country which had a largely rural and illiterate population.[20] In poor developing countries, China spreads propaganda through methods such as opening Confucius Institutes, and providing training programs in China for foreign officials and students.[23] 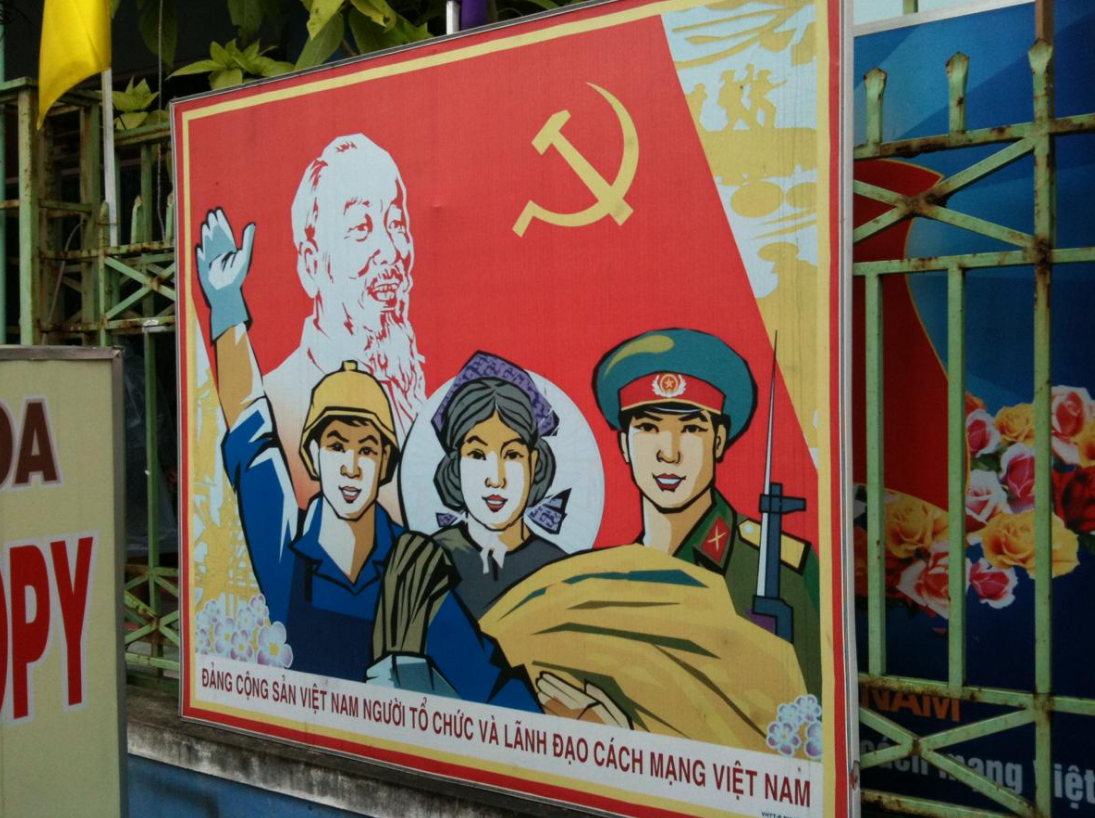 Propaganda posters in Vietnam with images of solidarity and Ho Chi Minh. https://handwiki.org/wiki/index.php?curid=1110027

Posters hanging everywhere often describe unity of the working class, farmers and soldiers under the leadership of the Communist Party of Vietnam and Ho Chi Minh. Residents and students have been studying ethics and ideology of Ho Chi Minh.

More
©Text is available under the terms and conditions of the Creative Commons-Attribution ShareAlike (CC BY-SA) license; additional terms may apply. By using this site, you agree to the Terms and Conditions and Privacy Policy.
Upload a video for this entry
Information
Subjects: Others
Contributor MDPI registered users' name will be linked to their SciProfiles pages. To register with us, please refer to https://encyclopedia.pub/register :
HandWiki
View Times: 108
Entry Collection: HandWiki
Revision: 1 time (View History)
Update Time: 08 Nov 2022
Table of Contents
1000/1000
Hot Most Recent