+1 point
Thank you for your contribution! You can also upload a video entry related to this topic through the link below: https://encyclopedia.pub/user/video_add?id=32642
Check Note
2000/2000
The Quest of the Historical Jesus

Edit
Upload a video
The content is sourced from: https://handwiki.org/wiki/Religion:The_Quest_of_the_Historical_Jesus

The Quest of the Historical Jesus (German: Geschichte der Leben-Jesu-Forschung, literally "History of Life-of-Jesus Research") is a 1906 work of Biblical historical criticism written by Albert Schweitzer during the previous year, before he began to study for a medical degree. The original edition was translated into English by William Montgomery and published in 1910. An expanded second German edition was published during 1913, containing theologically significant revisions and expansions. This expanded edition was not published in English until 2001.

In The Quest, Schweitzer reviews all prior work on the question of the "historical Jesus" starting with the late 18th century. He points out how Jesus' image has changed with the times and with the personal proclivities of the various authors. He concludes with his own synopsis and interpretation of what had been learned over the course of the previous century. He takes the position that the life and thinking of Jesus must be interpreted in the light of Jesus' own convictions, which he characterizes as those of "late Jewish eschatology", and that Jesus defies any attempt at understanding him by making parallels to the ways of thinking or feeling of modern men. In Schweitzer's view, Jesus genuinely believed that his ministry would bring about the end of history and did not see any prolonged period elapsing between his time on earth and God's final judgment.

The 1913 second edition of Quest included a rebuttal to the "mythicists" of his day, i.e. those scholars who maintain that no historical Jesus ever existed.[1]

1.1. The Position of the Subject at the Close of The Nineteenth Century

Schweitzer wrote that Jesus and his followers expected the imminent end of the world.[3][4] He became very focused on the study and cross referencing of the many Biblical verses promising the return of the Son of Man and the exact details of this urgent event, as it was originally believed that it would unfold. He noted that in the gospel of Mark, Jesus speaks of a "tribulation," with nation rising against nation, false prophets, earthquakes, stars falling from the sky, and the coming of the Son of Man "in the clouds with great power and glory." Jesus even tells his disciples when all this will happen: "Verily I say unto you, that this generation shall not pass, till all these things be done." (Mark 13:30) The same story is told in the gospel of Matthew, with Jesus promising his rapid return as the Son of Man, and again saying: "Verily I say unto you, this generation shall not pass, till all these things be fulfilled." Even St. Paul believed these things, Schweitzer observes (e.g. 1 Thessalonians 4), and Schweitzer concludes that Christians of the first century theology literally believed in the imminent fulfillment of Jesus' promise.

Schweitzer writes that the many modern versions of Christianity deliberately ignore the urgency of the message that Jesus proclaimed. Each new generation hopes to be the one to see the world destroyed, another world coming, and the saints governing a new earth. Schweitzer thus concludes that the First Century theology, originating in the lifetimes of those who first followed Jesus, is both incompatible and very different from those beliefs later made official by the Roman Emperor Constantine in AD 325.

Schweitzer established his reputation further as a New Testament scholar with other theological studies including The Psychiatric Study of Jesus (1911) and his two studies of the apostle Paul, Paul and his Interpreters, and the more complete The Mysticism of Paul the Apostle (1930). This examined the eschatological beliefs of Paul and (through this) the message of the New Testament. 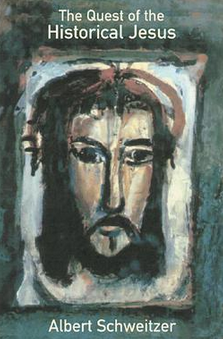 Albert Schweitzer, The Quest of the Historical Jesus, First translation of the 1913 2nd ed. (2001)

The Christ Myth was first published in 1909 by Arthur Drews on the Christ myth theory and the denial of the existence of a historical Jesus. To discuss Drews's thesis, Schweitzer added two new chapters in the 1913 second edition of his work, The Quest of the Historical Jesus. (Geschichte der Leben-Jesu-Forschung, 2. Auflage, 1913)[5][6]

An examination of the claims for and against the historicity of Jesus thus reveals that the difficulties faced by those undertaking to prove that he is not historical, in the fields both of the history of religion and the history of doctrine, and not least in the interpretation of the earliest tradition are far more numerous and profound than those which face their opponents. Seen in their totality, they must be considered as having no possible solution. Added to this, all hypotheses which have so far been put forward to the effect that Jesus never lived are in the strangest opposition to each other, both in their method of working and their interpretation of the Gospel reports, and thus merely cancel each other out. Hence we must conclude that the supposition that Jesus did exist is exceedingly likely, whereas its converse is exceedingly unlikely. This does not mean that the latter will not be proposed again from time to time, just as the romantic view of the life of Jesus is also destined for immortality. It is even able to dress itself up with certain scholarly technique, and with a little skillful manipulation can have much influence on the mass of people. But as soon as it does more than engage in noisy polemics with 'theology' and hazards an attempt to produce real evidence, it immediately reveals itself to be an implausible hypothesis. (pp. 435–436)

"While Frazer did not doubt that Jesus had lived, or claim that Christians had invented the Jesus myth, his work became a source book of ideas and data for many who did. In fact, Schweitzer included Frazer in a list of scholars who 'contested the historical existence of Jesus'"[9] Similarly, John M. Robertson's position was clarified as being "The myth theory is not concerned to deny such a possibility [that Jesus existed as a human being]. What the myth theory denies is that Christianity can be traced to a personal founder who taught as reported in the Gospels and was put to death in the circumstances there recorded"[10]

This book established Schweitzer's reputation. Its publication effectively stopped for decades work on the Historical Jesus as a sub-discipline of New Testament studies. This work resumed however with the development of the so-called "Second Quest", among whose notable exponents was Rudolf Bultmann's student Ernst Käsemann.[11] Richard Webster writes that the messianic fantasies associated with the story of the crucifixion in the Gospels are perhaps still best understood by way of The Quest of the Historical Jesus.[12]

More
©Text is available under the terms and conditions of the Creative Commons-Attribution ShareAlike (CC BY-SA) license; additional terms may apply. By using this site, you agree to the Terms and Conditions and Privacy Policy.
Upload a video for this entry
Information
Subjects: Religion
Contributor MDPI registered users' name will be linked to their SciProfiles pages. To register with us, please refer to https://encyclopedia.pub/register :
HandWiki
View Times: 28
Entry Collection: HandWiki
Revision: 1 time (View History)
Update Time: 03 Nov 2022
Table of Contents
1000/1000
Hot Most Recent