Submitted Successfully!
Thank you for your contribution! You can also upload a video entry related to this topic through the link below:
https://encyclopedia.pub/user/video_add?id=3243
Check Note
2000/2000
Tackling Chronic Inflammation with Withaferin
Edit
Upload a video
This entry is adapted from 10.3390/antiox9111107

Chronic inflammatory diseases are considered to be one of the biggest threats to human health. Most prescribed pharmaceutical drugs aiming to treat these diseases are characterized by side-effects and negatively affect therapy adherence. Finding alternative treatment strategies to tackle chronic inflammation has therefore been gaining interest over the last few decades. In this context, Withaferin A (WA), a natural bioactive compound isolated from Withania somnifera, has been identified as a promising anti-cancer and anti-inflammatory compound. Although the majority of studies focus on the molecular mechanisms of WA in cancer models, recent evidence demonstrates that WA also holds promise as a new phytotherapeutic agent against chronic inflammatory diseases. By targeting crucial inflammatory pathways, including NF-kB and Nrf2 signaling, WA suppresses the inflammatory disease state in several in vitro and preclinical in vivo models of diabetes, obesity, neurodegenerative disorders, cystic fibrosis, and osteoarthritis. This review provides a concise overview of the molecular mechanisms by which WA orchestrates its anti-inflammatory effects to restore immune homeostasis.

Inflammation is a complex biological response to harmful triggers such as infection, tissue injury or tissue stress [1]. In healthy individuals, this inflammatory defense is tightly controlled by a plethora of inhibitory feedback mechanisms orchestrated by immune cells in order to minimize exacerbated tissue damage [2][3][4][5][6][7]. However, when the inflammatory stimulus is persistent, a chronic immune response can be prompted, leading to a prolonged increase of pro-inflammatory mediators [8]. Depending on the duration and severity of the chronic inflammation, irreversible tissue damage and/or fibrogenesis might be initiated, leading to a variety of chronic diseases including cardiovascular diseases, diabetes type 2, rheumatoid arthritis, degenerative brain diseases and cancer [9][10][11][12][13][14][15].

As the World Health Organization (WHO) ranks chronic non-communicable diseases as one of the major threats to human health [16], researchers are focusing on finding effective treatment and prevention strategies to cure chronic inflammation and its consequences. Currently, the most prescribed pharmacological drugs to treat chronic diseases include metformin, statins, non-steroidal anti-inflammatory drugs (NSAIDs) and corticosteroids [17][18]. Although these compounds have proven their efficacy in the clinical setting, most of them are characterized by side-effects which negatively affect treatment adherence [19]. Frequently reported adverse effects of corticosteroids, for example, include osteoporosis, adrenal suppression, hyperglycemia, dyslipidemia, Cushing’s syndrome, psychiatric disturbances and immunosuppression [20]. Thus, in order to improve patient quality of life using these commonly prescribed drugs, there is a growing interest in finding alternative or supplemental treatment strategies to restore immune homeostasis.

Knowing that many Food and Drug Administration (FDA)-approved drugs are natural products and derivatives, the extensive arsenal of plant compounds is currently being explored and exploited for the treatment of chronic diseases [21][22][23][24]. Used for millennia in traditional ethnomedicine, herbal treatments are a promising alternative to existing therapies, with lower rates of adverse events and efficiency frequently comparable to that of conventional drugs. In an attempt to identify novel anti-inflammatory agents which are safe and effective, a “reverse pharmacology” or “bed to bench-side” approach is applied by bioactivity-guided fractionation of plants which have been used for centuries to reduce inflammatory symptoms [25]. Bioactive phytochemicals from ginger (Zingiber officinale) or turmeric (Curcuma longa), for example, have already shown therapeutic efficacy in patients suffering from inflammatory conditions such as osteoarthritis [26][27]. The main bioactive constituent of the Corida verbenacea plant has even been commercialized into the anti-inflammatory phytotherapeutic agent Acheflan® and is used as a topical cream to treat local inflammation [28]. Another popular traditional ethnomedicinal herb displaying several anti-inflammatory properties is Withania somnifera, also known as Ashwagandha or Indian Winter Cherry. Roots and berries from this plant have been used for over 3000 years in Ayurvedic medicine and are described to remedy chronic fatigue, dehydration, rheumatism an ulcers [29].

2. Withaferin A: The Major Bioactive Constituent Isolated from Withania somnifera

Withania somnifera comprises over 35 chemical constituents of which the alkaloids, flavonoids, steroidal lactones and saponins are biologically active [30]. However, the most potent bioactive compound isolated from Withania somnifera roots is the highly oxygenated lactone Withaferin A (WA). Indeed, studies show that most beneficial health effects of Withania somnifera, ranging from anti-inflammatory to anti-cancer effects, can be attributed to WA [31][32][33][34]. These effects are mostly accomplished via the covalent binding of WA with target proteins, resulting in a loss of activity of the latter [29]. Three sites in particular, namely the unsaturated A-ring at C3, the epoxide structure at position 5 and C24 in its E-ring, are especially prone to nucleophilic attacks and are often involved in Michael addition alkylation reactions [29] (Figure 1). 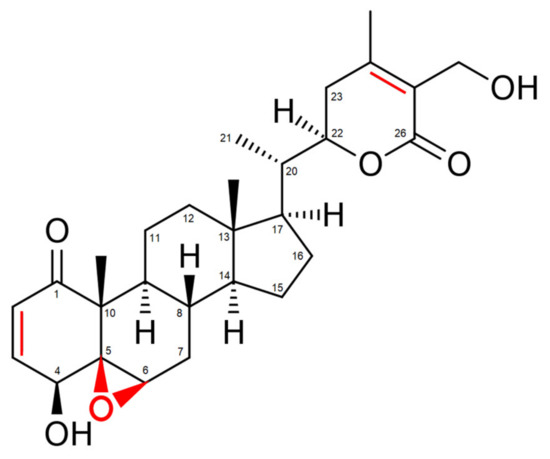 Figure 1. Structure of Withaferin A (WA). Regions prone to nucleophilic attacks are marked in red.

Since its discovery in the late 1960s, WA has been extensively studied for its anti-cancer and anti-inflammatory effects. Although the majority of research focusses on the anti-cancer properties of WA (reviewed in References [35][36]), this review summarizes its therapeutic potential in chronic inflammatory diseases. The molecular pathways targeted by WA treatment in chronic inflammation are highly similar to those affected in cancer models, albeit the downstream effects on protein expression or activation sometimes differ depending on concentration and cell type context. By interacting with the NF-κB pathway, PK, heat shock proteins, Nrf2 signaling and inflammasome activation, WA decreases the inflammatory response in various in vitro and in vivo models. The therapeutic use of WA in a pre-clinical setting, however, has not yet been thoroughly investigated. Future research in humans is necessary to investigate whether the pharmacological and toxicological properties of WA allow for its implementation as an anti-inflammatory drug.

More
© Text is available under the terms and conditions of the Creative Commons Attribution (CC BY) license; additional terms may apply. By using this site, you agree to the Terms and Conditions and Privacy Policy.
Upload a video for this entry
Information
Subjects: Biochemistry & Molecular Biology
Contributor MDPI registered users' name will be linked to their SciProfiles pages. To register with us, please refer to https://encyclopedia.pub/register :
Emilie Logie
View Times: 252
Revisions: 2 times (View History)
Update Time: 10 Aug 2021
Table of Contents
1000/1000
Hot Most Recent