+1 point
Thank you for your contribution! You can also upload a video entry related to this topic through the link below: https://encyclopedia.pub/user/video_add?id=32390
Check Note
2000/2000
Porridge

Edit
Upload a video
The content is sourced from: https://handwiki.org/wiki/Biology:Porridge

Porridge (historically also spelled porage, porrige, or parritch) is a food commonly eaten as a breakfast cereal dish, made by boiling ground, crushed or chopped starchy plants—typically grain—in water or milk. It is often cooked or served with added flavorings such as sugar, honey, (dried) fruit or syrup to make a sweet cereal, or it can be mixed with spices or vegetables to make a savoury dish. It is usually served hot in a bowl, depending on its consistency. Oat porridge, or oatmeal, is one of the most common types of porridge. Gruel is a thinner version of porridge. 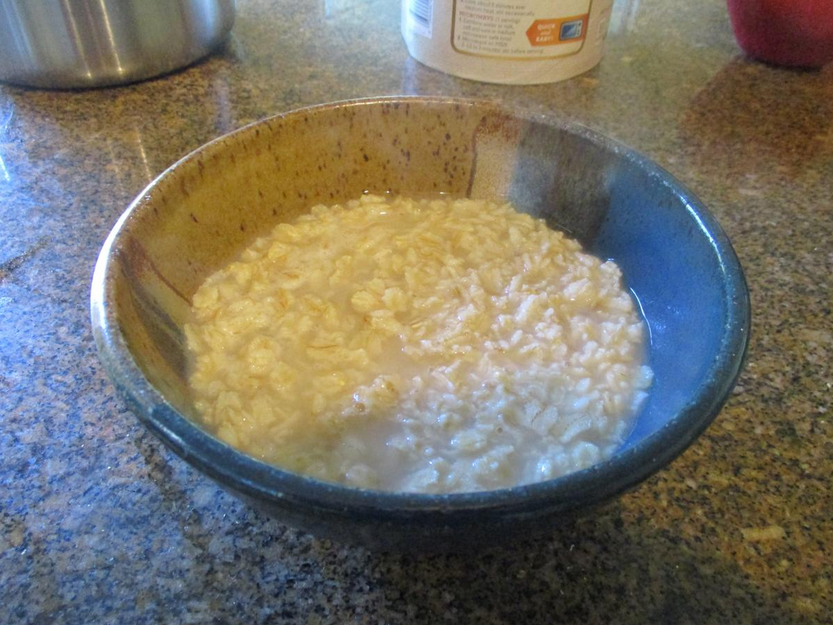 Cooked oatmeal in a bowl. https://handwiki.org/wiki/index.php?curid=1774258

The term "porridge" is often used specifically for oat porridge (oatmeal), which is typically eaten for breakfast with salt, sugar, fruit, milk, cream or butter and sometimes other flavorings. Oat porridge is also sold in ready-made or partly cooked form as an instant breakfast.

Other grains used for porridge include rice, wheat, barley, corn, triticale and buckwheat. Many types of porridge have their own names, such as polenta, grits and kasha.

Historically, porridge was a staple food in much of the world, including Europe and Africa. Porridge remains a staple food in many parts of the world. Porridge was first produced during the paleolithic by hunter-gatherers,[1] but would become common place during the neolithic. The dish has traditionally been closely associated with Scotland, possibly because oats can be successfully cultivated on marginal upland soils.[2] In 1775, Dr. Samuel Johnson wrote that oats were; "A grain which in England is generally given to horses, but in Scotland supports the people".[3] Oats were introduced to Scotland in about 600 AD, but traces of barley porridge have been found in pots excavated in the Outer Hebrides which have been dated to 2,500 years ago.[4]

As well as a breakfast cereal, porridge is used in many cultures as a common snack, and is often eaten by athletes.[5][6][7]

Unenriched porridge (as oatmeal), cooked by boiling or microwave, is 84% water, and contains 12% carbohydrates, including 2% dietary fiber, and 2% each of protein and fat (table). In a 100 gram reference amount, cooked porridge provides 71 Calories and contains 29% of the Daily Value (DV) for manganese and moderate content of phosphorus and zinc (11% DV each), with no other micronutrients in significant content (table).

A 2014 review found that daily intake of at least 3 grams of oat beta-glucan lowers total and low-density lipoprotein cholesterol levels by 5-10% in people with normal or elevated blood cholesterol levels.[8] Beta-glucan lowers cholesterol by inhibiting cholesterol production, although cholesterol reduction is greater in people with higher total cholesterol and LDL cholesterol in their blood.[8] In the United States, the Food and Drug Administration issued a final ruling in 2015 stating that food companies can make health claims on food labels for products containing soluble fiber from whole oats (oat bran, oat flour and rolled oats), noting that 3.0 grams of soluble fiber daily from these foods may reduce the risk of heart disease.[9] To qualify for the health claim, the food that contains the oats must provide at least 0.75 grams of soluble fiber per serving.[9] 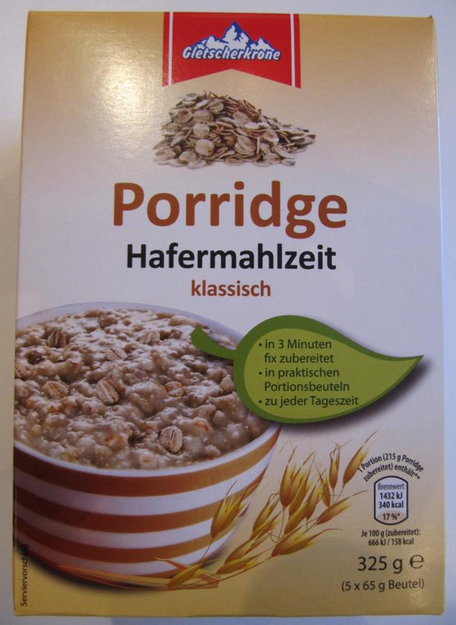 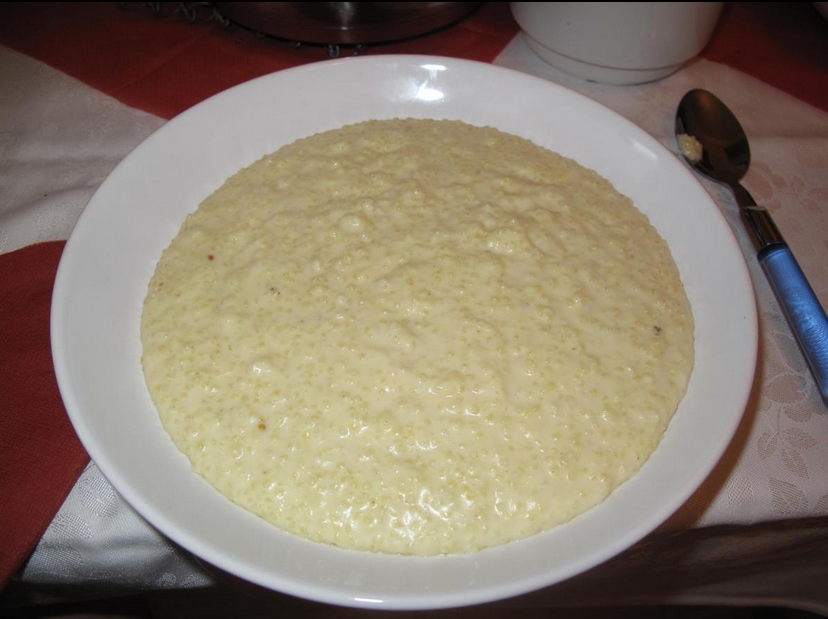 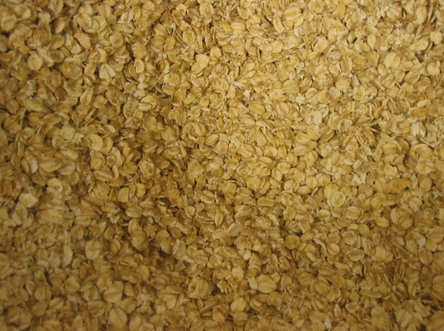 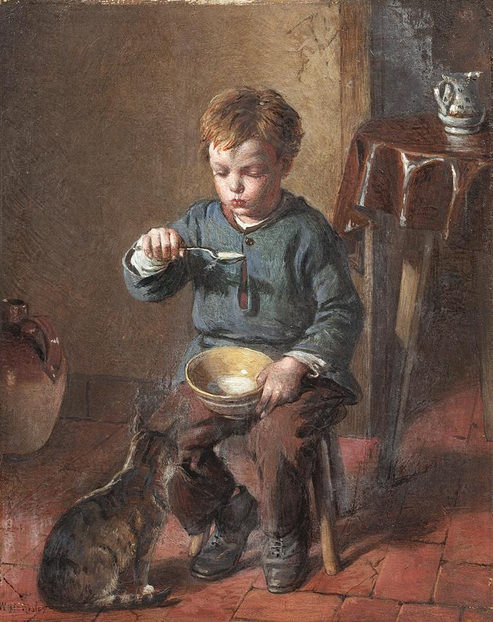 Oats for porridge may be whole (groats), cut into two or three pieces (called "pinhead", "steel-cut" or "coarse" oatmeal), ground into medium or fine oatmeal or steamed and rolled into flakes of varying sizes and thicknesses (called "rolled oats", the largest size being "jumbo"). The larger the pieces of oat used, the more textured the resulting porridge. It is said that, because of their size and shape, the body breaks steel-cut oats down more slowly than rolled oats, reducing spikes in blood sugar and making the eater feel full longer.[19] The US Consumer Reports Web site found that the more cooking required, the stronger the oat flavor and the less mushy the texture.[20]

Oats are a good source of dietary fibre; health benefits are claimed for oat bran in particular, which is part of the grain.

The oats are cooked in milk, water or a mixture of the two. Scottish traditionalists allow only oats, water and salt.[21] There are techniques suggested by cooks, such as presoaking, but a comparative test found little difference in the end result.[21] Various flavorings can be used and may vary widely by taste and locality. Demerara sugar, golden syrup, Greek yoghurt and honey are common. Cold milk or single cream may be used.[21] 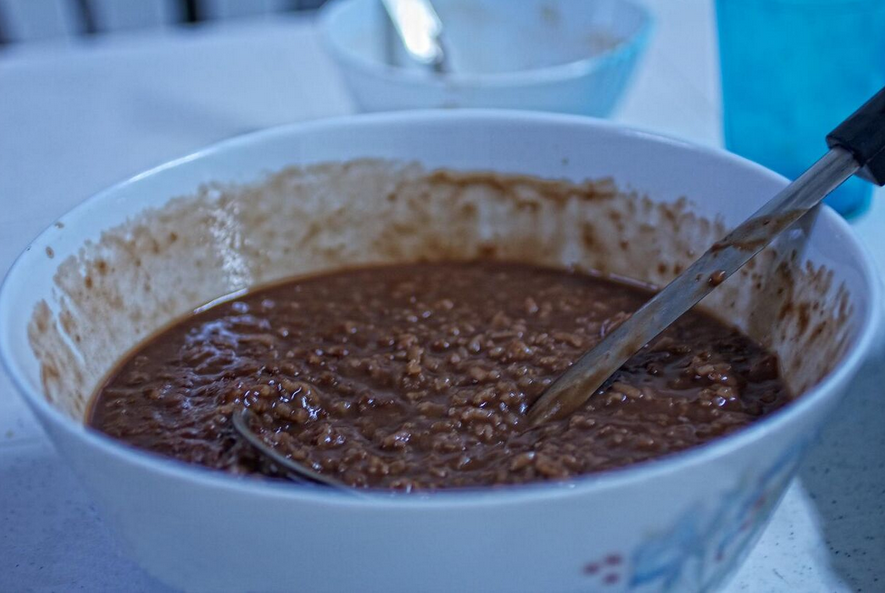 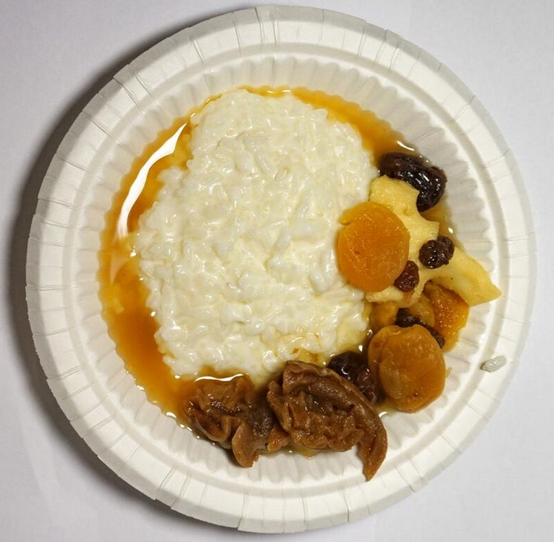 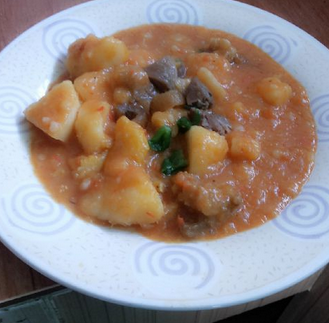 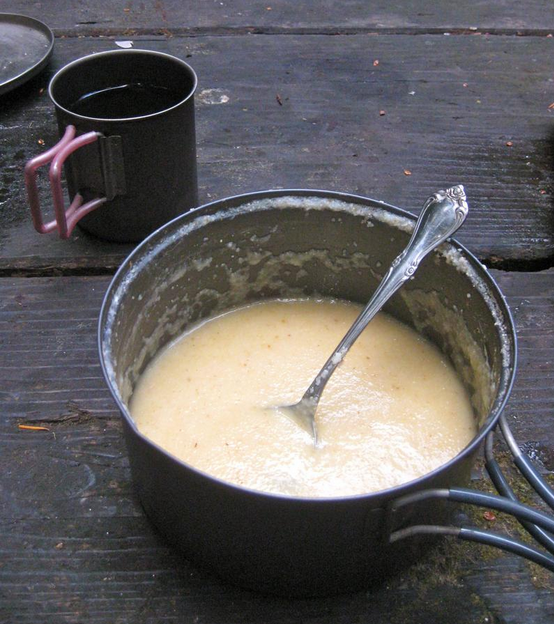 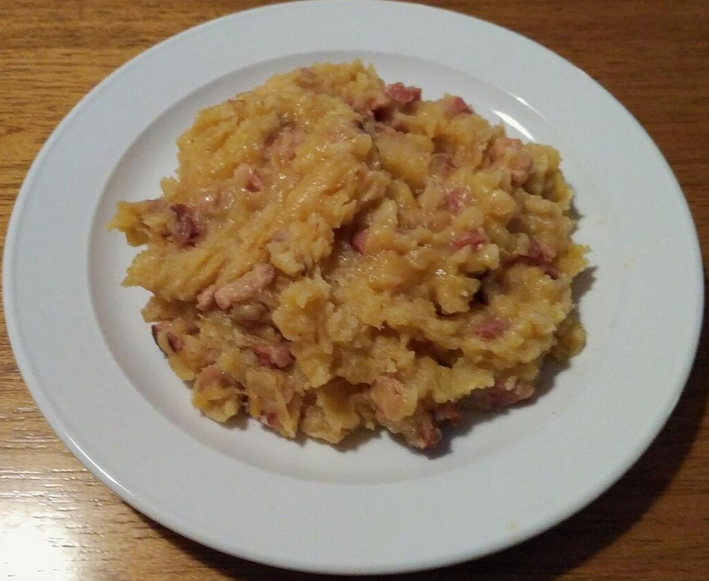 Traditional Estonian rustic porridge Mulgipuder made with potatoes, groats and meat is known as national dish of Estonia. https://handwiki.org/wiki/index.php?curid=1913199 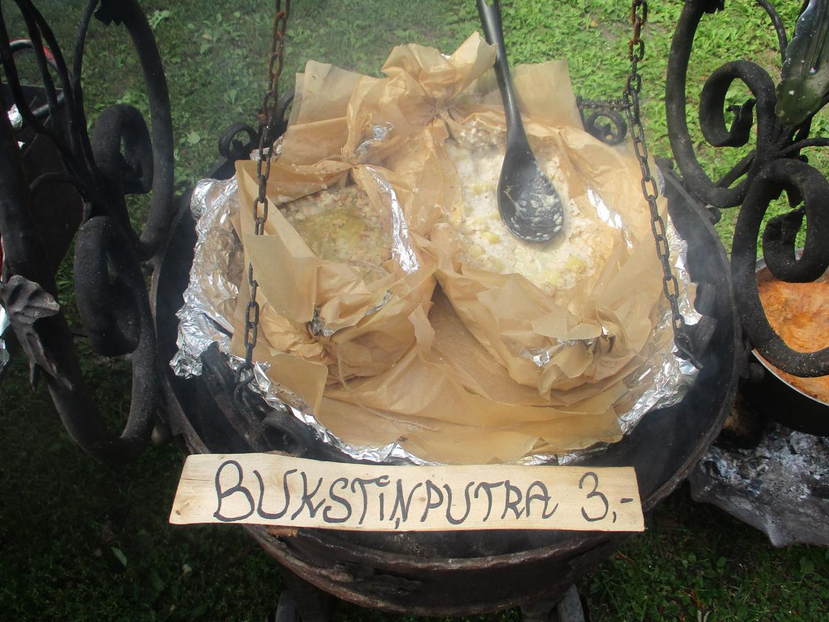 Historically, porridge was a staple food in much of Northern Europe and Russia. It was often made from barley, though other grains and yellow peas could be used, depending on local conditions. It was primarily a savoury dish, with meats, root crops, vegetables and herbs added for flavor. Porridge could be cooked in a large metal kettle over hot coals or heated in a cheaper earthenware container by adding hot stones until boiling hot. Until leavened bread and baking ovens became commonplace in Europe, porridge was a typical means of preparing cereal crops for the table.

Porridge was also commonly used as prison breakfast for inmates in the British prison system during the 19th century and early 20th century, and so "doing porridge" became a slang term for a sentence in prison.[25][26]

More
©Text is available under the terms and conditions of the Creative Commons-Attribution ShareAlike (CC BY-SA) license; additional terms may apply. By using this site, you agree to the Terms and Conditions and Privacy Policy.
Upload a video for this entry
Information
Subjects: Others
Contributor MDPI registered users' name will be linked to their SciProfiles pages. To register with us, please refer to https://encyclopedia.pub/register :
HandWiki
View Times: 40
Entry Collection: HandWiki
Revision: 1 time (View History)
Update Time: 02 Nov 2022
Table of Contents
1000/1000
Hot Most Recent