+1 point
Thank you for your contribution! You can also upload a video entry related to this topic through the link below: https://encyclopedia.pub/user/video_add?id=32150
Check Note
2000/2000
Ke'o Language

Edit
Upload a video
The content is sourced from: https://handwiki.org/wiki/Social:Ke%27o_language

Kéo is an Austronesian language belonging to the Kéo ethnic group (‘ata Kéo, ‘Kéo people’) that reside in an area southeast of the Ebu Lobo volcano in the south-central part of Nusa Tenggara Timur Province on the island of Flores, eastern Indonesia. Kéo belongs to the Malayo-Polynesian, Central-Eastern Malayo-Polynesian, Bima-Lembata subgroups of the Austronesian language family and there are approximately 40,000 speakers. Kéo is sometimes referred to as Nage-Kéo, the Nage being the name of a neighbouring ethnic group that is generally considered culturally distinct from Kéo, however whether or not the two languages are separate entities is ambivalent. Uncommon to Austronesian languages, Kéo is a highly isolating language that lacks inflectional morphology or clear morphological derivation. Instead it relies more heavily on lexical and syntactic grammatical processes.

Kéo (referred to locally as sara kita ‘our language’ or sara ndai ‘the language here’ as well as Bahasa Bajawa ‘The Bajawa Language’ by people not from central Flores) has distinct dialectal variation between villages. Kéo speakers are able to determine where someone is from based on pronunciation and word use.[1]

Overall, the attitude towards Kéo by its speakers is unfavourable. It is considered more economically beneficial to speak Indonesian or English. Despite this sentiment, a sense of respect for the language remains through its oral traditions.[2] 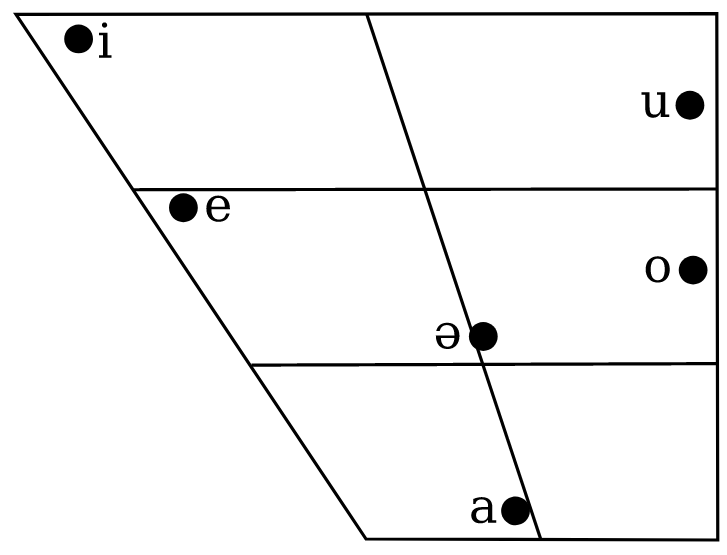 The Kéo spoken in the village of Udiworowatu (where the majority of data has been collected on the language) has a phonemic inventory of 23 consonants.

There is a four-way stop distinction for manner of articulation: voiceless (unaspirated), voiced, preglottalised and prenasalised. This is atypical for an Austronesian language.[3]

Kéo does not have a contrastive distinction between bilabial and labio-dental , hence the term ‘labial’ has been used for the place of articulation.[4]

There are 6 vowel phonemes in Kéo.[5]

In Kéo there are 7 standard pronoun forms that form a closed word class.[6]

Kéo pronouns have the same form irrespective of their syntactic behaviour. They can function as independent pronouns, as subjects, objects or as possessors. There are also no grammatical gender distinctions.[6]

A mosquito bit me.

The alternate pronoun forms in Kéo are ja’o, miu, kita and sira. Their usage can depend on dialectal variants, politeness and taboo avoidance rules and specificity with quantity of people involved in the utterance.[8]

J’ao is an alternate pronoun for nga’o in the first person singular. In the past, the two terms were used as a dialect-identifying feature for the Kéo speaking areas. Nowadays, both pronouns are used and personal preference appears to dictate usage. It has also been noted that a child will apply the term that is used by their mother.[8]

In an example from a Kéo storyteller, both first person pronoun forms are used stylistically to distinguish the main characters during a passage of direct speech, Wodo Bako nga’o and the sorcerer ja’o. This distinction can reflect the storyteller’s partiality towards a character depending on which form they themselves identify with.[9]

After that Wodo Bako then said, “Sorcerer you bring back my younger brother.”

The sorcerer said, “Ok I’ll bring him back.”

Miu as shown in the ‘standard’ pronoun form table above is used to address more than one person, yet it can also be used to show a level of respect and politeness when speaking to someone.

Kita is the pronoun used for first person plural inclusive. In some cases kita is used to replace kami (first personal plural exclusive) when talking about belongings or possession. This switch in pronoun to include the addressee(s) makes the speaker appear more community-minded and generous opposed to being arrogant or selfish.[10]

Whose buffalo are these? Our water buffalo.

Kéo pronouns can be followed by numerals to indicate the exact number of referents. The pronoun-numeral sequence is the only time a number can be used without a classifier. The most common numeral used is rua ‘two’ (9) to create dual pronouns,[11] yet it also acceptable to use any other numeral (10).

Me and Henri’s dad, only us two were siblings.

All five of you go.

More
©Text is available under the terms and conditions of the Creative Commons-Attribution ShareAlike (CC BY-SA) license; additional terms may apply. By using this site, you agree to the Terms and Conditions and Privacy Policy.
Upload a video for this entry
Information
Subjects: Language & Linguistics
Contributor MDPI registered users' name will be linked to their SciProfiles pages. To register with us, please refer to https://encyclopedia.pub/register :
HandWiki
View Times: 21
Entry Collection: HandWiki
Revision: 1 time (View History)
Update Time: 01 Nov 2022
Table of Contents
1000/1000
Hot Most Recent