Submitted Successfully!
Thank you for your contribution! You can also upload a video entry related to this topic through the link below:
https://encyclopedia.pub/user/video_add?id=3145
Check Note
2000/2000
Hepatocellular Carcinoma Microenvironment
Edit
Upload a video
This entry is adapted from 10.3390/cancers12102859

Despite progress in clinical research and therapy, Hepatocellular carcinoma (HCC) is one of one of the most frequent liver cancers and the fourth leading cause of cancer-related mortality worldwide. The hallmark of Immunotherapy as a novel treatment approach represent effective and promising option against several types of cancers including HCC which has led to encouraging results in terms of both safety and efficacy. This entry demonstrates and highlights the importance of tumor microenvironment as a predictive and prognostic marker and its clinical implications in immunotherapy response.

Hepatocellular carcinoma (HCC) accounts for more than 80% of primary liver cancers[1]. HCC is one of the most frequent cancers and the fourth leading cause of cancer-related mortality worldwide[2] accounting for more than 800,000 deaths globally[3]. Moreover, in the next 10 years, more than one million patients are expected to die from liver cancer as estimated by the World Health Organization (WHO)[4]. The majority of HCC patients are males in a ratio of 2.4 to 1 compared to women[5]. Hepatitis B or C (HBV or HCV) is the most common risk factor, accounting for 80% of HCC cases globally[6]. Other factors that increase the risk of HCC are cirrhosis, alcohol abuse, environmental toxins, non-alcoholic fatty liver disease (NAFLD), metabolic diseases such as diabetes mellitus and obesity, smoking, and genetic and hereditary disorders[7][8].

The liver is considered an immune tolerant tissue, a characteristic that can be attributed to the particularities of its physiological function. Liver sinusoidal endothelial cells are exposed to a significant amount of bacterial antigens from portal circulation. These cells act as antigen-presenting cells (APCs) and regulate immunogenicity of liver microenvironment. Their role in normal liver function is to prevent acute response to bacterial agents in order to avoid unnecessary tissue damage[9]. As a result, liver sinusoidal endothelial cells express immunosuppressive molecules, such as programmed cell death ligand-1 (PD-L1). Another important cell type, Kupffer cells, are specialized liver-located macrophages that remove bacteria and produce immunosuppressive cytokines, such as IL-10 and prostaglandins[10]. They can also activate forkhead box P3 (FoxP3) in CD4+ T-cells resulting in proliferation of CD4+ regulatory T cells (Tregs), which negatively regulate immune response[11][12]. HCCs originate predominantly from hepatocytes and non-cancerous lesions (regenerative nodules and adenomas) from hepatic progenitor cells[13]. Increased PD-1 and PD-L1 expression has been observed in HCC patients[14][15], with the expression of PD-L1 associated with tumor aggressiveness and poor prognosis[16][17]. Among the molecular signaling pathways implicated in the pathogenesis of HCC, the Wnt/β-catenin signaling pathway is one of the most frequently activated[18]. Recent studies have shown that WNT/β-catenin signaling correlates with immune escape involving defective recruitment of dendritic cells by reducing CCL5 production and consequently impaired T-cell activity[19]. In addition, β-catenin activation promotes immune escape due to resistance to anti–PD-1 therapy in HCC[15][18][19]. Furthermore, high levels of Tregs in the HCC microenvironment are associated with poor prognosis. Dendritic cells (DCs), another type of APCs, also favor immune tolerance through the same mechanism[20]. Myeloid-derived suppressor cells (MDSCs) play a pivotal role in the development of immune tolerance through the expression of various cytokines (Figure 1), and their increased concentration in HCC tissues is linked to poorer prognosis[21][22]. For example, MDSCs promote tumor angiogenesis through vascular endothelial growth factor (VEGF) production and exert their immunosuppressive function through the induction of the CD4(+)CD25(+)Foxp3(+) Tregs[23][24]. MDSCs suppress natural killer (NK) cells, which limits the release of IFN-γ [25]. Moreover, immunosuppressive tumor-associated macrophages (TAMs) and tumor-associated neutrophils (TANs) impair CD8+ cytotoxic T lymphocytes (CTLs [26][27],while promoting accumulation and activation of CD4+CD25+Tregs[28]. Additionally, these cells express galectin-9, a ligand to TIM-3, an immune checkpoint protein expressed on Th1 cells surface. TIM3/galectin-9 pairing has a variety of effects on T-cells function, most often leading to suppression of immune response (Figure 1)[29] . 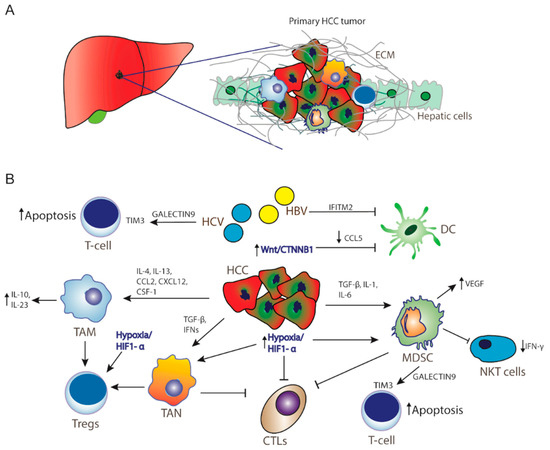 Diagnosis of HCC in the early-stage offers a wide array of treatment options that increase overall survival (OS) and improve quality of life[30]. Unfortunately, due to late diagnosis, 70% to 80% of advanced HCC cases will not benefit from tumor resection[31]. Current treatment options for patients with unresectable HCC include transcatheter arterial chemoembolization (TACE) and the tyrosine kinase inhibitors sorafenib, regorafenib, and lenvatinib. These tyrosine kinase inhibitors are small molecules that inhibit multiple receptor tyrosine kinases implicated in tumor growth and angiogenesis, pathologic bone remodeling, drug resistance, and metastatic progression of cancer. HCC is a highly angiogenic tumor, thus inhibition of vascularization is a reasonable therapeutic strategy. Furthermore, inhibition of VEGF seems to enhance immunotherapy efficacy by exercising an immunomodulatory role in the tumor microenvironment. However, clinical benefit is still limited, and new therapeutic modalities are being explored[32][33][34].

Immunotherapy has proven to be effective and safe in treating a plethora of solid tumors, prolonging OS, and offering a tolerable toxicity profile[35][36][37]. Immunotherapy negates tumor-expressed extracellular ligands that suppress intrinsic immune response. Examples of such molecules are cytotoxic T-lymphocyte-associated antigen 4 (CTLA-4), programmed cell death protein-1 (PD-1), and its ligand, PD-L1. These proteins prevent T cells from recognizing and eliminating cancer cells[38]. This allows regular cells to avoid autoimmune destruction by downregulating T-cell activation. CTLA-4 competitively inhibits binding of B7 ligands to the co-stimulatory receptor CD-28, while PD-1 binds to PD-L1 and PD-L2 ligands, preventing T-cell activity in peripheral tissues[39]. Overexpression of PD-L1 has been detected in the microenvironment of several solid tumors, such as esophageal, colon, pancreatic, gastric, lung, breast[40], and HCC[41]. Checkpoint inhibitors are antibodies that activate T-cell mediated antitumor responses by selectively blocking the checkpoint receptors PD-1, PD-L1, and CTLA-4[42]. Targeting one or more of these receptors could mediate tumor regression in patients with melanoma, lung cancer, renal cell carcinoma, urothelial cancer, head and neck cancer, and other malignancies[43].

On the other hand, therapeutic cancer vaccines use a tumor-associated antigen (TAA) originating either from whole-cell tumor lysates and recombinant tumor peptides or full-length proteins or recombinant viruses encoding for TAAs. TAAs are transferred and presented by major histocompatibility complex (MHC) class I molecules in APCs to effectively induce activation of cytotoxic T-lymphocytes (CTLs)[44][45]. Another strategy in immune-regulated antitumor response is that of adoptive cell transfer (ACT). Immune cells are extracted from patients’ peripheral blood and undergo genetic engineering to express chimeric antigen receptors (CARs). These cell membrane proteins bind to specific cancer antigens stimulating immune destruction of tumor cells[46].

As previously mentioned, most cases of HCC are associated with chronic hepatitis infection. Thus, TME in HCC usually presents elements of chronic inflammation. Liver tissue in patients with HCC has a high concentration of CD8+ CTLs[47], however, they are suppressed and proliferate at a reduced rate. This T-Cell exhaustion is linked to overexpression of co-stimulatory molecules, such as B7-1 (CD80) and B7-2 on CD4+ T-cells and CD137 on CD8+ and NK cells. These molecules are vital points in the signaling of immune checkpoint pathways B7-CD28/CTLA-4 and PD-L1/PD-L2/PD-1[48]. This immunosuppressive TME prevents tumor antigen detection by DCs via suppression of TAA and MHC molecules through the expression of inhibitory molecules (IL-10, TGF-β, VEGF) (Figure 1)[49]. Other important extracellular ligands that suppress antitumor immune response are TIM-3 and LAG-3 proteins and mutated MHC type I receptors[50]. The existence of a high amount of exhausted CD8+ T-cells that overexpress negative co-stimulatory molecules, such as PD-L1, represents a clue for the use of ICIs in HCC. A high level of PD-L1 is also an adverse prognostic factor, thus increasing the need for effective treatment in this group of patients[51]. Several clinical trials have evaluated the safety and efficacy of anti-PD-L1 in HCC patients with hepatitis, though no data have been powered for statistical comparison. Predictive Biomarkers in HCC Immunotherapy.

Identification of patients’ subgroups that would benefit from ICI remains a mainstay goal of cancer research and several biomarkers have been explored in solid tumors. Apart from PD-1/PD-L1 expression, another common predictor of tumor response is microsatellite instability (MSI). MSI refers to random mutations occurring in small repetitive elements due to a defective (mismatch repair) MMR[52][53]. The accumulation of random mutations leads to increased neoantigen formation by the cells and target antigens for the immune system, promoting the expression of inflammatory cytokines and T-cell activation, thus rendering tumors susceptible to immunotherapy[54]. MSI high status (MSI-H) in HCC is rare, occurring in less than 3%[55][56][57][58][59]. Interestingly, another analysis, which included 122 patients with HCC, revealed no tumors displaying a typical MSI-H phenotype defined by PCR-based MSI testing[59]. Despite its rarity, inflammation-mediated dysfunction of the MMR pathway can contribute to the accumulation of mutations during hepatitis-associated tumorigenesis. Moreover, tumor mutational burden (TMB) analysis is useful as an agnostic histologic indicator to identify patients who can benefit from ICIs, and the use of PD-1 inhibitors is recommended in this setting as second or later line treatment[55].

Despite advances in cancer treatment and translational research, HCC is still associated with inferior outcomes and high mortality. However, many clinical trials seek to evaluate the efficacy of immunotherapy in HCC, including ICIs, cancer vaccines, ACT, and combinations with chemoradiotherapy or other molecularly targeted agents, yielding some encouraging results. So far, immunotherapeutic strategies have been proved safe; however, studies of single ­agent ICIs failed to show a survival benefit compared to combination therapies. Importantly, combinations of immunotherapy with other modalities have resulted in better OS and PFS. The optimization of the best strategy remains challenging, mainly because of the low TMB and immune-suppressive environment on which HCC arises. Despite the encouraging results of a few MSI-H tumor cases which responded to immunotherapy, MSI-H phenotype seems to be a rare phenomenon in HCC. On the other hand, genetic profiling of HCC using NGS and identification of patients with HCC likely to benefit from immunotherapies, have shown promising results. Further analysis of NGS data will soon allow a better understanding of tumor heterogeneity and its potential role in treatment decision making by identifying HCC patients likely to benefit from immunotherapies. This is also supported by recent results in WNT/β-catenin association with immune evasion and resistance to anti-PD-1 therapy. Low number of mutations hampers the production and release of neo-antigens and subsequently leads to low number of TILs. Additionally, HCC immunosuppressive TME creates a significant barrier to the efficacy of immunotherapy agents. Further research needs to focus on overcoming immunotherapy resistance by targeting multiple immune defects using combinatorial approaches of immunotherapy and cytotoxic agents in patients with HCC.

More
© Text is available under the terms and conditions of the Creative Commons Attribution (CC BY) license; additional terms may apply. By using this site, you agree to the Terms and Conditions and Privacy Policy.
Upload a video for this entry
Information
Subjects: Oncology
Contributor MDPI registered users' name will be linked to their SciProfiles pages. To register with us, please refer to https://encyclopedia.pub/register :
Christo KOLE
View Times: 156
Revisions: 3 times (View History)
Update Time: 14 Dec 2020
Table of Contents
1000/1000
Hot Most Recent