+1 point
Thank you for your contribution! You can also upload a video entry related to this topic through the link below: https://encyclopedia.pub/user/video_add?id=31361
Check Note
2000/2000
Bow Shocks in Astrophysics

Edit
Upload a video
The content is sourced from: https://handwiki.org/wiki/Physics:Bow_shocks_in_astrophysics

Bow shocks form the boundary between a magnetosphere and an ambient (or at least surrounding) magnetized medium. This occurs when the magnetic field of an astrophysical object interacts with the nearby flowing ambient plasma. For example, when the solar wind, flowing with a relative speed of order 400 km/s, encounters the magnetic field of Earth, a bow shape boundary forms. For Earth and other magnetized planets, it is the boundary at which the speed of the stellar wind abruptly drops as a result of its approach to the magnetopause. For stars, this boundary is typically the edge of the astrosphere, where the stellar wind meets the interstellar medium.

A common complication in astrophysics is the presence of a magnetic field. For instance, the charged particles making up the solar wind follow spiral paths along magnetic field lines. The velocity of each particle as it gyrates around a field line can be treated similarly to a thermal velocity in an ordinary gas, and in an ordinary gas, the mean thermal velocity is roughly the speed of sound. At the bow shock, the bulk forward velocity of the wind (which is the component of the velocity parallel to the field lines about which the particles gyrate) drops below the speed at which the particles are gyrating.

The best-studied example of a bow shock is that occurring where the Sun's wind encounters Earth's magnetopause, although bow shocks occur around all planets, both unmagnetized, such as Mars[1] and Venus [2] and magnetized, such as Jupiter[3] or Saturn.[4] Earth's bow shock is about 17 kilometres (11 mi) thick[5] and located about 90,000 kilometres (56,000 mi) from the planet.[6]

For several decades, the solar wind has been thought to form a bow shock at the edge of the heliosphere, where it collides with the surrounding interstellar medium. Moving away from the Sun, the point where the solar wind flow becomes subsonic is the termination shock, the point where the interstellar medium and solar wind pressures balance is the heliopause, and the point where the flow of the interstellar medium becomes subsonic would be the bow shock. This solar bow shock was thought to lie at a distance around 230 AU[7] from the Sun – more than twice the distance of the termination shock as encountered by the Voyager spacecraft. However, data obtained in 2012 from NASA's Interstellar Boundary Explorer (IBEX) indicates the lack of any solar bow shock.[8] Along with corroborating results from the Voyager spacecraft, these findings have motivated some theoretical refinements; current thinking is that formation of a bow shock is prevented, at least in the galactic region through which the Sun is passing, by a combination of the strength of the local interstellar magnetic-field and of the relative velocity of the heliosphere.[9] 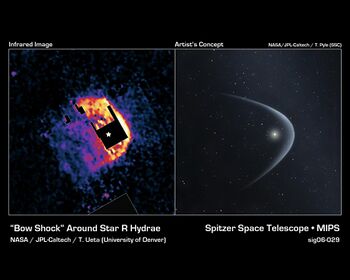 The bow shock around R Hydrae[11]

Bow shocks are also a common feature in Herbig Haro objects, in which a much stronger collimated outflow of gas and dust from the star interacts with the interstellar medium, producing bright bow shocks that are visible at optical wavelengths.

The following images show further evidence of bow shock existence from dense gases and plasma in the Orion Nebula.

If a massive star is a runaway star, it can form an infrared bow-shock that is detectable in 24 μm and sometimes in 8μm of the Spitzer Space Telescope or the W3/W4-channels of WISE. In 2016 Kobulnicky et al. did create the largest spitzer/WISE bow-shock catalog to date with 709 bow-shock candidates.[12] To get a larger bow-shock catalog the citizen science project Milky Way Project aims to map infrared bow-shocks in the galactic plane. This larger catalog will help to understand the stellar wind of massive stars.[13] 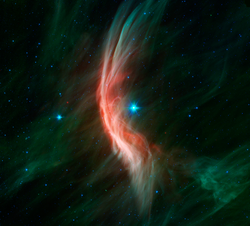 Zeta Ophiuchi is the most famous bowshock of a massive star. Image is from the Spitzer Space Telescope. https://handwiki.org/wiki/index.php?curid=1087193

The closest stars with infrared bow-shocks are:

Most of them belong to the Scorpius–Centaurus Association and Theta Carinae, which is the brightest star of IC2602, might also belong to the Lower Centaurus-Crux subgroup. Epsilon Persei does not belong to this stellar association.[14]

A similar effect, known as the magnetic draping effect, occurs when a super-Alfvenic plasma flow impacts an unmagnetized object such as what happens when the solar wind reaches the ionosphere of Venus:[15] the flow deflects around the object draping the magnetic field along the wake flow.[16]

The condition for the flow to be super-Alfvenic means that the relative velocity between the flow and object, [math]\displaystyle{ v }[/math], is larger than the local Alfven velocity [math]\displaystyle{ V_A }[/math] which means a large Alfvenic Mach number: [math]\displaystyle{ M_A \gg 1 }[/math]. For unmagnetized and electrically conductive objects, the ambient field creates electric currents inside the object, and into the surrounding plasma, such that the flow is deflected and slowed down as the time scale of magnetic dissipation is much longer than the time scale of magnetic field advection. The induced currents in turn generate magnetic fields that deflect the flow creating a bow shock. For example, the ionospheres of Mars and Venus provide the conductive environments for the interaction with the solar wind. Without an ionosphere, the flowing magnetized plasma is absorbed by the non-conductive body. The latter occurs, for example, when the solar wind interacts with Moon which has no ionosphere. In magnetic draping, the field lines are wrapped and draped around the leading side of the object creating a narrow sheath which is similar to the bow shocks in the planetary magnetospheres. The concentrated magnetic field increases until the ram pressure becomes comparable to the magnetic pressure in the sheath:

More
©Text is available under the terms and conditions of the Creative Commons-Attribution ShareAlike (CC BY-SA) license; additional terms may apply. By using this site, you agree to the Terms and Conditions and Privacy Policy.
Upload a video for this entry
Information
Subjects: Others
Contributor MDPI registered users' name will be linked to their SciProfiles pages. To register with us, please refer to https://encyclopedia.pub/register :
HandWiki
View Times: 130
Entry Collection: HandWiki
Revisions: 2 times (View History)
Update Time: 27 Oct 2022
Table of Contents
1000/1000
Hot Most Recent