Submitted Successfully!
Thank you for your contribution! You can also upload a video entry related to this topic through the link below:
https://encyclopedia.pub/user/video_add?id=3136
Check Note
2000/2000
Carotid Body
Edit
Upload a video
This entry is adapted from 10.3390/ijms21218231

Overview of the physiology of the adult carotid body, the main peripheral chemoreceptor in mammals, which contains a physiologically relevant germinal niche with multipotent neural crest-derived stem cells and restricted progenitors from both neural and mesenchymal lineages. The carotid body (CB), a neural-crest-derived organ and the main arterial chemoreceptor in mammals, is composed of clusters of cells called glomeruli.

The carotid body (CB), a paired organ located in the bifurcation of the carotid artery, is the main and prototypical polymodal arterial chemoreceptor in mammals. Despite its small size, the CB has relevant physiological functions due to its ability to detect changes in several physical and chemical parameters in the blood, such as pH, CO2 tension, glucose, lactate, temperature, and blood flow among others, to produce compensatory adaptive responses (see for a recent review [1]). An additional stimulus for CB activation of particular physiological relevance is the decrease in O2 tension in arterial blood (hypoxemia), a frequent condition faced by people who live at or travel to high altitudes and are thus exposed to low atmospheric air pressure and decreased O2 diffusion into the blood. CB activation is also critical to aid survival in patients with severe respiratory syndromes that cause a reduction of the O2 exchange capacity between the air and the pulmonary capillaries. A decline in arterial O2 tension is detected by CB O2-sensing cells, which rapidly (in few seconds) activate sensory fibers of the glossopharyngeal nerve impinging on neurons in the brainstem and autonomic centers to induce hyperventilation and increased heart rate. In this way, both O2 uptake and its distribution to the tissues are enhanced. Although there are other organs in the body acutely responding to hypoxia [2], activation of the CB is essential for organismal homeostasis because neurons in the respiratory center are insensitive to systemic changes in O2 tension. Indeed, bilateral removal of the CB in humans leaves individuals unaware of hypoxemia and with complete abolition of the hypoxic ventilatory response [3].

The CB parenchyma is organized into clusters of cells called glomeruli. Each glomerulus is considered an independent chemo-sensitive unit composed by four to eight neuron-like glomus cells, also called type I cells, which are richly innervated by sensory fibers of the petrosal ganglion and in close contact with a profuse network of fenestrated capillaries. Glomus cells are the O2-sensing elements in the CB; they contain abundant synaptic vesicles [4][5] with several neurotransmitters and neuropeptides (see below), which are rapidly released in response to hypoxia to activate the afferent sensory fibers. Glomus cells contain a broad variety of voltage- and ligand-gated ion channels, are electrically excitable, and can generate action potentials repetitively [6][7]. Hypoxia leads to glomus cell depolarization, extracellular Ca2+ influx and transmitter release due to modulation of O2-sensitive membrane ion channels [7][8][9][10][11]. Responsiveness to hypoxia is an intrinsic property of glomus cells, although it can be modulated by auto- and paracrine interactions within the glomerulus and by circulating agents such as cytokines or hormones (see [1]). The mechanisms underlying O2 sensing have remained elusive [12], although recent data strongly suggest that molecular specializations in glomus cell mitochondria confer upon them special sensitivity to hypoxia [13][14][15], with the generation of mitochondrial signals (NADH and reactive oxygen species) that modulate membrane ion channels [16][17]. In addition to the chemo-sensitive glomus cells, which are highly dopaminergic and can be easily identified using antibodies against tyrosine hydroxylase (TH), the CB glomeruli also contain a smaller number of type II, or sustentacular, cells with interdigitating processes that envelop glomus cells. Type II cells can be stained with antibodies against glial fibrillary acidic protein (GFAP), an intermediate filament commonly expressed in glial cells. Although type II cells were originally described as supportive cells, with little functional relevance, this view has completely changed in recent years (see below). Type II cells contribute to potentiation of the glomus cell-afferent sensory fiber synapse [18]. Moreover, type II cells, or a subpopulation of them, are tissue-specific adult multipotent stem cells that support CB structural plasticity [19]. In addition to the two main cell types, the CB contains intermediate progenitors, abundant macrophages, and fat cells.

In parallel to its role in the acute detection of changes in blood O2 levels, the CB is essential for organismal adaptation to maintained hypoxemia, such as seen in high altitude residents [20][21][22], or in patients suffering chronic cardiopulmonary diseases [23][24]. In response to chronic hypoxia, the CB parenchyma grows several-fold its size, with a marked increase in the number of glomeruli, as well as a profuse angiogenesis [22][25] that facilitates irrigation of the newly generated chemoreceptor elements (Figure 1A,B). This process, which implies “neurogenesis” or production of new neuronal chemoreceptor cells, tunes the sensitivity of the organ to hypoxia, facilitating physiological reflex responses, such as the hypoxic ventilatory acclimatization [26][27]. 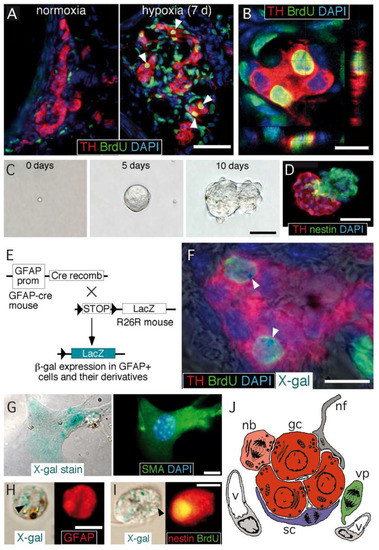 CB growth in response to chronic sustained hypoxia is mainly due to activation of type II cells, which, as indicated above, are neural crest-derived, multipotent stem cells  [19]. These cells contribute to both neurogenesis and angiogenesis by proliferating and differentiating into glomus and vascular cells, respectively  [19][29][30]. CB stem cells (CBSCs) form clonal colonies (neurospheres) in culture (Figure 1C), where they recapitulate the formation of glomeruli with a core of nestin-positive progenitors and blebs of TH-positive cells (Figure 1D). These in vitro newly generated TH-positive cells resemble glomus cells in situ, as they express the characteristic voltage-gated ion channels and release neurotransmitters in response to hypoxia  [19]. Cell fate-mapping experiments using transgenic mice (Figure 1E) strongly suggest that CB type II cells can differentiate into glomus (Figure 1F) and vascular cells, such as smooth muscle cells (Figure 1G). CB sustentacular cells achieve their germinal role by interchanging quiescent (GFAP-positive; Figure 1H) and proliferative (nestin-positive; Figure 1I) states, depending on the activity of the niche. Interestingly, although the structure of CB-derived neurospheres is similar in various species studied [31], the number of TH-positive cells in the blebs is much smaller in mice or humans than in the rat, suggesting that differentiation of type II cells into a glomus cell lineage may change according to animal species or environmental factors (see below). In addition to mature glomus cells and type II cells, the resting CB parenchyma also contains restricted progenitors belonging to either neuronal or vascular lineages. We have characterized a population of immature (TH-positive) neuronal cells or neuroblasts (nb in Figure 1J), present in the periphery of glomeruli, that have the capacity to proliferate and rapidly mature into new chemosensory glomus cells in response to hypoxia [32]. Similarly, we have also identified the presence of restricted vascular progenitors (vp in Figure 1J) that are resting in normoxia but rapidly proliferate and migrate towards blood vessels to contribute to angiogenesis in response to hypoxia [29][30][33]. A common anatomical feature shared by all these progenitor cells is their localization in the proximity of glomus cells. This structural disposition supports the hypothesis that glomus cells function as master regulators that, by means of the release of neurotransmitters, can modulate the activity of the various progenitors in the niche. In fact, we have shown that in vivo stabilization of HIFs by systemic administration of dimethyloxaloylglycine (DMOG), an inhibitor of prolyl-hydroxylases (PHDs), does not induce a CB cell proliferation similar to hypoxia (Figure 2A−C). This finding suggests that direct stabilization of HIFs in the hypoxic CB niche is not sufficient to get a full proliferative response, but rather some indirect signaling from glomus cells might be necessary. In agreement with this idea, experiments performed with neurospheres in vitro have shown that CB multipotent progenitor proliferation is insensitive to hypoxia (Figure 2D,E), even though these progenitor cells are able to increase dopaminergic differentiation in response to the lack of oxygen (Figure 2D−G). It has been reported that hypoxia-induced proliferation of some lineages in the CB niche, such as the immature neuronal lineage, is impaired in HIF2α-deficient mice [32][34], and that responsiveness of glomus cells to hypoxia is also strongly inhibited in this same mouse model [14]. Therefore, the available data suggest that the proliferative response of CB cells under hypoxia depends on the activation of O2-sensitive glomus cells and the release of paracrine mediators which activate neighboring stem cells and progenitors. However, this response may be complemented with a direct action of hypoxia on progenitors of the various CB cell lineages [32]. 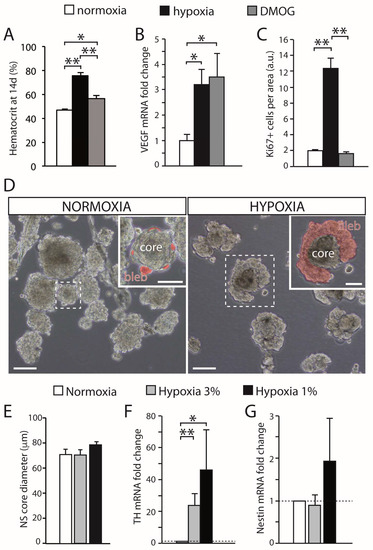 Figure 2. Effect of hypoxia on carotid body growth. (A) Quantification of the hematocrit in rats exposed to hypoxia (10% O2) or maintained in a normal atmosphere and treated with DMOG for 14 days, in comparison with normoxic rats. Note that inhibition of prolyl hydroxylases with DMOG increased the hematocrit, although to a lesser extent than hypoxia. (B) Quantitative PCR showing the induction of VEGF, a HIF-dependent gene, in the brain of rats exposed to normoxia, hypoxia, or treated with DMOG. (C) Quantification of the density of Ki67-positive cells within the CB parenchyma of rats exposed to normoxia (21% O2), hypoxia (10% O2), or DMOG (21% O2) for 3 days. DMOG did not increase cell proliferation in the CB despite the fact it induced HIF-dependent genes (3 rats per group). (D) Bright-field images of CB primary neurospheres cultured under normoxia (21% O2) or hypoxia (3% O2). Differentiating blebs of TH-positive cells are pseudo-colored in red in the insets. Scale bars: 100 µm (50 µm in insets). (E) Quantification of neurosphere core diameter in cultures grown at different levels of hypoxia (6 cultures for normoxia and hypoxia 3% O2, and 3 cultures for hypoxia 1% O2). (F,G) qPCR results showing relative expression of tyrosine hydroxylase (TH) and nestin in neurospheres at different levels of O2 tension. The expression of TH significantly increased under hypoxia, whereas nestin expression showed a non-significant variability (n = 7 cultures in normoxia and hypoxia 3% O2; 4 cultures for hypoxia 1% O2). Error bars are SEM. * p < 0.05; ** p < 0.01. Modified from [35].

More
© Text is available under the terms and conditions of the Creative Commons Attribution (CC BY) license; additional terms may apply. By using this site, you agree to the Terms and Conditions and Privacy Policy.
Upload a video for this entry
Information
Subjects: Cell Biology ; Others
Contributor MDPI registered users' name will be linked to their SciProfiles pages. To register with us, please refer to https://encyclopedia.pub/register :
Ricardo Pardal
View Times: 215
Revisions: 2 times (View History)
Update Time: 23 Nov 2020
Table of Contents
1000/1000
Hot Most Recent