Submitted Successfully!
Thank you for your contribution! You can also upload a video entry related to this topic through the link below:
https://encyclopedia.pub/user/video_add?id=3086
Check Note
2000/2000
Catalytic Ozonation and Membrane Contactors
Edit
Upload a video
This entry is adapted from 10.3390/w12112964 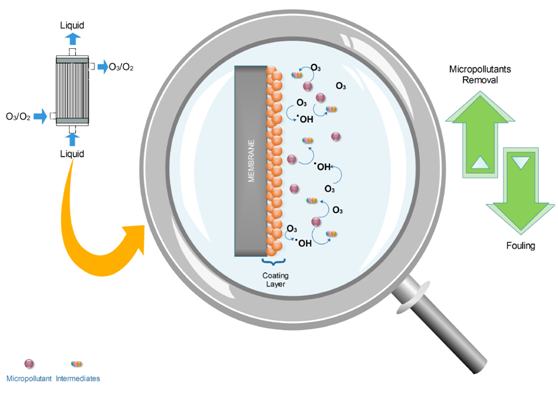 Ozone is a strong oxidant agent that can be used in water and wastewater treatment operations for the removal/oxidation of organic/inorganic pollutants, as well as of microorganisms. Ozone can participate into the respective oxidation reactions via two major routes, i.e., (1) it can directly react with the pollutants, or (2) it can be decomposed into hydroxyl radicals and these (more) reactive species can then react with the contaminants[2]. Ozone decomposes into hydroxyl radicals (HO•) by a 3-step mechanism, which involves initiation reactions, radical chain reactions, and a termination step. The overall reaction of ozone decomposition into HO• is:

More specific information about the complex ozone reaction mechanisms can be found in the reference of Gottschalk et al.[3]. The main disadvantages of the ozonation process are considered to be the relatively slow oxidation/reaction time and the high energy requirements[4]. Although ozone is used frequently, especially in water treatment applications (mainly for disinfection purposes), its production cost is still quite high. The high cost is mainly a function of pure mass-transfer operation and its production process[5]. Overall, the efficiency of the ozonation process is considered rather low and several ways to improve it have been proposed[6].

The conventional ozone contactors are based on bubble diffusers, injectors and static mixers[6]. These types of reactors present rather small mass-transfer rates, because they are producing bubbles with quite small contact area (interface)[7]. Due to the low use efficiency, an excess amount of ozone is necessary to be produced/added in order to be able to achieve the required ozone dosefor the respective reactions to be effectively taking place[8]. A more eco-friendly approach is considered the use of membranes as efficient ozone diffusers/contactors, improving the respective mass transfer operation[7].

Membrane contactors are appropriate modules that can help the transfer of a constituent between a gas and a liquid phase and they are quite frequently used in ozone-based oxidation processes. The membrane is the interface that allows the two phases to flow separately. The introduction of this technology increases substantially the capital cost of ozonation process, but as counter-balance it can decrease also the operational cost (due to limited ozone losses) and eventually to increase the overall process efficiency[9]. The membranes that are used as contactors in the ozonation processes must have three important attributes, i.e., (1) long-term stability to ozone exposure, (2) surface hydrophobicity, and (3) porosity[10]. The material used for the construction of most membrane contactors is polymeric, but the use of these materials in ozone-based processes is rather limited, due to the oxidation reactivity of ozone and the potential quick destruction of these organic-based membranes. Therefore, ceramic membranes are more frequently selected. These membranes are mostly tubular, while the polymeric membranes can be also available as flat-sheet, or hollow-fiber configurations[8]. In terms of micropollutants’ removal the NF membranes are more suitable for their separation, since they can operate at rather low pressures and their pore sizes are around the size of such compounds[4]. The most investigated membrane contactors for ozone diffusion are based on the application of direct ozonation. According to the this concept, ozone alone is considered to be incapable of mineralizing the refractory organic compounds; however, their degradation can be significantly improved by the combination of a membrane contactor with a proper catalyst, leading to the catalytic ozonation process[8].

Catalytic ozonation has been a highly studied treatment process during recent years and it is based on the acceleration of HO• production to degrade the refractory organic compounds, such as most micropollutants are. Catalytic ozonation can be divided in two main categories, based on the type of catalyst that will be applied, i.e.,homogeneous catalytic ozonation (using mainly dissolved transition metals) and heterogeneous catalytic ozonation (using mainly specific solid materials). Regardless of the type of catalytic ozonation the main goal of this process is the higher efficiency of oxidation system, or the use of reduced ozone amount to reach the same efficiency, when compare to the application of single ozonation. That requires the acceleration of HO• production, which present an electro-chemical potential of 2.7 V, i.e., they are considered as more powerful oxidant agents, than the application of single ozone (2.07 V) and also, they can participate unselectively in the oxidation reactions taking place[3].

Membranes modified with metal oxide particles, proved to prevent fouling and to present higher efficiencies, regarding the removal/degradation of organic pollutants. However, some membranes are prepared from materials with inherent catalytic activity and therefore, can enhance the production of hydroxyl radicals without any further modification. The most commonly applied relevant materials are Al2O3, TiO2, and ZrO2[18][19]. There are five main factors that can influence the catalytic performance of a membrane[4][20][21][22]:

The most convenient used oxides, applied as coatings in catalytic membranes, are iron and manganese oxides. Park et al.[22] coated a γ-Al2O3 membrane with iron oxide nanoparticles. From the flux experiments it was obvious that the combination of ozone with the catalytic membrane can decompose/mineralize and alter the characteristics of NOM and as a consequence, membrane fouling was also significantly reduced. Guo et al.[23] used a ceramic membrane modified/deposited with CuMn2O4 particles to enhance the removal of benzophenone-3, as compared to the respective virgin membrane and to the application of single ozonation. In the ozonation process superoxide ions (O2•−) and H2O2 were produced, promoting the molecular ozone decomposition into HO•, and that generation was enhanced during the application of catalytic ozonation process. Consequently, the larger molecular weight organic molecules were able to degrade to smaller molecules, or to be transformed to hydrophilic ones.

In most cases ceramic membranes have been used in catalytic ozonation systems, because the substrate material is simpler to be coated. However, Yu et al.[24] coated a PVDF (polymeric) membrane with MnO2 nanoparticles. They observed that the presence of MnO2 surface layer lowered the fouling rate. For the initial 10 days of operation the increase of Trans-Membrane Pressure (TMP) was very small, partly as a consequence of ozone presence, limiting the development of biological activity and the bio-accumulation of several components onto the membranes’ surface. Furthermore, Sun et al.[25] doped such a membrane with nano-TiO2 to examine the removal of nitrobenzene. Under acidic conditions the removal rate of the pollutant was rather low, but that was increased with the increase of pH values. At alkaline pH values the decomposition of ozone is accelerated, but when the pH value was higher than 10, the nitrobenzene removal rate was (again) reduced, because under the influence of highly alkaline conditions the produced HO• radicals can be quickly decomposed into O− and H+. Therefore, higher efficiency was obtained at the max. pH value 10.

Almost all the researchers have observed that the catalytic membrane ozonation follows a mechanism based on radicals. The predominant radical species in most cases were the HO•. In some cases both HO• and O2•− radicals were found to participate in the catalytic reaction[20]. However, Scarati et al.[21] noticed that when they used a CuO-coated membrane for the 1,4-dioxane oxidation/removal, then the primarily oxidative species were the O2•−. Although the production of O2•− is a part of ozone decomposition mechanism for the formation of HO• (e.g.,[3][26]), it seems that in this case the decomposition pathways were different. The obtained results were not very promising and this membrane maybe not suitable for catalytic reactions.

Except for the removal of micropollutants some researchers have used the catalytic ozonation induced by membrane contacting process also for the removal of bacteria. The relevant studies have shown that the metal oxides, such as iron oxides, can retard the transport of bacteria. The adhesion of bacteria to a metal oxide surface will increase the retention of them at the membrane interface and subsequently, the contact of bacteria with ozone will be prolonged. Ozone reacts with the catalytic surface and HO• or other radical species would be formed and inactivate the bacteria near them. Therefore, this mechanism enhances the disinfection behavior of the treatment system[27][28].

Although coupling catalytic membranes with ozonation seems to be a promising technology, the stability of applied coatings constitutes a quite important issue of concern. In most cases the amounts of initially deposited metals leached into the aqueous solutions during the operation and can lead to a secondary pollution problem. Even for the metals without established regulation limits (e.g., Sn), their potential occurrence in drinking water sources can raise some health issues. Moreover, the relevant studies about the formation of ozonation by-products and their acute potential toxicity will be still considered to be essential, because they can be an additional pollution source[29][30]. Finally, the coating techniques must be further developed, especially regarding the application of more ozone-resistant polymeric materials, and new solid materials can be examined for deposition onto the membranes surface, acting as potential catalysts, leading to the increase of catalyst range/options.

More
© Text is available under the terms and conditions of the Creative Commons Attribution (CC BY) license; additional terms may apply. By using this site, you agree to the Terms and Conditions and Privacy Policy.
Upload a video for this entry
Information
Subjects: Environmental Sciences
Contributors MDPI registered users' name will be linked to their SciProfiles pages. To register with us, please refer to https://encyclopedia.pub/register :
Anastasios Zouboulis
,
Savvina Psaltou
View Times: 342
Revisions: 2 times (View History)
Update Time: 18 Nov 2020
Table of Contents
1000/1000
Hot Most Recent