+1 point
Thank you for your contribution! You can also upload a video entry related to this topic through the link below: https://encyclopedia.pub/user/video_add?id=30783
Check Note
2000/2000
Napoleon's Theorem

Edit
Upload a video
The content is sourced from: https://handwiki.org/wiki/Napoleon%27s_theorem

In geometry, Napoleon's theorem states that if equilateral triangles are constructed on the sides of any triangle, either all outward or all inward, the lines connecting the centres of those equilateral triangles themselves form an equilateral triangle. The triangle thus formed is called the inner or outer Napoleon triangle. The difference in area of these two triangles equals the area of the original triangle. The theorem is often attributed to Napoleon Bonaparte (1769–1821). Some have suggested that it may date back to W. Rutherford's 1825 question published in The Ladies' Diary, four years after the French emperor's death, but the result is covered in three questions set in an examination for a Gold Medal at the University of Dublin in October, 1820, whereas Napoleon died the following May.

In the figure above, ABC is the original triangle. AZB, BXC, and CYA are equilateral triangles constructed on its sides' exteriors, and points L, M, and N are the centroids of those triangles. The theorem for outer triangles states that triangle LMN (green) is equilateral.

There are in fact many proofs of the theorem's statement, including a synthetic (coordinate-free) one,[3] a trigonometric one,[4] a symmetry-based approach,[5] and proofs using complex numbers.[4] 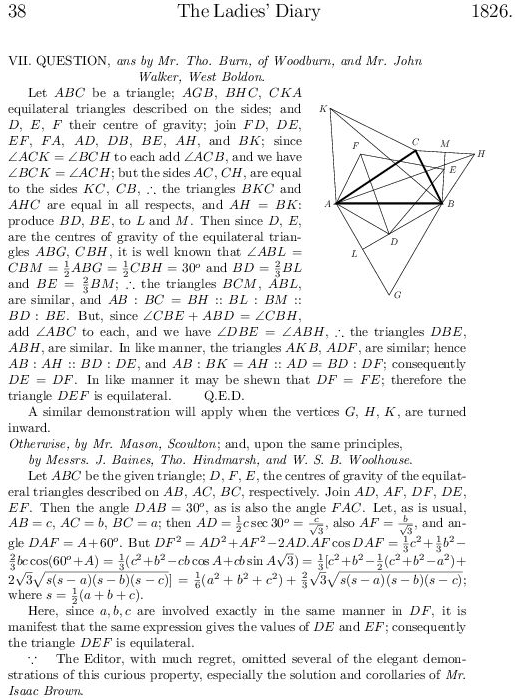 Extract from the 1826 Ladies' Diary giving geometric and analytic proofs

The theorem has frequently been attributed to Napoleon, but several papers have been written concerning this issue[6][7] which cast doubt upon this assertion (see (Grünbaum 2012)).

The following entry appeared on page 47 in the Ladies' Diary of 1825 (so in late 1824, a year or so after the compilation of Dublin examination papers). This is an early appearance of Napoleon's theorem in print, and Napoleon's name is not mentioned.

Since William Rutherford was a very capable mathematician, his motive for requesting a proof of a theorem that he could certainly have proved himself is unknown. Maybe he posed the question as a challenge to his peers, or perhaps he hoped that the responses would yield a more elegant solution. However, it is clear from reading successive issues of the Ladies Diary in the 1820s, that the Editor aimed to include a varied set of questions each year, with some suited for the exercise of beginners.

Plainly there is no reference to Napoleon in either the question or the published responses, which appeared a year later in 1826, though the Editor evidently omitted some submissions. Also Rutherford himself does not appear amongst the named solvers after the printed solutions, although from the tally a few pages earlier it is evident that he did send in a solution, as did several of his pupils and associates at Woodburn School, including the first of the published solutions. Indeed, the Woodburn Problem Solving Group, as it might be known today, was sufficiently well known by then to be written up in A Historical, Geographical, and Descriptive View of the County of Northumberland ... (2nd ed. Vo. II, pp. 123–124). It had been thought that the first known reference to this result as Napoleon's theorem appears in Faifofer's 17th Edition of Elementi di Geometria published in 1911,[8] although Faifofer does actually mention Napoleon in somewhat earlier editions. But this is moot, because we find Napoleon mentioned by name in this context in an encyclopaedia by 1867. What is of greater historical interest as regards Faifofer is the problem he had been using in earlier editions: a classic problem on circumscribing the greatest equilateral triangle about a given triangle that Thomas Moss had posed in the Ladies Diary in 1754, in the solution to which by William Bevil the following year we might easily recognize the germ of Napoleon's Theorem - the two results then run together, back and forth for at least the next hundred years in the problem pages of the popular almanacs: when Honsberger proposed in Mathematical Gems in 1973 what he thought was a novelty of his own, he was actually recapitulating part of this vast, if informal, literature.

It might be as well to recall that a popular variant of the Pythagorean proposition, where squares are placed on the edges of triangles, was to place equilateral triangles on the edges of triangles: could you do with equilateral triangles what you could do with squares - for example, in the case of right triangles, dissect the one on the hypotenuse into those on the legs? Just as authors returned repeatedly to consider other properties of Euclid's Windmill or Bride's Chair, so the equivalent figure with equilateral triangles replacing squares invited - and received - attention. Perhaps the most majestic effort in this regard is William Mason's Prize Question in the Lady's and Gentleman's Diary for 1864, the solutions and commentary for which the following year run to some fifteen pages. By then, this particular venerable venue - starting in 1704 for the Ladies' Diary and in 1741 for the Gentleman's Diary - was on its last legs, but problems of this sort continued in the Educational Times right into the early 1900s.

In the Geometry paper, set on the second morning of the papers for candidates for the Gold Medal in the General Examination of the University of Dublin in October 1820, the following three problems appear.

Question 12. To investigate the relation between the area of the given triangle and the areas of these two equilateral triangles.

These problems are recorded in

Question 1249 in the Gentleman's Diary; or Mathematical Repository for 1829 (so appearing in late 1828) takes up the theme, with solutions appearing in the issue for the following year. One of the solvers, T. S. Davies then generalized the result in Question 1265 that year, presenting his own solution the following year, drawing on a paper he had already contributed to the Philosophical Magazine in 1826. There are no cross-references in this material to that described above. However, there are several items of cognate interest in the problem pages of the popular almanacs both going back to at least the mid-1750s (Moss) and continuing on to the mid-1860s (Mason), as alluded to above.

As it happens, Napoleon's name is mentioned in connection with this result in no less a work of reference than Chambers's Encyclopedia as early as 1867 (Vol. IX, towards the close of the entry on triangles).

Another remarkable property of triangles, known as Napoleon's problem is as follows: if on any triangle three equilateral triangles be described, and the centres of gravity of these three be joined, the triangle thus formed is equilateral, and has its centre of gravity coincident with that of the original triangle.

This curious proposition I have not met with, except in the Dublin Problems, published in 1823, where it is inserted without demonstration.

In the second edition (1837), Thomson extended the endnote by providing a proof from a former student in Belfast:

The following is an outline of a very easy and neat proof it by Mr. Adam D. Glasgow of Belfast, a former student of mine of great taste and talent for mathematical pursuits:

Thus, Thomson does not appear aware of the appearance of the problem in the Ladies' Diary for 1825 or the Gentleman's Diary for 1829 (just as J. S. Mackay was to remain unaware of the latter appearance, with its citation of Dublin Problems, while noting the former; readers of the American Mathematical Monthly have a pointer to Question 1249 in the Gentleman's Diary from R. C. Archibald in the issue for January, 1920, p. 41, fn. 7, although the first published solution in the Ladies Diary for 1826 shows that even Archibald was not omniscient in matters of priority).

The centers of both the inner and outer Napoleon triangles coincide with the centroid of the original triangle. This coincidence was noted in Chambers's Encyclopaedia in 1867, as quoted above. The entry there is unsigned. P. G. Tait, then Professor of Natural Philosophy in the University of Edinburgh, is listed amongst the contributors, but J. U. Hillhouse, Mathematical Tutor also at the University of Edinburgh, appears amongst other literary gentlemen connected for longer or shorter times with the regular staff of the Encyclopaedia. However, in Section 189(e) of An Elementary Treatise on Quaternions,[11] also in 1867, Tait treats the problem (in effect, echoing Davies' remarks in the Gentleman's Diary in 1831 with regard to Question 1265, but now in the setting of quaternions):

If perpendiculars be erected outwards at the middle points of the sides of a triangle, each being proportional to the corresponding side, the mean point of their extremities coincides with that of the original triangle. Find the ratio of each perpendicular to half the corresponding side of the old triangle that the new triangle may be equilateral.

Tait concludes that the mean points of equilateral triangles erected outwardly on the sides of any triangle form an equilateral triangle. The discussion is retained in subsequent editions in 1873 and 1890, as well as in his further Introduction to Quaternions [12] jointly with Philip Kelland in 1873.

4. Areas and Sides of Inner and Outer Napoleon Triangles

The area of the outer Napoleon triangle is[15]

Analytically, it can be shown[4] that each of the three sides of the outer Napoleon triangle has a length of

The relation between the latter two equations is that the area of an equilateral triangle equals the square of the side times [math]\displaystyle{ \sqrt{3} / 4. }[/math] 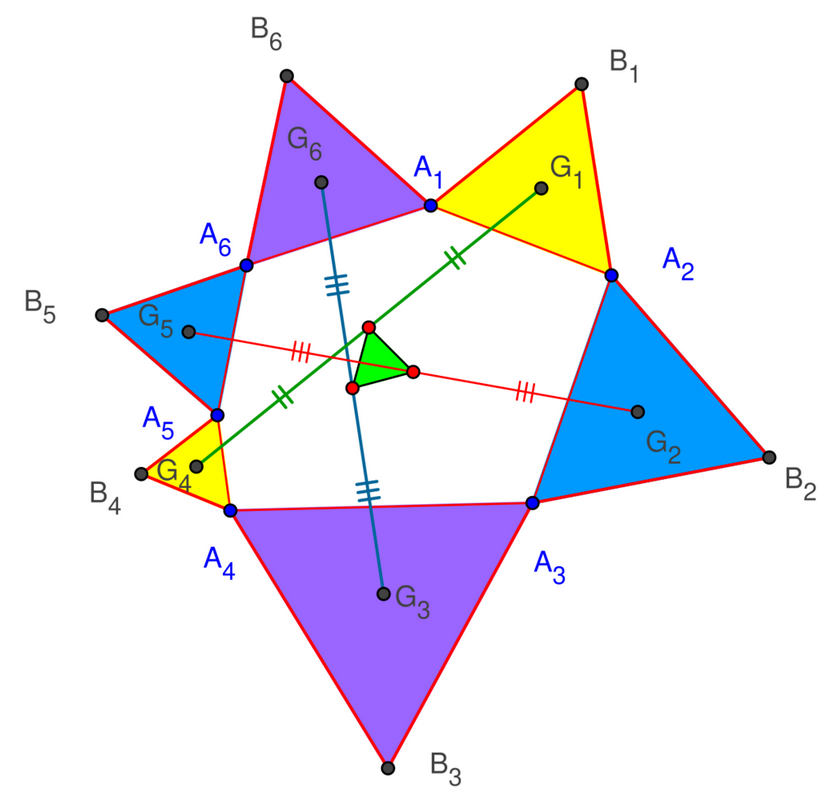 Equilateral triangles on the sides of an arbitrary hexagon: When A1=A4, A2=A5, A3=A6 this theorem becomes the Napoleon theorem

If isosceles triangles with apex angles 2kπ/n are erected on the sides of an arbitrary n-gon A0, and if this process is repeated with the n-gon formed by the free apices of the triangles, but with a different value of k, and so on until all values 1 ≤ k ≤ n − 2 have been used (in arbitrary order), then a regular n-gon An−2 is formed whose centroid coincides with the centroid of A0.[16]

More
©Text is available under the terms and conditions of the Creative Commons-Attribution ShareAlike (CC BY-SA) license; additional terms may apply. By using this site, you agree to the Terms and Conditions and Privacy Policy.
Upload a video for this entry
Information
Subjects: Others
Contributor MDPI registered users' name will be linked to their SciProfiles pages. To register with us, please refer to https://encyclopedia.pub/register :
HandWiki
View Times: 38
Entry Collection: HandWiki
Revision: 1 time (View History)
Update Time: 24 Oct 2022
Table of Contents
1000/1000
Hot Most Recent