Submitted Successfully!
Thank you for your contribution! You can also upload a video entry related to this topic through the link below:
https://encyclopedia.pub/user/video_add?id=2948
Check Note
2000/2000
Wall Mosaics: on-site non-invasive diagnostics
Edit
Upload a video
This entry is adapted from 10.3390/jimaging6100108

This entry concerns the challenges and perspectives of on-site non-invasive measurements applied to valuable wall mosaics. The choice of the appropriate technique or combination of different techniques depends on a variety of factors: the depth of investigation, the resolution, the possibility to have direct contact with the surfaces or, on the contrary, limited accessibility of the wall mosaics due to their location (e.g., vaults), as well as deterioration problems, (e.g., voids, detachments, or humidity effects). This entry illustrates briefly the current state of the art in the field of non-invasive diagnostic methodsavailable for the study of wall mosaics (IRT, GPR, DHSPI, DHSPI-SIRT, SLDV, HSR), considering their potentials, limitations and future development frontiers.

Wall mosaics, during the centuries, decorated numerous buildings, nowadays being part of world cultural heritage. The preservation and maintenance of these valuable decorations are undoubtedly directly dependent on identifying possible problems that could affect their hidden structure. On-site non-invasive methods, using different contact or no-contact technologies, can offer support in this specific field of application.

Although each study case is different, the three fundamental challenges in wall mosaic diagnostics are represented by their complex, layered structure, presence of inhomogeneities (e.g., nails), and location (limited accessibility).

The ancient wall mosaics, in general, are layered structures (Figure 1a), composed in most cases by three main levels: (1) a superficial decoration layer constituted by tesserae; (2) two or more different mortar layers; (3) wall structure made by bricks o stones [1][2][3][4][5][6][7][8][9]. While stone tesserae were mostly used in floor mosaics, glass tesserae dominate in wall mosaics. The most well known and preserved wall mosaics are of the ancient Roman, Greek, and Byzantine medieval periods.

The Byzantine wall mosaics were mostly realized in several stages directly on the wall, covering it by three different thickness layers of lime mortar. The first two layers were commonly made of lime, bricks, and cut straw, while the third contained only lime and marble powder[9]. 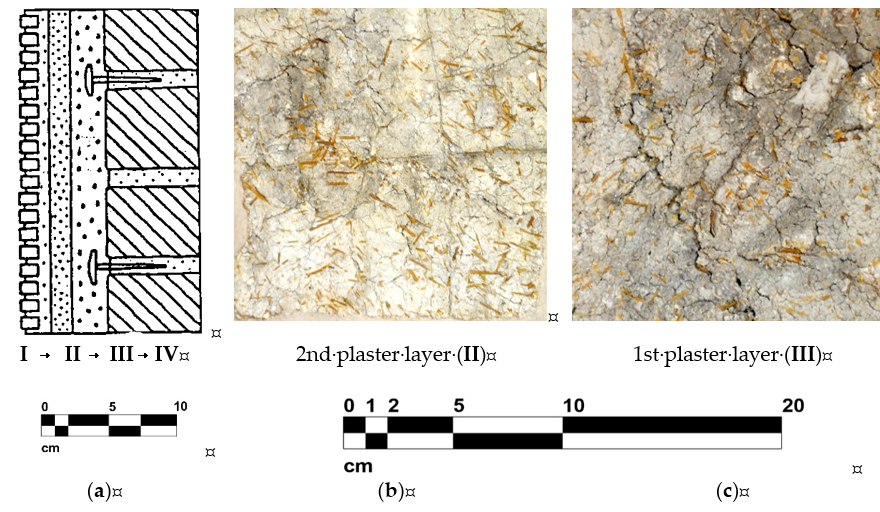 Cut straw was sometimes added to improve the binding characteristics and to control the migration of moisture between pores [3][4][9]. To enhance the cohesion between the layers, the first and the second mortar layers presented a rough surface, with deep bumps or ripples made by the tip of the trowel , as shown in Figure 1b,c, creating an irregular subsurface. To ensure the mortar layer (e.g., on vaults), strong steel flat-headed nails were often placed protruding the wall, as shown in Figure 1a. The final (bedding) layer of mortar could contain additives as linseed oil and adhesive substances to ensure the slowing down of mortar setting while often not regularly placing the tesserae. The tesserae were predominantly made of glass-paste, containing metal oxides, or a gold leaf, extensively used for gilded backgrounds, halos, and details of religious scenes in the churches [1][2][3][4][5][6][7][8][9]. Ancient wall mosaics have been often restored and/or reshuffled over the centuries without documentation of these interventions.

Highly valuable historical and archaeological sites are characterized by limited accessibility due to opening hours to visitors or site logistical conditions. Besides, wall mosaics are often located in high, hardly accessible, or inaccessible parts of buildings (domes, vaults etc.). The limitations are represented by the need to use scaffoldings (if available), by the form of the structural support, and by the impossibility to respect the necessary geometry of the acquisitions (distance, access on both sides of the wall etc.).

3. Some Examples of Applications of Non-Invasive Methods to Study Wall Mosaics

From a theoretical point of view, there is a wide range of non-invasive methods and related instruments applied in engineering and cultural heritage studies.

The use of high-frequency GPR antennas (2 GHz) increased in the last two decades in the field of cultural heritage inspections [10][11][12][13][14][15][16][17][18][19][20][21], with some examples also including wall mosaics structure analysis. Based on the propagation of electromagnetic waves, geophysical methods, applied mainly in environmental and archaeological studies, gained popularity also in the cultural heritage field of investigation thanks to its capability for the fast and easy identification of voids and moisture content variations, both related to the contrast of dielectric permittivity. These aspects are crucial in the localization of in-homogeneities, presence of voids, and moisture content mapping and time-lapse monitoring of these phenomena in mosaic wall analysis. On the other hand, despite the fast and easy acquisition of the data, the principal limitation in using this powerful non-invasive method of investigation is represented by the needed contact between the antenna and the investigated surface that often preclude its application.

The infrared thermography is an on-site no-contact method widely applied to cultural heritage studies [22][23][24][25][26][27][28][29], with documented applications on wall mosaics analysis. The principle of infrared thermography consists of measuring, without contact, all thermal variations detectable on the surface by the infrared radiation. In general, the thermal variations could indicate different materials, including inhomogeneities, under the decoration layer. Although this measurement refers only to the first few centimeters below the decoration, it represents a perfect combination with the GPR method to identify shallow voids (detachments) or humidity, mainly where the contact with the surface is not admitted. Active infrared thermography, or also called stimulated infrared thermography, foresees to induce a minimal thermal excitation artificially to the surface of the investigated mosaic decoration, in order to increase characteristic thermal differences [22]. The use of passive thermography is preferred when the method is applied to cultural heritage objects; nevertheless, it does not always provide efficient results. The accuracy of temperature measurements is limited when the inspected surface consists of various types of materials with different emissivity values and if there are no naturally occurring thermal contrasts, in particular when examining vault/dome mosaics at a long distance.

The two above-mentioned established techniques can be complemented by other structural diagnostic methods, which are not systematically used in real case studies yet. They can be divided into two groups: (1) on-site non-invasive techniques with documented applications on real wall mosaics, which include seismic methods (sonic and ultrasonic testing) and electrical resistivity tomography (ERT), and (2) non-invasive methods, tested in laboratory conditions but to the authors’ awareness never applied on real case studies yet, including electro-optic holography (ESPI), digital holographic speckle pattern interferometry (DHSPI) applied in combination with stimulated infrared thermography (DHSPI-SIRT), holographic subsurface radar (HSR), scanning laser doppler vibrometry (SLDV).

The principle of acoustic methods lies in the measurement of sonic/ultrasonic wave velocity propagation through the material. The interpretation of the results is based on the analysis of wave propagation velocity, which differs for different kinds of medium and is altered by the presence of cracks, voids, moisture areas etc. [30]. It is suitable for the evaluation of subsurface and deep wall structure. However, it cannot be regularly applied to highly precious surfaces. The main limitations of seismic methods include their manual contact operation and possible invasivity for deteriorated areas, and insufficient resolution for shallow depth levels.

The principle of electrical resistivity tomography lies in the characterization of the subsurface materials in terms of their electrical properties [31][32]. It can create a 3D representation of electrical resistivity distribution inside the examined objects, e.g., walls underneath a mosaic decoration. It provides the possibility to localize humidity (and then the provenience of the water infiltration and rise) or the presence of cracks and voids, as well as with the GPR method. The principal limitation on ERT applicability on wall decorations is its invasivity. Although the use of medical electrodes is possible, commonly to guarantee the better signal to noise ratio, the use of micro-electrodes (nails) is preferred. This invasivity then effectively limits the use of the ERT method in the mosaic wall analysis. Some studies were carried out in order to overcome this limitation, in particular, by limiting the number of mini electrodes. This method, in its current operation mode, still cannot be regularly applied to real wall mosaic decorations.

Innovative optical techniques are of particular interest in the structural evaluation of cultural heritage objects. Interferometric methods were tested during the last decades in laboratory conditions for non-contact full-field wall mosaic subsurface structural evaluation. The first documented application on a mosaic wall model refers to the method called electro-optic holography, or electronic speckle pattern interferometry (ESPI). It is the optical technique that enables interferometric measurements of surface displacements upon induced stress [33][34] and can be considered as a video equivalent of holographic interferometry [35][36].

Complementary approach by DHSPI-SIRT and HSR was studied in 2018 on a custom-built mosaic model with known defects and subsurface mortar inhomogeneities, covered by glass paste, golden leaf, and stone tesserae [37]. The DHSPI system was capable of detecting the stitches between mortar portions with slightly variable composition, as well as the presence of voids, detachments, and cracks underneath the mosaic decoration layer (Figure 2). The differences in the mortar (application mode, slight changes in the proportions of ingredients) were observed on an interferogram starting from very low thermal excitations (less than 1 °C). All the applied excitation values were below Δt = 3.5 °C, within the limits of allowed indoor museum temperature fluctuations. The SIRT results acquired simultaneously to DHSPI, did not reveal internal mortar characteristics but were useful to locate and to confirm the presence of detachments and, through subsequent data analysis, the presence of hidden metallic elements (nails, a mounting plate) and wooden sticks. Different studies on advanced potentials of active infrared thermography for revealing hidden layers and deterioration problems, e.g., through different acquisition and data processing modes [38] or the automatic detection of inhomogeneities [39], are available too. 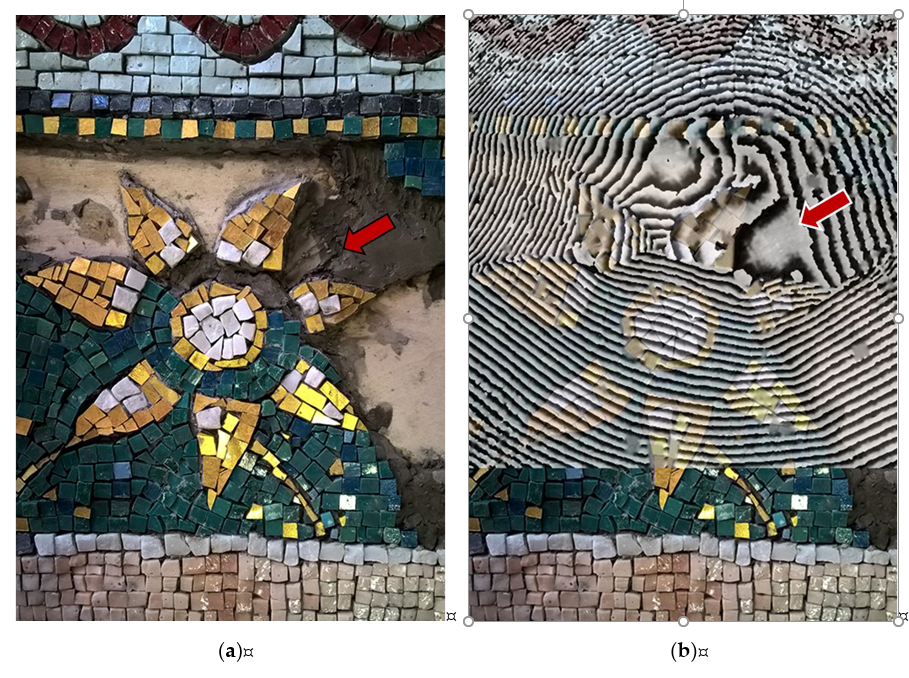 Figure 2. Digital holographic speckle pattern interferometry (DHSPI) results in a custom-built mosaic model. Efficient recognition of mortar inhomogeneity, stitches, and cracks: (a) sample preparation in progress, detail of mortar application with a defect; (b) Interferogram at 170 s after Δt = 3.1 °C thermal excitation on a completed mosaic model, overlap with the photographic documentation of the sample preparation (25% transparency mode). After Chaban et al.[37].

The review of scientific publications dedicated to the complex non-invasive study of wall mosaics showed that a variety of methods is available, which are already or potentially applicable in-situ, at their current development stage or, hopefully, through further improvements, in the next future.

Further frontiers of the development of these and new methods are represented by increasing the informativity, feasibility, and timing, while decreasing invasivity, contact operation, and costs. There is a strong demand for further development of full-field visualization and non-contact methods, providing a comprehensive structural evaluation approach at all the depth levels. This non-invasive and non-destructive structural evaluation, in an ideal case, will be performed in automated monitoring mode. This will support the achievement of the fundamental goal in the field of cultural heritage diagnostics: timely and efficient detection, prevention of deterioration, limiting loss, microsampling, or any other impact and keeping alterations to a minimum, as an exception, or finally to zero.

More
© Text is available under the terms and conditions of the Creative Commons Attribution (CC BY) license; additional terms may apply. By using this site, you agree to the Terms and Conditions and Privacy Policy.
Upload a video for this entry
Information
Subjects: Architecture And Design ; Others ; Archaeology
Contributor MDPI registered users' name will be linked to their SciProfiles pages. To register with us, please refer to https://encyclopedia.pub/register :
Antonina Chaban
View Times: 289
Revisions: 2 times (View History)
Update Time: 10 Nov 2020
Table of Contents
1000/1000
Hot Most Recent