Submitted Successfully!
Thank you for your contribution! You can also upload a video entry related to this topic through the link below:
https://encyclopedia.pub/user/video_add?id=292
Check Note
2000/2000
Wearable User Interface
Edit
Upload a video
This entry is adapted from 10.3390/app10020640

Portable force feedback devices for surgical simulators have been developed using DEAs. The first portable force feedback device was suggested by Zhang et al. in 2004 [[3]]. Chain-like actuators made from planar DEAs are attached to the backside of the index finger to give force feedback. They are made of VHB 4910 pre-stretched to 0.109 mm thickness as dielectric elastomer films and a 250 nm thickness of beaten gold as the compliant electrode. The device performs a maximum force of 0.7 N at 4.5 kV under an initial pre-strain force of 4 N, and a maximum elongation of 10.2% at 4.5 kV under a load of 230 g. To enhance the output force of DEAs, multi-layered, multi-element, or multi-layer-element configurations were suggested. One way to improve output force is to use rolled DEAs [[4]]. The rolled DEAs have a compact structure and enhanced energy density, compared to planar DEAs. They are composed of 30–40 layers of VHB 4910, are 12 mm in diameter, and 45 mm in height. The portable force feedback device using rolled DEAs exerts a maximum force of 7.2 N and displays a maximum elongation of 11% at 3.5 kV.

Tactile displays using DEAs have been researched for many years. By using DEAs, the disadvantages of conventional tactile displays, such as difficulty in miniaturization and fabrication, low power density, high cost, and rigidity, can be overcome [[5]]. The first tactile display using DEAs was suggested by Choi et al. in 2008 [[5]]. Their system is composed of 4 × 5 arrays of actuators as shown in Figure 1b. To be completely soft, each actuator is composed of a polymer, especially Nusil CF-2186, with the carbon powder solution as a compliant electrode, a 2 mm diameter and 0.002 g weight. The active layer consists of eight 200  thick layers. The actuator demonstrated an output force of over 13.6 mN at 3.5 kV and 0.1 Hz, which is equivalent to a force-weight ratio of 6.8 N/g.

Pre-straining DE materials could be one solution in enhancing the energy density of DEAs. However, a rigid frame is needed to maintain the pre-strain. To solve this issue, a method of embedding nylon fibers into the DEA was suggested [[6]]. The insertion of nylon does not deteriorate the breakdown voltage nor operation of a DEA due to the nylon’s insulation property and low bending stiffness. A nylon-embedded module is attached to the forearm and conveys the shear force to the wearer. As another structure of DE tactile display, hydrostatically-coupled DEAs (HC-DEA) were suggested by Carpi et al. in 2010 [[7]]. The configuration of HC-DEAs for a tactile interface is shown in Figure 1c. The bubble-like form of HC-DEA is due to silicone-oil placed between the active membrane and the passive membrane. Since the active membrane is electrically connected and the passive membrane is the end-effector, the silicone oil’s placement ensures electrical safety [[8]]. Both active and passive membranes consist of bi-axially 400% pre-stretched VHB 4910. Carbon grease is used as a compliant electrode to the active membrane. This actuator is 10 mm in radius and 7 mm in height. In this research, the maximum force is 0.6 N at a working voltage of 4.5 kV. To improve the output force of the HC-DEA, adopting a stacked active membrane was introduced [[9]]. The active membrane is made of three layers of bi-axially 300% pre-stretched VHB 4910 and carbon grease as a compliant electrode. The thickness of the passive membrane is also matched to maintain the shape of the actuator. As a result, the maximum force is measured as 0.7 N under the working voltage of 4.0 kV. By using stacked HC-DEAs and increasing the thickness of the passive membrane, not only was the output force enhanced, but the working voltage was also decreased. 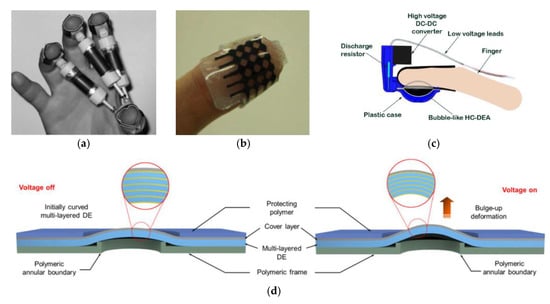 Lower sustainability against pressurized contact is also a limitation of DEAs used as a wearable interface [[10]]. As shown in Figure 1d, a perforated protecting polymer is formed on the actuator to prevent the actuator from being initially pressurized. This structure can be utilized to create a glove-type tactile display, that can give embossed feedback at fingertips, or a patched display that can give vibro-tactile feedback to the forearm. This actuator consists of six stacks of 100  Elastosil P7670 as dielectric elastomers, and silver nanowires (AgNWs) as compliant electrodes. The diameter of the active area is 15 mm. The maximum force is reported as 255 mN at 4 kV and the resonant frequency is 191 Hz, while the maximum vertical protrusion is 650 μm under an unloading condition and at 4 kV and 1 Hz.

Research about the development of DE micro-actuators, which concentrate force on a localized area, was introduced in 2020 [[11]]. The DE micro-actuators are fabricated through photolithography, and the dimension of each micro-actuator is 200 μm × 7 mm × 400 μm. They are made of Sylgard 184 as the dielectric elastomer and AgNWs as compliant electrodes. With these DE micro-actuators, the tactile display is organized into an array, generating more than 30 times the force of the forearm vibro-tactile displacement perception threshold at 20 MV/m.

There are also other possible wearable interface applications of DEAs. An active compression bandage using DEAs was suggested. It can be taken on and off easily, fits different calf sizes, and is provided in small size modules [[12]]. Also, the compression magnitude of the bandage can be modulated by changing the initial pre-stretch ratio or working voltage. A hand tremor suppression using DEAs was also introduced [[13]]. Undesired motions by Parkinsonian tremors have faster frequency (more than 3 Hz) than voluntary motion (0~2 Hz). By creating the motion which has that frequency of tremor, the movement can be canceled out. DEAs are attached to the wrist to reduce tremors in the flexion and extension direction. In addition to presenting these possibilities, researches on controller design and parameter design are being conducted [[14],[15]]. Recently, research applying textile DEAs on a wearable interface has been conducted. In particular, replacing compliant electrodes with stretchable and conductive textiles have been investigated [[16]].

Wearable interfaces represent one of the recently emerging applications of DEAs. However, there are several challenges in the use of DEAs as actuators embedded into wearable devices. For example, reducing driving voltage is an issue to be solved with a high priority. High operating voltage often causes additional cost in terms of electronics as well as insulation. In addition, the insulation layers lead to output force degradation. Therefore, for low driving voltage DEA devices, we need to consider various factors including structural design, electronics cost, insulation material, as well as new DEA material with a high dielectric constant. In order to use DEA for haptic interfaces, resonant frequency needs to be considered for the efficient delivery of tactile cues to users. For example, human indentation sense is sensitive at a low frequency around 1~10 Hz, and vibro-tactile sense is the most sensitive around 200 Hz [[10]]. So, to this purpose, we can consider a design with a specific frequency range to maximize perceived tactile sense.

More
© Text is available under the terms and conditions of the Creative Commons Attribution (CC BY) license; additional terms may apply. By using this site, you agree to the Terms and Conditions and Privacy Policy.
Upload a video for this entry
Information
Subjects: Engineering, Mechanical
Contributor MDPI registered users' name will be linked to their SciProfiles pages. To register with us, please refer to https://encyclopedia.pub/register :
Ki-Uk Kyung
View Times: 1257
Revisions: 3 times (View History)
Update Time: 01 Nov 2020
Table of Contents
1000/1000
Hot Most Recent