Submitted Successfully!
Thank you for your contribution! You can also upload a video entry related to this topic through the link below:
https://encyclopedia.pub/user/video_add?id=2846
Check Note
Maria Pia Ferraz 2021-02-25 13:14:18
As an expert in this field I review the entry and cannot find any defaults. Very good and useful.
2000/2000
Orthopedic Bioimplants
Upload a video
This entry is adapted from 10.3390/coatings10030264

Significant research and development in the field of biomedical implants has evoked the scope to treat a broad range of orthopedic ailments that include fracture fixation, total bone replacement, joint arthrodesis, dental screws, and others. The success of a bioimplant depends not only upon its bulk properties, but also on its surface properties that influence its interaction with the host tissue. Various approaches of surface modification such as coating of nanomaterial have been employed to enhance antimicrobial activities of a bioimplant. These strategies showed promising results in orthopedics, e.g., improved bone repair and regeneration. However, the choice of materials, especially considering their degradation behavior and surface properties, plays a key role in long-term reliability and performance of bioimplants. Metallic biomaterials have evolved largely in terms of their bulk and surface properties including nano-structuring with nanomaterials to meet the requirements of new generation orthopedic bioimplants.

Orthopedic bioimplants play a significant role in improving the quality of human life [1]. In this regard, bone–implant interface greatly influences bone healing through an osseointegration process [2]. The appropriate surface properties of orthopedic bioimplants include modulation of the differentiation of mesenchymal stem cells to express osteogenic phenotype [3][4]. Besides, surface modification of these bioimplants can also facilitate the biodegradation process [5][6], improve the mechanical properties commensurate with the native bone and improve integration with host tissue. The above requirements of surface modifications can be adapted by metallic materials that have inherent bulk properties to be used in orthopedic applications. Amid the reported metallic biomaterials, materials such as stainless steel (SS 316L), titanium alloy (Ti-6Al-4V) and cobalt-chromium (Co-Cr) alloy have been investigated a lot owing to their suitable bulk properties [7]. The excellent biocompatibility, hemocompatibility and high fatigue strength have positioned the metallic biomaterials as most suitable materials for orthopedic applications [8].  Surfaces of the orthopedic bioimplants serve as the site of interaction for surrounding living tissue. Hence, it is imperative to enhance the biological performance of these bioimplants using bioactive nanomaterials [9][10][11][12][13][14]. Surface engineering using nanomaterials and other suitable coating technologies aims to design and develop the bioimplants with improved osseointegration for orthopedic applications [28,33,34].

Titanium (Ti) and its alloys have the characteristics of low density, high mechanical strength and excellent biocompatibility [15]. Ti in combination with other metals forms biocompatible Ti-alloys, which are widely used in bioimplant manufacturing. One of the most commonly used Ti-alloy is Ti-6Al-4V. It occupies approximately 45% of the total industrial production of Ti-based bioimplants [16]. The Young’s modulus of Ti alloys is in the range of 55–110 GPa, which is higher than that of a native bone [17]. These concerns have led to the development of Al/V-free α + β type Ti alloys with improved mechanical, tribological, and biological properties [18]. Other new generation β-type Ti-alloy includes Ti35Nb2Ta3Zr, Ti-Nb-Ta- O, Ti-Nb-Ta-Zr, Ti-35Zr-5Fe-6Mn, and Ti-33Zr-7Fe-4Cr, which have shown their respective advantages for manufacturing of orthopedic bioimplants [19][20][21][22][23][24][25]. β type Ti-alloys are known to consist of β-stabilizing elements such as Nb, Mn, Sn, Ta, and Zr. These elements are considered as safe for human health and hence the alloys are considered as biocompatible in nature.

Stainless Steel (SS) is one of the most widely used metallic biomaterials in orthopedics because of their ease of manufacturing, low cost, and wide resource availability. SS contains a minimum of 10.5% chromium and varying amounts of other elements such as iron, carbon, etc. [26]. As a result of chromium addition, the surface of SS develops a thin and relatively passive metal oxide layer that protects the surface against corrosion. In addition, at least 0.03% carbon in stainless steel (SS 316L) increases its mechanical strength and maximizes the corrosion resistance properties and improves the overall tribological performance of the bioimplants [26].

Co alloys are wear, corrosion, and heat-resistant metallic materials used in bioimplant manufacturing [27]. In vitro and in vivo tests confirmed that these alloys as biocompatible materials for manufacturing of surgical bioimplants such as orthopedic prostheses for the knee, shoulder, and hip as well as fracture fixation devices. Typical Co-based alloy (Co-Cr-Mo alloy) in conjunction with an ultra-high molecular weight polyethylene (UHMWPE) is used in prosthetic knees and ankles [28].

A proper design of a bioimplant material is aimed to provide durability, functional stability, and an appropriate biological response. Durability and functionality depend on the bulk properties of the material, whereas biological response depends on the surface chemistry, surface topography, and surface energy of a biomaterial. Surface modifications of bioimplants play a vital role in matching the complexities of the biological system and improving the performance of the bioimplant materials [29]. In this context, nanomaterials could be effectively utilized to improve the surface properties of several orthopedic bioimplants [30][31]. Some of the examples are highlighted as below and the schematic presentations of coatings technologies are depicted in Figure 1.

Silver (Ag) possesses an inherent antibacterial property and low toxicity to human cells, rendering it as an appropriate antibacterial agent for biomedical applications [32]. Ag can be used in the form of ions and compounds to destroy the bacterial cells . Ciobanu et al. introduced a method for synthesizing Ag-doped nanocrystalline hydroxyapatite (HA) [33] in which Ag doped nanocrystals of HA was synthesized at 100 °C in deionized water. The Ag-doped nano- HA materials demonstrated an excellent cell adhesion and cell proliferation resulting in the synthesis of bone-related proteins and deposition of calcium. These hybrid nanomaterials could be used as a promising candidate for the coating and the surface modification of orthopedic bioimplants.

Titanium oxide (TiO2) nanomaterials have an excellent biocompatibility and chemical stability for which these nanomaterials have been used as coating over the metallic bioimplants [34]. In presence of light, TiO2 oxidizes to produce free radicals (e.g., hydrogen peroxide, superoxide and hydroxyl free radicals). These free radicals have already demonstrated to elicit antibacterial responses [35]. TiO2 coating on metallic bioimplants could be activated using direct organic coating like spray coating of polymers where doped antibacterial metal ions (Ag+) are released as an “antibiotic” providing antibacterial property to a bioimplant surface.

The surface modification using HA-ZnO nanocomposite can reduce ions leaching from a metal alloy and prevents the bacteria colonization over a bioimplant surface [36]. The experimental investigation suggested that the number of bacterial colonies could be reduced to 13% from 50.45% when ZnO content was increased from 1.5% to 30% (wt) in a HA-ZnO nanocomposite. The antimicrobial responses of ZnO-based composites are due to the formation of ROS and release of Zn2+ ions [37]. 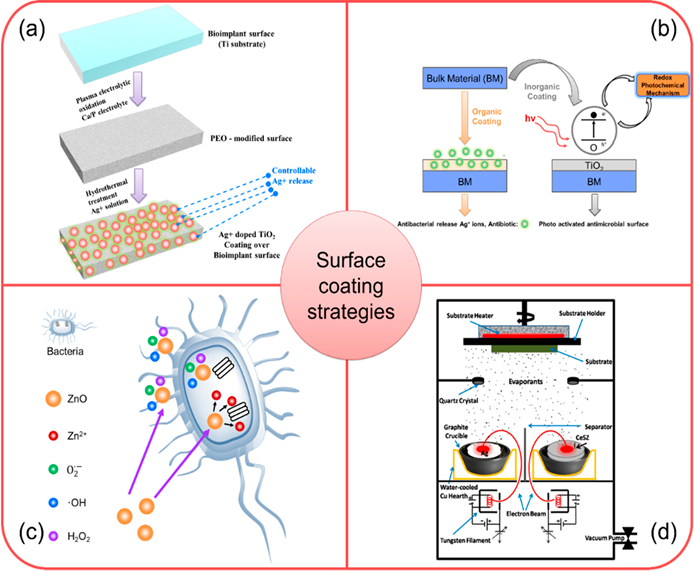 Manufacturing of bioimplants often involves the integration of processes of material selection, design, and fabrication of bioimplants, and surface modifications through micro/nano texturing or nanomaterial coating. However, the surface properties of bioimplants based on alloys/metals require appropriate modification to elicit favorable biological responses. The surface modification of bioimplants through nanocomposites materials have the potential to enhance the host response in the long-run. These nanomaterials play a key role in minimizing the bacterial adhesion to further inhibit biofilm formation to protect the implanted biomaterials from microbial attack. They also play a vital role in eliciting appropriate cellular responses like cell migration through contact guidance on patterned deposition of nanomaterials, cellular differentiation, and gene expression through modulation of stiffness/hydrophobicity of the surfaces, initiation of degree of immunogenicity, delayed surface erosion, and degradation and composition of microenvironment at or in the vicinity of the bioimplant site. In summary, it is imperative to say that the surface modification using emerging nanomaterials is going to generate a plethora of bioimplants for orthopedic applications in the near future. Therefore, the application of nanotechnology would be critical for the future success of orthopedic bioimplants.

More
© Text is available under the terms and conditions of the Creative Commons Attribution (CC BY) license; additional terms may apply. By using this site, you agree to the Terms and Conditions and Privacy Policy.
Upload a video for this entry
Information
Subjects: Materials Science, Biomaterials
Contributors MDPI registered users' name will be linked to their SciProfiles pages. To register with us, please refer to https://encyclopedia.pub/register :
Himansu Sekhar Nanda
,
Harbhajan Ahirwar
,
Yubin Zhou
,
chinmaya mahapatra
View Times: 612
Revisions: 2 times (View History)
Update Time: 31 Mar 2021
Table of Contents
1000/1000
Hot Most Recent