+1 point
Thank you for your contribution! You can also upload a video entry related to this topic through the link below: https://encyclopedia.pub/user/video_add?id=28353
Check Note
2000/2000
Nest Learning Thermostat

Edit
Upload a video
The content is sourced from: https://handwiki.org/wiki/Engineering:Nest_Learning_Thermostat

The Nest Learning Thermostat (or Nest Thermostat) is a smart thermostat developed by Nest Labs and designed by Tony Fadell, Ben Filson, and Fred Bould. It is an electronic, programmable, and self-learning Wi-Fi-enabled thermostat that optimizes heating and cooling of homes and businesses to conserve energy. The device is based on a machine learning algorithm: for the first weeks users have to regulate the thermostat in order to provide the reference data set. The thermostat can then learn people's schedule, at which temperature they are used to and when. Using built-in sensors and phones' locations, it can shift into energy saving mode when it realizes nobody is at home.

Nest is compatible with most standard HVAC systems that use central heating and cooling and uses industry standard connections to facilitate the control of these appliances.[2]

Nest is not compatible with communicating HVAC systems. Communicating systems are used with some two-stage and all variable-capacity HVAC systems. These systems require just four wires – two power wires for heating and cooling and two for communication between components (see photo). [3] 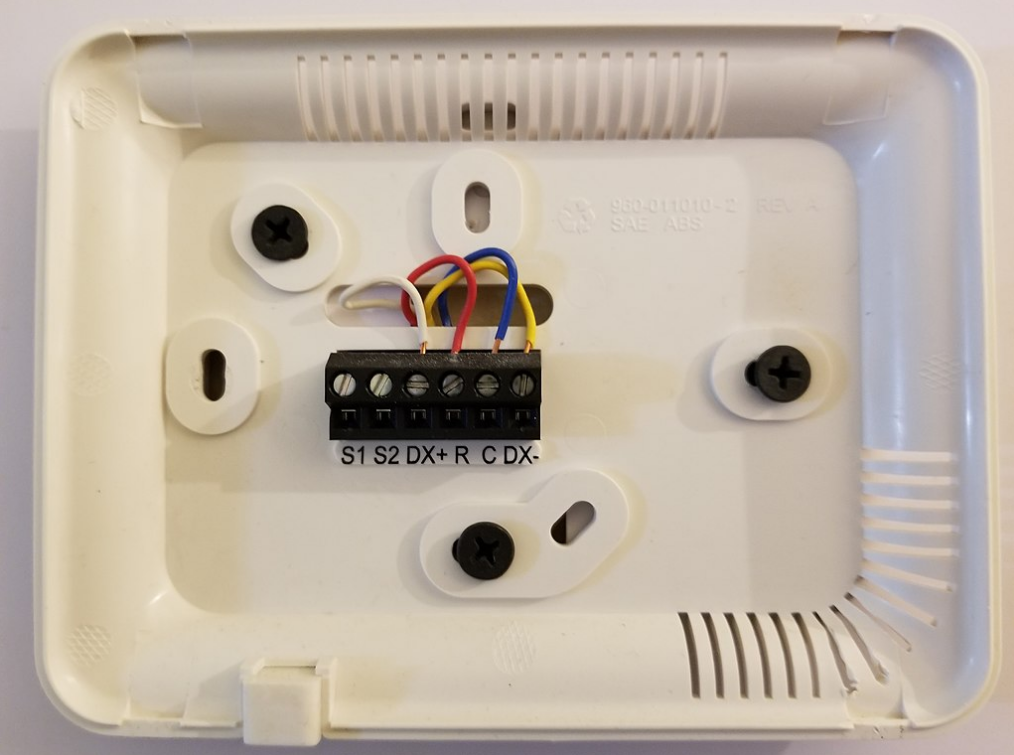 Existing thermostat wires for communicating systems. This system is not compatible with Nest. By Bree888 - Own work, CC BY-SA 4.0, https://commons.wikimedia.org/w/index.php?curid=68772534

Nest consists of two primary pieces of hardware. The display contains the main printed circuit board (PCB) and rotating ring, and the base (pictured) houses the connection terminals, bubble level, and holes for wall anchors. Neither can function independently; if separated, the display becomes inactive until reconnected to the base.[4]

A special version of Nest is available in Europe, which is capable of controlling 230 volt heating systems. The Nest is paired with a "Heat Link" device, which contains the circuitry required for controlling the mains-voltage heating system.[5] The first release was the 2nd Generation Nest thermostat which the Heat Link controlled the central heating boiler.[6] The 3rd Generation added support for OpenTherm and for controlling domestic hot water.[7] The Nest E was made available to the UK in October of 2018.[8] It has several major changes as the thermostat is stand mounted only, the Heat Link is grey and battery powered, the Heat Link loses the domestic hot water support, and lastly designed to be installed on the wall where the old thermostat was located.[9]

As the Nest Thermostat can not be battery operated, it must either be installed with a wire connecting directly to the "Heatlink" which supplies 12v DC, or mounted on a Stand and powered via a USB cable.[10]

The Nest Temperature Sensor was added in March, 2018. Available in google store only for United States and Canada[11]. Up to six of these battery operated devices can be added to a single thermostat to provide remote temperature monitoring. Nest will then use the appropriate sensor based on schedule. Since they use Bluetooth Low Energy they are only compatible with the E and 3rd generation thermostats.[12] 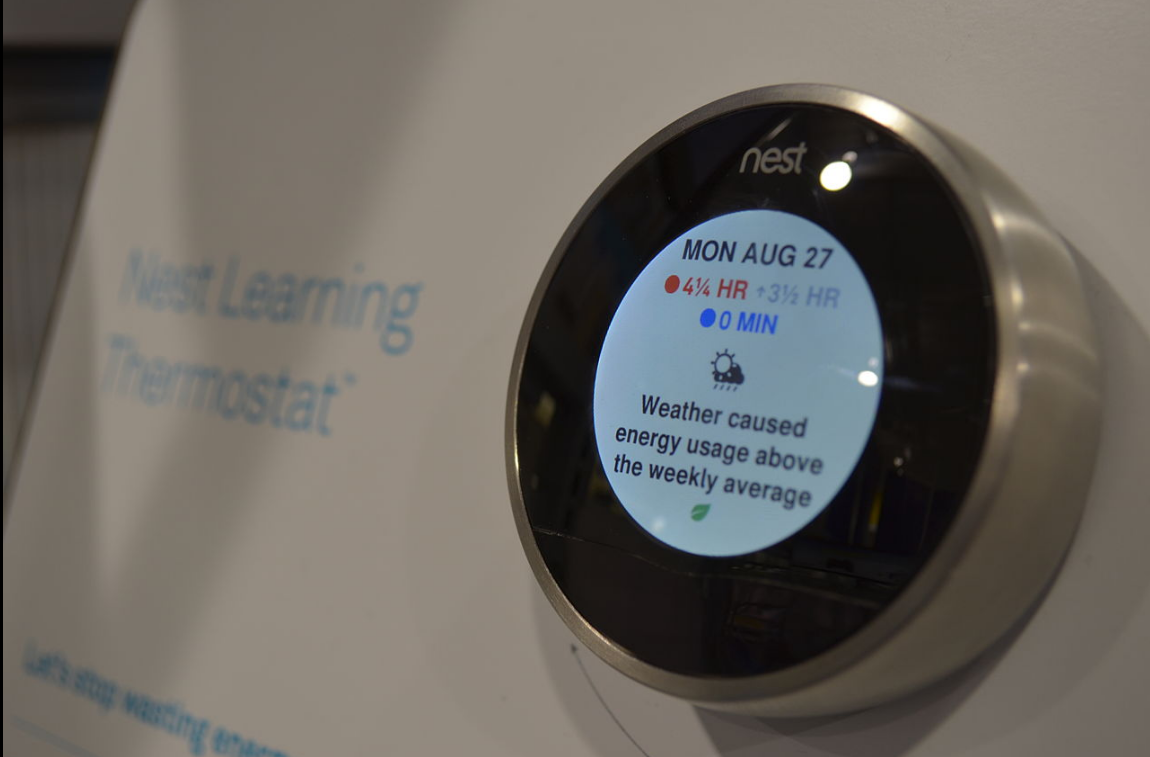 The Nest Thermostat is built around an operating system that allows interaction with the thermostat via spinning and clicking of its control wheel, which brings up option menus for switching from heating to cooling, access to device settings, energy history, and scheduling. Users can control Nest without a touch screen or other input device[13] . As the thermostat is connected to the Internet, the company can push updates to fix bugs, improve performance and add additional features. For updates to occur automatically, the thermostat must be connected to Wi‑Fi and the battery must have at least a 3.7 V charge to give enough power to complete the download and installation of the update.[14]

The Nest Thermostat has had a number of software updates.[15] A 2017 security update enables two factor authentication.[16]

Many have commented on the company's "Nest Community" regarding the lack of prominent display of the current temperature.[14]

The operating system itself is based on Linux 2.6.37 and many other free software components.[17] To comply with the terms of the GPLv3 license under which some components are available, Nest Labs also provides a special firmware image which will unlock the system so that it will accept arbitrary code sent to it.

While the thermostat software by Nest Labs itself remains proprietary, a third party has reimplemented the basic logic in an open source replacement called FreeAbode.

Nest is available for sale in the United States, Canada, Mexico, the United Kingdom, Belgium, France, Ireland, the Netherlands, Germany, Austria, Italy, and Spain.[19] It is, however, compatible with many heating and cooling automation systems in other countries.[20] Nest Labs have surveyed existing users known to be outside the areas where it is officially available. Use of the thermostat outside the United States and Canada is complicated by the software setting time and other functions based on the ZIP code. For international users this means they must either disable Wi‑Fi to set the time correctly or use the nearest U.S. zipcode which may result in erratic behavior as the thermostat makes faulty assumptions about inactivity corresponding with either sleep or the home's occupants being away.[21]

In 2013 a man-in-the-middle hack potentially allowed worldwide users to set up their time zone and local weather.[22]

In an effort to increase the number of homes using their learning thermostats, Nest began to partner with energy companies. In February 2014, Direct Energy and Nest laboratories launched their Comfort and Control plan. The plan allowed Canadian customers in Alberta to receive a learning thermostat when they signed up for a five-year electricity contract.[23] In April 2014, Nest announced a partnership with the United Kingdom energy supplier nPower. The partnership offers customers a cut on the Nest installation price and locked energy prices for 5 years, when customers receive both gas and electricity from nPower and paying with direct debit.[24]

More
©Text is available under the terms and conditions of the Creative Commons-Attribution ShareAlike (CC BY-SA) license; additional terms may apply. By using this site, you agree to the Terms and Conditions and Privacy Policy.
Upload a video for this entry
Information
Subjects: Others
Contributor MDPI registered users' name will be linked to their SciProfiles pages. To register with us, please refer to https://encyclopedia.pub/register :
HandWiki
View Times: 44
Entry Collection: HandWiki
Revisions: 3 times (View History)
Update Time: 07 Oct 2022
Table of Contents
1000/1000
Hot Most Recent