+1 point
Thank you for your contribution! You can also upload a video entry related to this topic through the link below: https://encyclopedia.pub/user/video_add?id=28351
Check Note
2000/2000
AMD Radeon Software Crimson

Edit
Upload a video
The content is sourced from: https://handwiki.org/wiki/Software:AMD_Radeon_Software_Crimson

AMD Radeon Software is targeted to support all function blocks present on a GPU's or APU's die. Besides IC targeted at rendering, this includes display controllers as well as their SIP blocks to do video decoding, Unified Video Decoder (UVD) and video encoding Video Coding Engine (VCE).

The following product lines are probably not supported by the AMD Radeon Software, but instead by some other software, which (for example) is OpenGL-certified:

Starting in Catalyst 14.6 AMD has enabled mixed resolution support, allowing for a single Eyefinity display group to be created while each monitor runs at a different resolution. This feature is made possible through the addition of two new Eyefinity display modes, Fit and Expand, which join the traditional Fill mode. In both Fit an Expand mode AMD is compensating for the mismatched resolutions by creating a virtual desktop that is of a different resolution than the monitors, and then either padding it out or cropping it as is necessary.[1]

Before Eyefinity, there was the Windows-only software "HydraVision", a desktop/screen management software mostly providing multi-monitor and virtual-screen management. It has extensive hot-key support.[2]

Both of AMD's SIP cores for video acceleration, Video Coding Engine as well as Unified Video Decoder, are supported by AMD Radeon Software.

Under Microsoft Windows the support for AMD TrueAudio is codenamed "ACP" (for audio co-processor) and implemented via "ACP user service" (amdacpusrsvc.exe), a background service that helps manage audio tasks in games.

Under Linux, AMD TrueAudio is codenamed "acp" as well, some code regarding this can be found in the /drivers/gpu/drm/radeon directory of the Linux kernel sources.

The AMD Radeon Software device driver supports multiple rendering interfaces, all designed to give the user-space programs, such as video games or CAD software, access to the correspondent SIP blocks.

OpenGL 4.5 possible for Terascale 2 and 3 with AMD Radeon Software Crimson Edition Beta (driver version 15.30 or higher like Crimson Beta 16.2.1).[5] OpenCL support will be lost, but it can be recovered by copying the relevant files from a previous package like Radeon Software 15.11.1 Beta. Beta drivers do not support HDCP.

OpenGL 4.x compliance requires supporting FP64 shaders. These are implemented by emulation on some TeraScale GPUs.

The AMD Radeon Software device driver supports multiple interfaces, all designed the give user-space programs, such as e.g. GStreamer or HandBrake software, access to the correspondent SIP blocks.

Close to Metal was a low-level API by AMD which was abandoned in favor of OpenCL.

AMD Catalyst for Linux and Mesa will use the same Linux kernel drivers: amdgpu[13] and amdkfd.[14] Mantle is not supported on Linux.
Support for ASICs such as e.g. UVD, VCE, or AMD TrueAudio will be integrated into amdgpu. By ScotXW - Own work, CC BY-SA 4.0, https://commons.wikimedia.org/w/index.php?curid=37957832 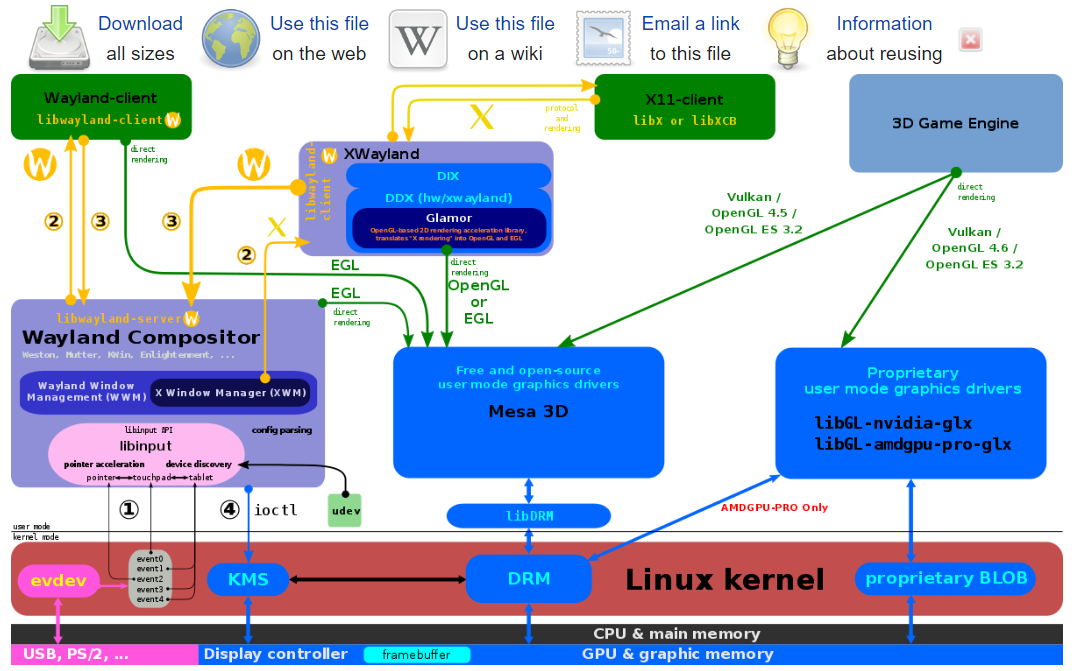 For a long time fglrx (an abbreviation for "FireGL and Radeon for X"[15]) had been the name of the proprietary graphics device driver for Linux. Starting from Catalyst 7.11, the ATI Proprietary Linux driver was renamed ATI Catalyst Linux, and was moved to the same release dates and version numbering as the versions for Microsoft Windows.[16]

In the first years of its development, the proprietary Linux driver fglrx had been criticized for its stability and performance issues as well as lack of options. AMD improved the driver in the following periods by including key features such as CrossFire, OverDrive, Catalyst AI, Stream Computing, new anti-aliasing functions, MultiView, SurroundView, etc. But the major breakthrough for fglrx was the strategic decision that AMD took in 2008, to increase the significance of Linux support: From then on all new GPUs in future are to be shipped with Linux driver support right from the first day of their release, instead of having to face a delay of several months as it used to be until then.[17] In the following years the state of the driver had continuously further improved over time, with AMD working in concert with application developers, and most instances of the drivers were considered to be solid enough for most tasks and functional for most users.[18]

Soon after its release as free and open-source software, VOGL, an OpenGL debugger available for Linux and Microsoft Windows, received support for the AMD Catalyst Linux driver.[19]

On the GDC 2014 AMD was publicly exploring the strategy of rebasing the user space components of the AMD Catalyst Linux driver from the current proprietary Linux kernel blob to the libDRM of the free and open-source radeon driver easing the use and implementation of HSA under Linux. At then X.Org Developer's Conference in October, 2014 AMD's Alex Deucher officially introduced amdgpu and amdkfd.[14]

Starting with version 4.9 (released on 4 September 2004) the Catalyst driver package included the ATI Catalyst Control Center,[31] a new software application for manipulating many hardware functions, such as 3D settings, monitor controls and video options. It shows a small 3D preview and allows the user to see how changes to the graphics settings affect the quality of the rendered image. It also shows information about the card itself and the software data. This application requires Microsoft .NET Framework.

Catalyst originated on 13 June 2002[32] with version 02.1 - after ATI Technologies released the Radeon 8500 GPU in October 2001 - as "a software suite that includes unified driver and software applications to enable [ATI's] Radeon family of graphics products" for Windows XP, Windows 2000 and Windows Me, with support for Windows 98 via the Windows Me driver. The first number in a release version denotes the year, the second the release within that year, starting at x.1 for all years other than 2003 (which had a 3.0 release).

In June 2012 AMD announced that they would stop monthly driver-updates and release new drivers "when it makes sense".[33]

The original Catalyst consisted of these elements:

In mid-2004, however, ATI started to support Linux (XFree86, X.Org), hiring a new Linux driver team to produce fglrx. Their new proprietary Linux drivers, instead of being a port of the Windows Catalyst drivers, were based on the Linux drivers for the FireGL (the FireGL drivers worked with Radeons before, but didn't officially support them), a card geared toward graphics producers, not gamers (although the display driver part is now based on the same sources as the ones from Windows Catalyst since version 4.x in late 2004). The proprietary Linux drivers could support R200 (Radeon 8500-9200, 9250) chips.[34] For a better display driver, the drivers from a distribution's official repositories are recommended.

The frequency of driver updates increased in late 2004, releasing Linux drivers every two months, half as often as their Windows counterparts. Then since late 2005 this has been increased to monthly releases, inline with the Windows Catalyst releases.

In 2008, ATI changed its release cycles and driver versions; now referred to as Catalyst <year>.<month>, the driver package still includes an internal 8.xx.x driver revision, but it is now monthly, having a common code base with the Windows driver (starting with internal release 8.43). In 2009, the Catalyst driver officially dropped support for R500 and older chips, the FOSS driver being deemed stable and complete enough. The last driver release supporting older architectures is Catalyst 9.3.

In September 2015, AMD reintroduced the driver software as Radeon Software Crimson Edition in version 15.11 with a new UI design.[35]

More
©Text is available under the terms and conditions of the Creative Commons-Attribution ShareAlike (CC BY-SA) license; additional terms may apply. By using this site, you agree to the Terms and Conditions and Privacy Policy.
Upload a video for this entry
Information
Subjects: Others
Contributor MDPI registered users' name will be linked to their SciProfiles pages. To register with us, please refer to https://encyclopedia.pub/register :
HandWiki
View Times: 90
Entry Collection: HandWiki
Revision: 1 time (View History)
Update Time: 07 Oct 2022
Table of Contents
1000/1000
Hot Most Recent