+1 point
Thank you for your contribution! You can also upload a video entry related to this topic through the link below: https://encyclopedia.pub/user/video_add?id=28311
Check Note
2000/2000
Mirroring (Psychology)

Edit
Upload a video
The content is sourced from: https://handwiki.org/wiki/Social:Mirroring_(psychology)

User:RMCD bot/subject notice Mirroring is the behavior in which one person unconsciously imitates the gesture, speech pattern, or attitude of another. Mirroring often occurs in social situations, particularly in the company of close friends or family. The concept often affects other individuals' notions about the individual that is exhibiting mirroring behaviors, which can lead to the individual building rapport with others. Mirroring is the subconscious replication of another person's nonverbal signals. This concept takes place in everyday interactions and often goes unnoticed by both the person enacting the mirroring behaviors as well as the individual who is being mirrored. The activation of mirror neurons takes place within the individual who begins to mirror another's movements and allows them a greater connection and understanding with the individual who they are mirroring, as well as allowing the individual who is being mirrored to feel a stronger connection with the other individual. Mirroring is distinct from conscious imitation under the premise that while the latter is a conscious, typically overt effort to copy another person, mirroring is unconsciously done during the act and often goes unnoticed. The display of mirroring often begins as early as infancy, as babies begin to mimic individuals around them and establish connections with particular body movements. The ability to mimic another person's actions allows the infant to establish a sense of empathy and thus begin to understand another person's emotions. The infant continues to establish connections with other individual's emotions and subsequently mirror their movements. Mirroring can establish rapport with the individual who is being mirrored, as the similarities in nonverbal gestures allow the individual to feel more connected with the person exhibiting the mirrored behavior. As the two individuals in the situation display similar nonverbal gestures, they may believe that they share similar attitudes and ideas as well. Mirror neurons react to and cause these movements, allowing the individuals to feel a greater sense of engagement and belonging within the situation. 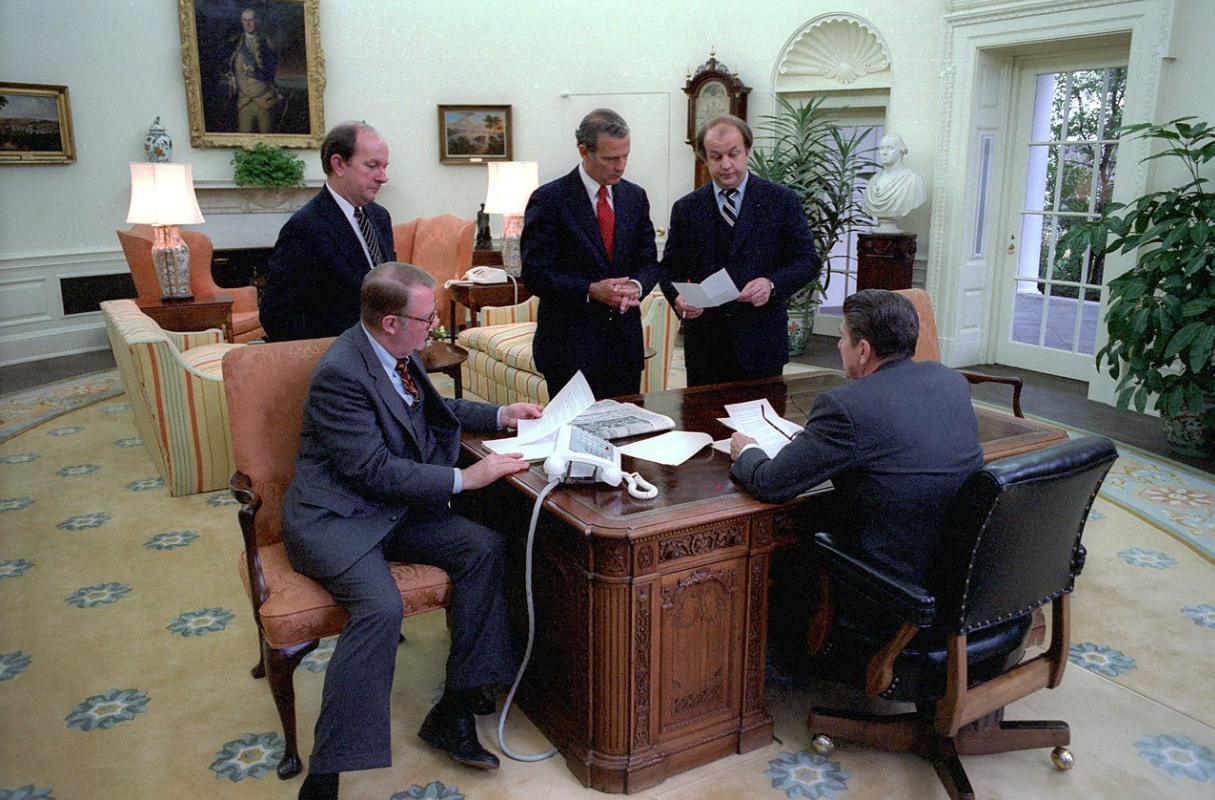 Mirroring taking place during a meeting with President Reagan

Mirroring generally takes place unconsciously as individuals react with the situation.[1] Mirroring is common in conversation, as the listeners will typically smile or frown along with the speaker, as well as imitate body posture or attitude about the topic. Individuals may be more willing to empathize with and accept people whom they believe hold similar interests and beliefs, and thus mirroring the person with whom one is speaking may establish connections between the individuals involved.

Individuals with autism or other social difficulties may be less likely to exhibit mirroring, as they may be less unconsciously and consciously aware of the actions of others.[3] This factor may cause additional difficulties for the individuals, as without mirroring, establishing connections with other people may be more difficult. Additionally, other individuals may be less likely to build rapport with the person, as without mirroring the person may seem more dissimilar and less friendly. Individuals who are not unconsciously aware of the gesture may have difficulties in social situations, as they may be less able to understand another person's perspective without it being explicitly stated, and thus may not understand covert cues that are often used in the social world. It is possible, though very rare, for some of these individuals to deliberately learn and become aware of these cues. This, however, is the exception to the rule, not the norm.

The use of noninvasive fMRI studies have shown that there is evidence of mirroring in humans similar to that found in monkeys in the inferior parietal lobe and part of the inferior frontal gyrus.[4] Humans show additional signs of mirroring in parts of the brain not observed to show mirroring properties in primates, such as the cerebellum.[5] Mirroring has also been shown to allow neurotypical children to understand what the intentions of an action are before seeing the entire sequence.[6] Because of this, a child can see someone pick up food with the intention to eat and fire all necessary motor chains needed for them to pick up their own food and go through the motions of eating it as well. It has been shown that children with autism lack this motor chain reaction and are thought to use other senses, such as visual or somatosensory, to accomplish similar tasks.[7] 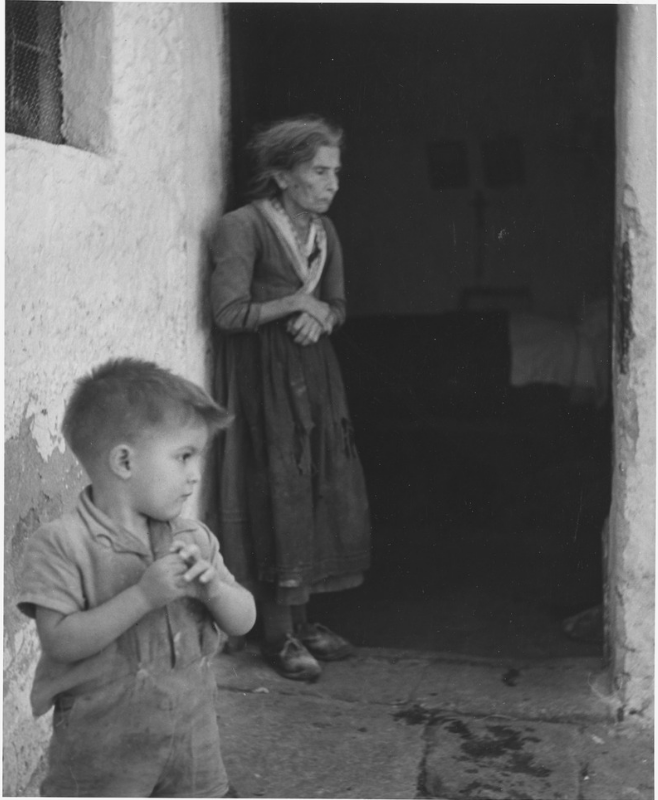 A young boy mirrors the gesture of his grandmother

In infant-parent interactions, mirroring consists of the parent imitating the infant's expressions while vocalizing the emotion implied by the expression.[8] This imitation helps the infant to associate the emotion with their expression, as well as feel validated in their own emotions as the parent shows approval through imitation. Studies have demonstrated that mirroring is an important part of child and infant development. According to Kohut's theories of self-psychology, individuals need a sense of validation and belonging in order to establish their concepts of self.[9] When parents mirror their infants, the action may help the child develop a greater sense of self-awareness and self-control, as they can see their emotions within their parent's faces. Additionally, infants may learn and experience new emotions, facial expressions, and gestures by mirroring expressions that their parents utilize. The process of mirroring may help infants establish connections of expressions to emotions and thus promote social communication later in life. Infants also learn to feel secure and valid in their own emotions through mirroring, as the parent's imitation of their emotions may help the child recognize their own thoughts and feelings more readily.

Mirroring has been shown to play a critical role in the development of an infant's notion of self.[3] The importance of mirroring suggests that infants primarily gather their social skills from their parents, and thus a household that lacks mirroring may inhibit the child's social development. Without mirroring, it may be difficult for the child to relate their emotions to socially learned expressions and thus have a difficult experience in expressing their own emotions.

The inability to properly mirror other individuals may strain the child's social relationships later in life.[10] This strain may exist because others may feel more distant from the child due to a lack of rapport, or because the child may have a difficult time feeling empathy for others without mirroring. Mirroring helps to facilitate empathy, as individuals more readily experience other people's emotions through mimicking posture and gestures. Mirroring also allows individuals to subjectively feel the pain of others when viewing injuries. [11] This empathy may help individuals create lasting relationships and thus excel in social situations. The action of mirroring allows individuals to believe they are more similar to another person, and perceived similarity can be the basis for creating a relationship. As such, mirroring values is also important.

Rapport may be an important part of social life, as establishing rapport with an individual is generally the initial route to becoming friends or acquaintances with another person.[12] Mirroring can help establish rapport, as exhibiting similar actions, attitudes, and speech patterns as another person may lead them to believe that one is more similar to them and thus more likely to be a friend. Individuals may believe that because one replicates the individual's gestures, that one may hold similar beliefs and attitudes as the individual. Mirroring may be more pervasive in close friendships or romantic relationships, as the individuals regard each other highly and thus wish to emulate or appease them. Additionally, individuals who are friends may have more similarities than two strangers, and thus may be more likely to exhibit similar body language regardless of mirroring.

More
©Text is available under the terms and conditions of the Creative Commons-Attribution ShareAlike (CC BY-SA) license; additional terms may apply. By using this site, you agree to the Terms and Conditions and Privacy Policy.
Upload a video for this entry
Information
Subjects: Others
Contributor MDPI registered users' name will be linked to their SciProfiles pages. To register with us, please refer to https://encyclopedia.pub/register :
HandWiki
View Times: 32
Entry Collection: HandWiki
Revision: 1 time (View History)
Update Time: 06 Oct 2022
Table of Contents
1000/1000
Hot Most Recent