+1 point
Thank you for your contribution! You can also upload a video entry related to this topic through the link below: https://encyclopedia.pub/user/video_add?id=28173
Check Note
2000/2000
Applications of Fucoidan from Marine Macroalgae

According to the International Union of Pure and Applied Chemistry (IUPAC) nomenclature system, fucoidan specifically designates the heterogeneous marine sulfated polysaccharides which are copiously found in the cell wall matrix of various species of brown algae. The cell walls of brown algae consist of an amorphous matrix of acid polysaccharides, such as fucoidan and alginic acid, which are linked to each other by proteins, giving structural integrity and flexibility to the seaweed. Generally, fucoidan constitutes about 5–10% of the dry algal biomass, which varies based on the species and the seasons. The fucoidan is used in regenerative medicine, drug delivery systems and the food industry.

The beneficial properties of fucoidan, such as biocompatibility, to cell attachment and proliferation, biodegradability, eco-friendliness, etc., have made fucoidan a sustainable and promising alternative to synthetic polymers in the preparation of biomaterials for different biomedical applications, comprising drug delivery, tissue engineering, wound healing, etc. (Figure 1).

Biomaterials from natural polysaccharides are widely recommended for the treatment of dermal wounds and wound dressing applications since they are non-toxic and highly biocompatible [1]. Hydrogel films are suitable for wound dressing applications as they can provide a moist environment for the wound and absorb the wound exudate, thus accelerating wound healing [2]. The hydrogels should have antibacterial action to prevent infection of the wound and facilitate wound healing.
The U. pinnatifida fucoidan can enhance and modulate the wound healing response of the skin by increasing the expression of wound healing genes for the matrix metalloproteases [3]. The fucoidan/chitosan hydrogels prepared using the fucoidan from F. vesiculosus were demonstrated to have high efficiency in the treatment of dermal burns with the best regeneration of dermal papillary structures and fastest closure of wounds when tested in adult male rabbits [1].

Algal polysaccharide-based hydrogels find extensive biomedical applications in tissue engineering and regenerative medicine as repair matrices with pre-seeded cells and bioactive growth factors. Tissue repair and regeneration, e.g., bone repair, requires the proliferation of cells, establishment of cell–cell communication and formation of new blood vessels or angiogenesis. Kim et al. [4] elucidated the mechanism behind the fucoidan-induced osteoblastic differentiation in human mesenchymal stem cells and angiogenesis. Fucoidan-induced osteoblast differentiation is concomitant with a remarkable increase in the synthesis of mRNA and a corresponding increase in the secretory expression of vascular endothelial growth factor leading to angiogenesis. Additionally, the conditioned media obtained from the fucoidan-induced mesenchymal cells also demonstrated angiogenic activities, such as increased phosphorylation of mitogen-activated protein kinase and PI3K/AKT/eNOS signaling pathway. Kim et al. [4] also demonstrated the therapeutic potential of fucoidan in osteoblast differentiation and angiogenesis in vivo in a rabbit model with calvarial bone defects, wherein fucoidan hastened the formation of new blood vessels and promoted bone formation partially. Akin to this, the fucoidan from Sargassum ilicifolium also has the potential for bone tissue engineering since it can induce alkaline phosphatase activity, bone mineralization and expression of osteoblast-specific genes in mesenchymal stem cells [5].
Hybrid biomaterials made of combinations of ceramics, hydroxyapatite and other polymers, such as fucoidan, collagen, chitin and chitosan, are more biocompatible and biodegradable. Such hybrid biomaterials can mimic the extracellular matrix and the mechanical properties of bone and are considered to provide more promising results in bone repair than individual materials [6]. In an in vivo biomimetic process, Ahn et al. [6] evaluated the bioactivity of hydroxyapatite-fucoidan nanocomposites which revealed no toxic effect on adipose-derived stem cells. Moreover, hydroxyapatite-fucoidan nanocomposites also significantly increased the expression of early and terminal stage osteogenic differentiation markers, such as collagen type-1, osteocalcin, osteopontin and runx2, and induced mineralization for bone formation. Moreover, hydroxyapatite-fucoidan nanocomposites induced bone formation in rabbit with a defective tibia, suggesting it to be a compatible biomaterial for bone tissue engineering [6].

Drug delivery systems using nanoparticles (NPs) envisage targeted therapy which is aimed at executing the pathophysiological mechanism termed enhanced permeability and retention (EPR) effect [7]. EPR is a pathophysiological mechanism employed in cancer therapy, in which the drugs conjugated with nano-sized polymeric drug carriers can progressively accumulate in the tumor vasculature and deliver and retain relatively higher drug concentrations in targeted solid tumors [8]. This improves the efficacy of anticancer compounds while reducing their side effects on non-targeted cells. Moreover, the NP carriers also improve the chemotherapeutic efficacy of the entrapped drug by modulating their pharmacokinetics and bio-distribution profile [7]. Pawar et al. [7] developed an efficient, safe and immunocompetent nanoparticle platform for the targeted delivery of doxorubicin against breast cancer by electrostatically assembling fucoidan with cationic polyethylenimine. The cytotoxicity, cell cycle arrest and apoptotic effect on tumor cells were highly enhanced in doxorubicin conjugated with fucoidan NPs in comparison to the free drug. Furthermore, the pharmacokinetics of doxorubicin entrapped in fucoidan NPs revealed preferential drug localization in tumors [7] indicating its excellent and safe use as an immunomodulating chemotherapeutic against cancer.
The anionic fucoidan can physically crosslink with cationic groups of polymers, such as collagen, gelatin, alginate and chitosan, through electrostatic interactions forming hydrogels [9][10]. The hydrogels made from fucoidan can be loaded with bioactive compounds and used as exceptional drug delivery carriers because of their porous nature, which facilitates the controlled release of drugs. Moreover, the adhesiveness of polysaccharides can increase the interaction of drugs with the cells and prolong their action, bringing about the desired pharmacological action. Fucoidan-based drug delivery systems can be made with their dimensions in the nano-scale, forming nanogels [10]. The fucoidan extracted from Turbinaria decurrens and the fucoidan-coated AgNPs showed excellent antibacterial activity against clinical pathogens, with a more pronounced action against the Gram-negative bacteria (Pseudomonas aeruginosa MTCC 2642 and Escherichia coli MTCC 40) over the Gram-positive bacteria (Streptococcus mutans MTCC 896 and Staphylococcus aureus MTCC 96) [11]. The antibacterial action of fucoidan-coated AgNPs was more prominent than the fucoidan polymer since the NPs provide a higher surface-to-volume ratio that facilitates increased interaction with the bacterial cell surface. The close interaction of fucoidan-coated AgNPs with the bacterial cell enhances the dissociation of fucoidan by the enzymatic action of the bacterial cell and releases silver ions into the bacterial cell [11]. The adhered nanoparticles can increase membrane permeability and lead to the disruption of the bacterial cell wall [12]. The hydrogel biofilms made of the biocompatible polymer poly(2-hydroxyethyl methacrylate) embedded with fucoidan were reported to have good antibacterial activity in ophthalmic application [13]. Fucoidan also finds applications in the development of NPs and hydrogels for the topical delivery of drugs in the treatment of skin-related inflammatory diseases. In contrast to the conventional topical anti-inflammatory applications, drugs encapsulated in fucoidan NPs or hydrogels present enhanced retention time and distribution of topical drugs. Barbosa et al. [14] developed fucoidan/chitosan NPs for the enhanced skin permeation of the anti-inflammatory drug methotrexate. The methotrexate-loaded fucoidan/chitosan NPs were biocompatible with fibroblasts and keratinocytes and significantly inhibited pro-inflammatory cytokines, such as IL 1-β, IL-6 and tumor necrosis factor-α.
The presence of acidic and basic functional groups In the polymeric structure confers pH-sensitivity to fucoidan that can elicit a response to changes in external pH and makes it applicable in pH-responsive drug delivery systems. Coutinho et al. [9] developed mucoadhesive and pH-responsive fucoidan/chitosan NPs for the oral delivery of methotrexate in lung cancer therapy. The pH-responsive fucoidan/chitosan NPs loaded with methotrexate were resistant to challenges, such as pH and gastric degradation. The mucoadhesive property of fucoidan/chitosan NPs enhances the oral bioavailability of the drug. Methotrexate-loaded fucoidan/chitosan NPs are biocompatible to fibroblasts while mediating apoptosis in lung cancer cells [9]. In another study, self-assembled zein-fucoidan complex NPs were developed as a delivery system for the controlled release of resveratrol, a health-promoting dietary polyphenol, and were demonstrated to have low cytotoxicity to normal human intestinal epithelial cell line-6 cells [15].

2. Food and Feed Applications of Fucoidan

About 85% of the global macroalgal production comprises food products for human consumption [16]. Until now, only two macroalgal products are authorized by the European Union as novel foods for use in food and food supplements: the fucoidan extracts from F. vesiculosus and U. pinnatifida; and the phlorotannins extracted from the brown alga E. cava [16]. However, fucoidans are also found in edible species, such as L. japonica and C. okamuranus [17].
Fucoidan has a positive impact on the growth performance and productivity of animals. The effect of fucoidan on animal health is through modulating the gut environment for the growth of beneficial gut microflora, stimulating the innate immune system and reducing the risk of diarrhea [17]. The commercially marketed algal products TascoTM from A. nodosum and Ocean FeedTM (a blend of brown, green and red macroalgae) are used as animal feed additives to improve the performance and immune response [17][18].

Biodegradable polymers, being environmentally friendly, are attractive alternatives to plastics to be used as food packaging materials. In addition to eco-friendliness, chemical safety is of paramount importance when developing food contact materials, to prevent the migration of hazardous chemicals to foods from the packaging materials [19]. Macroalgae containing 25–60% of the dry biomass weight accounted for by polysaccharides are gaining increased interest as bioplastics for food packaging materials. In Germany, macroalgae are developed into edible carton-like packaging materials [16].
Active packaging films are an innovative approach to food packaging and preservation that is gaining interest due to their optical, structural, thermal, antioxidant and antimicrobial properties [20][21]. According to European regulation (EC) No 450/2009, active materials and articles mean materials and articles that are intended to extend the shelf-life or to maintain or improve the condition of packaged food; they are designed to deliberately incorporate components that would release or absorb substances into or from the packaged food or the environment surrounding the food. Two types of active packaging systems are in practice: active scavenging systems or absorbers that remove undesirable substances, such as moisture, carbon dioxide, oxygen, ethylene or odor molecules from the packed food or its surroundings; and active releasing systems or emitters that release favorable compounds, such as antimicrobial compounds, antioxidants, flavor, ethylene or carbon dioxide, to the packed food or headspace to extend shelf life and enhance the safety and sensory characteristics without loss of product quality [22]. Doh et al. [23] manufactured seaweed nanocomposite biopolymer films reinforced with cellulose nanocrystals using the brown seaweeds kombu (L. japonica) and sargassum (Sargassum natans). The seaweed biopolymer film had improved physical properties (Figure 2), such as thickness, moisture content and water solubility. The barrier properties to water, oxygen and light were reinforced in the biopolymer films and the thermal properties were also enhanced. The antioxidant properties of the seaweed biopolymer film were also improved, with the kombu film having higher antioxidant properties than the sargassum film. An activated biodegradable polylactic acid (PLA) film containing 8% lyophilised alga Fucus spiralis and 1% sorbic acid was developed for the preservation of fish megrim Lepidorhombus whiffiagonis under refrigeration [24]. The samples wrapped in activated PLA films maintained sensory quality and were still acceptable on day 11, whereas the fish specimens wrapped in polyethylene films were not acceptable by that time. 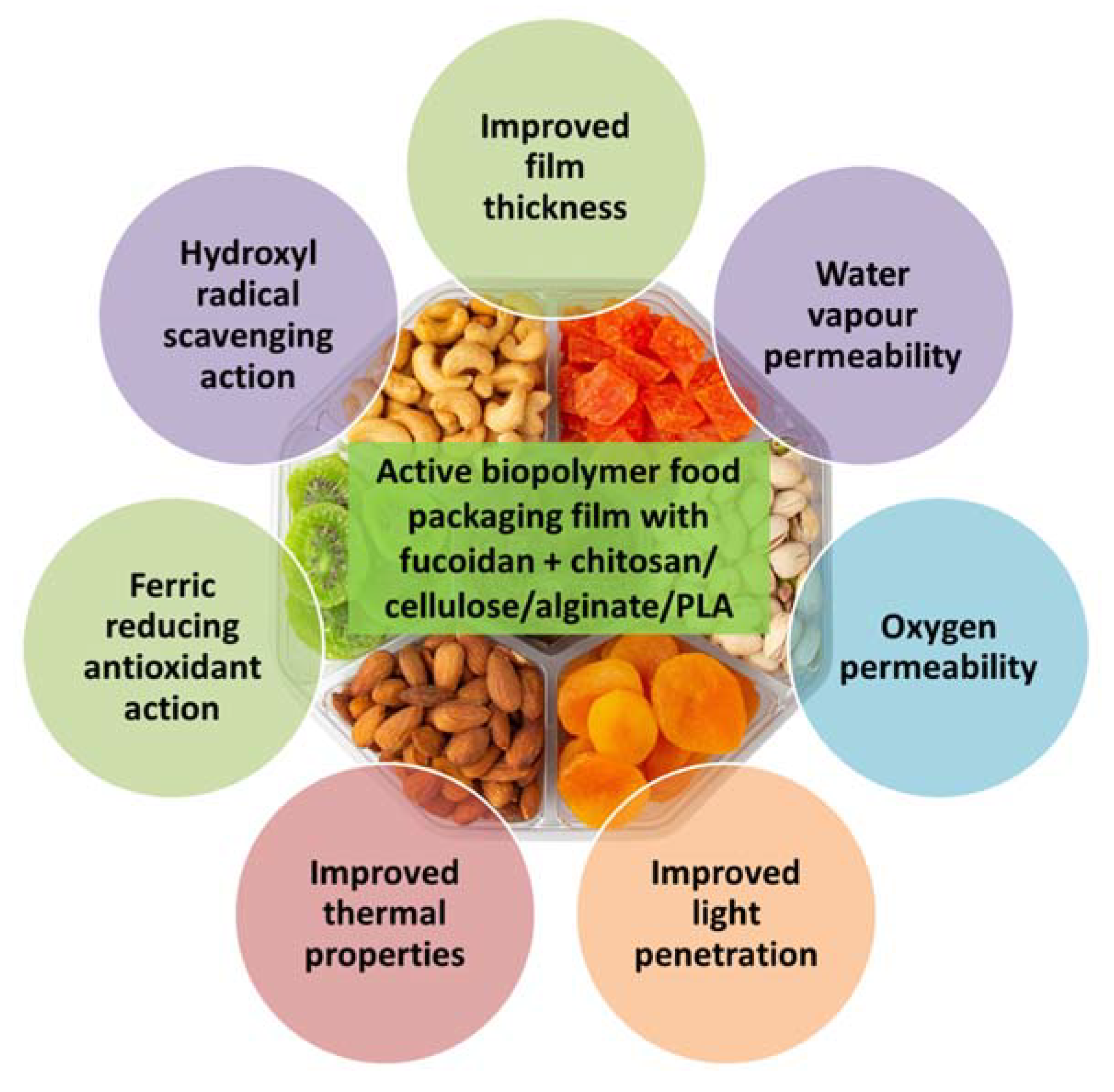 Figure 2. Beneficial properties of active biopolymer food packaging films prepared from fucoidan blended with other polymers, such as chitosan, cellulose, alginate or polylactic acid.
Edible packaging films made of edible ingredients are increasing in demand because of their safety of consumption and ease of use [21]. Edible films with natural antioxidant properties were developed by Gomaa et al. [25] using alginate and fucoidan extracted from the brown macroalga Sargassum latifolium and chitosan derived from the fungus Aspergillus niger. The water vapor permeability, oxygen permeability and film thickness were increased by the incorporation of fucoidan and/or Ca2+ into the alginate-chitosan edible films, which also showed good barrier properties against ultraviolet light. Fucoidan blending also decreased the water solubility of the film and improved the film moisture content at equilibrium. The alginate-chitosan-fucoidan blended edible films also showed good antioxidant properties with ferric reducing antioxidant power and hydroxyl radical scavenging activity.