Submitted Successfully!
Thank you for your contribution! You can also upload a video entry related to this topic through the link below:
https://encyclopedia.pub/user/video_add?id=2806
Check Note
2000/2000
Oxidative Stress in CKD
Edit
Upload a video
This entry is adapted from 10.3390/antiox9100925 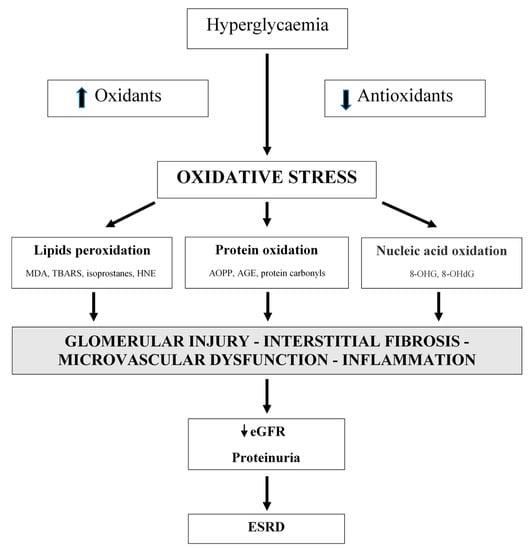 Podocytes are vulnerable to oxidative damage [13]. Mature podocytes are highly differentiated cells and respond to injury with detachment from the glomerular basement membrane, dedifferentiation, autophagy, and apoptosis [17]. An important consequence of podocyte injury is proteinuria, which is a well-known marker of kidney damage and is associated with CKD progression [17][18]. Proteinuria is an important factor in inducing mesangial and tubular toxicity and is involved in local and systemic inflammatory pathways [18][19].

In early studies, it was shown that puromycin aminonucleoside, a podocyte toxin, induced glomerular injury in rats through ROS [13][20][21]. In these studies, antioxidants also provided protection against the changes in podocytes [21]. Later, ROS-mediated DNA damage was also shown [22]. Podocyte injury and dysfunctional glomerular filtration barrier is important in the process of focal segmental glomerular sclerosis (FSGS). The development and progression of FSGS is associated with transforming growth factor beta (TGF-β) activation in podocytes [23]. TGF-β is involved in crosstalk between podocytes and the glomerular endothelium [24]. TGF-β promotes synthesis of endothelin precursors in podocytes and expression of endothelin receptors. The binding of endothelin with its receptors suppresses mitochondrial function and induces oxidative stress in the glomerular endothelium [24]. Mitochondrial oxidative DNA damage was evident before podocyte injury [24].

Other oxidative stress markers are advanced oxidation protein products (AOPPs). They are dityrosine-containing products of plasma proteins [13]. Higher AOPP levels were found in patients with CKD compared to controls [25][26]. Podocyte injury, proteinuria, and glomerulosclerosis were associated with AOPPs through a NOX-dependent mechanism [27]. In normal rats, chronic administration of AOPPs increased proteinuria and urinary 8-hydroxydeoxyguanosine (8-OHdG) excretion. On the other hand, chronic inhibition of NOX by apocynin prevented podocyte apoptosis and decreased proteinuria in these rats [27]. AOPPs interacted with the receptor of advanced glycation end products (RAGE) on podocytes [28]. Additionally, blocking RAGE by anti-RAGE immunoglobulin G or its silencing by siRNA significantly protected podocytes from AOPP-induced apoptosis and ameliorated proteinuria in AOPP-challenged mice [28]. AOPPs are involved in the activation of Wnt/β-catenin signalling. Wnts are a family of secretory proteins that induce a series of signals which results in the phosphorylation of β-catenin [29]. After activation, β-catenin enters the nucleus and promotes the transcription of Wnt target genes [29]. Wnt/β-catenin signalling is silent in normal adults. AOPPs induce NOX activation via plasma membrane receptor RAGE, which promotes the activation of the nuclear factor kappa B (NF-κB) transcription factor. The NF-κB transcription factor leads to the induction of Wnt ligands, such as Wnt1 and Wnt7a, and the activation of β-catenin [30]. Accumulating evidence suggests that Wnt/β-catenin has an important role in oxidative stress-induced podocyte damage and proteinuria [30]. Recently, it was demonstrated that a blockade of Wnt signalling preserves podocyte integrity and ameliorates proteinuria [30]. According to the mentioned data, targeting Wnt/β-catenin could be a new therapeutic modality for proteinuric CKD [30].

Additionally, oxidative stress is also associated with progressive renal failure. Finnish-type congenital nephrotic syndrome (NPHS1) is a rare genetic kidney disease caused by mutations in the NPHS1 gene, which codes for the podocyte protein nephrin [32]. The disease is characterised by heavy proteinuria and hypoproteinaemia from birth [32]. In nephrectomised kidneys from children with NPHS1, interstitial expression of MPO was demonstrated [32]. This enzyme generates hypoclorous acid (HOCl), which causes irreversible tissue damage [32]. The concentration of free GSH in the cortex of the NPHS1 kidneys, which is a major antioxidant, was extremely low as compared to controls [32]. All these findings support the fact that proteinuric kidneys are under heavy oxidative stress.

In proteinuric CKD, tubulointerstitial injury with subsequent progressive loss of renal function is common. During urinary albumin endocytosis in the proximal tubule, protein kinase C-dependent NOX-mediated ROS generation is induced and this is responsible for enhanced NF-κB activity and the induction of NF-κB-dependent pathways of interstitial inflammation [33][34].

Less is known about the role of antioxidants in proteinuric CKD. Enzyme superoxide dismutase (SOD) protects the kidney from superoxide. Downregulation of cytosolic CuZn-SOD (SOD1) and extracellular CuZn-SOD (SOD3), but not mitochondrial Mn-SOD (SOD2), was observed in the kidney of KK/Ta-Akita mice that exhibit progressive DN [35]. In this study, no change in renal SOD expression in DN-resistant C57BL/6-Akita mice was observed [35]. In another study, a murine model of adriamycin-induced nephropathy was used. Levels of SOD3 diminished throughout the course of disease progression [36]. Interestingly, similar to findings in mice, a decrease in SOD3 in human CKD biopsy samples was found [36]. The authors concluded that SOD3 protects against proteinuric renal injury in vivo. It offers protection through the inhibition of NOX upregulation and downregulation of pathologic β-catenin signalling [36].

Disregarding the initial injury, renal fibrosis is the common final pathway leading to ESRD, and the degree of fibrosis or fibroblast number are robust pathologic markers of progression [37]. Tubulointerstitial fibrosis includes the deposition of interstitial matrix with inflammatory cells, tubular cell loss, fibroblast accumulation, and rarefaction of the peritubular microvasculature [37]. Renal scarring is a result of complex interactions of molecular pathways, growth factors, cytokines, and cells [38][39][40][41].

Fibroblasts/myofibroblasts are most responsible for interstitial matrix accumulation and subsequent structural changes [42]. Collagen-producing myofibroblasts in the kidney can be derived from resident fibroblasts, pericytes, perivascular adventitial, epithelial, and/or endothelial sources [42]. Regardless of the origin of the cells, TGF-β1 is the main molecule responsible for myofibroblast activation with the expression of α-smooth muscle actin (α-SMA), which gives the myofibroblasts their contractility [42][43][44]. TGF-β1 increases the activity of NOX and expression of NOX2 and NOX4, homologues of the NOX family, indicating that this growth factor induces the production of ROS [44]. NOX2 and NOX4 have an important role in the conversion of fibroblasts to myofibroblasts [42][44]. It was shown that inhibition of NOX4 inhibited TGF-β-induced stimulation of NOX activity and reduced α-SMA expression [44]. Additionally, inhibition of TGF-β receptor type I reduced TGF-β-enhanced NOX activity and decreased expression of NOX4 and α-SMA [44].

As was shown, NOX synthesises ROS that are involved in fibrosis progression. On the other hand, their effect on renal disease progression is not well understood. In the model of chronic renal injury due to unilateral urinary obstruction, leading to renal fibrosis, wild-type and NOX4-deficient mice were used [45]. In the NOX4-deficient mice, more interstitial fibrosis was found in the obstructed kidney compared to the wild-type mice [45]. More TGF-β1-mediated tubular apoptosis, reduced expression of hypoxia-inducible factor-1α, and vascular endothelial growth factor was also found in the obstructed kidneys of the NOX4-deficient mice [45]. It was shown that the absence of NOX4 increases interstitial kidney fibrosis, independent of NOX2. [45]. NOX4 deficiency increased fibrosis due to enhanced tubular cell apoptosis, decreased microvascularisation, and enhanced oxidative stress [45]. The NOX4-mediated protection might be a consequence of Nrf2 pathway upregulation [46]. The Nrf2/Keap1 system controls the expression of antioxidant genes [46]. Furthermore, Nrf2 plays a protective role in CKD animal models, including DN [47][48].

Uraemic toxins are also involved in the progression of CKD. In the last decade, indoxyl sulphate (IS) and p-cresyl sulphate (PCS), which accumulate with CKD progression, have appeared as key nephrotoxins [49][50]. IS and PCS enhance ROS production in renal tubular cells, which activate the NF-kB pathway, resulting in both oxidative stress and inflammation [50][51]. These mechanisms have been confirmed in studies showing that fibrosis of renal tubules and oxidative stress are significantly enhanced after toxin administration and suppressed after IS reduction [50][51][52]. Additionally, it was shown that antioxidant treatment dose-dependently inhibits the fibrotic and oxidative effects of IS and PCS [53][54].

Recently, it was demonstrated that oxidative stress and autophagy are involved in kidney health and disease [55]. Autophagy is a crucial cellular homeostatic process that cells use to degrade and recycle cellular proteins and remove damaged organelles. It involves the formation of double membrane-bound vesicles called autophagosomes, which later fuse with lysosomes [56]. Basal levels of redox signalling and autophagy signalling are necessary to maintain cellular homeostasis. Under distinct circumstances, changes in autophagic flux have been shown to regulate ROS formation and redox signalling [55]. It is also suggested that ROS and RNS induce autophagy and vice versa [55][57].

The endothelium is a fundamental layer in the arterial wall and is essential for the regulation and maintenance of normal renal function [13][14]. Oxidative stress is related to endothelial dysfunction and plays a critical role in CKD progression [14][15][58]. The endothelium secretes nitric oxide (NO), which is produced from arginine by the enzyme NOS [58]. NO is involved in several biological processes, including vasodilatation in smooth muscle cells, inflammation, and immune responses [58]. NOS is expressed as various isoforms: endothelial NOS (eNOS), neuronal NOS (nNOS), inducible NOS (iNOS), and constitutive NOS (cNOS); all have been isolated from the kidney [13][58][59]. The cNOS is expressed in the vessels, glomeruli, and tubules, iNOS is expressed in vascular smooth muscle cells and the mesangium, and eNOS is associated with the vascular endothelium [15][58][60]. Low levels of NO in the endothelium induce the expression of antioxidative genes and protect renal endothelial and mesangial cells from apoptosis and fibrosis but, on the other hand, increased levels of ROS reduce the production of NO via inhibition and/or uncoupling of NOS enzymes [15][58][59][60]. The NO production in the kidney can be blocked by NOS inhibition with asymmetric dimethylarginine (ADMA). ADMA is a natural product formed by the methylation of arginine which accumulates in the plasma of CKD patients in the early stages of CKD [15][59]. The decrease in NO leads to an increase in vascular resistance [59]. Additionally, it was shown in patients with CKD stages 1-5 that levels of serum ADMA and oxidative stress markers (plasma malondialdehyde (MDA), erythrocyte SOD, and GSH-Px) were directly associated with CKD stages [15]. It was shown that the glomerular filtration rate correlated negatively with plasma MDA and ADMA levels and positively with erythrocyte SOD and GSH-Px [15]. Patients with CKD, compared to a control group of healthy subjects, had higher levels of MDA and ADMA and lower levels of erythrocyte SOD and GSH-Px [15]. Furthermore, it was shown that levels of oxidative stress markers and ADMA are independently associated with endothelial function [15].

Oxidative stress and inflammation, as well as their interaction, have an important role in the pathogenesis and progression of CKD [67]. Both promote renal injury through damage of molecular components [68]. The primary pathological mechanism that links oxidative stress, inflammation, and CKD progression includes an initial injury to the kidney by intra- and extracellular oxygen-derived radicals and the resultant inflammation [68]. In recent years, some important review papers have been published showing the importance of inflammation in the pathogenesis and progression of CKD [3][7][69][13][70][71][72][73][74].

More
© Text is available under the terms and conditions of the Creative Commons Attribution (CC BY) license; additional terms may apply. By using this site, you agree to the Terms and Conditions and Privacy Policy.
Upload a video for this entry
Information
Subjects: Others
Contributor MDPI registered users' name will be linked to their SciProfiles pages. To register with us, please refer to https://encyclopedia.pub/register :
Radovan Hojs
View Times: 168
Revisions: 3 times (View History)
Update Time: 06 Nov 2020
Table of Contents
1000/1000
Hot Most Recent