+1 point
Thank you for your contribution! You can also upload a video entry related to this topic through the link below: https://encyclopedia.pub/user/video_add?id=27964
Check Note
2000/2000
X 2000

Edit
Upload a video
The content is sourced from: https://handwiki.org/wiki/Engineering:X_2000

X 2000, also called SJ X2 or simply as X2, is a tilting train operated by SJ in Sweden. It was constructed by Kalmar Verkstad in Kalmar, Sweden (prior to the company being bought by Adtranz in 1996) and launched in 1990 as a first-class only train with a meal included in the ticket price, and free use of the train's fax machine. There is a bistro on board that serves snack bar-style dishes. From 1995 second class was introduced. All trains are equipped with Wi-Fi for passenger access to the Internet and were repainted grey as of 2005. The trains also have electric power supply sockets at all seats in both first and second class. The trains have been fitted with repeaters to improve mobile phone reception. It has a top commercial speed of 200 km/h (120 mph), but has reached 276 km/h (171 mph) in a test. The reason the X2 was chosen was that Sweden (like most other countries) has very curved railways, and not enough traffic to justify building special high-speed railway lines (at least before 1990). As a result, a Swedish tilting train had to be developed. A tilting train provided the advantages of high speed and comfort for the passengers, as tilting trains can run through sharp (short radius or tight) curves up to 15% faster than non-tilting trains. The X2 was designed and built by ASEA (later ABB Asea Brown Boveri, Adtranz ABB Daimler Benz Transportation and now Bombardier Transportation). SJ ordered 20 trainsets in August 1986 and planned to order further 30 trainsets. However, this figure was later reduced to only 43 trainsets.

"X 2000" was originally a brand name for a number of train connections with a certain service level. Generally the X2 train is used, but because of lack of vehicles, sometimes (especially in 2009/2010) other train types have been used, like X40 or Rc loco-hauled stock. Since December 2011, all high speed services of SJ using X2 or X55 trains are called SJ Snabbtåg (lit. "SJ High-speed train").

The train's designated top speed is 210 km/h (130 mph). It reached 276 km/h (171 mph) during a trial run with double locomotive units in 1993. The maximum speed allowed in regular traffic is 200 km/h (120 mph) for safety reasons – the signalling system (and systems like the catenary) are not built for higher speeds, and it shares the track with regular trains (like in most countries); also, most of the lines it uses were built in the mid-to-late-19th century. The 19th century railways Stockholm–Gothenburg/Malmö are relatively straight, since they were planned the shortest way without taking intermediate cities into account, and the landscape is relatively flat. Other 19th-century railways are generally curvier.

In comparison to other high-speed trains, the X 2000 is not particularly fast; but compared to regular train services, it cuts journey time by about 10-15% – enough to make it competitive with airlines on many routes. It typically averages about 150 km/h (93 mph). The fastest part is Katrineholm–Skövde, a distance of 180 km (110 mi) that is covered in 1h 2min, resulting in an average speed of 174.2 km/h (108.2 mph). However the introduction of the new Stadler FLIRT X74 trains in 2015 for MTR Express, which competes with the X 2000 on the busy Stockholm–Gothenburg route, means that the X 2000 now has at most only a 9% theoretical speed advantage compared to the X74, making it unlikely for any new tilting trains to be introduced in Sweden in the future.[1]

In 2008 SJ ordered 20 X55 Bombardier Regina trains to replace the X 2000 on lines with lower demand and where its performance cannot be fully utilised (especially on lines north of Stockholm such as the Botniabanan). When these trains were delivered in 2012 and 2013 the X 2000 trains could be concentrated to fewer lines with bigger demands such as Stockholm–Malmö/Copenhagen and Stockholm–Gothenburg, using double-length X 2000 between Stockholm and Gothenburg during rush hours and weekends.

4. Impact on the Railway 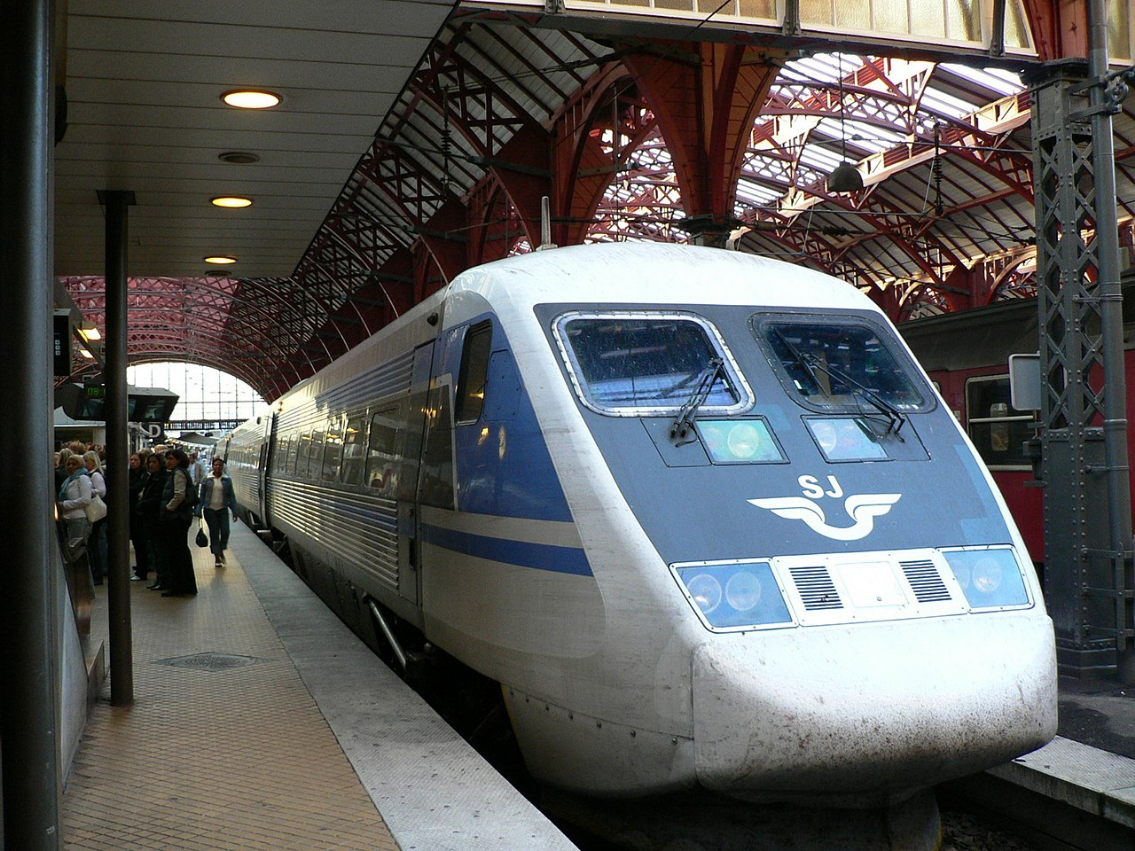 An X 2000 in original livery used for a direct connection between Stockholm, Sweden, and Copenhagen, Denmark, across the Øresund Bridge. Picture taken at Copenhagen Central Station, in September 2005. By yisris from Japan - X2000, CC BY-SA 2.0, https://commons.wikimedia.org/w/index.php?curid=2247485

The train has had a major effect on SJ and the country's railway. More passengers, together with the lower operating costs associated with operating trains faster and more efficiently, helped SJ become profitable.

It also proved to Swedes that rail is a viable solution not just in exotic densely populated foreign countries, but also at home in Sweden. In 1991, the Swedish government started a massive investment program, spending 5-10 billion kronor annually on improvements to the rail network. The program continues today. A milestone was reached in the late-1990s when the number of trips taken by train in Sweden exceeded the 1940s level for the first time.

New links built since 1990 include the Øresund Bridge, the Arlanda Airport link, Södertälje–Huddinge, Söderhamn–Enånger, Varberg–Kungsbacka and Helsingborg–Lund. The X 2000 train contributed to building public support for these large projects.

The fast-growing popularity of the trains has created problems with capacity. The time taken for the X 2000 trains were longer in 2008 than in 2000. For Stockholm–Malmö the fastest train took 21 minutes longer in 2008 compared to 2000. It is the congestion on the railways that impedes the fast trains, especially the prioritised fastest connections. The railways are used by fast X 2000 trains, slower passenger trains, and much slower freight trains. 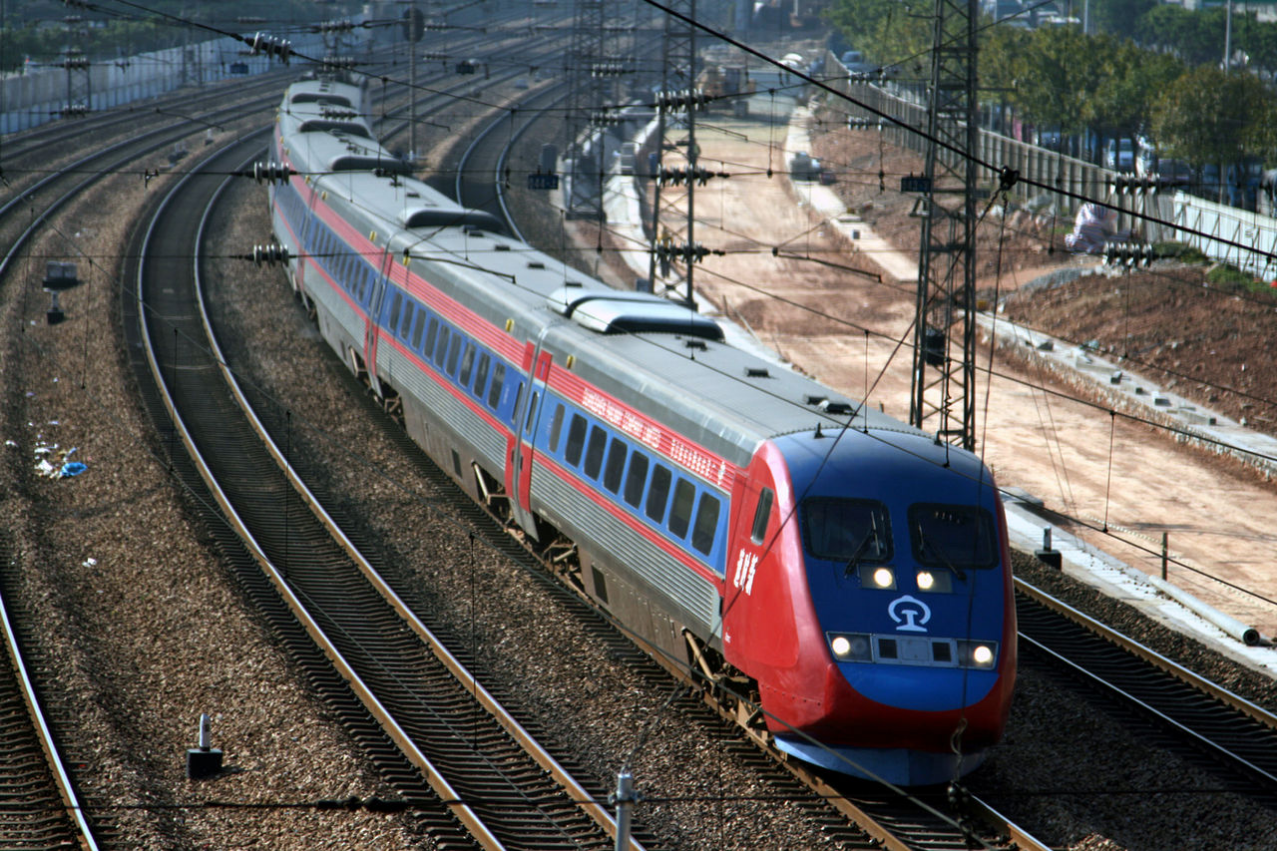 The manufacturer of the X 2000 had tried to sell the train to countries other than Sweden, but with mixed success. In connection with the sales attempts the train was tested and demonstrated in some countries. Norway, Finland, Germany, Austria, France, China, Australia, Portugal and the US were mentioned as candidates.

An X 2000 toured the United States in 1992–1993 on lease to Amtrak. It was tested by Amtrak from October 1992 until January 1993. It was used in revenue service on the Northeast Corridor between New York City and Washington, D.C. for about five months, from February until May and from August until September 1993. From May until July it was taken on a national tour around the 48 continental states for demonstration stops at significant stations. It also toured parts of Canada.[2]

In 1995, three X 2000 cars were hired by Australian operator CountryLink for evaluation purposes, being one driving trailer, one bistro car and one first class car. The trains were towed in a push/pull mode by modified XPT power cars XP2000 and XP2009. After conducting a statewide tour of New South Wales in March 1995, they were used on Sydney to Canberra services from April to June 1995.[3][4] An X2 train was also loaned to the American rail operator Amtrak in 1992-93 and to the Australian State Rail Authority of New South Wales for its CountryLink services in 1995 for evaluation, but neither operator bought any X2 trains.[5] The X2 was also tested in Norway and Germany. There were competitors which had lower price, including Pendolino and ICE T.

China did purchase a X 2000 train which it named "Xinshisu" (New Speed). The train served as Guangzhou-Kowloon Through Train on the Guangshen Railway from 1998 until 2007. The train was initially supposed to been given the number 2044, but due to the fact that the number "4" sounds the same as the word for "death" in the Chinese language, it was renumbered as 2088, of which the number "8" symbolises luck in Chinese culture.[6] It was delivered to Sichuan Province in August 2007 when it was replaced by an CRH1A. Due to the 2008 Sichuan earthquake, Chengdu Railway Bureau needed to rebuild the railway networks in Sichuan Province. Also, the authority could not carry the maintenance costs of the train. It was therefore returned to Guangshen Railway Company in late December 2008. In 2012 the train was purchased by SJ and shipped back to Sweden.[7][8] The train had some serious damage and deferred maintenance. The trailer cab (110986 CUB2XFK) were scrapped after being display at the Swedish Railway Museum. The power car (2088 CX2) and five of the trailer cars (110987 through 110991 CUBS2FK) were repaired and re-entered service in 2020[9]

The X2 was designed for old main lines with tight curves and with continuously welded rails (the train has a maximum axle load of 17 tonnes (16.7 long tons; 18.7 short tons), which causes large forces on the track). However, since 1990 a lot of new high speed lines have been constructed in Sweden, both upgraded lines and new lines. These upgraded or new lines always have ATC, continuously welded rails on concrete sleepers and no crossings with road and rail at the same level. The tilting function is not used on these lines.

The X2 trains have mostly run at the X 2000 service level, but have periodically been used for Linx traffic (from 2000–2004) as well as regional services, for which fewer coaches were used to improve acceleration.

In the beginning there were many more UA2 first class coaches than UB2 second class coaches. But after a decision that state employees should normally use second class for train journeys in their works instead of first class something many companies followed, many UA2 have been rebuilt into UB2.

More
©Text is available under the terms and conditions of the Creative Commons-Attribution ShareAlike (CC BY-SA) license; additional terms may apply. By using this site, you agree to the Terms and Conditions and Privacy Policy.
Upload a video for this entry
Information
Subjects: Transportation
Contributor MDPI registered users' name will be linked to their SciProfiles pages. To register with us, please refer to https://encyclopedia.pub/register :
HandWiki
View Times: 131
Entry Collection: HandWiki
Revision: 1 time (View History)
Update Date: 29 Sep 2022
Table of Contents
1000/1000
Hot Most Recent