Submitted Successfully!
Thank you for your contribution! You can also upload a video entry related to this topic through the link below:
https://encyclopedia.pub/user/video_add?id=2796
Check Note
2000/2000
Microgrids in Harbor
Edit

Energy efficiency and low-carbon energy systems are increasingly taken into account in seaports, due to climate change challenges and the evolution of environmental regulations. Thus, technological breakthroughs must be brought to numerous systems in harbors, such as harbor cranes, seaport vehicles, or the power supply of berthed vessels. These aspects may require the establishment of a microgrid in the harbor area. Microgrids have been subjected to a wide development on the mainland and islands, mostly for domestic loads. However, these are still scarce in harbor areas. Their development in such places faces several challenges, such as high power requirements, monitoring and management of a wide range of loads, energy policy framework, etc. Moreover, the establishment of a microgrid involves a study of sizing and of energy management, to avoid prohibitive costs and to verify load requirements.

Maritime transport plays a key role in international exchanges, as it is estimated that 90% of the volume of goods traded worldwide transit by the sea [1]. However, most vessels use fossils fuels for their energetic needs, leading to the emission of pollutant gases, particulate matter and greenhouse gases (GHG) [1][2]. Thus, some environmental issues arise [3] along with health problems [4][5]. To reduce the air pollution and follow international environmental regulations, in 2011 the International Maritime Organization set a target for the reduction by 50% of GHG to be emitted by vessels in 2050 [6], despite increases in the transport of goods and passengers by this same date. To reach the environmental goals, several major changes must be brought to the maritime transport sector, both for the vessels and for the harbors. Since the 2000s, several alternative fuels have been considered for vessels, such as liquefied natural gas (LNG), methanol and hydrogen [7]. Moreover, all-electric ships appeared recently, with the launch of the first fully electric car ferry in Norway in 2015 [8][9]. In this kind of vessel, electrical energy can be generated by renewable sources and the use of storage systems is often considered, such as batteries [8][9], supercapacitors [10][11], and hydrogen [8]. To limit the use of fossil fuels as much as possible, the electrical supply of berthed vessels provided by the onshore grid is increasingly considered, and details of this can be found in the literature under the terms of cold-ironing [9], shore-side electricity supply [12] or shore-to-ship power [13]. The supply of electricity to vessels at berth avoids the use of diesel generators in vessels. However, it faces technical challenges such as the high power and voltage requirements of vessels and the diversity of vessels that can arrive at a harbor [13]. This involves an obligation to take into account the compatibility between a vessel and onshore grids. To reduce the carbon footprint of vessels cold-ironing and avoid the use of electricity generated by fossil fuels in the main grid, the use of renewable energy sources such as solar panels and wind turbines, and storage solutions, have been increasingly taken into account in seaports [14][15].

To manage all these elements, the development of microgrids in harbor areas has been increasingly taken into account over the last decade [15][16]. A microgrid consists of the connection of different elements (sources, storage solutions, and loads) at a local scale, and their management to ensure that the load demand can be met at all times. Indeed, the power generation from renewable energy sources is non-dispatchable and can present severe fluctuations, according to different time scales [17]. Although microgrids have been widely developed worldwide in different kinds of territories (cities, remote communities, islands, etc.) [18], they remain scarce in harbor areas. This can be explained by the diversity of loads in a seaport (reefer containers, quay cranes, vessel cold-ironing, buildings, etc.). This diversity can involve challenges related to energy management, difficult load forecasting ability, and power requirements of several megawatts [16]. In addition, the development of microgrids involves heavy investments due to the use of storage solutions and renewable energies, leading to questions of investment cost sharing between authorities, port owners, etc. [13], and the management of the microgrid from business and energy points of view [16][19][20].

Thus, the development of microgrids in harbors seems to be a challenging task due to the diversity and complexity of the elements to be considered. It cannot be done without a rigorous study of the energy management system, and an optimization of sizing to avoid prohibitive costs. Several articles published in recent years deal with some systems that can be found in a harbor, such as shore connection (also named ‘cold-ironing’) [12][13], the vessel’s electrical power system itself [8][9], the quay cranes [21], etc., by studying their control, sizing, and sometimes integration into a microgrid. Few reviews exist in the field of energy efficiency actions in harbors [14][15][22][23]. However, no study has proposed a review of the sizing, and energy management at the harbor microgrid scale, as their full-scale development is still limited worldwide. The sizing and energy management can be a challenging task as many criteria have to be considered, such as pollution, costs, and reliability. These criteria can be conflicting, which requires an optimization to meet the requirements as much as possible. Thus, it is necessary to know which facilities and criteria have to be considered before the development of a harbor microgrid project, which appears to lack in the literature.

The development of microgrids in harbor areas (Figure 1) has been increasingly considered in recent years, in both academic and industrial studies. This is due to the necessary adaptation of harbors to meet recent environmental and technical regulations, such as the reduction of environmental pollution (diminution of the operation of the vessels’ engines at berth) and evolution of the load demand (all-electric ships for example). It was highlighted that a wide diversity of possible elements for harbor microgrid: renewable energy sources (solar photovoltaic panels and wind turbines), storage solutions, energy harvesting from cranes, power supplies for cold-ironing, harbor loads (reefer containers, cranes, warehouses, lighting, etc.). As the electricity generation from some local sources (renewable energy sources and cranes in hoisting mode) is non-dispatchable, storage solutions must be integrated into the microgrid to allow the energy generated to be consumed later by harbor loads. Thus, an adapted energy management system must be implemented to allow the load demand of harbor facilities to be met at all times. In addition to the reliability aspects, the review presented here showed that pollution and operating costs are often taken into account in energy management strategies. Also, some harbor loads can be integrated in a DSM program to bring a degree of freedom to the management of the microgrid. Moreover, the sizing of sources and storage solutions must be optimized to minimize the investment costs and environmental pollution. However, some constraints must be considered for design and sizing, such as the available area, grid topology, power limits, etc.

Some industrial developments are generated in several harbors worldwide, but most only consider a few facilities: implementation of onshore power supplies for cold-ironing, installation of solar photovoltaic panels, use of a storage solution to harvest regenerative energy of cranes, etc. The development of microgrids in harbor areas remains rare due to many factors: high investment costs, complex energy management involving many stakeholders, difficulty to assess and forecast the load demand (load diversity, many kinds of vessels, stochastic nature, etc.), the need of an adapted energy policy, etc. These weaknesses offer several research perspectives in the coming years, so the development of microgrids in harbor areas should be fostered. The research perspectives include: management of the wide diversity of loads in a DSM program, investment and operating costs limitation, operating strategies at the scale of the harbor (for example, demand scheduling according to the availability of sources and storage), the management of multiple vessels cold-ironing, etc.

On the other hand, some solutions can already be implemented in forthcoming years thanks to the maturity of several systems and the projects developed worldwide. For example, solar photovoltaic panels can be installed on the roofs of seaport warehouses and buildings. Also, some manufacturers also commercialize cranes with an integrated storage solution, such as flywheels, allowing the harvested energy during the lifting down of the container to be used [27][28][29]. Thus, the integration of renewable energy sources and electrified quay cranes to the harbor grid seems to be relevant in the forthcoming years due to their current maturity level, before the integration of shore-to-ship power supplies and DSM programmes. A smart energy management system must be implemented, and the ISO 50001 certification could be considered [30]. This certification involves a careful study of the energetic needs of the seaport, so as to correctly size the renewable energy sources and the storage solutions, allowing the objectives to be met. Several performance indicators can be considered: self-consumption rate, energy saving, etc. Moreover, an evaluation of the future needs must be done and the results must be considered in the action plan to determine strategic decisions. 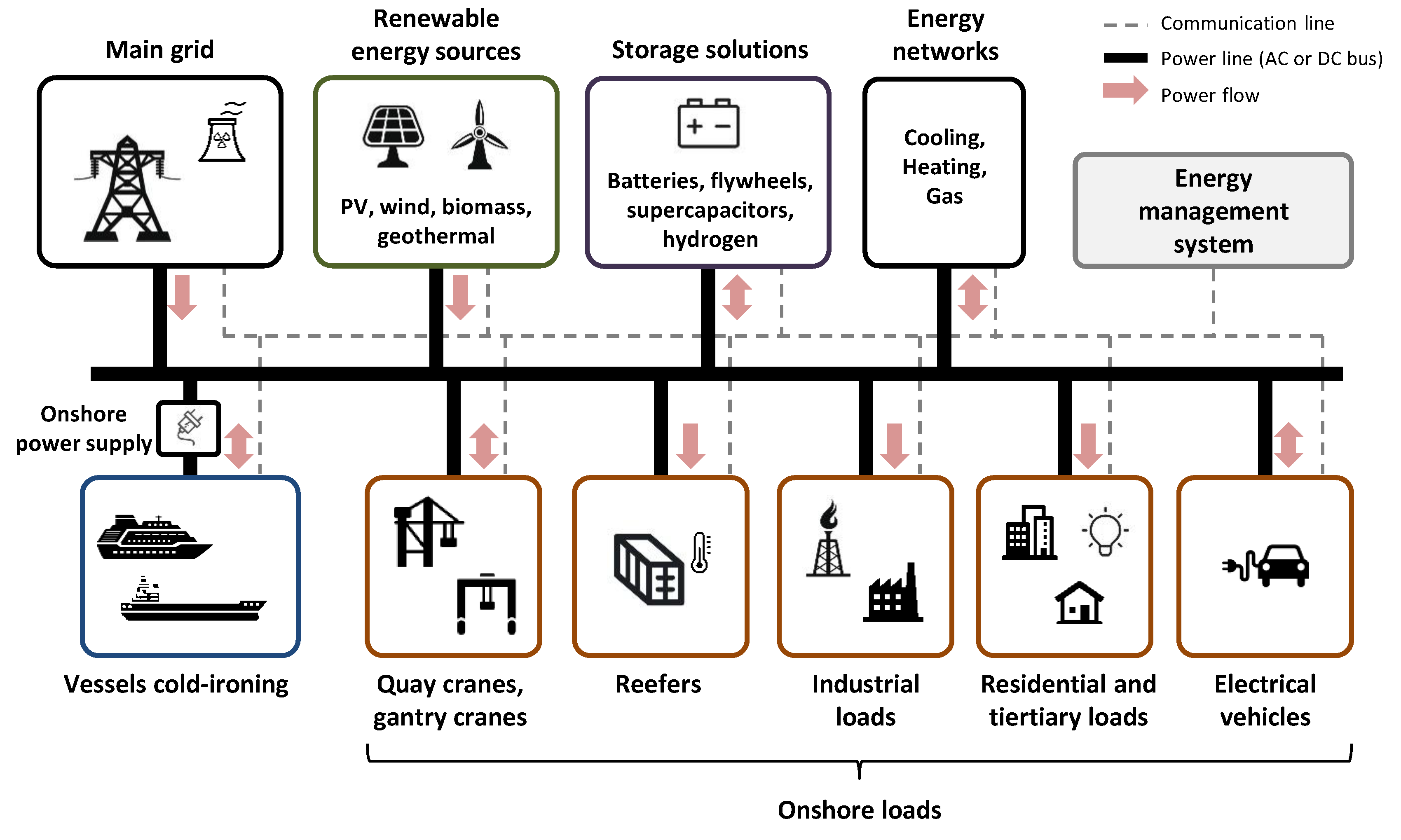