+1 point
Thank you for your contribution! You can also upload a video entry related to this topic through the link below: https://encyclopedia.pub/user/video_add?id=27824
Check Note
2000/2000
Relative Humidity

Edit
Upload a video
The content is sourced from: https://handwiki.org/wiki/Physics:Relative_humidity

Relative humidity is normally expressed as a percentage; a higher percentage means that the air–water mixture is more humid. At 100% relative humidity, the air is saturated and is at its dew point.

Climate control refers to the control of temperature and relative humidity in buildings, vehicles and other enclosed spaces for the purpose of providing for human comfort, health and safety, and of meeting environmental requirements of machines, sensitive materials (for example, historic) and technical processes.

When using the adaptive model to predict thermal comfort indoors, relative humidity is not taken into account.[4]

In cold climates, the outdoor temperature causes lower capacity for water vapor to flow about. Although it may be snowing and the relative humidity outdoors is high, once that air comes into a building and heats up, its new relative humidity is very low (meaning the air is very dry), which can cause discomfort. Dry cracked skin can result from dry air.

Low humidity causes tissue lining nasal passages to dry, crack and become more susceptible to penetration of Rhinovirus cold viruses.[10] Low humidity is a common cause of nosebleeds. The use of a humidifier in homes, especially bedrooms, can help with these symptoms.[11]

Indoor relative humidities should be kept above 30% to reduce the likelihood of the occupant's nasal passages drying out.[12][13]

Humans can be comfortable within a wide range of humidities depending on the temperature—from 30–70%[14]—but ideally between 50 %[15] and 60 %.[16] Very low humidity can create discomfort, respiratory problems, and aggravate allergies in some individuals. In the winter, it is advisable to maintain relative humidity at 30% or above.[17] Extremely low (below 20 %) relative humidities may also cause eye irritation.[12][18]

For climate control in buildings using HVAC systems, the key is to maintain the relative humidity at a comfortable range—low enough to be comfortable but high enough to avoid problems associated with very dry air.

When the temperature is high and the relative humidity is low, evaporation of water is rapid; soil dries, wet clothes hung on a line or rack dry quickly, and perspiration readily evaporates from the skin. Wooden furniture can shrink, causing the paint that covers these surfaces to fracture.

When the temperature is low and the relative humidity is high, evaporation of water is slow. When relative humidity approaches 100 %, condensation can occur on surfaces, leading to problems with mold, corrosion, decay, and other moisture-related deterioration. Condensation can pose a safety risk as it can promote the growth of mold and wood rot as well as possibly freezing emergency exits shut.

The basic principles for buildings, above, also apply to vehicles. In addition, there may be safety considerations. For instance, high humidity inside a vehicle can lead to problems of condensation, such as misting of windshields and shorting of electrical components. In vehicles and pressure vessels such as pressurized airliners, submersibles and spacecraft, these considerations may be critical to safety, and complex environmental control systems including equipment to maintain pressure are needed.

Airliners operate with low internal relative humidity, often under 20 %[19], especially on long flights. The low humidity is a consequence of drawing in the very cold air with a low absolute humidity, which is found at airliner cruising altitudes. Subsequent warming of this air lowers its relative humidity. This causes discomfort such as sore eyes, dry skin, and drying out of mucosa, but humidifiers are not employed to raise it to comfortable mid-range levels because the volume of water required to be carried on board can be a significant weight penalty. As airliners descend from colder altitudes into warmer air (perhaps even flying through clouds a few thousand feet above the ground), the ambient relative humidity can increase dramatically. Some of this moist air is usually drawn into the pressurized aircraft cabin and into other non-pressurized areas of the aircraft and condenses on the cold aircraft skin. Liquid water can usually be seen running along the aircraft skin, both on the inside and outside of the cabin. Because of the drastic changes in relative humidity inside the vehicle, components must be qualified to operate in those environments. The recommended environmental qualifications for most commercial aircraft components is listed in RTCA DO-160.

Cold, humid air can promote the formation of ice, which is a danger to aircraft as it affects the wing profile and increases weight. Carburetor engines have a further danger of ice forming inside the carburetor. Aviation weather reports (METARs) therefore include an indication of relative humidity, usually in the form of the dew point.

Density altitude is the altitude relative to the standard atmosphere conditions (International Standard Atmosphere) at which the air density would be equal to the indicated air density at the place of observation, or, in other words, the height when measured in terms of the density of the air rather than the distance from the ground. "Density Altitude" is the pressure altitude adjusted for non-standard temperature.

A hygrometer is a device used for measuring the humidity of air.

There are several empirical formulas that can be used to estimate the equilibrium vapor pressure of water vapor as a function of temperature. The Antoine equation is among the least complex of these, having only three parameters (A, B, and C). Other formulas, such as the Goff–Gratch equation and the Magnus–Tetens approximation, are more complicated but yield better accuracy.

The Arden Buck equation[20] is commonly encountered in the literature regarding this topic:

4. Water Vapor Is Independent of Air

The notion of air "holding" water vapor or being "saturated" by it is often mentioned in connection with the concept of relative humidity. This, however, is misleading—the amount of water vapor that enters (or can enter) a given space at a given temperature is almost independent of the amount of air (nitrogen, oxygen, etc.) that is present. Indeed, a vacuum has approximately the same equilibrium capacity to hold water vapor as the same volume filled with air; both are given by the equilibrium vapor pressure of water at the given temperature.[1][21] There is a very small difference described under "Enhancement factor" below, which can be neglected in many calculations unless high accuracy is required. 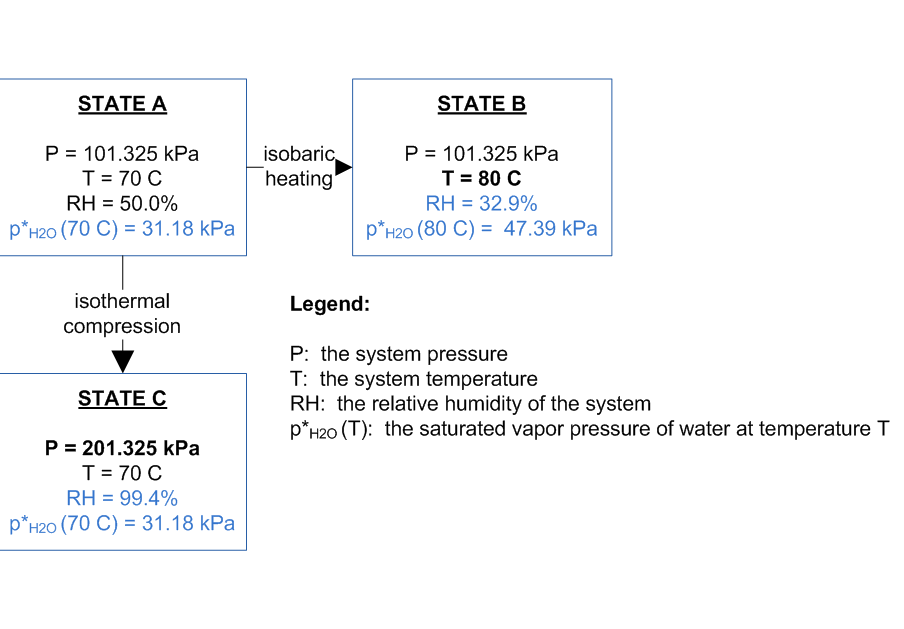 If the system at State A is isobarically heated (heating with no change in system pressure), then the relative humidity of the system decreases because the equilibrium vapor pressure of water increases with increasing temperature. This is shown in State B.

If the pressure of State A was changed by simply adding more dry air, without changing the volume, the relative humidity would not change.

The enhancement factor is equal to unity for ideal gas systems. However, in real systems the interaction effects between gas molecules result in a small increase of the equilibrium vapor pressure of water in air relative to equilibrium vapor pressure of pure water vapor. Therefore, the enhancement factor is normally slightly greater than unity for real systems.

The enhancement factor is commonly used to correct the equilibrium vapor pressure of water vapor when empirical relationships, such as those developed by Wexler, Goff, and Gratch, are used to estimate the properties of psychrometric systems. 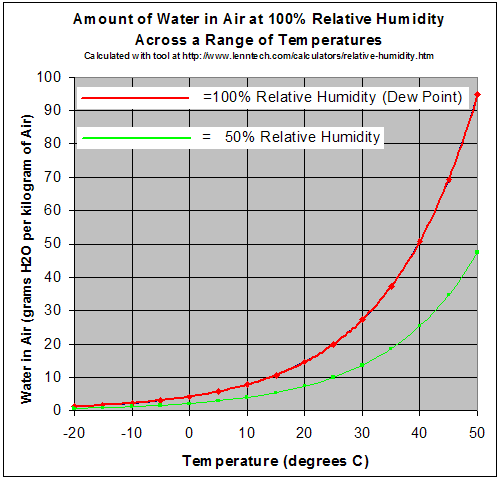 A gas in this context is referred to as saturated when the vapor pressure of water in the air is at the equilibrium vapor pressure for water vapor at the temperature of the gas and water vapor mixture; liquid water (and ice, at the appropriate temperature) will fail to lose mass through evaporation when exposed to saturated air. It may also correspond to the possibility of dew or fog forming, within a space that lacks temperature differences among its portions, for instance in response to decreasing temperature. Fog consists of very minute droplets of liquid, primarily held aloft by isostatic motion (in other words, the droplets fall through the air at terminal velocity, but as they are very small, this terminal velocity is very small too, so it doesn't look to us like they are falling, and they seem to be held aloft).

The statement that relative humidity (RH %) can never be above 100 %, while a fairly good guide, is not absolutely accurate, without a more sophisticated definition of humidity than the one given here. Cloud formation, in which aerosol particles are activated to form cloud condensation nuclei, requires the supersaturation of an air parcel to a relative humidity of slightly above 100 %. One smaller-scale example is found in the Wilson cloud chamber in nuclear physics experiments, in which a state of supersaturation is induced to accomplish its function.

For a given dew point and its corresponding absolute humidity, the relative humidity will change inversely, albeit nonlinearly, with the temperature. This is because the partial pressure of water increases with temperature—the operative principle behind everything from hair dryers to dehumidifiers.

Due to the increasing potential for a higher water vapor partial pressure at higher air temperatures, the water content of air at sea level can get as high as 3% by mass at 30 °C (86 °F) compared to no more than about 0.5% by mass at 0 °C (32 °F). This explains the low levels (in the absence of measures to add moisture) of humidity in heated structures during winter, resulting in dry skin, itchy eyes, and persistence of static electric charges. Even with saturation (100% relative humidity) outdoors, heating of infiltrated outside air that comes indoors raises its moisture capacity, which lowers relative humidity and increases evaporation rates from moist surfaces indoors (including human bodies and household plants.)

Similarly, during summer in humid climates a great deal of liquid water condenses from air cooled in air conditioners. Warmer air is cooled below its dew point, and the excess water vapor condenses. This phenomenon is the same as that which causes water droplets to form on the outside of a cup containing an ice-cold drink.

Water vapor is a lighter gas than other gaseous components of air at the same temperature, so humid air will tend to rise by natural convection. This is a mechanism behind thunderstorms and other weather phenomena. Relative humidity is often mentioned in weather forecasts and reports, as it is an indicator of the likelihood of precipitation, dew, or fog. In hot summer weather, it also increases the apparent temperature to humans (and other animals) by hindering the evaporation of perspiration from the skin as the relative humidity rises. This effect is calculated as the heat index or humidex.

A device used to measure humidity is called a hygrometer; one used to regulate it is called a humidistat, or sometimes hygrostat. (These are analogous to a thermometer and thermostat for temperature, respectively.)

More
©Text is available under the terms and conditions of the Creative Commons-Attribution ShareAlike (CC BY-SA) license; additional terms may apply. By using this site, you agree to the Terms and Conditions and Privacy Policy.
Upload a video for this entry
Information
Subjects: Meteorology & Atmospheric Sciences
Contributor MDPI registered users' name will be linked to their SciProfiles pages. To register with us, please refer to https://encyclopedia.pub/register :
HandWiki
View Times: 294
Entry Collection: HandWiki
Revisions: 2 times (View History)
Update Time: 29 Sep 2022
Table of Contents
1000/1000
Hot Most Recent