+1 point
Thank you for your contribution! You can also upload a video entry related to this topic through the link below: https://encyclopedia.pub/user/video_add?id=27775
Check Note
2000/2000
Google Street View

Edit
Upload a video
The content is sourced from: https://handwiki.org/wiki/Software:Google_Street_View

Google Street View is a technology featured in Google Maps and Google Earth that provides interactive panoramas from positions along many streets in the world. It was launched in 2007 in several cities in the United States, and has since expanded to include cities and rural areas worldwide. Streets with Street View imagery available are shown as blue lines on Google Maps. Google Street View displays interactively panoramas of stitched VR photographs. Most photography is done by car, but some is done by tricycle, camel, boat, snowmobile, underwater apparatus, and on foot. 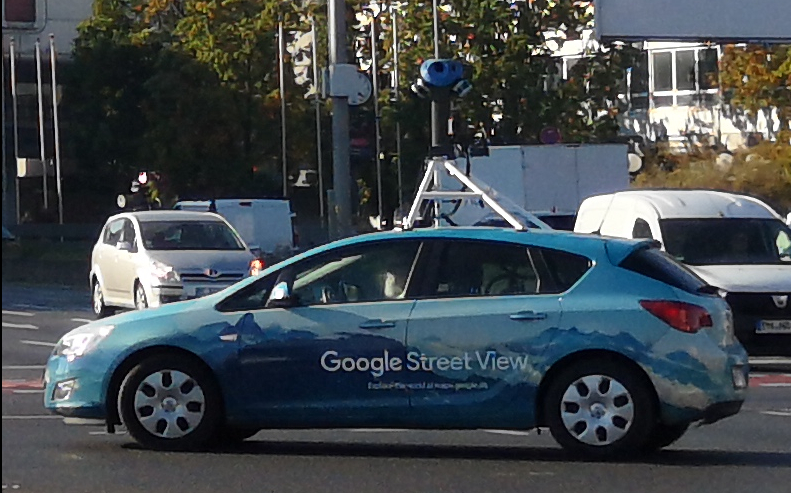 Street View had its inception in 2001 with the Stanford CityBlock Project, a Google-sponsored Stanford University research project. The project ended in June 2006, and its technology was folded into StreetView.[1]

The drag-and-drop Pegman icon is the primary user interface element used by Google to connect Maps to Street View. Its name comes from its resemblance to a clothespeg. When not in use, Pegman sits atop the Google Maps zoom controls. Occasionally Pegman "dresses up" for special events or is joined by peg friends in Google Maps. When dragged into Street View near Area 51, he becomes a flying saucer, and when dragged near the Florida Keys, he becomes a mermaid. When viewing older views, the Pegman in the minimap changes to Doc Brown from Back to the Future.[27]

Google announced in May 2017 that it had captured more than 10 million miles (16 million kilometres) of Street View imagery across 83 countries.[28][29] Maps also include panoramic views taken underwater such as in West Nusa Tenggara underwater coral, in the Grand Canyon, inside museums, and Liwa Desert in United Arab Emirates, which is viewed from camelback.[30] In a ten-day trek with Apa Sherpa, Google documented Khumbu, Nepal with its Mount Everest, Sherpa communities, monasteries and schools.[31]

Google also added landmarks in Egypt, including the Pyramids of Giza, Cairo Citadel, Saqqara, Monastery of Saint Mina, and the Citadel of Qaitbay in the 9 September 2014 release.

Many places still have limited or no coverage, including:

While these countries do not have it, borderwise, some of them accidentally do have tiny bits that came from a bordering country. 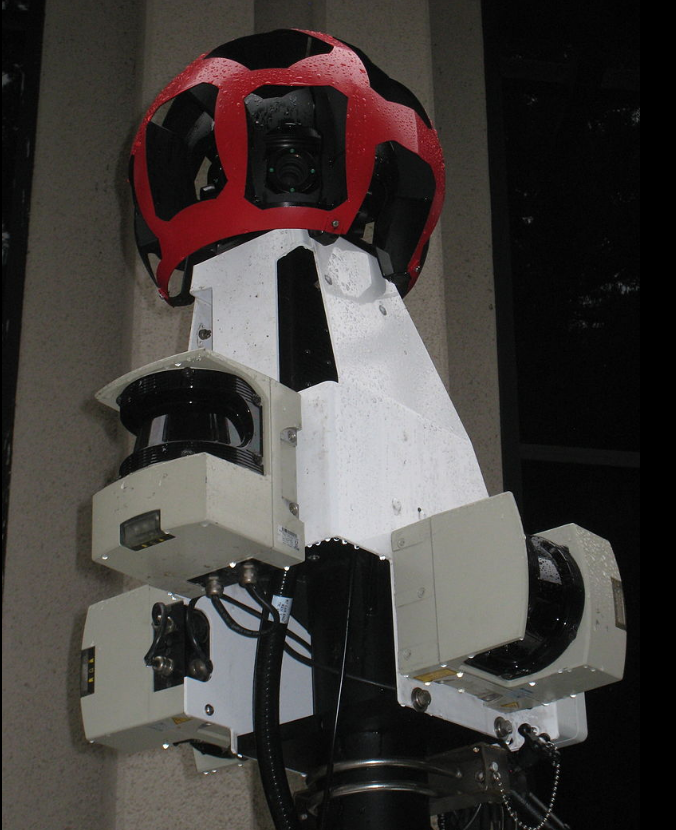 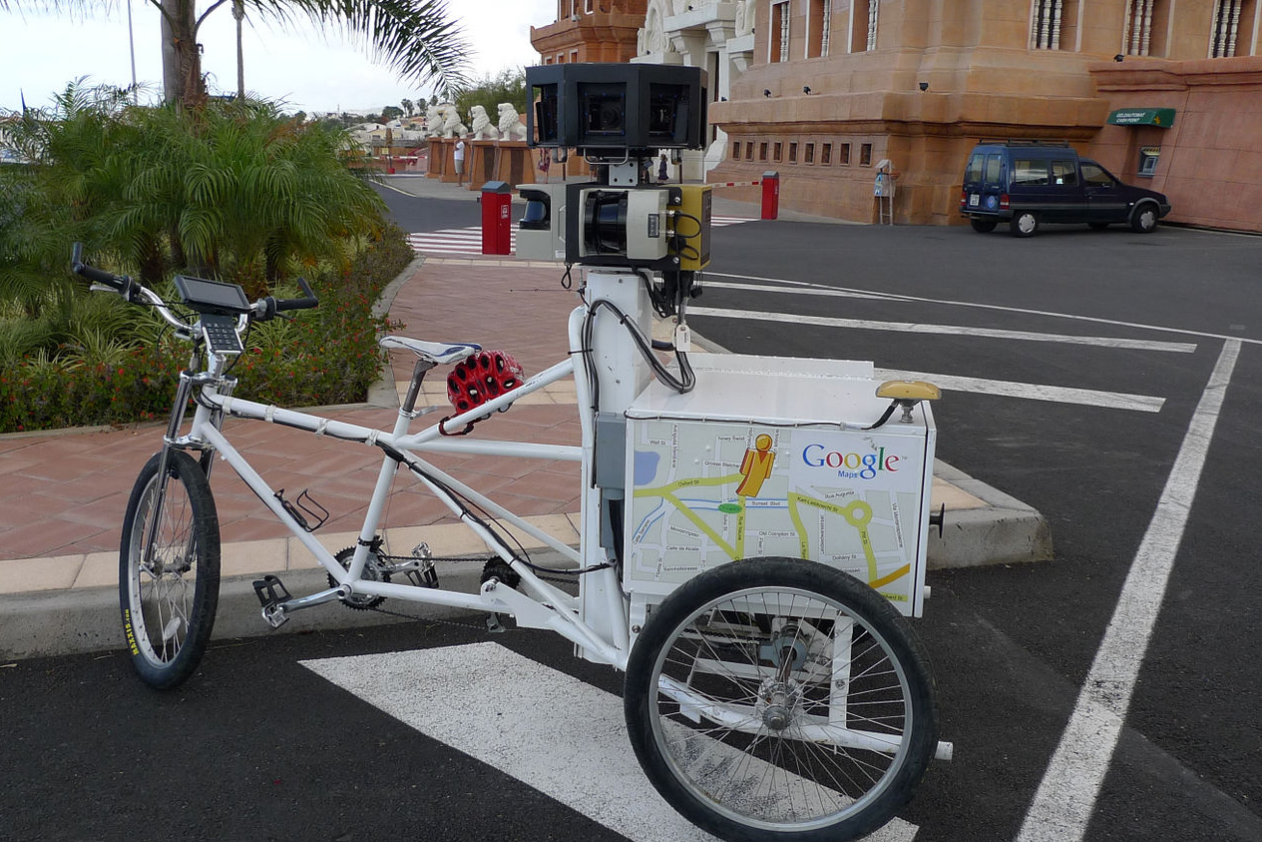 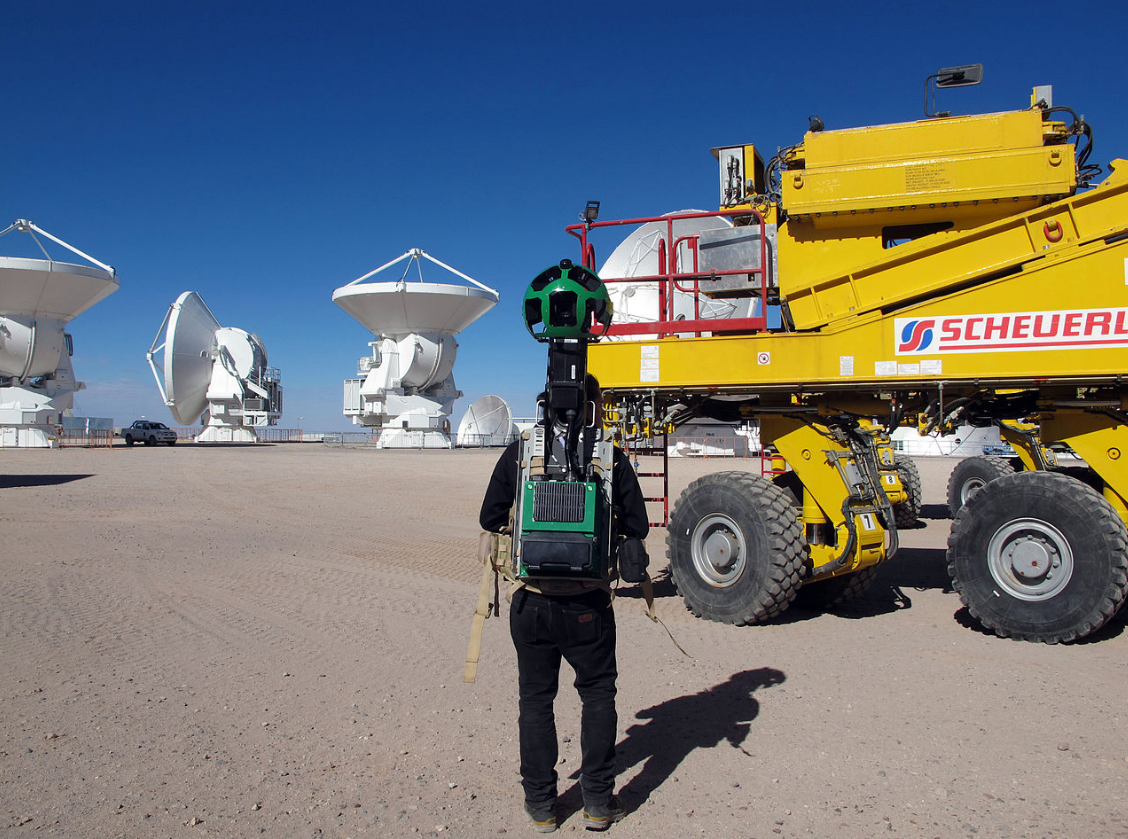 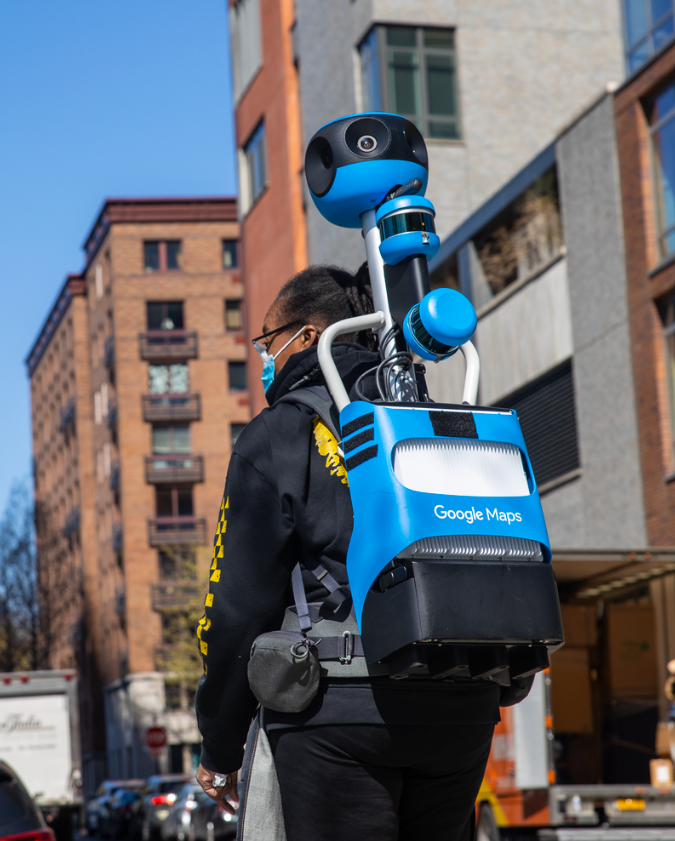 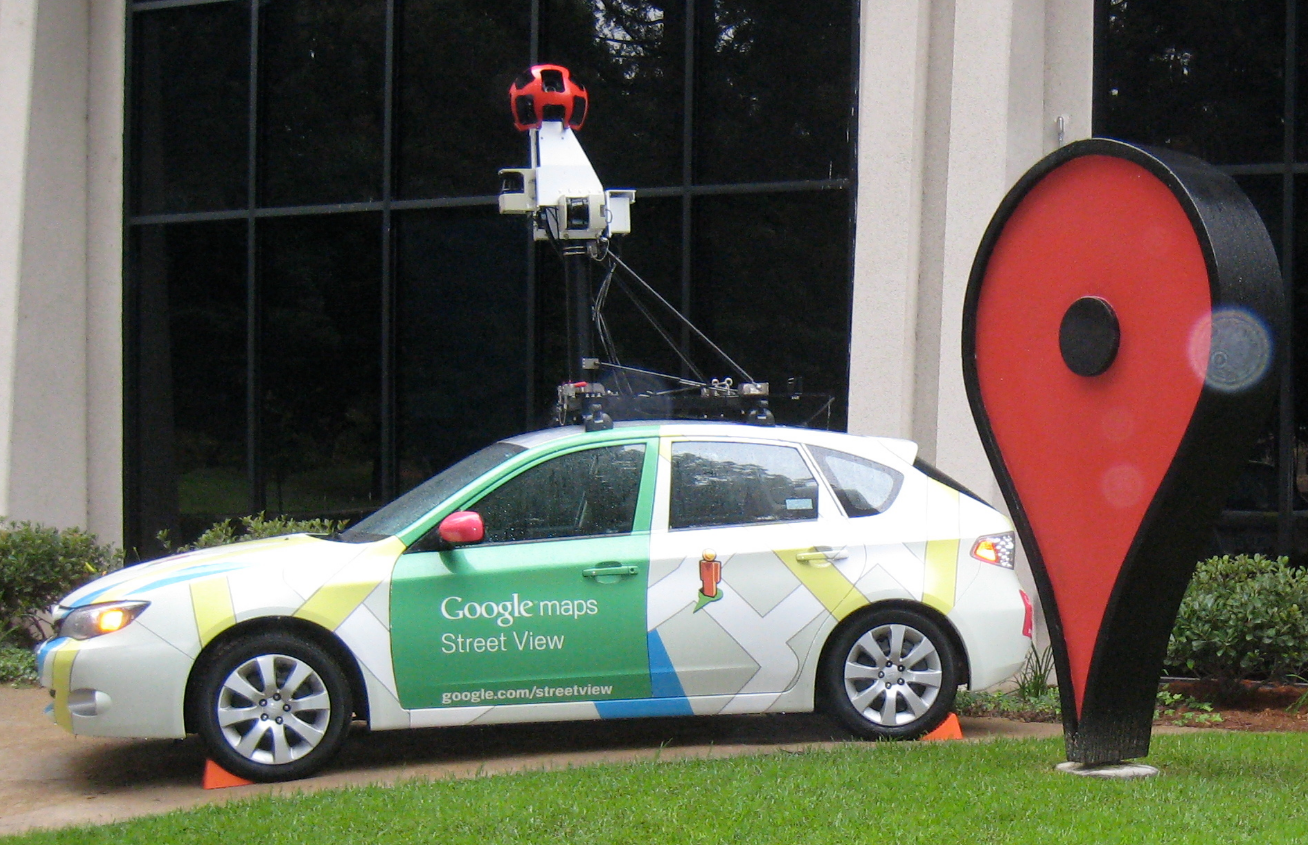 A Google Street View car showcased on the Google campus in Mountain View, California in October 2010

Google Street View will blur houses for any user who makes a request, in addition to the automatic blurring of faces and licence plates.[43] Privacy advocates have objected to Google Street View, pointing to views found to show men leaving strip clubs, protesters at an abortion clinic, sunbathers in bikinis, and people engaging in activities, visible from public property, which they do not wish to be seen publicly.[44] Another concern is the height of the cameras, and in at least two countries, Japan[45] and Switzerland,[46] Google has had to lower the height of its cameras so as to not peer over fences and hedges. The service also allows users to flag inappropriate or sensitive imagery for Google to review and remove.[47]

Police Scotland received an apology for wasting police time in 2014 from a local business owner in Edinburgh who in 2012 had staged a fake murder for the Google camera car by lying in the road "while his colleague stood over him with a pickaxe handle".[48] In May 2010, it was revealed that Google had collected and stored payload data from unencrypted Wi-Fi connections as part of Street View.[49][50]

The concerns have led to Google not providing or suspending the service in countries around the world.

6. Third-party Use of Images

Fine-art photographers have selected images for use in their own work.[61] Although the images may be pixelated, the colours muddy, and the perspective warped, the photographs have been published in book form and exhibited in art galleries, such as the work of Jon Rafman at the Saatchi Gallery, London.[62] In his personal appreciation of Street View material, Rafman sees images which evoke the "gritty urban life" depicted in American street photography and the images commissioned by the Farm Security Administration. He also invokes the "decisive moment" esthetic of Henri Cartier-Bresson "as if I were a photojournalist responding instantaneously to an emerging event".[63]

Michael Wolf won an honourable mention in Daily Life in the 2011 World Press Photo competition for some of his work using Google Street View.[64]

Mishka Henner was short-listed for the 2013 Deutsche Börse Photography Prize in November 2012 for his series 'No Man's Land', which depicts sex workers at rural roadside locations.[65]

Swedish programmer Anton Wallén developed a game called GeoGuessr, which places players into a Google Street View and has them guess its location.[66]

Canadian artist Sylvia Grace Borda worked in conjunction with John M. Lynch between 2013 and 2014[67][68] to insert the first staged tableaux[69] into the Google Street View engine. Their efforts won them the Lumen Prize in 2016.[70] Borda has continued independently to author in the Google Street View engine and in 2017 created the tableaux series the Kissing Project.[71]

More
©Text is available under the terms and conditions of the Creative Commons-Attribution ShareAlike (CC BY-SA) license; additional terms may apply. By using this site, you agree to the Terms and Conditions and Privacy Policy.
Upload a video for this entry
Information
Subjects: Computer Science, Interdisciplinary Applications
Contributor MDPI registered users' name will be linked to their SciProfiles pages. To register with us, please refer to https://encyclopedia.pub/register :
HandWiki
View Times: 97
Entry Collection: HandWiki
Revision: 1 time (View History)
Update Time: 28 Sep 2022
Table of Contents
1000/1000
Hot Most Recent