+1 point
Thank you for your contribution! You can also upload a video entry related to this topic through the link below: https://encyclopedia.pub/user/video_add?id=27485
Check Note
2000/2000
Effect of Physical Activity on the Circadian System

Circadian rhythms are an inherent property of all living systems and an essential part of the external and internal temporal order. They enable organisms to be synchronized with their periodic environment and guarantee the optimal functioning of organisms. Any disturbances, so-called circadian disruptions, may have adverse consequences for health, physical and mental performance, and wellbeing. The environmental light–dark cycle is the main zeitgeber for circadian rhythms. Moreover, regular physical activity is most useful. Not only does it have general favorable effects on the cardiovascular system, the energy metabolism and mental health, for example, but it may also stabilize the circadian system via feedback effects on the suprachiasmatic nuclei (SCN), the main circadian pacemaker. Regular physical activity helps to maintain high-amplitude circadian rhythms, particularly of clock gene expression in the SCN. It promotes their entrainment to external periodicities and improves the internal synchronization of various circadian rhythms. This in turn promotes health and wellbeing.

Circadian rhythms are an inherent property of all living systems and are generated by an internal clock. In mammals, this is localized in the suprachiasmatic nuclei (SCN) of the hypothalamus [1]. The SCN as central pacemakers are involved in the rhythmic regulation of sleep–wake behavior [2], locomotor activity [3], metabolism [4], body temperature [5], and other body functions.
Circadian rhythms are an essential part of the external and internal temporal order. They enable organisms to be synchronized with their periodic environment, to be prepared for rather than react to periodic changes and coordinate physiological and behavioral processes. This guarantees an optimal functioning, and any disturbances, or so-called circadian disruptions, may have adverse consequences for health, physical and mental performance, wellbeing, and longevity [6][7][8][9][10]. Such disruptions do occur during aging [11][12][13][14], following time-zone transitions [15][16][17], in shift-workers [18][19], and in subjects suffering from different diseases [20][21][22][23]. However, in the latter case, it is not clear if circadian disruptions are a consequence of the disease or a cause.
Therefore, it is highly important to find approaches to synchronize circadian rhythms and, thus, stabilize the entire circadian system. Melatonin, as an effective chronobiotic, is often used [24]. However, the physiological effects of melatonin depend critically on dosing and timing. For chronobiotic purposes, physiologic doses (3 mg or less) are useful, while higher doses (3–10 mg or more) exert antioxidant and immunoregulatory effects [25][26]. Optimal dosing may be different between individuals. Even more important could be a personal adjustment of timing, since physiological responses to melatonin follow phase response curves [27]. When non-physiological doses have to be used, one must consider adverse side effects. Accordingly, non-pharmacological approaches may be preferred, except, for example, in very old people where the use of melatonin might be unavoidable [28][29].
The daily light–dark cycle is the main zeitgeber [30][31]. It synchronizes circadian rhythms with the 24-h environment. In the modern society, however, most people are exposed to only low levels of light in the daytime. On the contrary, the light levels in the evening or at night are often too high. Both have adverse consequences for the synchronization of the circadian rhythms with the 24-h environment and multiple negative effects on physiology, sleep, physical and mental performance, and well-being [19][32][33][34][35].
Food can also serve as a synchronizer for the circadian system. Timed feeding may reset the SCN phase via a reinforcement of clock gene expression, entrain peripheral clocks, and facilitate intrinsic synchronization [36][37][38][39]. Thus, it can be used to strengthen the circadian system, which in turn promotes healthy aging and longevity [21][40][41].
Robust circadian clocks can also be facilitated by lifestyle, regular physical activity, and timed exercise. Aged people often adopt, although rather intuitively, a regular lifestyle [42][43]. However, a problem of the modern society is a general low level of physical activity [44]. This has adverse consequences for the cardiovascular system and the energy metabolism [45]. Moreover, direct effects on homeostatic physiological mechanisms and disturbances of the circadian system have a considerable impact. Scheduled physical activity is an efficient strategy to maintain circadian rhythms and contribute to healthy ageing [12][13][46]. It upholds feedback coupling with the central brain clock and helps to preserve synchronized circadian rhythms [10][47].

2. Physical Activity and the Circadian System

In humans, activity can be monitored easily over many days and at short sampling intervals by means of non-invasive devices worn on the wrist of the non-dominant hand [48]. This method is widely used in field research and in clinical settings, as it is simple, inexpensive, and rather accurate [49][50][51]. In laboratory animals, motor activity can be monitored by transmitters that are implanted into the peritoneal cavity and allowing the simultaneous recording of core body temperature [52]. Moreover, most reliable and less expensive are passive infrared motion detectors that are mounted above the cage roof [53]. Both methods record general activity, not just locomotion.
The wide use of actimetry monitoring techniques makes circadian activity rhythm assessment a useful tool to survey circadian rhythm robustness [54][55]. Moreover, rhythm characteristics can be used as indicators of physical and mental fitness and the health status of human beings. Vitale and co-authors [56] used actigraphy to characterize the activity level and the daily activity rhythm of patients following hip and knee joint replacement and designed specific, personalized rehabilitation programs.
The inter-daily rhythm stability and the median level of daytime activity were found to be negatively correlated with cognitive decline and depression in elderly women [50]. Other scholars compared the amounts of activity when in bed or out of bed. This can be a preferable option when the 24-h pattern is non-sinusoidal. The estimated dichotomy indices were decreased in diseased individuals, particularly in those suffering from colorectal cancer [51][57]. Together with the mean activity level and autocorrelation coefficients, they are an objective indicator of physical welfare and an appropriate prognostic factor for cancer patients´ survival and tumour response [58][59][60]. According to Hoopes et al., characteristics of the rest–activity rhythm, especially the inter-daily stability and intra-daily variability, can be used as biomarkers of cardiometabolic health [61]. Irregular sleep duration and timing were recognized as novel cardiovascular risk factors, independent of other traditional factors and sleep quantity or quality [62]. An increased fragmentation of the 24-h activity rhythm is also positively associated with symptoms of food addiction [63]. Differences in the period length of the free-running activity rhythm were found in spontaneous hypertensive rats as compared to healthy controls [23]. Remarkably, changes occurred in the pre-hypertensive state already and not after the surgical induction of hypertension. In glaucoma patients, the sleep–wake rhythm was found to be compromised [64].

Worldwide, a high percentage of people is physically inactive, especially in high-income countries, and this percentage increases with age [44][65]. The scarce physical activity of elderly people is at least partly caused by sarcopenia, though its progression can be reduced by regular exercise [66][67].
Physical inactivity is one of the most important factors causing lifestyle diseases. It substantially increases the risk of adverse health conditions and shortens life expectancy. Particularly, the incidence of coronary heart disease, metabolic diseases such as obesity and type 2 diabetes, and also breast and colon cancers has been shown to be elevated. Accordingly, a physically active behavior could improve health and has a protective effect on the development of diseases [45][68][69]. The improvement of methods to record physical activity might help to develop programs to enhance activity levels and, thus, reduce the risk of non-communicable diseases.
Regular exercise helps to prevent cardiovascular disease [70], stroke [71], cancer [72], diabetes, and obesity [73]. It also has positive effects in patients suffering from neuropsychiatric disturbances. Aside from psychological mechanisms such as improved sleep and stress reduction, neurobiological mechanisms such as changes in neurotransmitter concentrations are also involved [74][75]. Exercise can prevent the development of stress-related mood disorders such as depression and anxiety and promote self-confidence. Animal models were used to elucidate the underlying mechanisms [76]. In Syrian hamsters, voluntary exercise promotes resilience to social defeat; animals are less anxious and show less defensive/submissive behaviors [77].
Physical activity positively influences cognitive function in patients with dementia, i.e., it decelerates the cognitive decline [78][79]. Experiments in rodents revealed that physical exercise regulates hippocampal neurogenesis, especially if it is performed in the context of cognitive challenges, and reduces learning deficits [80][81][82][83][84].

2.3. Effects of Motor Activity on the Circadian System

It has been well known for many years that motor activity has a considerable impact on circadian rhythms, via a feedback effect on the central pacemaker, the SCN. A correlation between activity level and the period length of the rhythm generated in the SCN was found [53][85][86]. Intensive running wheel use also affects photic phase responses [87][88][89]. Bouts of physical activity may cause phase changes—so-called non-photic phase responses. Depending on the circadian time, activity bouts may cause a phase advance or a phase delay. Mrosovsky first published a non-photic phase response curve [90]. In Golden hamsters for example, a bout of motor activity in the middle of the light time, i.e., during the subjective day, causes a phase advance. The animals’ next activity period starts earlier, i.e., the animals “wake up” and “go to sleep” earlier. Similar effects were described for humans [91]. One hour of moderate treadmill exercise for three consecutive days caused significant phase changes of the urinary aMT6s rhythm, the metabolic end-product of melatonin.
Motor activity and behavioral states may directly influence the neurophysiological properties of the SCN and affect clock genes expression [92][93][94][95]. This may be the causal reason for the above-mentioned changes in photic phase responses and free-running periods.
In humans, personalized timing, duration, and the type of exercise should enhance its benefits, particularly for cardiovascular health [96]. Evening exercise might be less beneficial [97]. Moreover, benefits may vary depending on chronotype [98][99], or when metabolic circadian rhythms are compromised in diseases such as diabetes [100]. Overall, considering the timing of exercise can be important in performance and disease contexts to improve circadian alignment and health status as a therapeutic and preventative strategy [101].
In humans, physical activity closely associates with time spent outdoors [102]. Time outdoors was a factor of higher physical activity during COVID-19 mandated lockdown [103]. It was also linked with better sleep, a higher quality of life, and less pronounced phase delay, which was common during lockdown for the majority of the population [103]. It this context, it should be outlined that outdoor activity is related to outdoor light exposure, and these factors act together in facilitating circadian alignment and robustness. Overall, more outdoor time can be linked with a more active lifestyle and lower chronic disease risks [102][103].

Physical activity has a strong impact on circadian rhythms, Figure 1. In rodents, it has been shown that voluntary access to a running wheel helps to maintain the high-amplitude circadian rhythms of clock and clock-controlled genes in the SCN. Similar effects can also be expected to occur in humans. As a consequence of high-amplitude circadian rhythms in the SCN, their rhythmic output that controls overt rhythms and peripheral oscillators is strengthened. Proper internal and external phase relationships can be established, and a circadian disruption be abolished [104][105]. This reduces the risk of diseases. 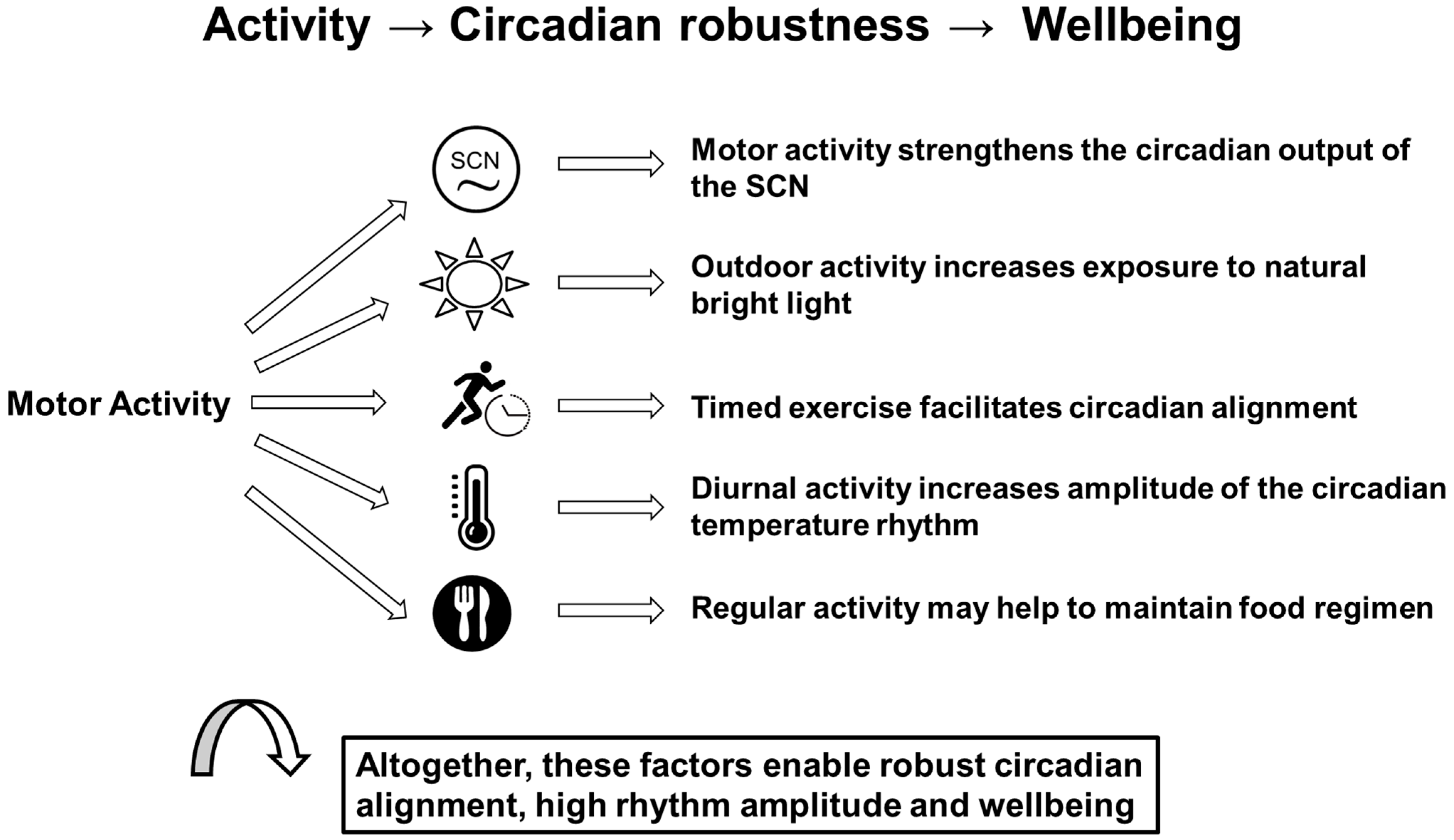 More
© Text is available under the terms and conditions of the Creative Commons Attribution (CC BY) license; additional terms may apply. By using this site, you agree to the Terms and Conditions and Privacy Policy.
Upload a video for this entry
Information
Subjects: Public, Environmental & Occupational Health
Contributors MDPI registered users' name will be linked to their SciProfiles pages. To register with us, please refer to https://encyclopedia.pub/register :
Dietmar Weinert
,
Denis Gubin
View Times: 212
Revisions: 2 times (View History)
Update Date: 26 Sep 2022
Table of Contents
1000/1000
Hot Most Recent